My God he does a lot of work for this site. I don’t know what his role really is, if he’s paid or doing it out of pure love it. As an occasional contributer, this is the first place I come to looking for answers & thanks to oojason organizing & indexing things…it’s way easier.

It boggles the mind how much info has been organized. So Hats off to this Juggernaut. Get some sleep!!

Has anyone seen a good sized & clean copy of the old Topps star Wars Poster? You know the one that had scenes of the movie on one side & you combined them to for a poster like this… 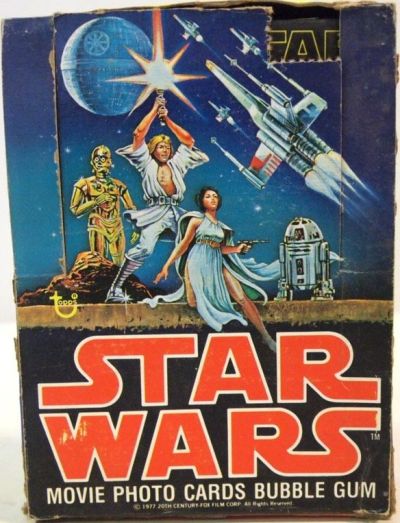 If not, I guess I’ll have to Photoshop one??

Don’t know if this has been discussed before, but it’s always intrigued me. In Star Wars IV when Obi wan is talking to Luke, right after Obi-Wan gives him the lightsaber, Alec Guiness has this “hesitant” look about him when Luke asked him how his father was killed. It’s @ 31:53.

However it was accomplished, I’ve always thought, WOW…when you look back & pay attention to that micro second, that look on Alec Guiness’s face…it’s like he knkew something no one else did?

I don’t know all the lore, so I don’t know if Lucas had “fleshed” out the whole story when it came time to shoot this scene. I recently saw an episode of the Graham Norton Show with the cast of the Last Jedi & Mark Hamill told the story of shooting the Empire scene where Vaders tells Luke he is his father…that on Set the line actually said was…“Obi-Wan Killed your father”. it wasn’t until after that scene he was told by Director Kershner what the line was really going to be (post production and that only Mark, Lucas & Kershner knew this.

So this got me thinking about the Obi_Wan scene in Star Wars IV.

Darn, since there’s NO forum search & Google didn’t pick it up I assumed no one asked. Thanks for the FYI!

Okay, we all know the 1977 Star Wars has undergone a ton of changes over the years. But what would be the correct title to use when you want to refer to the Original Theatrical release? I know it only said Star Wars no episode or title, but now what’s right??

Thinking about it, what’s the best way to entitle a disc?

This may hopefully be of some use to you:-

I think that might work? I will give it a try on weekend! As usual, the Yoda Master shines the light.

Okay, I downloaded SW 2.7 a while ago from tehparadox…that’s how long ago (RIP Paradox). As I recall I used JDownloader & downloaded 8 Rar files, then had JDownloader extract the files & it created a Star Wars Despecialized 2.7 AVCHD Folder with a BDVM file.

I remember the AVCHD rar’s ver 2.5 creating a .iso file which I used Toast to burn onto a a DL DVD & that created a BDVM & the certificate Folder. But what the heck do I do with Ver 2.7 BDVM file??? Using TOAST??? Anyone? Have a clue?

I was thinking of using Toast to burn the BDVM file with the a DVD ROM UDF setting.

I don’t get how someone can be asking HOW to get/make the Despecialized versions in a Thread under the topic of DVD Covers, Disc Labels, and Other Fan Artwork. ARTWORK. Then seemed surprised that they don’t get an answer?

Hard work & perseverance…that’s how. You think someone is just gonna give up the goods? If it were that easy, EVERYONE would have a copy! Besides, even when you get to the link, downloading & creating the mkv’s or AVCHD’s is another arduous process!

We all have to pay our dues…that’s the Price for having the Despeciaized Versions.

Thanks crpl_hicks, textless would be great!  JEDIT: Though you don’t need to post it in four different threads :)

I found a poster of the same image a while back:

Someone suggested I do…just to cover all the bases?

Thought I’d share, if anyone wants, the Back Album cover of the OST of Star Wars '77 of vader & a star field. I could never find a good one, so I scanned & made one. Have one without text if needed? Not sure if it “qualifies” as Hi Res?

Well this is what I have so far…I’ve never been crazy about the Return Posters…so I’m looking @ making something different? Still reworking the backs…

Ahhh someone already beat me to the punch! But yes…that is what I’m looking for. The 2nd & 3rd link you posted are EXACTLY what I need! Thanks…How do you find these?? Are you a magical Wizard?

In fact I may use this one as the “anchor” for all Three. Just some work and put the Chapter Titles where it says EMPIRE…

I’ve been working on a Cover that incorporates the old Kenner “race Track” design on the toys. Here’s what I’ve got so far…

The Race Track fill isn’t exactly the same…gotta work that out.

Just a couple of Notes. First I give a lot of credit to FranKT for the use of his lightsabers for the insert of the Carrying Case Set. FrankT really inspired me.

Secondly, I would say I just assembled pieces I have found on the internet into an idea. Example the Transfer Case, I got from gleaming this forum…

Third…it goes without saying that I intentionally made the “mistakes” on the Transfer case to make it look like someone had changes their minds on what the films should be called & that it has seen better days, being tossed around!

I’m not as Creative as others, but I tried to create something unique & not too cluttered. I will say the Black Set is “bullet Proof” I might have used a little too thick card stock! LOL

Again thanks for the kind words.

Bolstered by the Kind comments of oojason, I’m posting some of my “creations”. Believe me, compared to what I have seen, mine are amateurish @ best. but @ least I have the satisfaction that I made it & it’s 1 of a Kind! Sorry for the sizes…too much effort to resize! I am disappointed with Photobucket. 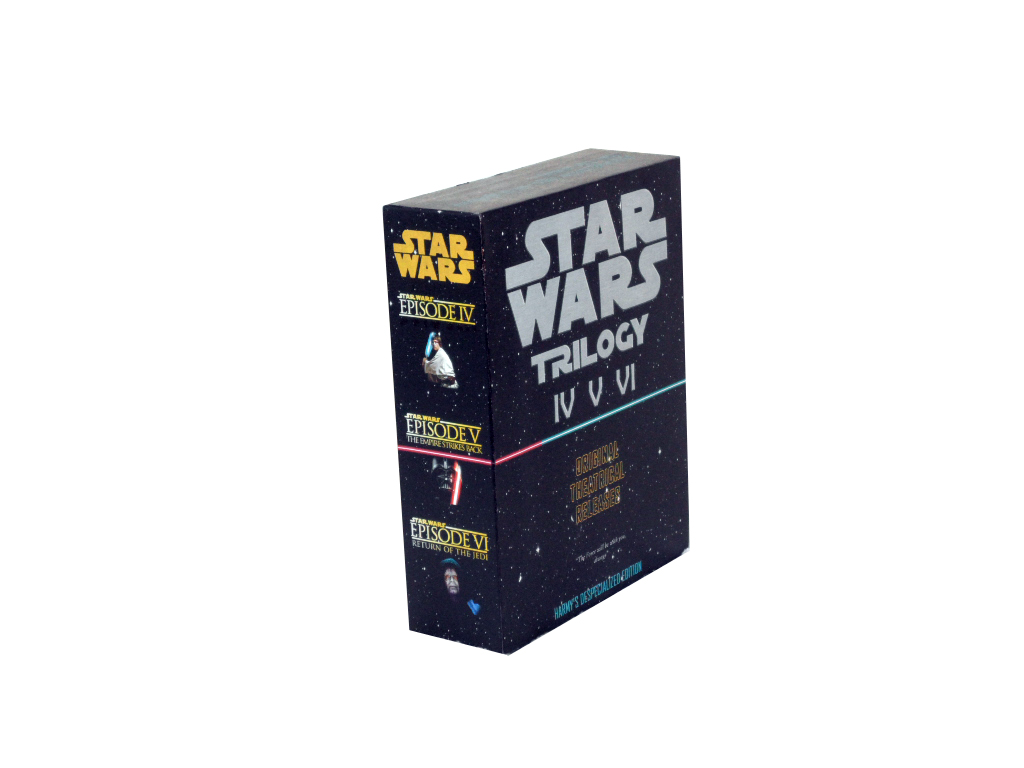 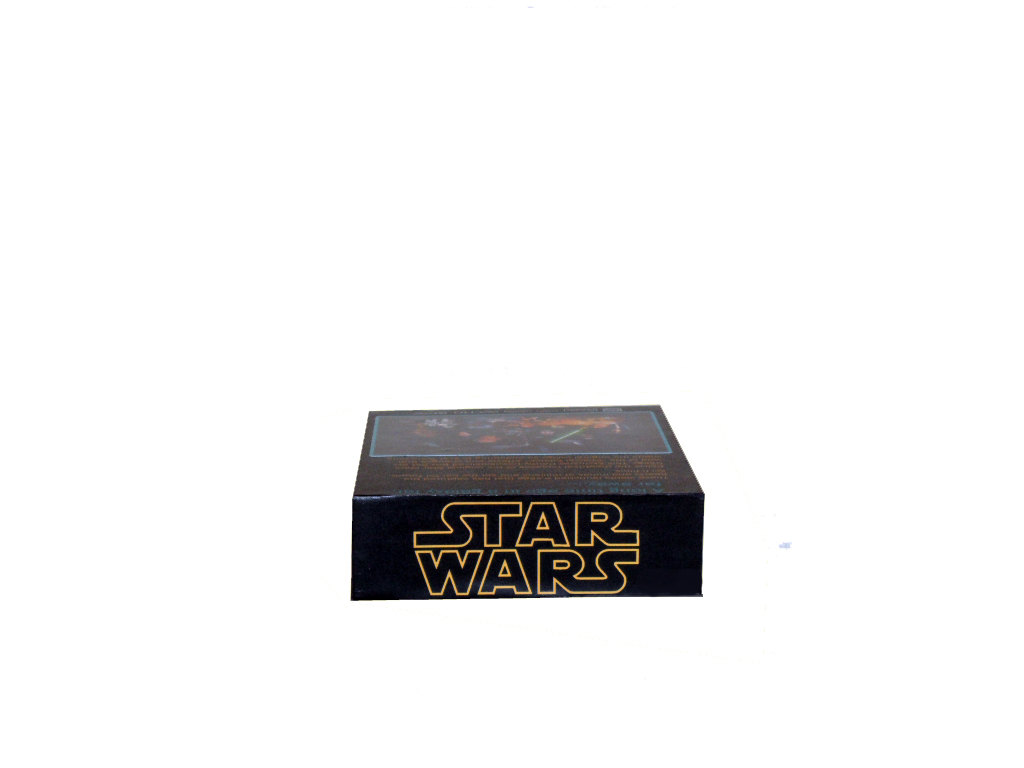 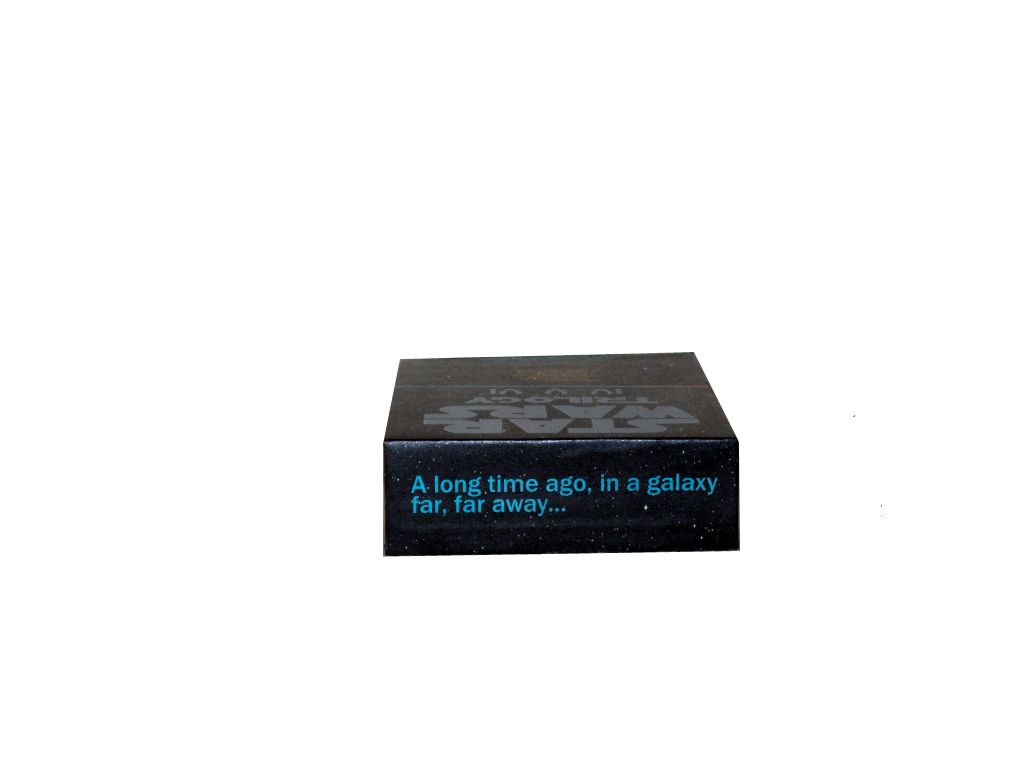 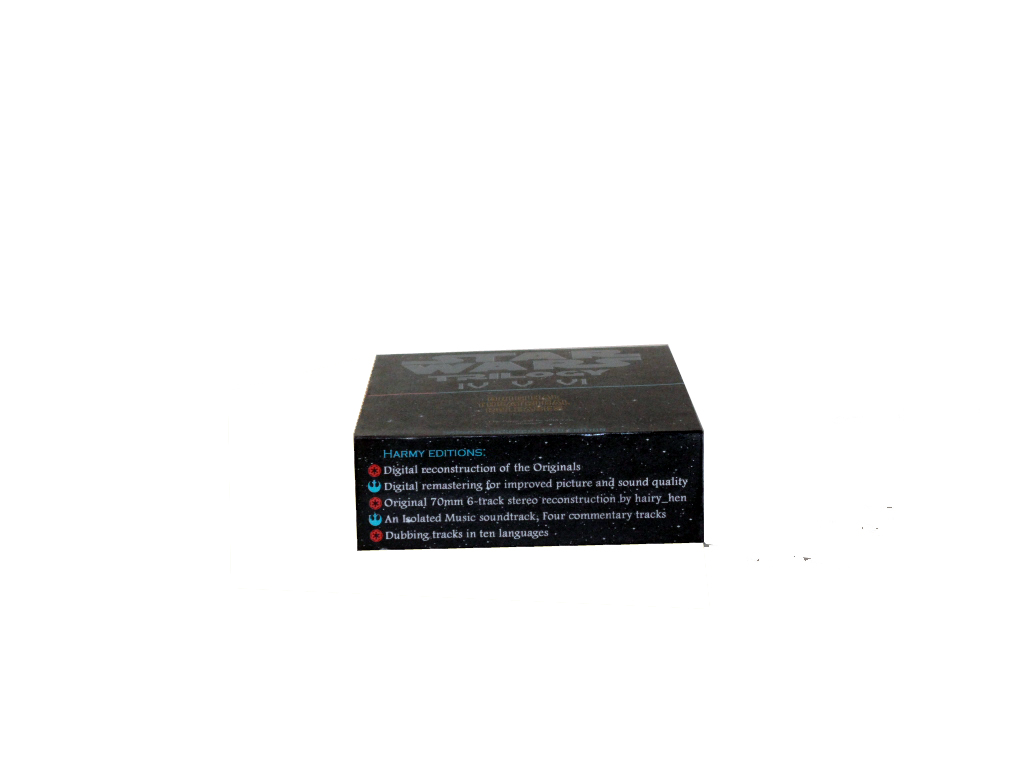 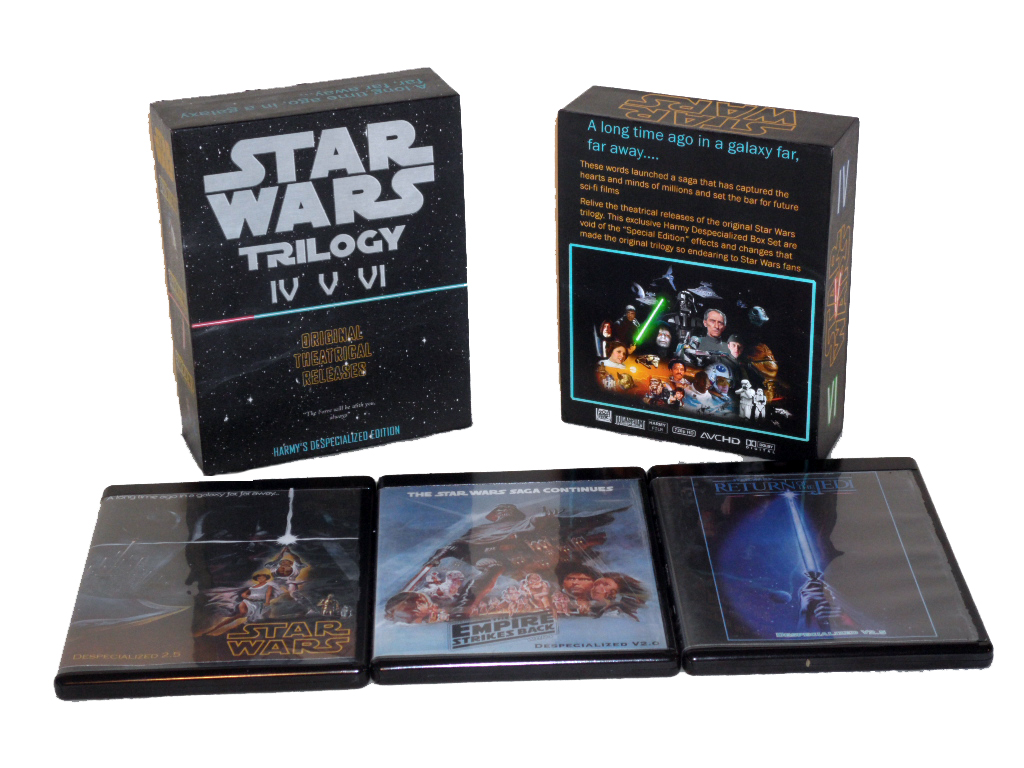 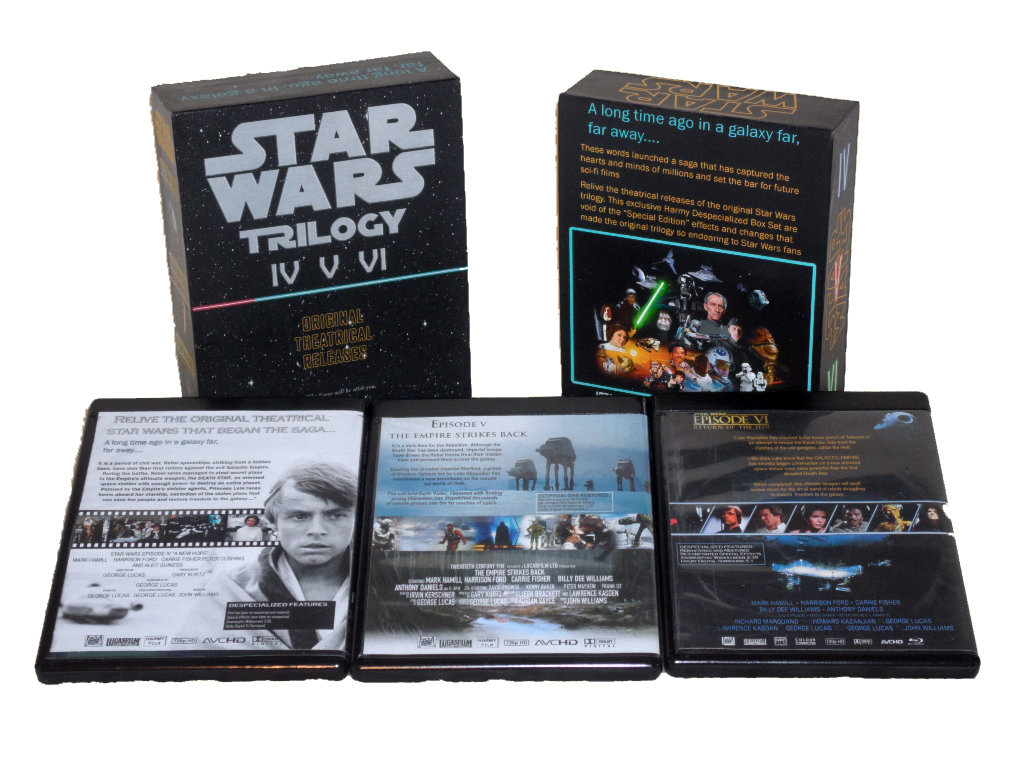 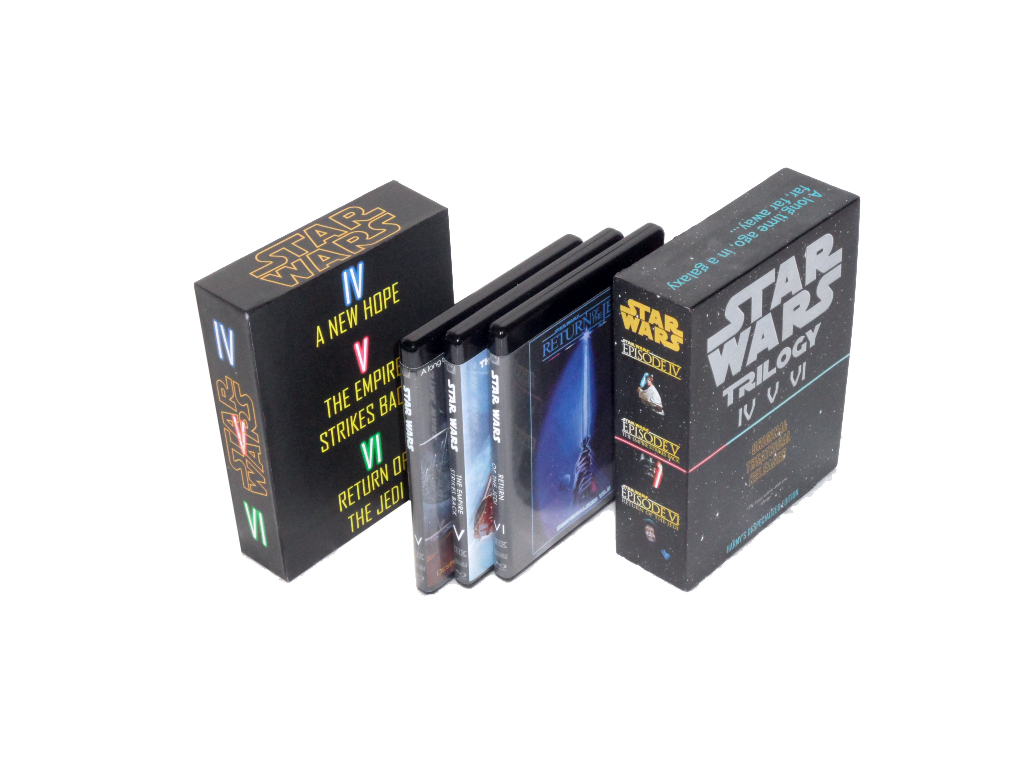 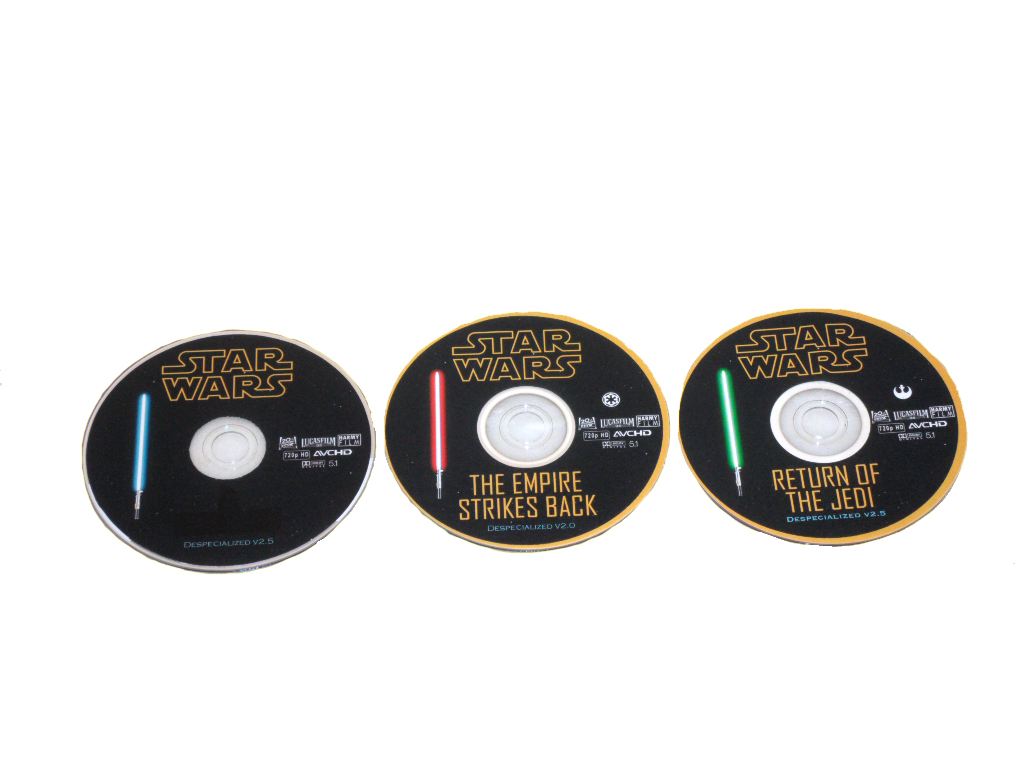 I was going for the look of something they might have Shipped the movies in? Old school Reels. 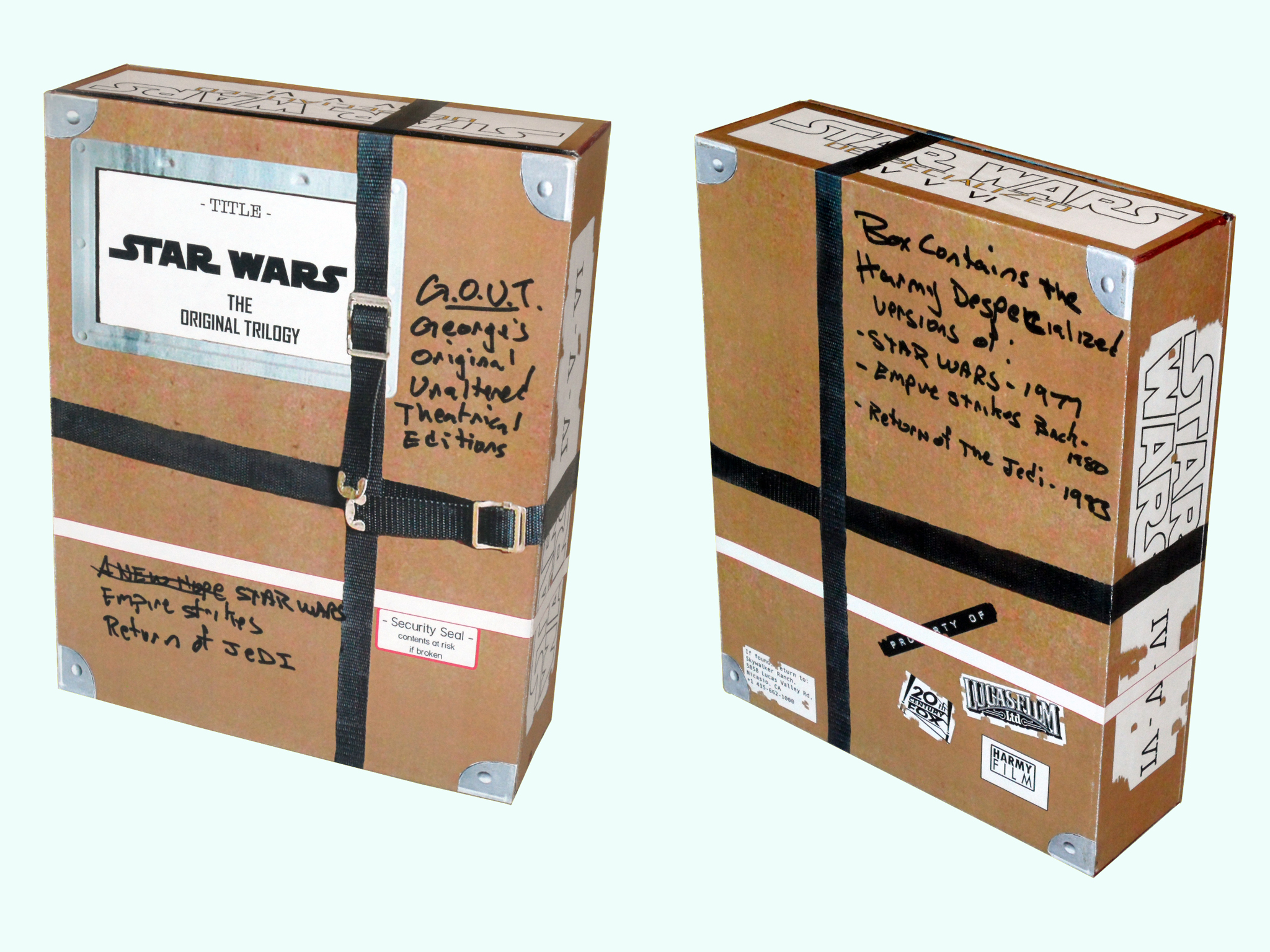 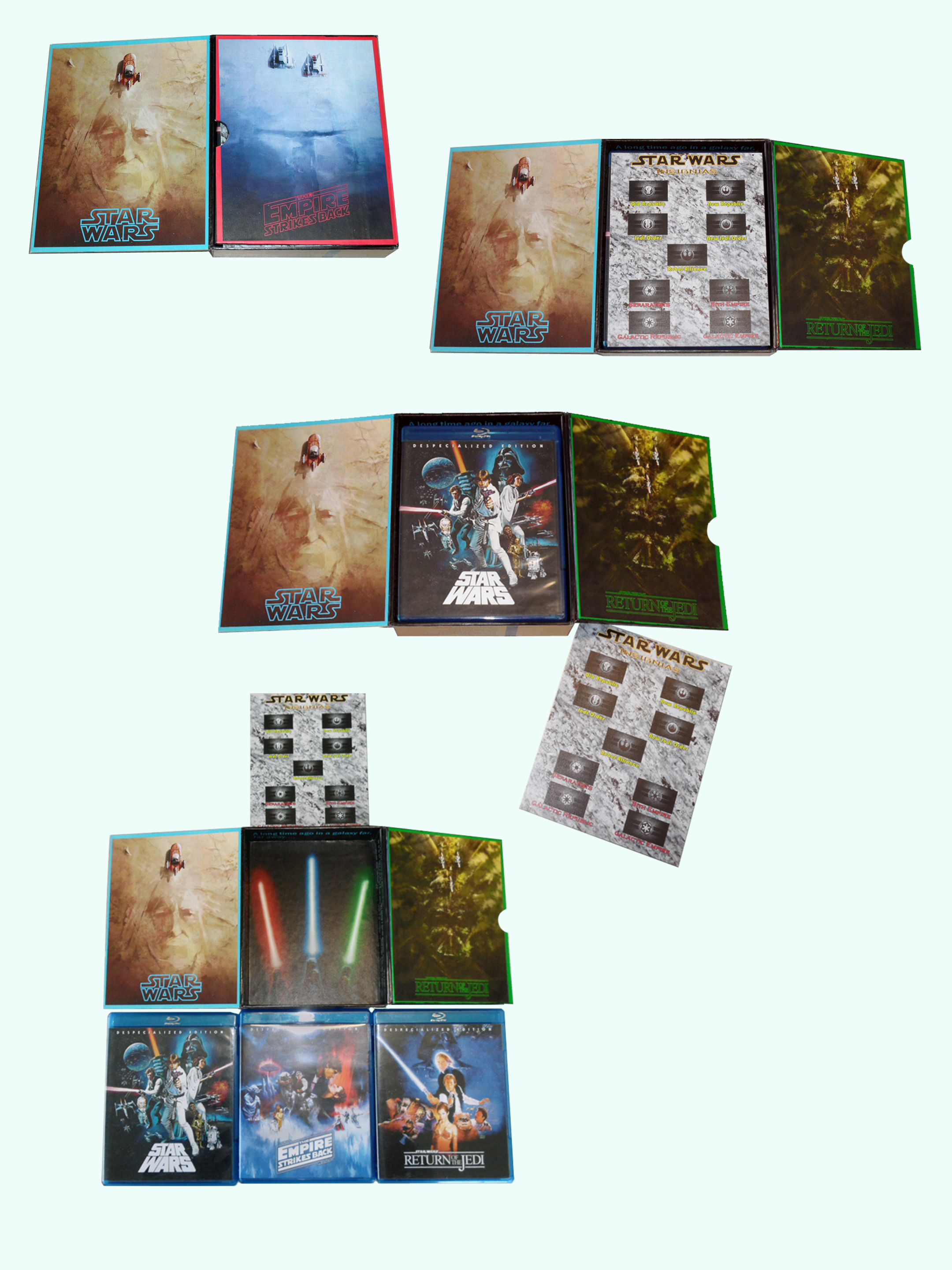 I feel honoured & humbled to be listed in such a talented group of visionary creators & Artists! I have since enhanced my Box set & even made another. I actually took the time to take more decent photos & might try to upload some?

Kudos to you SIR for taking the time & effort to compile such a huge listing.

I figured it out. The Simplicity is Elegant!

For whatever reason I do prefer your “simple” Trilogy Box set. Not that there’s anything simple about it. But it’s Clean design really brings out the titling and Impact?? I dunno…this set & Frank’s Arrow White Box design’s set the Bar for me! Oh & also Frank’s Lightsaber set…again Simple & to the point!

Excellent work. Now if only you could have a Holographic projection where the Front “Window” is when you lay the set down. That would be fantastic. Let us know when you got that one solved!

Quick note: On my “Box Set” I made the Stupid Mistake of putting A New Hope to Star Wars Title! Doh Rookie mistake! I noticed your’s just says the Correct 1977 Star Wars Only. Well done…clap clap

oojason’s idea of “reusing” an existing box set is an Excellent idea! You can get one dirt cheap @ a Pawn shop, like $5? The recover it with your own designs. I wish I would have thought of that before I make my box sets.

Getting the printout on a large enough paper to glue to the whole box in 1 piece was the tricky part. I used Bristol Board? Depends on how rigid you want the end result to be? Keep in mind the thicker it is the harder to cut & bend.

The nice thing about making your own is once you figure it out, you want to make another, then another!

My first set has a box within a box, my 2nd set was made to look like an old style Film shipping box, with straps. 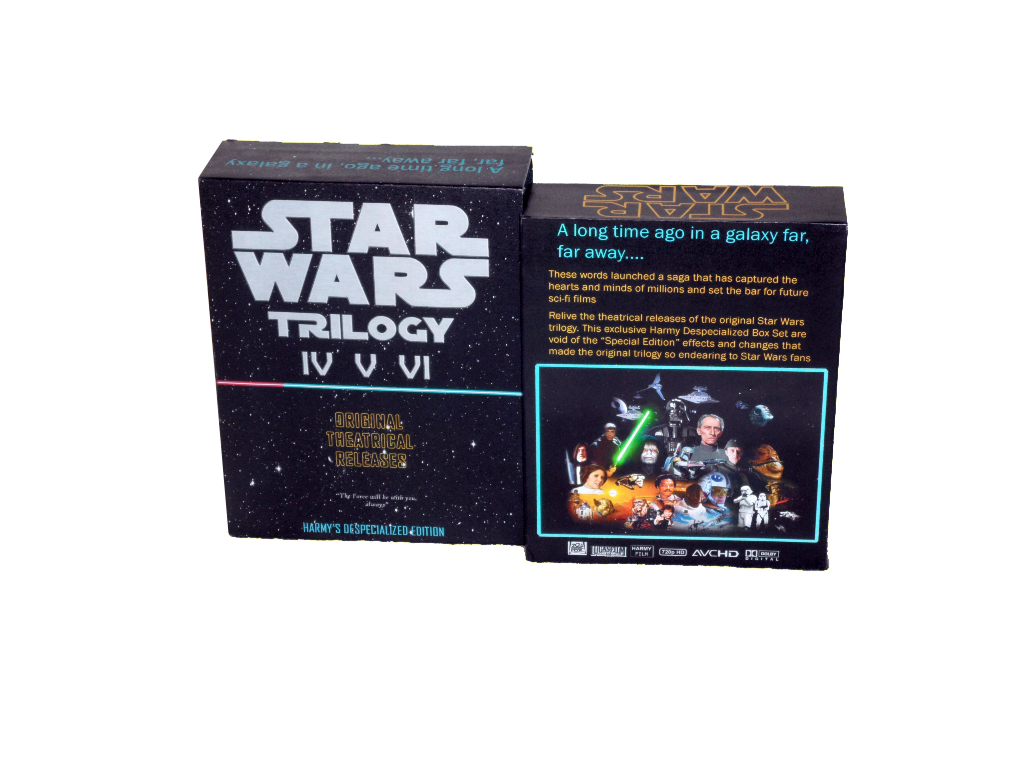 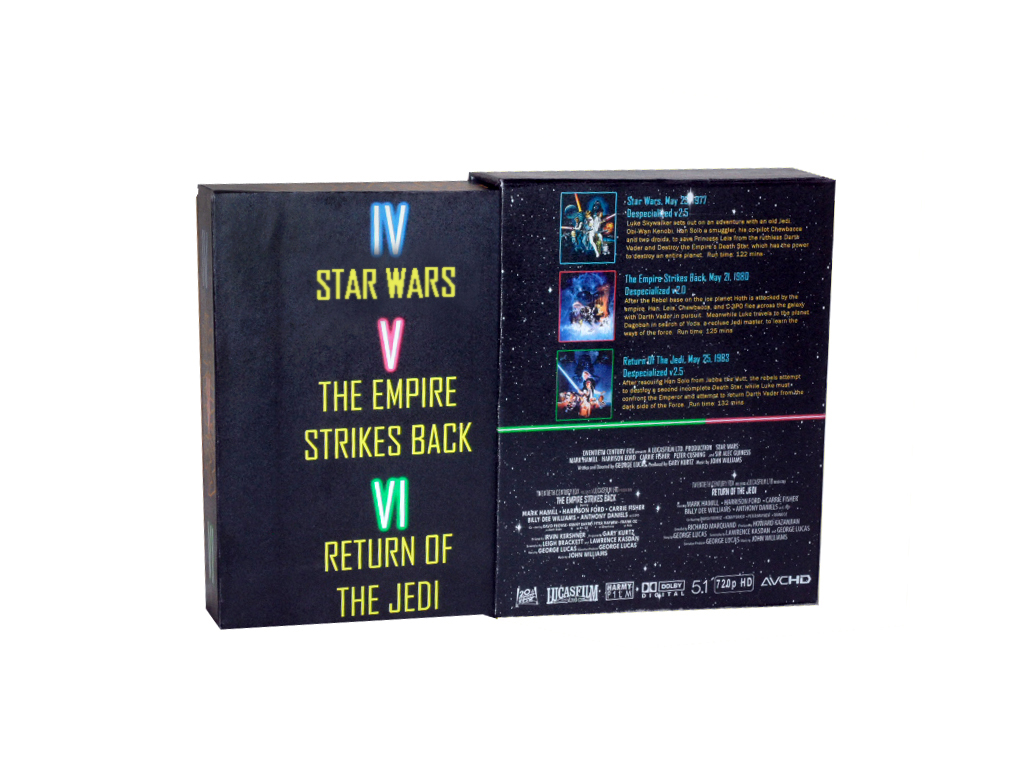 Okay…I see what yer doing…NOT falling for it my friend!

I’m not that new. Yes I have seen people give the big FU, but over their artwork or opinions about artwork in the DVD covers section. I just hate when things get off topic & replced with name calling to the point where you wonder…what were we talking about??

Though I would Chime in…

1st off…Everyone Please get a grip. Let’s NOT degrade ourselves to the kind of language other Forums/threads “de-evolve” to!

2nd, I don’t know where this poster originated, but since I have seen it around & in various incarnations, I assumed it was somewhat “authentic/official”? Not Lucas or Disney property official, but more than a Fan Creation?

But I guess if it was “OFFICIAL” maybe then Sir Alec Guinness would be on it?