It's been quite a while since I've been on here, but believe me, all of you stayed in a very special place in my heart.

Just kidding. I was making friends.

My first avatar is the one I have now.

There was only one thing wrong- George Lucas apparently snuck in the CGI shot of the truck going over the cliff in the chase.  When I saw that I was livid.  It took me about 5 minutes to get over it.

Sometimes the mind can be deceiving, because when I went to see it today, they used the original shot of the truck going over the cliff. I know this for a fact, because I made it my primary mission to check to see if they had kept with the cg version or not. They didn't, which was a relief.

Anyway, I saw the film today, and it was one of the best movie experiences I've ever had. I think it sounded fantastic, and overall the picture looked pretty stellar too. But that didn't really seem to matter too much to me at the time. The fact was, I was seeing Raiders of the Lost Ark in a theater, which I have wanted to do since I first saw the film when I was six.

Since I haven't seen really any classic movies in a theater, mostly due to my age and where I live (Wyoming), this was a rare treat, which made the experience even more awesome.

By the way, what did you guys think of the Struzan-ish posters?

You mean you won't even go just to see Raiders in theaters again?

...In other words, I haven't missed anything. This is what I think about school starting on Tuesday. Thanks Paint.

Nice pics.
They remind me of that Coke bottle flic

Oh yeah, The Gods Must be Crazy.

Would anybody actually watch this show on a regular basis?

Not a bad movie there, but his magnum opus is undoubtedly Tenenbaums.

Tenenbaums and Life Aquatic are usually pretty tied for me, but considering that Life Aquatic has the Bowie soundtrack, it wins by a small margin for me...


Since I haven't posted or been online in nearly a month, somebody should fill me in on everything I've missed.


Welcome back! You should really plug your tumblr. It's got some neat stuff.

I guess I should. I have a lot more to upload, so I'll keep you posted with every new picture I find is worth sharing.

I suppose this would be a better place to post my pictures. I'm assuming that nobody will be offended by tribal nudity, but if you are, let me know and I can take them off/censor it. One of my Namibia pictures. If you can't tell, those are giraffes way over there.

Since I haven't posted or been online in nearly a month, somebody should fill me in on everything I've missed.

I bought the Criterion for 2 bucks yesterday

You theif, you! Good find for that price.

Thanks man. If you know where to look, there's a chance you'll always see something. I bought the Criterion for 2 bucks yesterday, so I decided to give it a shot. It was pretty good. It definitely had the quirkiness and surrealness that exists in every Wes Anderson film, but since this is an earlier one of his, the surreal factor is a lot less prominent than say, Life Aquatic.

It certainly wasn't as good compared to what Wes has gone on to direct, but for what it was, I enjoyed it for the most part.

2001: A Space Odyssey (it seems most people agree on this one)

We bought some tickets today, and me and my friend are going all the way down to Denver to see it. Seeing Raiders in a theatre has always been a dream of mine, so seeing it will certainly be a very thrilling experience for me.

I leave to go to Namibia in about two days.

I don't think shooting movies on film is going away anytime soon. Spielberg and others still have the weight to get their way on that for now.

Not to mention directors who use it for artistic purposes like the article said, or find film more aesthetically pleasing than digital.

I'm glad you asked, AF. I know that I'm apparently one of the few people who actually liked Prometheus, which surprised me, because I thought a lot more people did.

I do have to agree with you on editing. It was a little uneven at times, like you said. But it wasn't too big a deal for me. I went in expecting something fun and "Alienish", and that's what I got. Maybe I was anticipating a lot less than you guys were, or something else along those lines. I barely watch TV anymore, so I didn't see too many trailers, which is another thing that seems to be coming up in reviews: that the trailers gave too much away.

Plus, the last few movies I have seen in theatres have been real stinkers, so it really elevated this movie for me, in terms of enjoyment.

Maybe after my excitement over a brand-new alien film is over, I may start to see more of it for what it is. As of now, however, I genuinely find it to be a good movie.

So someone found a little slip up: Wow, I can't believe nobody noticed that. 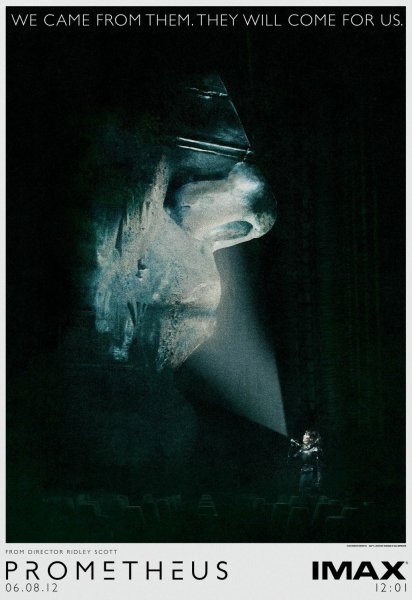 I really, really, liked it. While it was not quite as intense as Alien, it did come pretty close. Noomi Rapace did a great job as the protagonist, and the "surgery" scene was very well-paced and edited. Micheal Fassbender played David really well. He was probably my favorite character. I was really surprised by what the space jockeys really were. I always thought they were some kind of elephant creature. I liked how close it stayed to the alien universe. Such as at one point in the film when something causes David to spurt some blood. Not to be demented, it was satisfying to see that milky substance again, after so many years.

I enjoyed how you see many "precursors" to the xenomorph. I also enjoyed seeing more H.R Giger designs than Alien ever saw. I also liked how "organic" the space jockey's technology was. The special effects were also really well done. None of the CGI came across as very fake looking to me, in fact, a lot of it looked like a guy in a suit with makeup! I also heard somewhere that there was a little bit of practical effects too, so that might be another reason why it looked so good.

Overall, it had all the elements of an Alien film, and it won't dissapoint any fans of the series.

I like the David Bowie threads, all 65 of them.