Can’t wait to find out what this is about!

I rendered it in Sony Vegas and then used DVD Architect to author the disc image. I’m sure there are plenty of alternatives to these two but that’s what I used.

I’m curious what software or how you authored the VirtualDub .avi file to DVD?
I’ve followed most of the same procedures used by Tasjo for another project, teaching msyelf (and with some help from others) how to do a vhs preservation.
Thanks!

The Disney clips were cut from all home video releases, and even prints of SPFX.

16mm and Super 8 versions of The Black Hole and Mary Poppins were purchased to restore that segment, and a Youtube video of an unedited UK broadcast was going to patch Mark Hamill's narration.

I have two beta recordings of the original broadcast of SPFX if they'd be of any use in a preservation.

If you're using Firefox install the FlashGot add-on. I tried it out with the sound board and was able to download the mp3 files.

Just a little something I'm working on for the SWHS. The design was inspired by the binder and script that recently went up for auction. It's still a WIP and the text is just temporary. Any suggestions?

A little bit of an update. I contacted the current owner to ask about quality and this was the response:"I'd have to say it's a little wavy. It's watchable, but not pristine. But yeah, it looks like it's a couple of generations down." So is there still any interest in perusing this copy?

I think so. The waviness can easily be fixed with a Panasonic DMR-ES10.

True, unless it's embedded in from being so many generations down.

A little bit of an update. I contacted the current owner to ask about quality and this was the response:"I'd have to say it's a little wavy. It's watchable, but not pristine. But yeah, it looks like it's a couple of generations down." So is there still any interest in perusing this copy?

Keep in mind that this copy is not 1st gen but it should be much closer to the original source, therefore better than what is currently in circulation. Here is a quote from the previous owner of the tape, "I bought a huge lot of tapes from a tape duplicator seller from the 1980's and these are some of them. The quality is excellent on these tapes. I am sure all the tapes came from the original source."

I may have a chance at getting a complete, possibly low gen copy of a WBCS recording. PM me for details or if you want to help out.

I think we could have 2 versions of SWHS :

- the long cut 97min (without any publicities)

- WHIO v2 videos (unless a better source comes out)

- setting it to Zion Hybrid colors/luminosity

- adding the publicities in bonus or as a third release

- for the dvd menu maybe we could consider meco starwars disco remix which honestly rocks : https://www.youtube.com/watch?v=sWI2mPREHFQ

Then we could add subtitles in english/spanish/french/... for the main one + french on english passages for the long cut

I personnaly think some mkvs would be better nowadays than ISOs but both could be made.

I think we should start doing this without working on the image sharpness first which should be done in last after a "work" release since it'll require quite some try and errors (but it could be done by someone in the mean time.

At this point I have no plan of doing a V3 unless a better source for the commercials surfaces. While the Zion Hybrid is great, it was over sharpened in my opinion. As for matching the color and luminosity, keep in mind that the source for the Zion Hybrid was a second generation copy and the saturation and brightness are not true to the original source because of this. As for the rest of what's listed I think MediaMogul did an excellent job of combining the HD cartoon, rifftrax and Zion menus with the WHIO video.

Where did you find this copy? The French audio track on the second WHIO disc came from the only source of the French broadcast that I could find and the video quality was terrible.

A few months ago I found one of the 82 re-release commercials on VHS tape I bought at a junk shop.

Give me a few days and I can send you a better copy.

Edit: I also have a commercial for SPFX: The Empire Strikes Back if there is any interest.

Haven't perused old lots of Betamax tapes on Ebay in a while. They have gotten more expensive. Saw one that had the SWHS in the batch, (sadly over) but other auctions without such rare shows also got into hundred dollar territory. There seems to be more demand for old sporting events and news programs than ever, unless it's some archive with deep pockets going after these.

It's a total crapshoot if the tapes are actually playable, and still have what's written on the label of course.

I was bidding on that lot, but I didn't have a chance to check on it before it ended.  Given what the seller told me when I asked about it, the SWHS tape was likely a second or third gen copy.

I also can't believe the amount some lots are selling for. Either they get bid through the roof or the sellers start the bid at some crazy amount. From my experience I've actually found better recordings in the cheaper lots I've bought than some of the more expensive ones.

I spent quite a while trying to determine exactly what kind of computer keyboard the Wookiees are using for the family terminal that looks a bit like a TRS-80.  In the end, it didn't resemble anything exactly that I found, so I think it was either something amazingly obscure (and I looked at some pretty obscure ones) or it was some kind of composite cobbled together from various things.

I actually have one that I just removed the label from and it has the same covering over the reels as the prop. 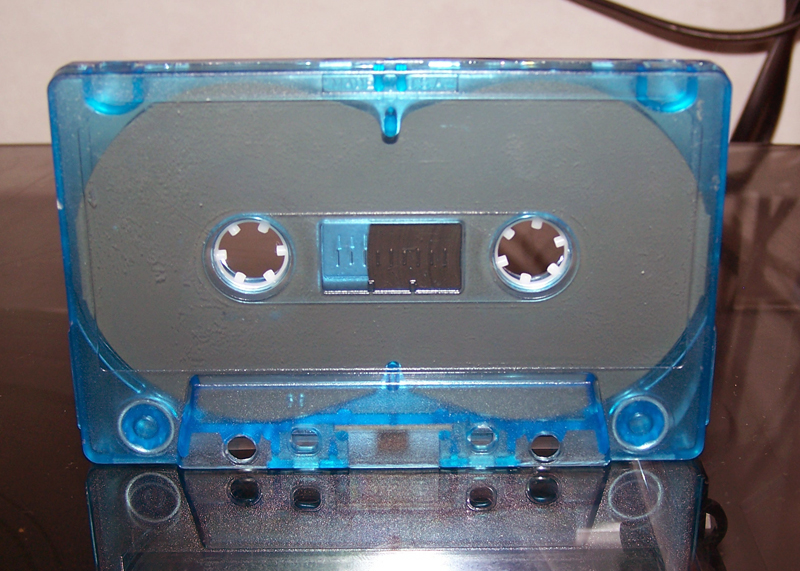 I'd really like to figure out what Lumpy's viewer was made from. It looks like it could be a modified portable 8 track player, but I don't know what brand it could be.

I recently noticed that the "cassette" with the holographic circus that Itchy takes off the shelf is just a regular cassette tape with the labels taken off. The closest match to the original tape that I can find is the Scotch Highlander. 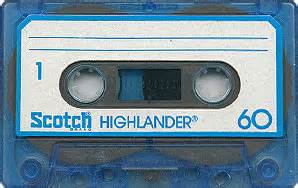 And the best screenshot I could get of the original prop 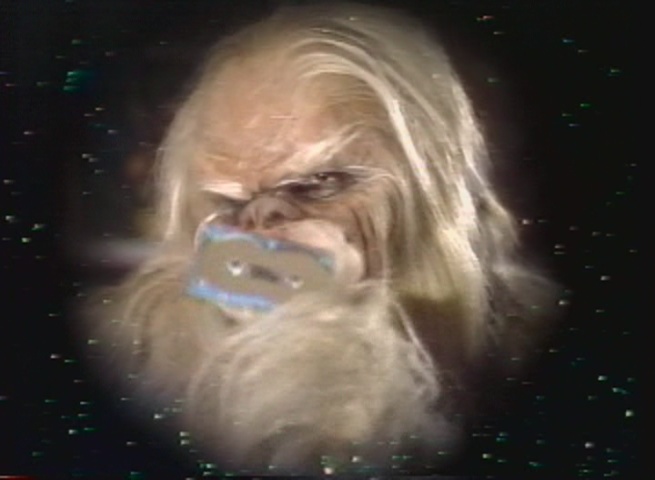 Seconded. I would also greatly appreciate the password for this release.

Just an update that disc two will be uploaded by mid day tomorrow.

What's the difference between the cut and uncut versions of the animated segment?

The "cut" version is the cartoon as it appears in the special. The "uncut" version is taken from what appears to be the original film source from Nelvana and has an extended opening and closing as well as an "alien" commercial between the two parts.

Disc one has finished uploading. PM for links.

Here are the details of version 2:

- Audio options: English and Spanish (unfortunately I had to drop the third commentary track as it would not fit on the disc without compressing it or something else) 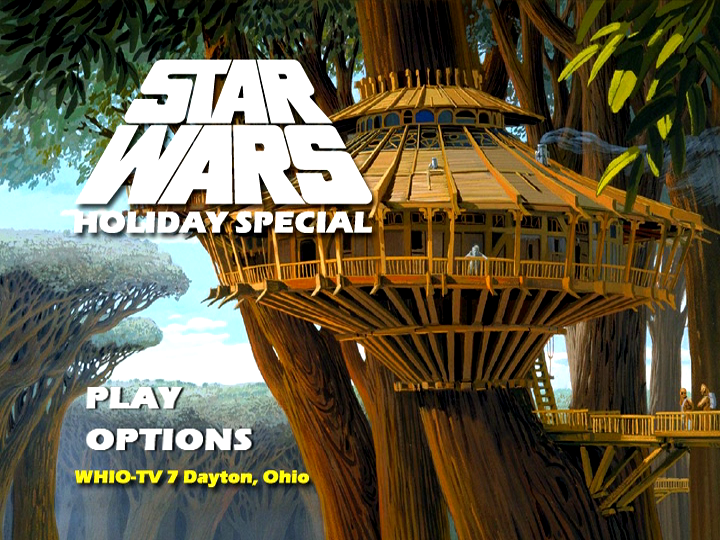 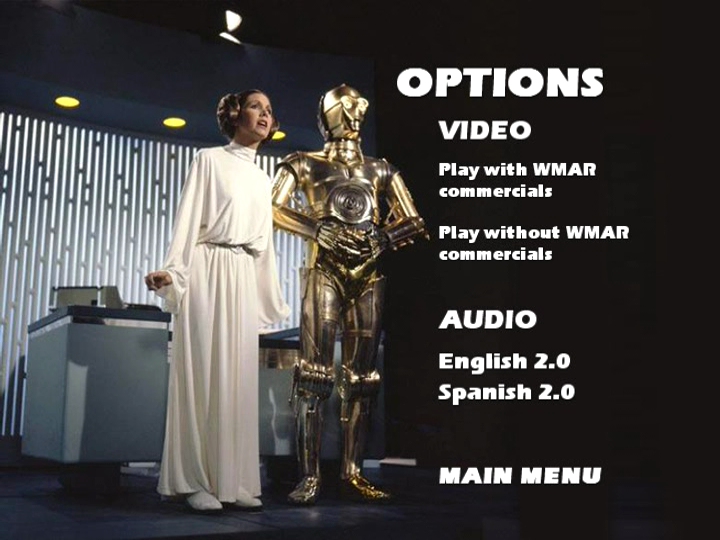 - Special features include French edit of the Holiday Special and an uncut copy of the animated segment complete with deleted commercial. 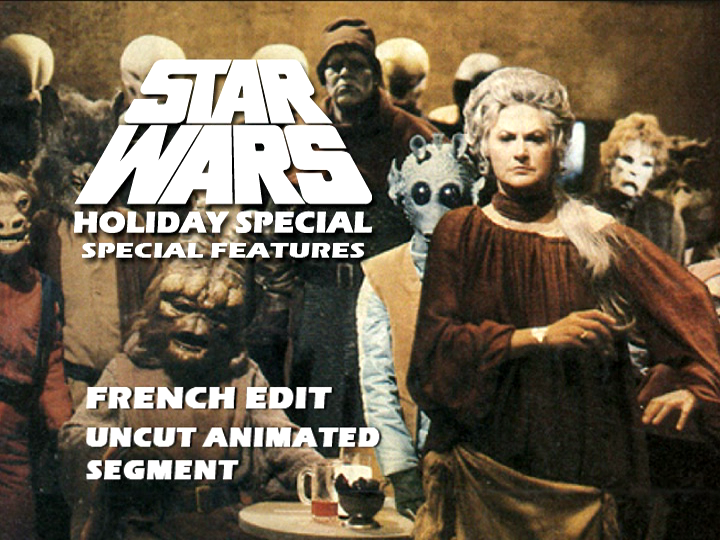 Has it finished uploading? I can get it on MySpleen and a.b.sw.

Disc one is over halfway uploaded but with an average upload speed of 25 KB/s it will still take a few days.

Just heard about this, and the screenshots do look pretty good...  I can't tell, is version 2 going to have the commercials added in from another source, and if so, is there any chance it can be made to sync up easily with the Rifftrax audio commentary (which truly makes The Holiday Special a watchable classic)?

The commercials from WMAR are included, though the Rifftrax commentary would have to be reedited to fit due to the special presentation intro.

Where are you uploading it?

I am uploading it to Mega, but my upload speed is slow so it will take a few days. After that hopefully someone will put it on Myspleen and a.b.sw.

Oops, days ago I sent you a PM regarding the possibility of adding subtitles to the disc, Tasjo, maybe you didn't notice it :(

No problem, I'm so eagerly awaiting the disc... ;)

Sorry about that. PM sent.

There have been a few minor setbacks due to some color issues caused by the despot filter as well as the previously mentioned brightness issue, but I have finished authoring both discs and they are currently being uploaded.

A comparison, because why not. Nice job, but isn't it a little too bright? (upper one is v1).

I believe that darkened picture quality of version 1 was a byproduct of the DVD recorder that was used for the first capture. No brightness adjustments were made for version 2.

Here is a short sample clip before I start rendering the final DVD files.