On comes the pc police to tell me that my childhood was bad? They can go fuck themselves!

And YOU can go fuck YOURSELF, you racist piece of shit.

There are tons of cartoons that don’t portray Caucasian folks in a flattering matter. Characters ranging from Elmer J Fudd and Yosemite Sam to the likes of Beavis and Butt Head. No one ever complains about those or censors those.

White people are stereotyped LESS than people of different races, you Repuglicunt.

In my view, feeling “uncomfortable” watching an uncensored Pastoral Symphony is exactly what is wrong with this nation and the world in general.

It’s come to a point where nothing can be done for fear of offending. Look at Apu from the Simpsons for instance! It’s enraging to even think about. But of course NO complaints about Cletus Spuckler and his family.

Fuck you. The uncensored Pastoral Symphony is racist, but it deserves to be shown so that we can teach our children about racism in our past, why it was wrong, and what can be done to prevent racism in the future. That’s how to ACTUALLY be politically correct.

Cool! Will it also include Phelous’s review of the concert?

NOTE: This project is cancelled.

NOTE: Like I said before, this project is on hiatus.

This project is currently on hiatus. Sorry about that.

Note: This project is canceled.

I have TMPGEnc Authoring Works, but I haven’t used it yet.

Note: Like I said before, this project is on hiatus.

I own the Digiview Entertainment DVD of the 1996 movie edit of The Wonderful Galaxy of Oz (1992-1993). I was wondering if anyone has foreign TV broadcast rips of the complete series, since it doesn’t survive in Japan (I think) and was never released as a series in the US. I don’t want to download the videos of the Arabic dub from YouTube, since YouTube compresses videos horribly.

I have TMPGEnc Authoring Works 6 to make custom Blu-rays and DVDs. One of my future projects is of a BD-50 fan preservation of March of the Wooden Soldiers (1934), with a function to toggle between 3 versions of the movie:

All versions will include custom 5.1 surround mixes in DTS-HD Master Audio sound, created with spectral editing in Audacity, as well as the original 2.0 mono tracks in LPCM sound.

Could someone tell me how to make a toggle function for Blu-ray in TMPGEnc Authoring Works 6?

Hi James76, I only just posted on a thread (mkv to MP4) about a program call avidemux. It should do what you are looking for, once a video file is loaded in press on the audio tab and then select track, another screen will come up showing available audio sources, select the one you want (you can leave as is or configure it to downmix or change codec) simply press ok the select save audio set your destination and file name.

Hope that helps you out.

Here is a link
https://www.avidemux.co.uk

I have Avidemux, but it’s probably not what I want to use for converting mono tracks to stereo anyways. Thanks, anyway!

OK, I’ve decided to put this project away for a while again. It will probably take me too long to split both of the series MKV files perfectly into the episodes, deinterlace the episodes and movie edits, and upscale every episode and movie edit to 1080p HD. I was also planning on making custom 5.1 LPCM upmixes (since I don’t have a DTS-HD Master Audio codec) for both the English and Japanese versions of the series, along with the 2.0 stereo Dolby Digital tracks.

Note: This project is on hiatus yet again.

I own the late-1990’s VHS of Disney’s The Little Mermaid (1989) and was wondering if anyone made a preservation of the 5.1 AC-3 LaserDisc of the movie, preferably upscaled to 1080p HD with A.I. software with the Dolby 2.0 surround and Dolby 5.1 AC-3 tracks recorded losslessly and converted to LPCM or DTS-HD MA. I know that the first DVD was the last to use the original late-1990’s 6-track mix as a 5.1 track, but I don’t own that DVD or want a preservation of it, since the transfer possibly has mosquito noise.

Hi,
One of my future projects is of a 1080p HD AI upscale of the obscure 1972 British musical movie, Alice’s Adventures in Wonderland, taken from the region-free 2005 Oracle DVD. It will be slowed down to its proper speed of 23.976 fps and have the gamma and colors corrected, a Dolby TrueHD digitally extracted stereo track, and the original 2.0 mono track. Are there any tutorials online on how to make digitally extracted stereo tracks? I can’t seem to find any.

I don’t think you understand the point of preservation. It’s not about your agreeing with the content.

Or disagreeing, either. We’re supposed to preserve things that have Harsher In Hindsight moments and Unfortunate Implications for our children to teach them about those things, why they’re wrong, and what can be done to prevent more usages of those tropes in the future (sorry, I’ve spent too much time on TV Tropes… and yes, just like it says it will do to everyone, it has ruined my life).

OK. I now have both Blu-rays as well as the 2-disc DVD set. I will upscale them as soon as I get a new external Blu-ray drive, since my current one isn’t recognized by my laptop anymore.

Note: This project is a WIP now.

I can’t purchase the DVD from the UK site, since I live in the US and the page says “Your selected delivery location is beyond seller’s delivery coverage for this item. Please choose a different delivery location or purchase from another seller.” I checked the US site for the DVD, but it’s out of stock there. If anyone in the UK is willing to purchase it and send it to me, please PM me.

OK, I’ve decided to revive this project. I recently purchased the English subtitled Discotek Blu-ray to revive the project, so it’s a WIP again.

JEDIT: Last time I checked today, Amazon said the Blu-ray is out for delivery today and will be arriving at 8:00 PM, so it will probably be here before that time.

If you send him a PM, he can send the rip to you.

From what I can see, it was only released in Japan on VHS. It remains unreleased on any other format in the country.

Jeez, not even on VHD videodisc or LaserDisc? That’s a bummer.

The copy on Youtube comes from its Polish DVD release which is as far as I know, the uncut Japanese version with Japanese credits. It has no English subtitles but the Japanese audio is there.

Ah, I see. So that’s why I couldn’t find it on Amazon’s US site or on eBay.

I would like a rip of the 1993 VHS. My 1993 VHS doesn’t work anymore, because I tried fixing it myself (and I guess I’ll have to have a professional videotape fixing service fix it for me).

Hi, I own the VHS release of The Wizard of Oz (1982) by Paramount and was wondering if this was ever released on an official DVD release in a foreign country. So far, the only foreign DVD I’ve come across is on a DVD site from Pakistan that sells bootlegs.
I’ve been wondering if there’s a Japanese DVD of this movie, since I saw an English version reconstruction on YouTube, using a foreign DVD which has the 1983 Japanese credits in place of the original 1982 English credits. I would like to preserve the Japanese version, make my own English version reconstruction with the English audio and credits from the LaserDisc (except I don’t own a LaserDisc player, and the only upload of the full English version of the 1982 movie that’s on YouTube is in poor quality and stretched to 1.78:1), and upscale both the English and Japanese versions to 1080p with Topaz Video Enhance AI.

Thank you! I’ve been waiting for someone to do this, since most of the only original versions of the reviews on YouTube have the That Guy With The Glasses website watermark cropped out for some reason. 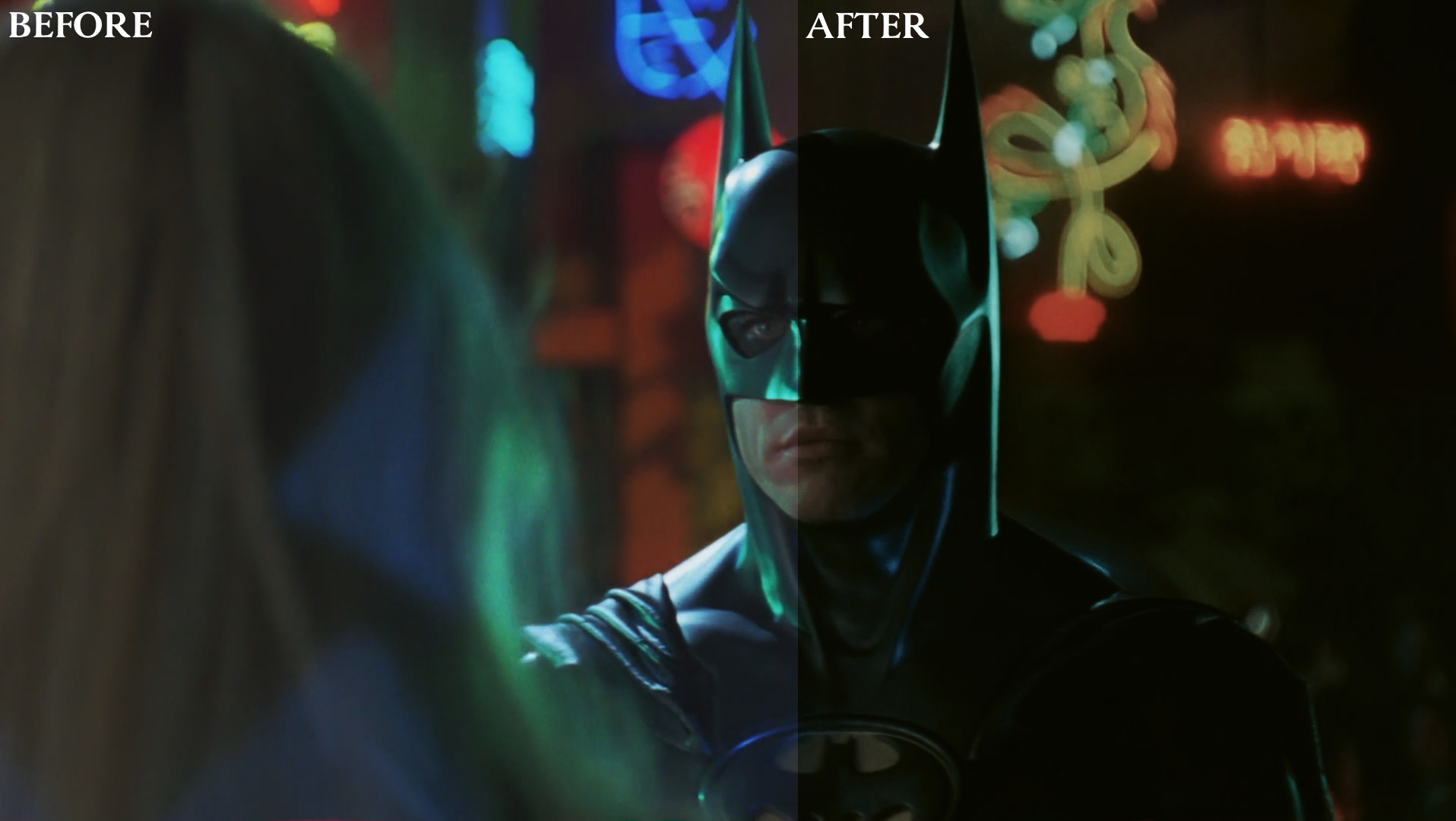 I like that the colors on the right are actually in the spirit of Burton’s Batman and how it looked in theaters back in 1989 (even though I wasn’t born in that year). Cool!

Hold on, how do you know about how Batman '89 looked in theatres?

I don’t know exactly what it looked like, I found out that Batman '89 was darker colored in theaters on LDDb’s page for the 1990 US LaserDisc.

The quality of the King Kong Colorized is quite good for Laserdisc, though it will never be quite as good as archival material on black and white in High Definition on a Blu-Ray.

Yeah, I thought so.

As for Casablanca i never heard that was on Laserdisc, i know someone taped it and wouldn’t share his copy. He also had Citizen Kane, the Sea Hawk. Treasure of the Sierra Madre etc.

Huh. I didn’t know that Citizen Kane or Treasure of the Sierra Madre had colorized versions. I do know that there are two colorized versions of It’s a Wonderful Life, one of which is by Hal Roach Studios from 1985 and the other is by Legend Films, which was available on a 2009 Paramount DVD (and is also available in HD on Blu-ray).