Found it on a stock image site here. There were 2 versions on there, duplicate images but with different watermark placements. I combined them to make a clean image: https://i.imgur.com/8FWS0Nt.png
It’s slightly cropped on the bottom though. Found another one here (not cropped but lower res).
That’s the best I can do, but I bet someone else has a better one. 😃

Have to see TROS again.

Pretty damn awesome. The retcons don’t make much sense, but they make the film much more interesting (as well as 7 and 8.) Wasn’t expecting Rey Palpatine at all, but I like it. I was rooting for that twist in Episode 8. Snoke = the Emperor works I guess. Hard to bring Palps back without that being the case.
It’s way too fast paced, and I was a bit overwhelmed. Should’ve been split into 2 movies or something. I’m eager to see some deleted scenes. Hopefully, edited in, they can give the film the breathing room it needs. An official extended edition would be great; it feels like they cut the film down a ton.
TROS is not perfect of course, but I really loved it. I’ll admit that the ending had me in tears. Way better than I was expecting after seeing the crap Rotten Tomatoes score. (Also I loved the John Williams cameo) For now I give it an 8.5/10

Yikes, I think I’ll disappear from here until the 19th. Catch you on the flippity flip. ✌️

I haven’t ripped my ESB Blu-ray yet actually, I’ll get on that. Just going off memory, the 19SE hologram looks different to me.

Well, if you wanna do quick comparisons, you don’t need to rip your Blu-ray. Use this:
https://starwarsscreencaps.com/star-wars-episode-v-the-empire-strikes-back-1980/35

True. Didn’t feel like trying to match one of those frames though. Usually the redone stuff has just a slight difference in position/size, hard to tell if it’s not the same frame.

Looks about the same to me.

I haven’t ripped my ESB Blu-ray yet actually, I’ll get on that. Just going off memory, the 19SE hologram looks different to me.

Didn’t realize that all shots of the rocks are different:
http://www.framecompare.com/image-compare/screenshotcomparison/J1BMFNNU

It’s only that one shot that was missing the shadow in 2011. 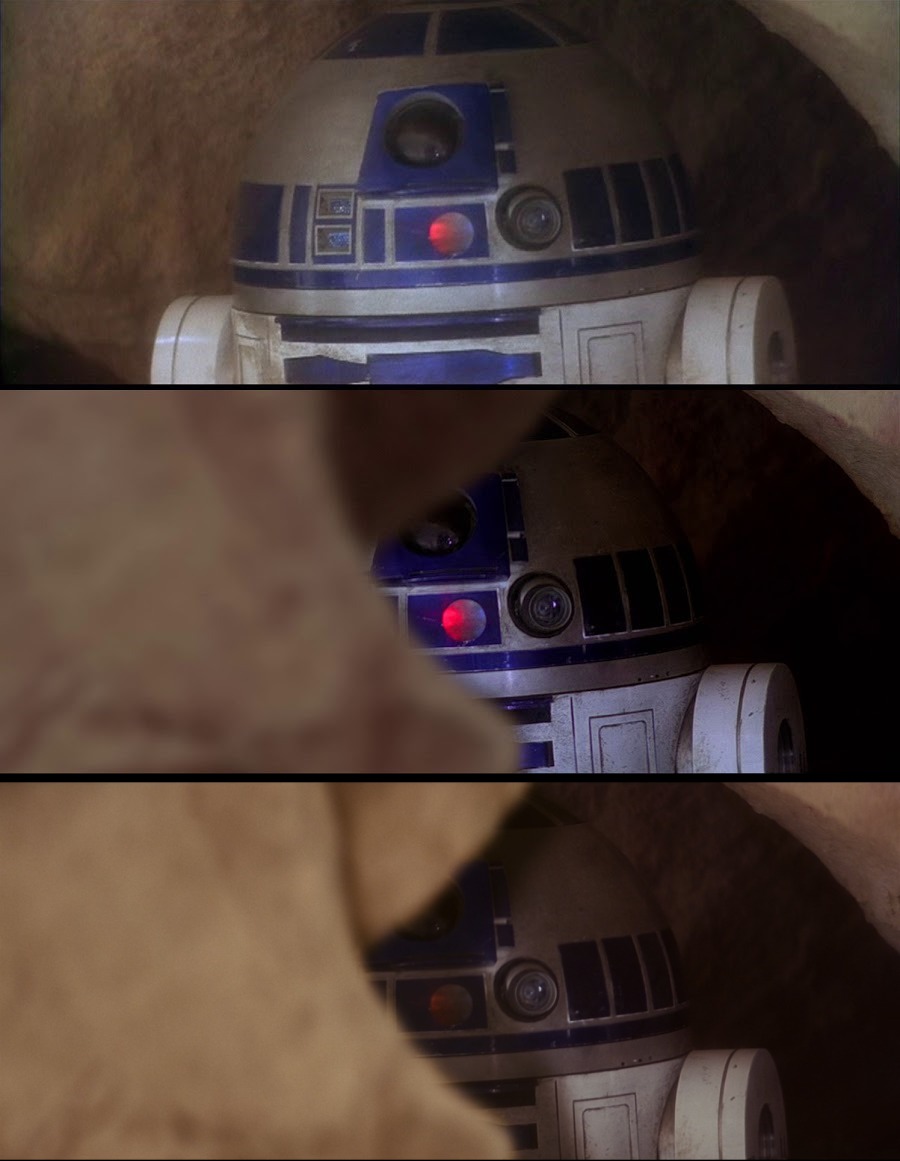 Is it true that Disney removed “A News Corp Company” from the Fox Logo but otherwise used the static 90s version that appeared on the SE originally? Normally i don’t like tinkering with opening logos, even something minor like that, as it’s interesting to preserve the history of these companies. But as the logos have already been swapped from the original, whatever i guess.

Yes. Looks much better without it, I think.

Didn’t know about that site. Can’t find much via archive.org… Gonna keep digging though.

A bit lacking in some areas, but I will see what I can do with these. Thank you

Oh, I wasn’t responding to you actually, I was just downloading the links in JohnnyR2D2’s previous post and figured I’d upload them all together. I didn’t realize there were even more soundboard clips. I’ll see what else I can dig up. 😃

As for bits of dialogues from the movies you can find here stuff from the late Star Wars Soundboards website section. I guess there won’t be everything but hey, it’s a start 😄

Thanks for sharing that, I archived all the files here if anyone wants to download them all at once:
https://mega.nz/#!ebxkTKyR!vphGrFlM77_DCtaGdzqc0XhKfj7mQk10BrnhbtHuLzw

edit 2: https://mega.nz/#F!DXoUjQAC!-wv0tAvpfAeVGS22eW6SKQ
All the soundboard files I could find. Contains about 1,400 audio clips.

I archived all the soundboard files here:
https://mega.nz/#!ebxkTKyR!vphGrFlM77_DCtaGdzqc0XhKfj7mQk10BrnhbtHuLzw
EDIT: https://mega.nz/#F!DXoUjQAC!-wv0tAvpfAeVGS22eW6SKQ

Plus it makes Luke’s rejoining the rebels during the briefing difficult to handle.

And I say that as a proponent of the idea.

The other problem is, you can’t really break up the stuff on Dagobah. It’s really just two scenes, talking with Yoda and then talking with Ben. But it doesn’t make sense to cut away after Yoda’s death because if you want to cut back later to the scene with Ben, you’d end up wondering “well what has Luke being doing hanging out at this dead guy’s house?”

I’ve seen the idea knocked around to somehow do a background replacement and make the Obi-Wan scene take place on Tatooine/in Obi-Wan’s hut, but that seems…difficult to pull off at best.

I’ve played around with it before, I think it’s doable. But it would require a few completely new background mattes, as some of the shots don’t quite match up. Getting it to look right would be real tricky.
A couple rough quick concepts I made a while back:
password: fanedit
https://vimeo.com/330880265
https://vimeo.com/367414980

Once I find the time to work on my own ROTJ edit, I’ll definitely try my hand it piecing this scene together. I’ve always loved the idea.

from 2016: “Don’t be surprised if, mid-February, this site and any and all online material related to it temporarily vanishes.” I wouldn’t jump to any conclusions. I doubt the site going down means anything. Like ChainsawAsh said, if he wants to share something, he will. In the meantime, there’s no point in speculating.

He also said not to be surprised if the website went down.

Is it April 1st already?