I have made my peace with the fact that the OOT will never be officially restored & released.

I remember the excitement around the first BluRay release - could the originals be included!?!
Then the 40th Anniversary - surely there would be something announced then!?!
John Landis! He must know what’s happening, right!?! (Spoiler alert: WRONG)
Then the release of Ep IX - wait, the OOT is bound to be released as part of a Saga box set!?!
Then… What about the 45th anniversary!?! The 50th!?! Etc. Etc.

Thanks to all here who have created such fantastic fan restorations. You were, and are, our only Hope.

I don’t mean to be crude, but it sounds like good, bad, or indifferent, we won’t get them while Lucas is still alive.

Not crude at all, just realistic.

I’d go one further & say the originals are never going to be officially restored, folks.

I respect JJ immensely for enabling the ‘Phantasm’ remaster, but whatever deal Di$ney made with Luca$ had to include a block on any such release for Star Wars - and I suspect those terms will still stand even after his death…

There was a FB reply from the Rivoli saying “we are showing the 1977 version” but it was on a sponsored post and has since disappeared.

They are also showing ESB & ROTJ on subsequent nights.

I have posted a query on the EpIV event page asking to confirm which versions they’re showing, waiting for my comment to be approved - if i get an answer i’ll let you know!

In case it’s of interest:

Unsure if this is simply a GOUT DVD projection? Or something else?

If this the original theatrical, colour me speechless! Anyone here able to report back and confirm?

Kinda surprised they aren’t coming on board to develop an epic SW TV show, rather than another movie trilogy.

I’m sure it’ll be all sparkly and emotive and swooshy with a huge backbeat, but can’t we just have the OOT already??

Hypothetically, we’d get this:
http://www.blu-ray.com/movies/Close-Encounters-of-the-Third-Kind-4K-Blu-ray/171515/

Please! Expect complete silence regarding the originals for the foreseeable future. It’s the only way to remain sane. I allowed myself to get my hope up for the 40th at Celebration for no reason at all. As soon as George walked out I knew it wasn’t going to happen.

I’m with you on this. Not getting my hopes up on an OT release all over again. The 40th was the time to do it, or to at least acknowledge it as a thing.

The surprise John Williams concert was nice though.

This appeared on the official Star Wars Twitter - lots of replies calling for a HD OT release!

Now they’re really rubbing it in.

I might be curious enough to pick this up, even though it’ll probably hurt my eyes… 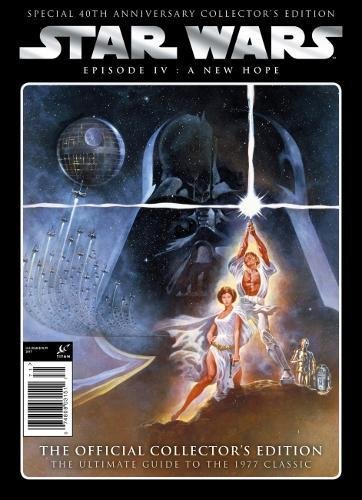 Want to see the very definition of a “screw you” to fans?

Here’s the ad in the back of the newest edition of the Star Wars Insider. It’s promoting the next issue that hits newsstands on May 23rd, 2 days before the official 40th Anniversary.

And what is the main thing they’re talking about? The 1997 special edition re-release.

They might as well put a big middle finger on the cover.

Must be a typo. Fixed:

“Insider reveals how the Star Wars saga makes a triumphant return to the big screen in 2017!”

Darth Cracker said:
And has anyone here got the mad skills to repurpose the Rogue One trailer so that it depicts a rag-tag team of rebels trying to steal the Original Theatrical cut from the Evil Empire? That might go viral! 😄

That’s a cracker of an idea, Darth 😃

What a smashing good joke! 😃

You guys crack me up 😜

Maybe he’s someone we should tweet at when we do the open letter thing?

And has anyone here got the mad skills to repurpose the Rogue One trailer so that it depicts a rag-tag team of rebels trying to steal the Original Theatrical cut from the Evil Empire? That might go viral! 😄

Kudos to RJ for tweeting that (& not removing it)

Sigh… “That which does not kill us might just annoy us over a long period of time.”

At this point, haven’t we been patient enough? It’s the freaking 40th anniversary. If they can’t make a simple direct statement on the matter…

This is what drives me nuts, they (@StarWars @Disney) gush about how much they love the SW fans onstage at Celebration, but they don’t respond to tweets about the OT, or even acknowledge it.

Today, fans on twitter are sharing the '77 poster alongside TLJ one & saying what a cool reference it is - apparently without even being aware that '77 movie no longer exists (officially).

This is the weirdest situation regarding a movie release in cinema history but there’s nothing to see here so move along - that’s what LF & Disney’s silence on the matter says to the fans they purport to love & adore so much, when they just want us to get back in the kitchen to make them a fricking sandwich.

Looking forward to hearing how this goes 😳

I don’t think we’ll hear anything about the OOT at Celebration. We can only hope that they will release it this year low key

I don’t think we’ll hear anything either. And I don’t think we have a hope that they will release it, not this year, not 2020, not ever 😦 Thousands of fans going batshit mental over the 40th anniversary of a movie no-one is allowed to see anymore is kinda sickening. Lucasfilm denegrates its own legacy every year this drags on, while all and sundry kiss the ass of the stubborn old bastard who keeps a tight grip on the franchise even after selling it off for billion$.

Here’s Tom with the weather… 😉

Just saw this and they added that it also doesn’t have to do with an Obi Wan movie. Time to get my hopes up again.

Help me Obi Wan, we have no hope!

I wasn’t expecting anything on a OUT trilogy release, rather hoping against hope for a restoration of the first movie for its 40th anniversary. Seeing the out-takes in the 4K thread has made me wonder all over again though. I guess we’ll know for sure after today’s screening of Star Wars & Rogue One?

Am watching the SW: Silver Screen edition. It’s a better way to end the day.

We came, we saw, we speculated.

I may have something in my eye.

I hope it’s not sand!

I may have something in my eye.