Some news after many weeks …

Since ChewieLewis’ project (https://originaltrilogy.com/topic/Phantom-Menace-99-HD-Theatrical-Version-by-Chewielewis/id/60924) started on the same basis as mine, and since ChewieLewis told me that he wanted to deliver his project as soon as possible in 2018 (and thus, it wouldn’t be possible to collaborate because my work speed was much more slow than his), it seemed constructive to me, for the benefit of all, to restart/reload my own project on a new different base, even closer to the “Despecialized” approach: rebuilding TPM in HD by taking Blu-Ray as the main source (instead of merging HDTV and STDV sources).

As a result, the OT community will benefit from two different approaches:

The process is obviously more complicated, but is well advanced:

I have also been able to find other major sources (ie captures from the first DLP version of Texas Instruments in 1999, or negative scans with original cinematographic subtitles).

NB: I sincerely regret that ChewieLewis insisted so much on finishing the project in 2018 - which was the main reason for our lack of collaboration (since I was not able to work so fast)… finally, his project was not delivered as fast as he said in 2018, so we could have collaborate.
That’s life… 😃

As some of you maybe know, I’m working on a reconstruction of The Phantom Menace in full HD for more than one year. The goal of this project is to provide a 100% theatrical version of the movie, in 100% HD (not a single frame in upscaled SD, everything in real 1080p), as it was never released, except maybe a German HD broadcast that was never succesfully recorded.

Why do I talk about it now

There are two main challenges in recovering the theatrical version :

Solutions that I used

Update 2018-06-26
Here is a comparison between a “simple” upscale from SD and my final HD reconstruction for the Senate scene :

Here is a comparison between original LaserDisc, Euro Canal Plus PAL broadcast (SD), ORF1 PAL brodcast (SD) and my final HD reconstruction for the arrival on Coruscant (presumed unavailable in HD). It is the 80th frame of the scene : 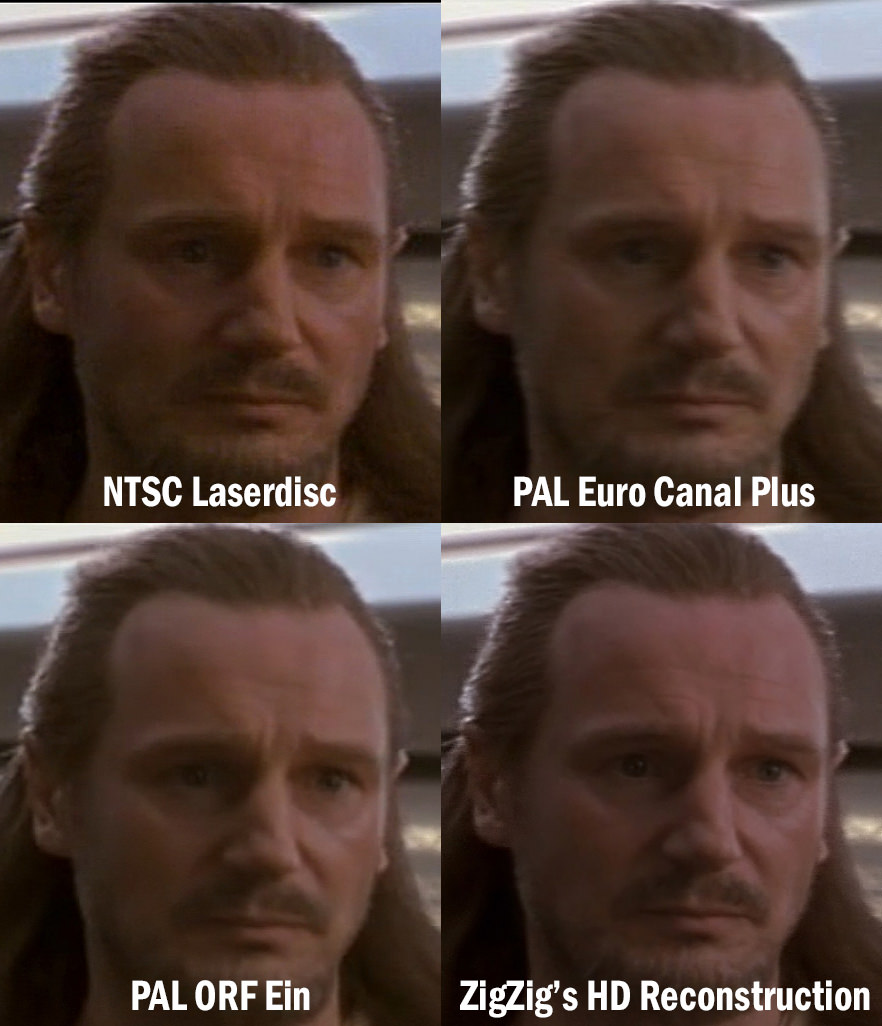 Is there a contention with other projects ?

Well no. We waited so long to have a theatrical version of The Phantom Menace in HD, that we will not sulk our pleasure now that several projects are moving forward!
There is definitely no contention with Poita, since the two projects are totally complementary, and I rely heavily on his work to further improve the missing scenes in HD (and I financialy support it).

Regarding ChewieLewis, we started this project approximately in the same time (even though I’ve already talked about mine a long time ago). It seems that we work with the same sources and we will probably achieve similar results, even I’m pretty confident that the scenes fully rebuilt in HD will probably be sharper and more detailed in my version, due to the technique I developed. But as far as I am concerned, there is no contention, but rather a kind of « competitive sportsmanship » which is probably pushing us to go beyond our limits, and it’s a good thing.
I am pretty sure that some scenes will be more satisfactory in his version, and others in mine, and I really hope that we eventually can make later an even better common version.

When will it be released

As I have a little girl that requires a lot of time, plus a full time job, it will take me several more weeks to release something.
The scenario is to release my version before the 20th anniversary (19th May 2019), and I hope even in 2018.

[This part has yet to be written]

And will you be restoring theatrical subtitles baked into the video like Despecialized, or will you keep the HDTV subs or use soft/hardware subs?

This question does not really arise in Europe, since both formats are fully supported.
Anyway, my idea is to release both versions :

AFAIK, hard subs were only visible in the original English version. Dubbed versions didn’t contain English hard subtitles (but German, Italian or French subtitles instead).
So my idea is to release a file without burned-in subtitles (to allow future international versions), then to add picture-based subtitles (that match the theatrical English version) when muxing mkv or Blu-Ray files.

What do you think ? Is it a good idea ?
Since the work is not finished yet, do not hesitate to propose something else!

I’m partial to burned in subs, but that’s mainly because my media player doesn’t recognize default or forced sub flags and I hate having to manually turn them on every time. Plus it would match my Despecialized SW and ROTJ, my HDTV AOTC preservation, and the official TFA and RO releases. But that’s my personal preference - if you’d rather do graphical PGS subs that are a close match to the theatrical, that’s your choice. I also don’t think you’d be able to do the dissolves that way as they exist in the theatrical version, but I could be mistaken.

But this is also coming from a US citizen, so I understand the desire for more universal compatibility with multiple languages. I guess I’m just partial to the idea of preserving the English theatrical version exactly as it was.

Really looking forward to this ZigZig.

Seeing this much TPM appreciation in such a short period of time truly warms my heart!

Precisely, my HD reconstruction tool feeds on this kind of HD images: the more it receives, the better the final result is.
So I added this new image to my tool and regenerated the scene.

Here is the resut (compared to another project where a simple upscaled SD video seems to be used):

I did it quicky without really adjusting the fine parameters, but the result seems to me already very promising.

I’m currently writing a tutorial about this technique, with a video sample from another missing scene (arrival on Coruscant) which gives an astonishing result identical in quality to the HDTV version.
But it takes lot of time (especially since English is not my mother tongue, and I have a little girl who asks a lot of attention everytime I try to sit at my computer).

Can’t wait for this to be released!

At the request of a member of this forum, I uploaded the “simple” overlaying of two SDTV rips (aka spOrv’s “PaNup”) on MySpleen.

It is NOT the HD reconstruction I’m currently working on, but a good SD version that I made to use as guide for my current project.

PS: I don’t know if it is better to make a new thread about it, or just to mention it in this thread… Dear moderators, don’t hesitate to move this post to a new thread if it’s better.

Anyway, here is the nfo :

Here is the theatrical cut of The Phantom Menace preserved from two TV rips, without any other reconstruction than cleaning and overlaying both sources

Nothing more was done (no reconstruction, datamoshing, recomposing, modeling…). The average quality is close to a DVD, with two advantages :

This file was originally intended to private use only as a guide for the project of HD reconstruction I’m still working on, but someone from OT.com asked me to share it.

So Trillary Dump, this is for you!

*** Feel free to share it or use it in a fanedit, but please always mention this .nfo and/or the link to this page ***

How does one over multiple video sources anyways?

Possessed said:
Danfun, do you also love the soup and the bread, or just the bunny?

How does one over multiple video sources anyways?

Just throwing this out there as a suggestion - a lot of us want to see theatrical Ep 1 in HD, but I think a lot of us also want to see Theatrical Ep 1 WITH CGI Yoda. TPM creates this conundrum of the theatrical version being less canonical with Eps 2 and 3 due to the use of Creepy Puppet Yoda. Maybe two versions would serve well to address this second, less vocally sought after version? I have a lot of faith in your process and the eventual quality of your release.

Thank you for your message. I’m not sure that I understand the purpose of your suggestion. What would be the interest of a theatrical Ep1 with CGI Yoda, vs. the official Blu-Ray release (that stars already a CGI Yoda)? Do you mean that you want to see the original cut (with a shorter podrace, no air taxi sequence and so on), but with CGI Yoda instead of CPY?

Thank you for your message. I’m not sure that I understand the purpose of your suggestion. What would be the interest of a theatrical Ep1 with CGI Yoda, vs. the official Blu-Ray release (that stars already a CGI Yoda)? Do you mean that you want to see the original cut (with a shorter podrace, no air taxi sequence and so on), but with CGI Yoda instead of CPY?

I believe that’s what he means. It’s something I’d be interested in myself as well, but would certainly not fit as a “preservation” in any sense, so it’s kind of irrelevant for this project.

Yes - while I prefer theatrical TPM, Yoda not being consistent in the prequels makes my viewing preference a toss up. I understand that this is a preservation, so you may not feel it’s within your desired goals to release such a version. My suggestion is intended more to provide you the opportunity to simultaneously create such a project while you’re already in the thick of things, as opposed to someone else using your project later on as a source to release such a hybrid version.

OK, I get it.
I could indeed release a fanedit (with CGI Yoda into theatrical cut) at the same time as I’m working on my preservation.

I think it would be better to create a “theatrical CGI Yoda” cut using Blu-Ray footage for everything except what’s necessary to revert the original editing here and there, otherwise you’ll have a big gap in visual appearance between the CGI Yoda shots and everything else. It probably wouldn’t be that hard of a project to tackle, though I imagine you’d want to start with a color corrected and regrained version of the BR just because, well, why wouldn’t you?

Well, that is definitely a good idea for a new fanedit… that I’ll consider after my current preservation project!

This is going to be incredible!

Can anyone confirm if nightstalkerpoet’s DTS-HD MA file of The Phantom Menace Cinema DTS Audio Track is in good sync with this release?

But this project is not released yet…