I never hated it. Truth to be told, I don't dislike anything from the OT (in it's unaltered form). Yes, Jedi is inferior to its predecesors, but it's still classic Star Wars. Honestly, I couldn't imagine the film being any better without it.

The original music has never been released.

Again apparently destroyed or lost or something.

I watched a documentary about ROTJ and was really surprised that the small furry dude was actually originally planned. Is that Max? He was in a crate or wooden box If I remember right. 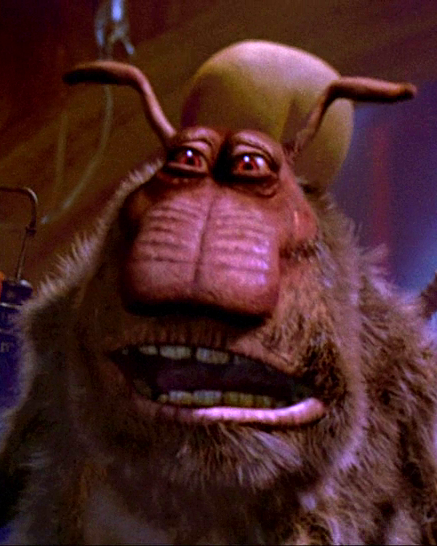 I think it's in this documentary. I never knew the cantina band was called that name either.

Maybe I'me just easy to please, but I got my copy of the movie version simply by hooking my computer to my digital recorder and pressing "play" on Harmy's cut.  Are you looking for some kind of commercial release, or do you just want a copy to which to listen?

I like 'Lapti Nek'! Much better than 'Jedi Rocks'. 'Lapti Nek' sounds like a song. 'Jedi Rocks' is just…ewww. Then again I also one of the few not annoyed and prefers 'Yub Nub'. Just my opinions of cousre.

I've always wondered if the scene could somehow just be trimmed to show Ula falling into the pit while dancing to the SE lead-in song that precedes Jedi Rocks. Granted, it's like ten seconds, but I really liked it.

I liked that little piece of music too. Harmonica blues type-a-thing. Sounds more like what I'd expect to hear in that place than either OT or SE songs.

I'm not crazy about Lapti Nek, but I do like all the other music the Max Rebo band plays.

I really hate the SE song. Unlike the original song, it doesn't fit the setting or the mood. I remember sitting in the cinema feeling embarrassed as it played. I looked behind me to see if anyone else looked uncomfortable.
Many did.

Another thing about the SE song is that it doesn't sound anything like the other music the band plays. It's a totally different style and sound. The band in Star Wars plays two songs and while each is different, it sounds like it's the same band playing the songs.

The Anthology was supposed to include a 5th disc, but didn't go into the production.  The set was to include the film and English versions of Lapti Nek as well as the Max Rebo songs.  So, is this music really lost?  Also, a short clip of one of the Max Rebo songs can be heard on the Star Wars Soundboard at starwars.com, if that's any indication.

Here's some information about the 5th disc, which was taken verbatim from the FSM forum:

Lukas Kendall wrote in the Jan/Feb/Mar issue of Film Score Monthly
(among a wealth of other SW music background):

"And finally, the 'fifth disc,' an object I made the mistake of
mentioning a few months ago. At this point, while a sequencing for
a fifth disc was made (featuring another 70 minutes of music), there
are no immediate plans to release it. It's not dead, just kind of
in limbo. Because I wasn't supposed to announce it, it would not
be a good idea to write Fox demanding the "fifth disc." To them
nobody knows about it, and therefore nobody would care if they ever
did it. Rather, write that you would be interested in 'any
additional Star Wars outtakes and unreleased music' like the fourth
disc in the set. Address is: Fox Records, c/o Fox Music Group, PO
Box 900, Beverly Hills, CA 90213. Be nice, be brief and try not to
sound like you're crazy; perhaps disc five may yet happen."

So there you have it. If you're interested, here's the missing
music that could be on a fifth disc according to Film Score Monthly:

I LOVE Lapti Nek. I preserved two excellent articles about it here: http://originaltrilogy.com/forum/topic.cfm/The-Surprisingly-Strange-Story-of-Lapti-Nek/topic/14770

will anybody do a restauration of the complete lapti nek video with a clean up,color correction and insert the best footage from dvd and bluray?

i have seen harmys work!!

Every bump is extra love for Lapti Nek.

Every bump is extra love for Lapti Nek.

Jedi Rocks is downright embarrassing and is reason #1 that if anyone tells me about watching Star Wars for the first time, I make absolutely fucking sure they watch the unaltered movies.

Lapti Nek all the way!

I actually do like Jedi Rocks as a song, but not in the context of this movie. Lapti Nek all the way.

Jedi Rocks is absolutely horrific. Whenever I watch ROTJ I mute my television out of embarrassment when Rocks comes on.

(1983) A pale imitation of the cantina band from the original film - let down by an unconvincing lead-singing puppet in a grass skirt and sporting hooker lips.

(1997) A grotesque, expanded and ‘improved’ version of the scene - with even more phoney looking CGI garbage thrown in and pointless cut-away shots to ‘ladies’ man’ Boba Fett. Sh*t.

Lapti nek is just so catchy to me. It’s a goofy scene, but it doesn’t take you out of the experience, while Jedi Rocks feels practically fourth-wall breaking. And Lapti nek is just plain a better-sounding, more believable song in the Star Wars setting. I can live with most other Special Edition changes, but Jedi Rocks is a deal-breaker for me. Lapti nek deserves to be preserved.

Jedi Rocks is absolutely horrific. Whenever I watch ROTJ I mute my television out of embarrassment when Rocks comes on.

> not watching the theatrical cuts

I find it catchy, something “Jedi Ro[t]s” frankly is not.

There are good reasons why fan edits aim to shorten the first third of the movie.

The first act isn’t the problem with the film.