Have you thought about using the Wampa shot from Adywan’s version? It looks so much better compared to the original shot, where it looks like it’s sliding along?

Heh. I guess it goes without saying!

And I try to stick loosely to official versions of shots without having a good reason to deviate, because otherwise where do you draw the line?

Where exactly was the audio mix for this project sourced from? Was it from a film print of the '97 Special Editions, or from its LaserDisc release?

The DTS track on CD that would’ve been played in 1997 in theaters. The files themselves, as processed to fit with home video sensibilities by a team that included Silverwook.

Would it be possible to get a smaller 1080p MP4 for ANH similar to the ESB and ROTJ versions? These versions are very useful for streaming from a remote media server on semi-slow commections.

I hadn’t done that for ANH because I know there’ll be another release on the horizon. In the meantime, you could download a higher quality encode and convert it as desired using something like Handbrake.

I’m gearing up to revamp this project based on a few things changing. For one thing, I finally tried out DrDre’s color matching tool, and have fallen in love. I have used it to bring ESB a little closer to what feels right, using Adywan’s old 1997 reconstruction. I’ve targeted a happy medium between the two, and at least enough to remove the aqua color throughout the 19SE of ESB. For ROTJ I plan to bring it just a bit closer to the DeEd, but not changing it as much as ESB. ANH I may go ahead and grade it a little closer to Adywan’s color corrected 2011 BR.

In addition to regrading it like that, I plan to use Adywan’s fix for the Cloud City window that introduced a continuity error in the SE rather than resorting to OOT footage (color correcting it to match).

I hope to steal a few things from The Man With No Name’s Devastator project for ANH.

There’s a few things I’d like to list to see if anyone has the means and desire to assist with. These are wishes, not necessities, but would be welcome if someone shared the desire to see them realized:

This is awesome news Hal, really looking forward to this.

Oh, and another thing is I’ve made custom stereo mixes for all three. Because the changes are straightforward for the most part it wasn’t too much trouble to recreate the mixes using the 1993 and 1997 stereo mixes from PCM from LaserDisc. A few short portions aside, these are natively 2.0 Dolby ProLogic II. And the portions that I mixed down I did so targeting ProLogic II. Not that it matters because there’s a 5.1 mix anyway, but still.

Will the new custom stereo mixes have the changes you originally made as in Obiwan’s “I want you to have this when you were old enough”? 🤞😁.

Yes, and for that change I was able to recreate it using stereo sources rather than folding down the 5.1 version. It’s simply lifting a consonant from earlier in the scene.

The stereo should be identical in content to the 5.1, with one notable exception. The 1997 mix doesn’t always present 3PO’s dialogue very well, and at least on my setup I hear some distortion. You can hear it most clearly in Luke’s garage. It appears to be like that in every iteration of the 1997 SE mix that I have access to. So for the stereo mix, I use the 1993 mix for any scenes in which I can discern this distortion. (Can’t do much about it in the 5.1 mix because no 5.1 mix available is anywhere close enough to use for swaths of the film at a time.) This supposed issue appears to be an inevitable part of using 1997 as the main source, but at least the (PLII) stereo track is free of it.

Honestly, I’ve never been a fan of the Cloud City windows in either the SE or Adywan’s edit. The lighting doesn’t match the actors at all and it becomes one of those “can’t unsee” things when you start to notice it. Worst example is when Leia, Chewie, and Lando are making their escape. Would actually prefer OOT footage if that can’t get fixed up.

I’ll see about that one shot, anyway, with the heroes running by. But I imagine leaving it as the SE has it, even though I agree it’s not super well executed.

I also had the same thoughts as you about this opening shot and although I have not tried it out yet… For the very start I was planning to show the deleted gonk droid Death star hall way but only use the frames of people running in the death star with an Alarm removing the Frames with the blue planet. Then cut to the x-wing Special edition as the x-wing passes camera. After Red 5 Standing By change R2-D2 to cockpit shot from ESB as the S-foils are already open then cut to theatrical version of x-wings and y-wings but change the planet Matte so it comes before gold leader says put s foils in attack position. on the Special edition shot of the x-wings opening the s-foils It would be good to put the Death star back in it’s theatrical location so it matches up with the next shot of them flying in.

Where can I find DrDre’s color matching tool?

Have you considered simply using the OOT version of the Mos Eisley entrance? I personally prefer it.

Have you considered simply using the OOT version of the Mos Eisley entrance? I personally prefer it.

It is mostly better, but the opening shot of the OOT scene is absolutely awful. Seriously, it’s one of the worst-looking effects shots in the movie. So I understand why Hal would rather use a modified SE for that shot, especially given the hybrid approach of the rest of the edit.

Yeah I’m still open to possibilities with Mos Eisley, but it’ll be some hybridization between the OOT and SE for sure. (For the ‘Victory Celebration’ version ending of ROTJ, it helps to have seen that SE-ish version of Mos Eisley.)

People a while back pushed back against using this shot between the speeder first pulling up to the city and arriving at the checkpoint:

But according to this map, I don’t really see why it would be wildly inaccurate to cut to it instead of the SE helicopter shot. Evidently the checkpoint is well into the city itself, so either shot should be fine. That would allow me to use a shot that actually looks halfway decent instead of something that doesn’t. 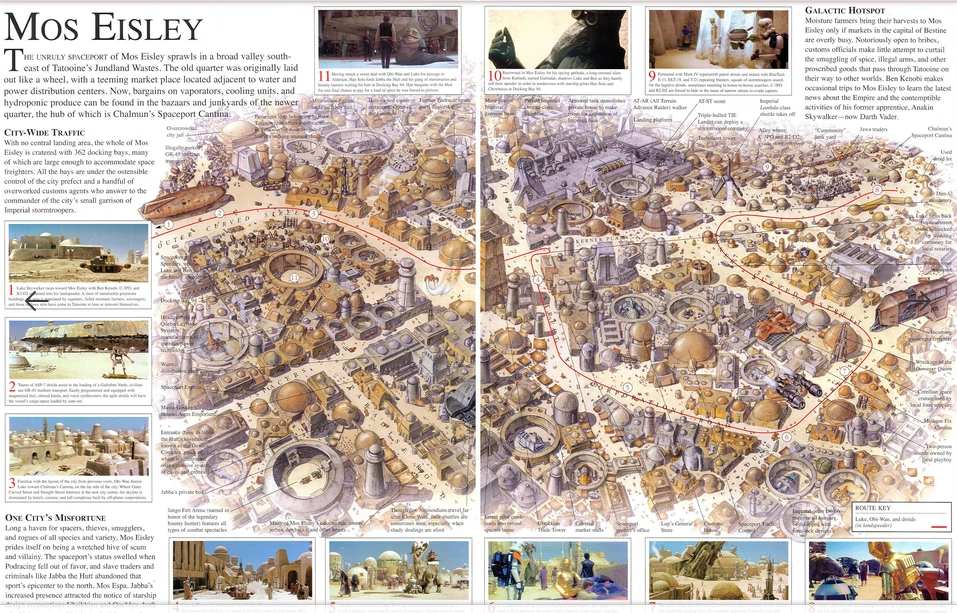 That’s like, one of the few SE Mos Eisley shots that I actually like. And I bet it’s not coincidental that it’s also one of the few that uses practical effects (as well as just having the CG creatures in the background where they belong).

Why was the ring in the second Death Star explosion in Return of the Jedi removed?

I find it weird that the SE introduces a praxis shockwave ring around all three major explosions of the trilogy. If there’s only one, that feels better to me.

And since I’m using the SE version of the battle of Yavin, I feel it’d be weird to switch into the OOT right at the moment of the climax. Plus, that shockwave (first Death Star) actually feels like it adds something to me.

Are you planning on keeping the despecialized version of this shot, Hal?

I find it weird that the SE introduces a praxis shockwave ring around all three major explosions of the trilogy. If there’s only one, that feels better to me.

And since I’m using the SE version of the battle of Yavin, I feel it’d be weird to switch into the OOT right at the moment of the climax. Plus, that shockwave (first Death Star) actually feels like it adds something to me.

I find it weird for the first Death Star to have a shockwave ring and not the second since the second one is way bigger.

It’s your edit tho, you do you.

Again, the way I have it there’s only one explosion that happens to have a shockwave, making it unique and less weird to always happen in the OT but never anytime else.

Are you planning on keeping the despecialized version of this shot, Hal?

Can’t see the image. What shot are you talking about?