I saw all original trilogy films here, right up to the triple bill.

Great memories of this place.

I think this is a indoor swap meet now...

The mall theater I saw Empire in glorious 70mm was carved up into small crackerboxes over the years, got kind of run down and seedy, (or so I've heard) and apparently is going to be torn down and rebuilt.

The honest to goodness movie palace I saw Jedi (and Raiders) at still stands, but it became a concert only venue not long after '83.

It is not. On The Secret History Of Star Wars site, I wrote a blurb about it several years ago.  I don't have access to my pictures right now, but I'll come back and update this with the link to the piece, an old picture, and a current picture.

Several years ago the entire area was razed and rebuilt. It is now completely unrecognizable from what it was in 1977. Some of the side streets aren't even there anymore. The street that ran directly behind the theater is still there, so I know about where the theater was.

This is going to seem weird but Anchorhead this is the theater you saw Star Wars at:

The '82 rerelease played in Hollywood, (across the street from the more famous Chinese). The theater was restored (and its original name, El Capitan) but is significantly smaller now on the inside than it was in the 80s, too bad. Sure enough here's the picture they have That’s it alright, Zombie. Thanks. The theater had only two screens. wThey were huge and had a sort of stage in front of them. Not a stage you walk on, but more of a landing just in front of the screen.  Seems like screens were set back in that landing about twenty feet or so. The area was bathed in a pale blue light prior to each film.

I can’t really figure out how to describe it. I just remember the screens, and by default the theater itself, to be a very big structure.

Im doing this from an iPad, so I don’t know if that link will work.  If it does, this is the area as it looks now. The side wall of the theater in the old picture was about where the front of Cacique is now, with the theater entrance facing away from where the new picture was taken.

The street in front of the theater is gone, as the new structure layout runs perpendicular to the layout of the old theater. It would have been about where Pier One is. The new picture looks to have been taken from the curb of the street that ran behind the theater.

I used the Google Earth timeline feature to show the theater and how different the area is now.

Here is an aerial from 1978.  On the right of the photo you can see the street that was removed when the area was razed.

Here’s the same area as it is now.

I made an overlay of the two and placed the outline of the theater where it was when I was a kid watching Star Wars.

The theater i saw Ghostbusters and Return of the Jedi and Gremlins at is  no longer standing. It was a small theater near where Jordan Marsh used to be.

I think Star Wars was screened in my home town as a double feature with the Wizard of Oz.

The place was called the strand theater. Only had 2 movie screens.

No as I've never had the privilege of watching Star Wars in a theater. I also refused to watch the altered editions in that kind of environment. I've seen some expanded universe "what if?" stories with Anakin Skywalker though... I suppose the theaters where I watched those are still standing.

Too young to have seen them (though I'm pretty sure they did show the SEs in 97), but I saw Episodes II and III there. Place is obviously still standing.

saw it at a fountain valley, ca. drive in.  just found out it showed 70mm.  its gone of course.

best memories-  seeing it for a charity screening in the early 90's at cine capri (where the scofield audio was recorded) in phoenix. of course its gone. also saw the awful special editions there too.

cool videos on you tube about cine capri, check 'em out.

quick edit- also interesting, star wars made the most money at the cine capri for north america during its initial year long run.

The building is still there, now an Indian restaurant.

Edit - some pics back then: Edit #2 - the cinema had 2 screens, 'Major' and 'Minor'. At the time of this photo (probably around 1982) The Verdict was showing on the minor screen, and the major has a Mad Max double bill. The poster you can see on the right hand side is this one: 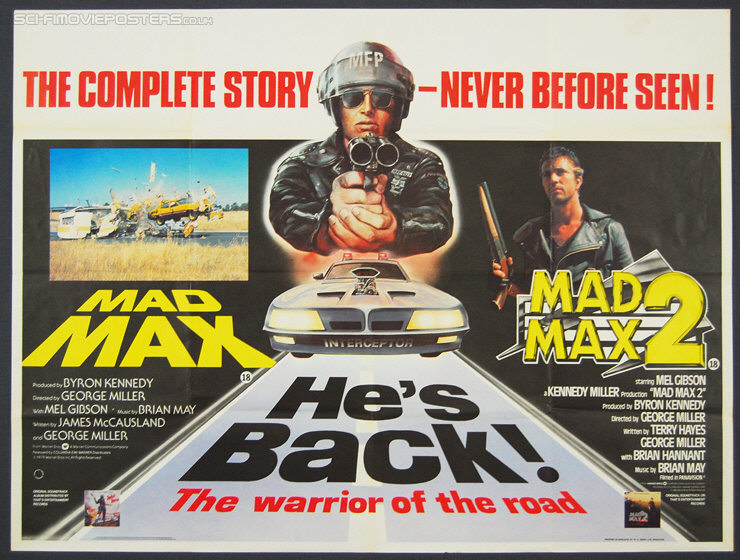 Interesting looking theater, Moth3r. How big was it on the inside?

As an aside, most of the movie theaters I went to locally in the 80's are gone but two. (Not counting the former movie palace.) And they were both built in the 80's.

Interesting looking theater, Moth3r. How big was it on the inside?

The Minor screen was about the size of the average home theatre room that rich bachelors build for themselves these days. And the Major was twice as big.

On reflection, I think it was slightly larger than that! But it was no 70mm 6-track venue, you understand.

This is where I saw The Phantom Menace:

Still standing, and still a cinema (I took my son to see Toy Story 3 there a couple of years ago). 100 years old next year, it is believed to be the second oldest remaining purpose built cinema in the UK. Here's what it looks like on the inside.

And this is where I saw AoTC: An experience that put me off cinema-going for years. I watched RoTS (the workprint bootleg) on a 32" TV at home in my conservatory. The theatre is still there but sadly the two largest screens have been divided.

It's now got eight smallish screens instead of one impressively large one, one rather large one and one reasonably large one.

The frequently malfunctioning escalator and steps are also gone.

It was particularly memorable as the line went around the corner and up the broken escalator into the entrance at the side.

As a seven year old I could barely see over the edge of the surrounding wall (especially with the crowd) all I could see was the church tower next door which looked like a gothic space rocket.

I watched all the individual releases here on holiday visiting relatives.

Salmon-like I returned here to watch the OT triple bill showing with my cousin, I took my niece to see the SEs there and I watched every PT episode there too.

Nope, razed. Before it went, saw the '97SE there too...
Glenwood
Boxoffice

However, in practice you must take into account the “fuckwit factor”. Just talk to Darth Mallwalker…
-Moth3r

I found this awful picture of Guildford Odeon (post#1) after it's closure in the 90's. 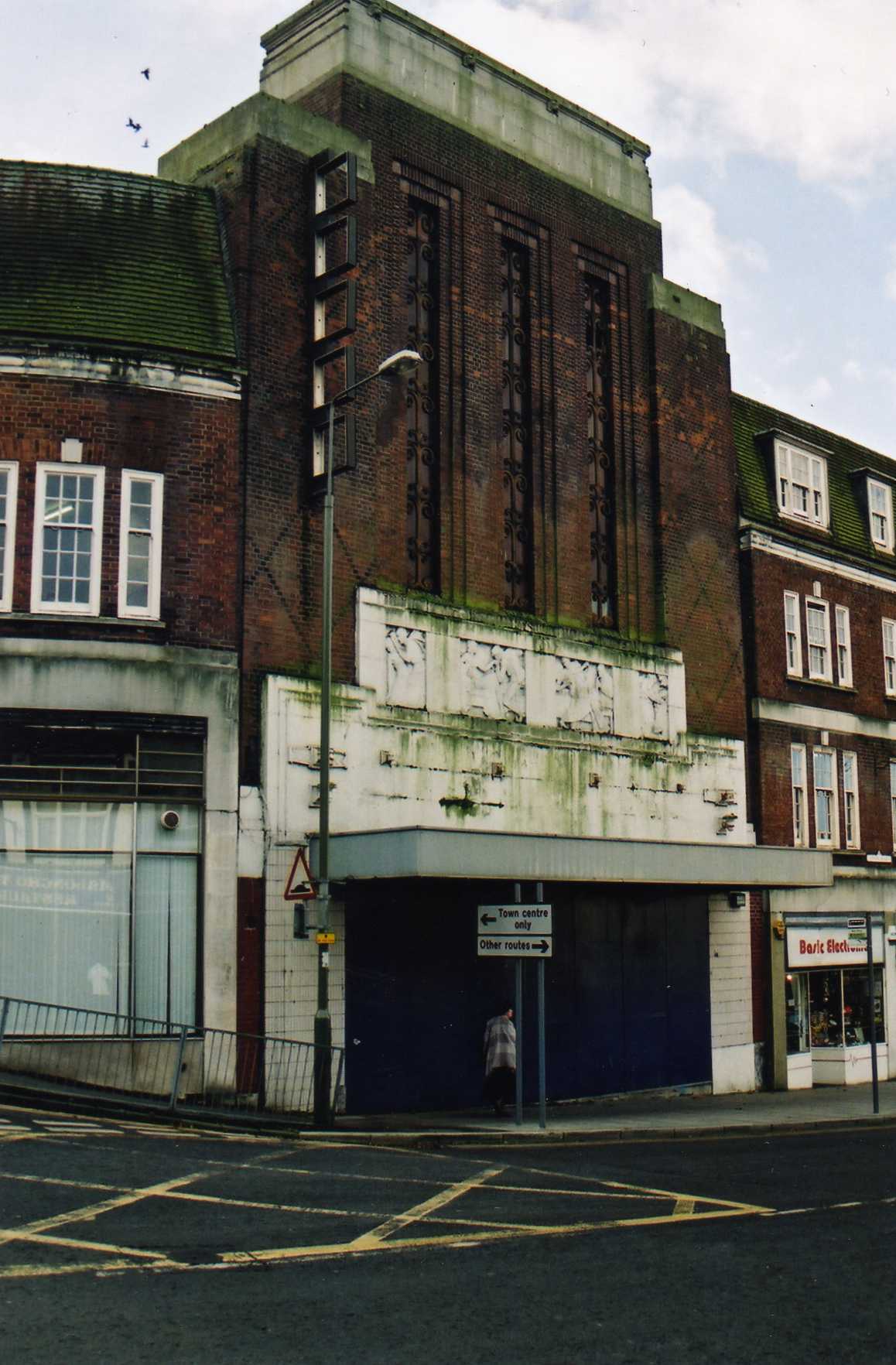 The site as it is today.

"Cineworld" looks more like a home improvement store than a movie theater! Talk about a bland exterior...

Was it AOTC, or the theater itself that put you off, Moth3r?

Why do I get the feeling I've seen this building in a old Doctor Who episode?

The '82 rerelease played in Hollywood, (across the street from the more famous Chinese). The theater was restored (and its original name, El Capitan) but is significantly smaller now on the inside than it was in the 80s, too bad. Sure enough here's the picture they have <snip image>

Wait. Honestly? That theater shrank? Because it's still massive. I love the El Cap but rarely go because they charge such a premium to get in.

My experience stems from only the ROTJ SE and the prequels, but I saw them all here:

The Fox Village Theatre, in Westwood. It's a grand old movie palace that probably looks about the same as it did in the 1930's. 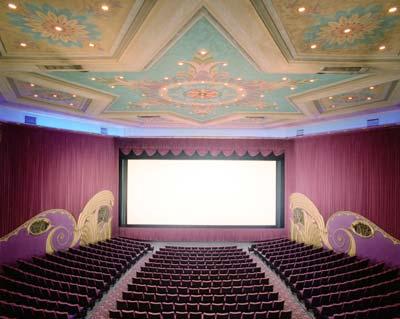 It is a lot larger than this picture makes it look, I can assure you. How many theaters do you know with balconies? Seeing the movies on this screen really brought home that deep down they're all about spectacle.

Why do I get the feeling I've seen this building in a old Doctor Who episode?

It's probably just me.

Doctor Who location filming of the time tended to look more like this :

The building is however penciled in for doom.


Wait. Honestly? That theater shrank? Because it's still massive. I love the El Cap but rarely go because they charge such a premium to get in

I believe when they restored it they went all the way back, to when it was built in the early '30s, as opposed to how it was later, when it was expanded for Cinemascope and renamed Paramount.

The Paramus Rte. 4 Triplex (later the Quad, and then later the 10-plex) closed several years ago. It was the largest screen in NJ. 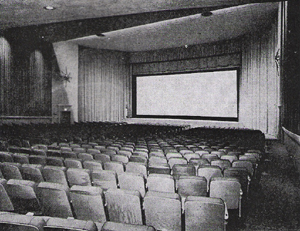 The Loews Astor Plaza in NYC is also gone - now a "legit" theater. 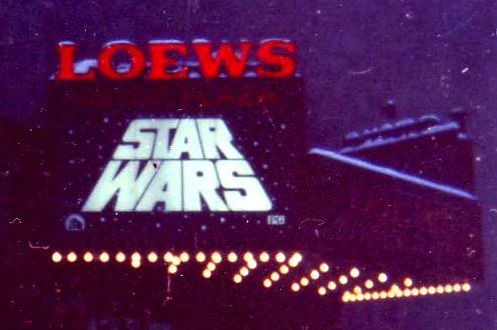 "Cineworld" looks more like a home improvement store than a movie theater! Talk about a bland exterior...

Was it AOTC, or the theater itself that put you off, Moth3r?

AoTC, definitely. I just found it so boring.

My brother and I went to see The X Files movie at Cineworld soon after it had been built, and I enjoyed that experience. I remember the sound (not sure if it was DTS, Dolby Digital or SDDS) being incredible.

Here's the theater called Marilyn where I saw Star Wars Special Edition and The Empire Strikes Back Special Edition, and unfortunately, TPM for the second time. I also saw the TPM trailer here for the first time, I think it was even in the local paper or somewhere that they showed the trailer for the first time so I went to see The Negotiator (I think) just to see it.

It's actually still running even though there has been problems in the past, being closed during summers and it was at least almost going to bankrupt. 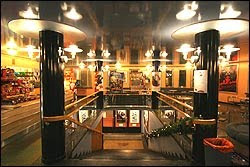 I got the theater showing one of those prints of AOTC that looked like a bad videotape copy. ;)