This was an in-between edit work to scratch my editing itch as I was stuck with heavy After Effects work for other edits. So as a rule this edit was done only in Premiere Pro and a little Audition work to get the sound to match up. 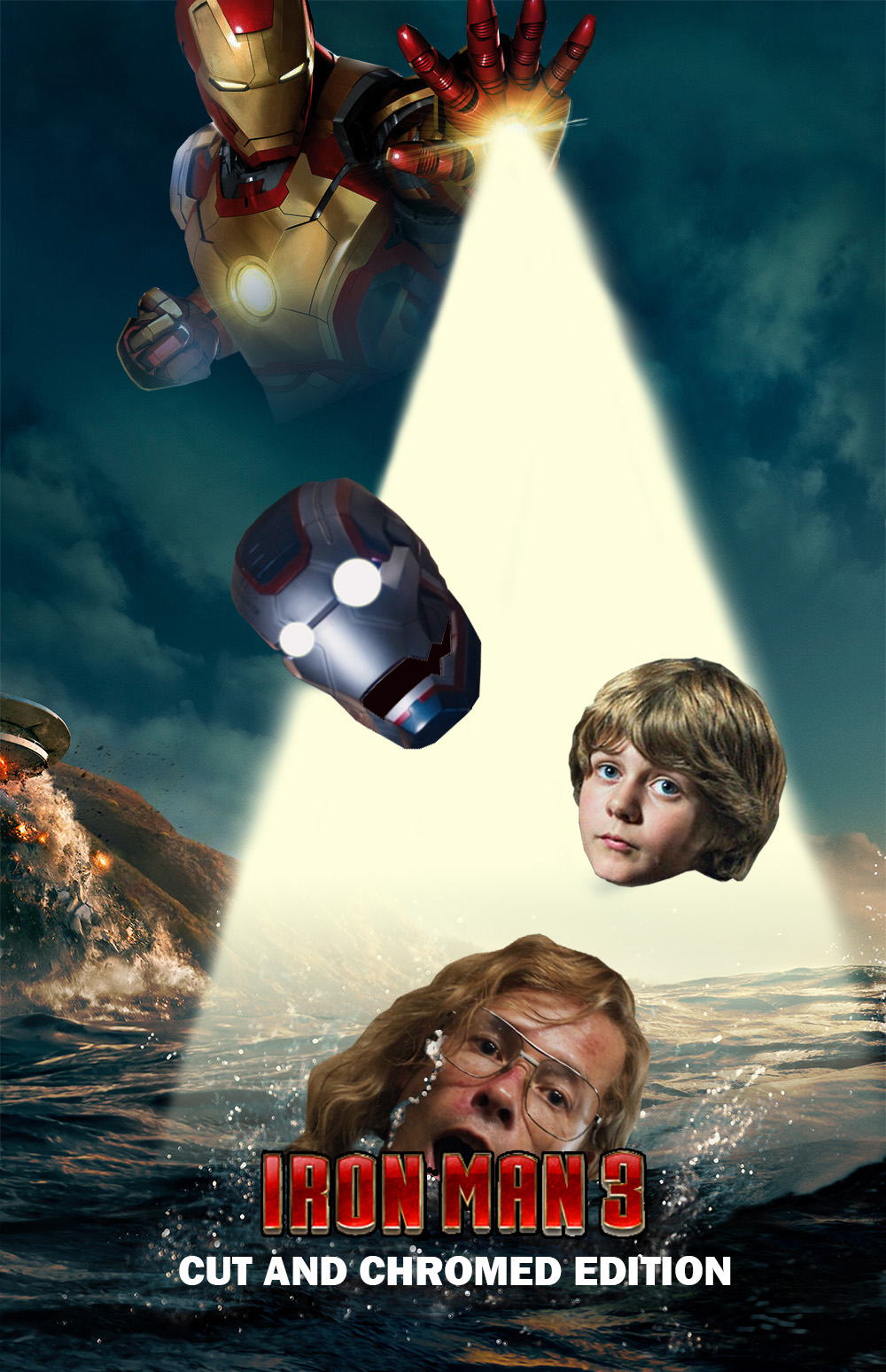 While I’m a big Iron Man fan I never thought this movie was any good except for the big action scenes. The trailer promised an all out war movie against the Mandarin and I was excited to see more action packed Iron Man movie since I thought the previous ones could have had a little more of it. Instead we got ”Tony’s anxiety trip in Tennessee without a suit”. Unfortunately The Predator showed that Shane Black has no clue how to write these franchise movies and he should stick strictly to buddy cop movies. Both this and that movie has major logical holes compared to their previous movies that my nerdy brain just can’t ignore. The Mandarin twist is the least annoying thing for me.

-Why does the new suit break apart from slight touch? It’s made of autonomic parts yes, but doesn’t seem very reliable in combat. Also the paint job ain’t good but that’s a small issue.

-Why does Tony give his address publicly? Although it’s probably easy to find out, he practically invites Mandarin by giving it to the press.

-Why does his new suit run out of power? And is recharged with jump cables??? Did Shane and the other writer even watch the previous movies? Arc reactor on Tony’s chest IS the (main) power source.

-Tony’s anxiety attacks could be OK if a little out of character but are kinda linked to cable charging suit situation so it’s trimmed.

-Following the previous stupidity we watch long stretches of Tony running around Tennessee without his armor but with a kid sidekick. I don’t even dislike the kid actor, it’s just something that I had no interest of seeing.

-Iron Patriot’s paint job is butt ugly 😄(sorry but the flag colors don’t fit on the armor). Also the armor is not any good for the whole movie. Even the villain uses a hand gun when wearing it because the writers forgot it’s packed with firepower.

Many things are trimmed:

This edit is my most radical one yet and trims the movie heavily. 40 minutes are cut when you don’t count end credit scenes. As a result some plot advancements are less than perfect, for example the president is rescued off screen. But apart from that, considering that the movie now runs about 1 h 20 minutes before credits, it IMO works now as a tightly packed action movie.

-Narration voice is GONE except in the end of the movie

-Suit falling to pieces all the time is GONE

-Anxiety attacks are GONE, sleep problems are still in

-Harley the boy sidekick is GONE and most of Tennessee stuff. Tony goes there briefly because his research at home let him there. You can see the kid in one brief scene but he doesn’t talk to Tony.

-Mentions of Thor are trimmed to avoid any thoughts in the viewer’s mind why the Avengers won’t come and help Tony, even though his house been blown up is common knowledge.

New movie title in the beginning, taken from the trailer. Don’t understand why they did not use that trailer one since it’s in line with earlier Iron man movies and looks great.

-New middle credits scene: Trevor get’s a visitor to see him in prison

Logic of the edit (I guess I have to explain since so much is cut):

-When Tony meets Rhodey in a bar there are lines from Rhodey that US military wants to deal with Mandarin by themselves (”not superhero business”), and this is kind of used to justify why we don’t see Rhodey in his armor in this edit.

-It’s implied (with Jarvis’ lines) that villains found a way to jam Tony’s home’s safety protocols and made the place more vulnerable. Also meant to explain why the other autonomic armors were offline. Tony also doesn’t give his home address earlier.

-Tony then drives to one off his off grid- safe houses in Tennessee and does some research in the state from there. The armor is damaged in the home attack so we see censors on it but no hint of recharging.

-Tony now calls Rhodey on a road from Tennessee and it’s implied that he told him off screen to meet in Florida and help storm Mandarin’s lair.

-Kidnapping and rescuing the president is off screen but mentioned.

-The suit now falls apart only in the end (mostly because it was impossible to cut), but it works as sort of distraction for Killian. Also the line about suits only coded to tony at the beginning of end fight is cut because he commands it to go on Killian later.

PM me if you want it!

Can I have a link please? Would really like to see it.

Sure thing, I have sent you a PM!

I liked how you cut a few things that aren’t as important when it comes to US Military and how they’re defending their country to research lab and so many other events that have occurred.

Can I have a link please?