I was watching RotJ the other night and remembered a few parts of the movie I took at face value as a kid (1983-1995) and only realized what was going on the first time I really watched them (November 1995, when I got the Faces VHS set).

Luke's Message: When 3PO says "R2, you're playing the wrong message!" I seriously thought that R2 had indeed played the wrong message.  It didn't really occur to me why I would think that Luke had recorded two messages to Jabba.

Yoda's Race: When Yoda says "When 900 years old you reach, look as good you will not!" I took that to mean that Yoda was just an extremely old human, and if Luke lived to be 900 he would look exactly like Yoda.

Anyone else young enough to have misconceptions like mine?

That's OK, I wouldn't have thought of mine if I hadn't watched the movies recently.

Then wait a few years, and the Kenner Special Offer is!!!!! 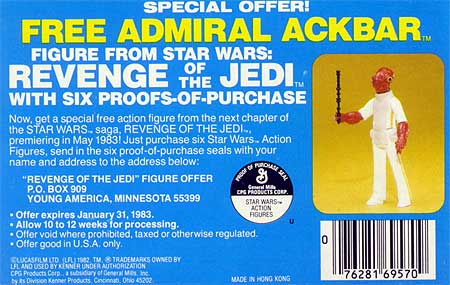 So using the massive brain of a 9 years old I put my celebration of aliens together with a desire to know who the last hope was and Whaaala!

Admiral Ackbar is the Last Hope of the Jedi.

See even the figure came with a black notched light saber.

I saw my first clips of Star Wars (which I had never heard anything about before) on the popular science show Tomorrow's World (an item about the motion control cameras I think) and thought that the Rebel Base control centre was inside an X-Wing hurtling down the Death Star trench (too much Doctor Who I guess, I must of thought they were bigger on the inside).

I also thought Threepio was a guy in a suit of armor.

I read the comic book adaptation of Star Wars before seeing the film but I didn't read it right which was odd because I was normally very particular about words and had quite a high reading age at 7.

I thought Ben used to be called Ob Van Kenob and he was helping the Rebel Lions for about a month.

Well... does calling a Lightsaber a LifeSaver for at least a year count?

It kind of is a life saver anyway, right?

Yeah. I think I did that from 4 to 5... maybe up to 6. And at the time I'm pretty sure I'd only seen Return of the Jedi (depending on how long it the VHS tapes to come out compared to the theater release).

Then wait a few years, and the Kenner Special Offer is!!!!!

So using the massive brain of a 9 years old I put my celebration of aliens together with a desire to know who the last hope was and Whaaala!

Admiral Ackbar is the Last Hope of the Jedi.

See even the figure came with a black notched light saber.

I usually feel bad for making threads, but your post makes the whole thing worth it.  Thanks none!

As part of the dying breed who saw the Holiday Special first, we are warped.  and a tad stoopid.  But you wants a black notched light saber now… Don’t you!

I would be upset that the most popular thread I've ever made (as in "has more than two replies") will be taken over by Ackbar pics, but Ackbar is the best part of the internet.  BRING IT! John Williams score to Return of the Jedi Remastered/Remixed:

Childhood Misconceptions (aka The Trap Thread)

Scroll down to the comments where the following phrase is born:

But was that really the Origan of this Origanal statement. So googleing and this gem of a misconception appears:

Subject: The greatest Revenge came from a kid. Yup!

(Speaking about the young Boba Fett)

It was painful to see his own father die on that arena that day. And he promised to get Revenge, and he did, by multiplying into thousands and that way assuring his revenge on the jedi. The greatest revenge in the galaxy came from Boba Fett, not the sith.