This project is intended to improve Batman Forever as both a film, as well as keeping it in line and tone with Tim Burton’s two movies, since it is part of the same continuity.

Batman Forever is a film I never thought I would be making an edit of. I’ve never been a fan of Joel Schumacher’s two Batman films, even if it was Warner Bros who made this and Batman & Robin the way they were. I figured this movie, just like Batman & Robin, was an unsalvageable mess.

However, it wasn’t until I took a deep dive look into this film’s production, as well as what it was trying to be. The deleted scenes were quite fascinating, and it would be interesting to add them back in. However, the tone, flashy neon presentation and Elliot Goldenthal’s cartoony score, which adds to the animated feel of the film really don’t help. I decided to do some color correction to the film to look closer to Batman, while also not severely ruining the natural look that’s already there. Another aspect is re-scoring the film with work by Danny Elfman from his Batman films, Sleepy Hollow and others. Joel McNeely’s cover of his Batman work on The Batman Trilogy album also plays a role in this film’s new score too. Finally, the film will be trimmed and restructured to feel much more focused when it comes to its narrative and tone.

A big thanks goes to CamSMurph for suggesting ideas and being an inspiration for this project. Full disclosure, I will not be doing an edit of Batman & Robin, as I personally find the film unsalvageable in terms of re-editing, despite enjoying it as a “so bad it’s good” experience

I present the third of my Batman edits. 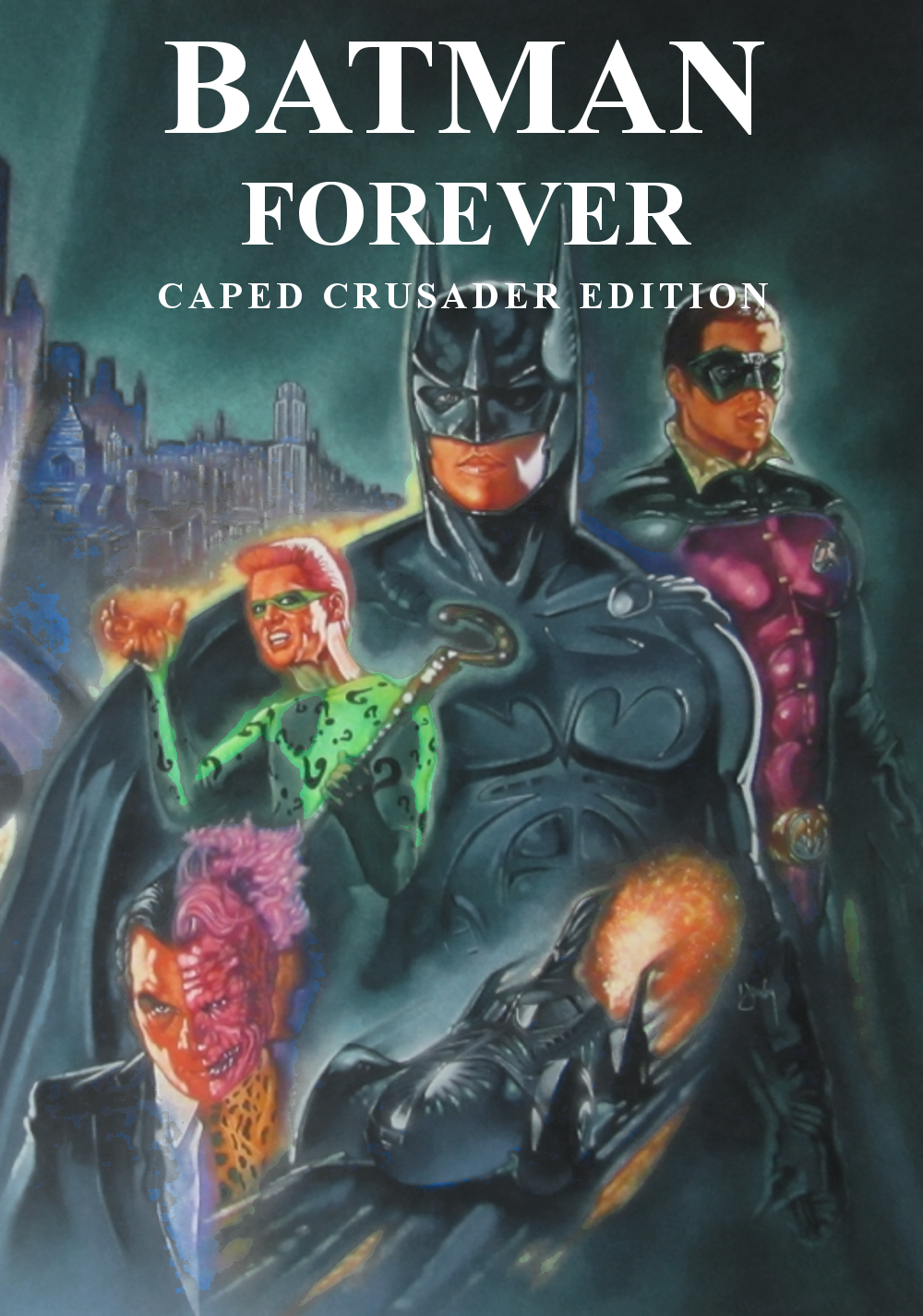 Removed almost all cartoon sound effects from the film.

Added in the deleted scene at Arkham Asylum, revealing Two-Face’s escape. Also added in some new shots of Arkham from Batman & Robin.

The original opening credits have been removed and replaced with a new sequence, resembling Tim Burton’s Batman films.

Added shots of the Moon, Wayne Manor, and slightly trimmed the suit-up sequence, adding in shots from Batman & Robin. Also removed the drive-thru joke between Batman and Alfred.

VFX will be needed to remove the opening ending credits text from the beginning of the film.

Trimmed the exterior shots of the second bank of Gotham.

Replaced the shots of Batman gliding down with brand new ones from older Batman commercials.

Removed Chase’s line, “Hot entrance,” replacing it with a shot of Gordon.

Removed Two-Face’s lines, “Let’s start this party with a bang,” “Blast him” and “Open sesame.”

Added the alternate angles of Batman kicking down Two-Face’s henchmen from the trailer.

Added the alternate angles of Batman grabbing one of Two-Face’s men from the elevator shaft and throwing him into another.

Removed the guard’s “Oh no!”

Removed Two-Face’s cackling when delivering his message to Gotham on the helicopter.

Removed the guard’s disapproval and approval of Batman’s orders.

Trimmed away more of the guard whining during the bank heist sequence.

Removed the reaction shot of the guard on the vault as it’s falling.

Added in a new shot of Gotham City, along with a text card to stay in continuity with Burton’s films.

Removed the audio of the news report on the bank heist sequence.

Moved Bruce Wayne’s visit to Wayne Enterprises and conversation with Nygma prior to the bank heist sequence.

Slightly trimmed Nygma showing Bruce his invention before explaining its function to him.

Removed the sequence of Bruce using the underground tube transportation.

Moved the rooftop scene between Batman and Chase to after Alfred’s conversation with Dick.

Trimmed Chase’s line about Two-Face’s coin, now that the scene has been moved to later in the narrative.

Trimmed some of the flirtatious dialogue between Batman and Chase.

Removed some of Nygma’s excessive lines when finishing his invention.

Removed Nygma’s line, “Caffine’ll kill ya!” Added a transition to black, with Stickley waking up without Nigma poking at his mustache.

Removed Nygma’s, “Which one? This?”

Removed Nygma’s, “Hang on,” as well as his lines to Stickley after falling out of the window.

Removed the scene of Nygma returning to his apartment to make his next riddle.

Cut Bruce getting lost in Chase before telling her about the riddles.

Cut Bruce and Chase acknowledging the answer to the first riddle.

Added in an establishing shot of Nygma’s apartment from earlier that was removed, prior to him watching the circus on TV.

Muted Two-Face’s laughs and cackles throughout the circus raid.

Trimmed away Nygma laughing as he watches the circus massacre.

Removed Chase calling for Bruce and a shot of Nygma watching the massacre on TV.

The sequence of the death of the Graysons has the sound drowned out for a dramatic effect, as the music plays out.

Faintly added Jack Napier’s line, “Do you ever dance with the devil in the pale moonlight” over the shot of the silhouette of the killer.

Removed the car chase sequence between Batman and Two-Face.

Added an establishing shot of Wayne Manor at day to transition to the deleted scene between Bruce and Dick.

Added the deleted scene of Bruce consulting Dick over his pain and anger towards Two-Face.

If it’s possible, it would be great if someone very talented with VFX could digitally remove Jim Carrey in Riddler costume standing in the background of Two-Face’s lair before walking into the scene.

Cut Riddler talking about Batman’s depression, as well as his mocking cry.

Added the deleted scene of Batman getting tricked into where the crime is taking place. Added a shot of the Batmobile from earlier that was removed from the chase sequence. Riddler and Two-Face drive off afterwards.

Moved the scene with Dick asking Alfred about the door to the Batcave has been moved prior to Bruce watching GNN.

Removed the shots of Riddler and Two-Face taking turns using the Nygmatech box to allow the panning shot of the public’s intelligence being drained to play out as one long uninterrupted shot.

Removed the shot of Dick waving at Alfred.

Cut Chase’s, “Rage, violence, passion,” as well as the kiss.

Cut Dick trying to pick up girls in the Batmobile.

Re-dubbed the girl’s line from the one used in the trailer from, “Doesn’t Batman kiss the girl” to “Did you forget the part where you kiss the girl?”

Removed the girl’s line, “Thanks! You saved my life!”

Used an alternate take of Batman leaping off the fountain and punching one of Two-Face’s men from the trailer.

Removed Alfred handing Dick his acrobat suit in order to keep the surprise for later.

Removed the shot of Two-Face blowing Batman a kiss.

Removed Two-Face dancing as Batman is engulfed in flames.

Added the deleted scene of Bruce watching GNN and an extended conversation with Alfred afterwards. Removed the line, “I’ve never been in love before, Alfred,” with Bruce looking at the monitor featuring Chase.

Trimmed Chase’s lines from the scene where Batman visits her at night, to make it seem that she isn’t lusting for him.

Cut off Riddler and Two-Face’s scene after Riddler gives a riddle hinting at Batman’s secret identity.

Removed the scene of Riddler and Two-Face arriving at Wayne Manor.

Cut from Chase finding out Bruce’s identity to Alfred opening the door, only for Riddler and Two-Face to ambush him.

Removed Two-Face’s failed coin outcomes. He only flips the coin once.

Added the deleted scene concluding the red book subplot prior to the Chase tied up in the Riddler’s lair. Shots from earlier have been added to help the sequence play out a bit better.

Removed the lines, “Who the hell’s doing that?” “The Riddler!”

Removed the shots of Batman’s fist and butt.

Removed the shot of Batman giving Gordon a thumbs up.

Removed Riddler’s reaction to shooting down the Batwing, as well as him mentioning the black box.

Cut the reference to the 60’s show involving Batman and Robin.

Removed Robin’s revenge lines as he beats up Two-Face, as well as many more of Two-Face’s cackles.

Trimmed away some of Riddler and Two-Face’s reaction shots.

Recut Two-Face’s death so Batman doesn’t throw up several coins, as he falls to his death on his own. VFX needed to remove the various coins from some shots.

Removed Riddler’s final laughs on the shot outside Arkham.

Added the deleted scene between Chase and Alfred, along with an establishing shot of Arkham.

Added a shot of Gotham City with the Batsignal in the sky prior to the shot of Batman and Robin running in front of it.

Replaced the songs in the credits with pieces of Danny Elfman’s work.

Updated the Warner Bros distribution logo at the end.

As much as I liked this movie as a kid I’m going to have to go with the Batman 89 comic version of two face for its tone and keeping Billy dee Williams as two face despite some issues I have with the 6 issue comic. but I am looking forward to your edits of Batman and Batman returns

As much as I liked this movie as a kid I’m going to have to go with the Batman 89 comic version of two face for its tone and keeping Billy dee Williams as two face despite some issues I have with the 6 issue comic. but I am looking forward to your edits of Batman and Batman returns

I like both the Burton and Schumacher films but I have major issues with the claim that they are in the same continuity. They are nothing alike in basically every respect.

That would be interesting to see.

Good luck on your efforts! I won’t be making edits of Nolan’s trilogy, as I see it as one of the definite iterations of Batman, and it’s one of my favorite trilogies of all time.

Good luck on your efforts! I won’t be making edits of Nolan’s trilogy, as I see it as one of the definite iterations of Batman, and it’s one of my favorite trilogies of all time.

It’s Not definitive to me it took away elements from the comics the Lazarus pit joker falling in acid etc babe and the venom etc. and Batman voice sounds stupid.

If you all like what you see here, definitly check out my edits I did for Superman (1978), Superman II and Superman Returns. I think the Man of Steel deserves more attention these days than the Dark Knight.