• Could the editing of ROTJ’s ship battle scenes for The Battle Of Endor have been affected by ‘Black Friday’?

This is very much just me spitballing…

I was reading through the intriguing B-Wings in ROTJ, editing epiphany 2011 discussion thread on here, and got to wondering if some of the ‘haze’ / confusion around some of the Battle Of Endor footage, and perhaps some of the editing for these scenes… may have been a result of ‘Black Friday’?..

By some ‘haze’ and ‘confusion’ I mean the disappearance of the B-Wings from scenes mid-way through the Rebel attack.

This is especially in regards to the scene where Wedge’s informs both Red 2 and Red 3 to “pull in”, Red 3’s “Got it” reply, immediately before being blown up whilst she is flying over a larger Rebel cruiser, by two Imperial fighters on her tail, who are then themselves destroyed by a Y-Wing.

There is also the confusing ‘edit chop job’ using a duplicate shot of a Rebel pilot to try and portray 2 Rebel pilots?; ‘Gray Leader’ and ‘Red 2’ - Who is Red 2?.

These scenes can be found in the videos linked below… 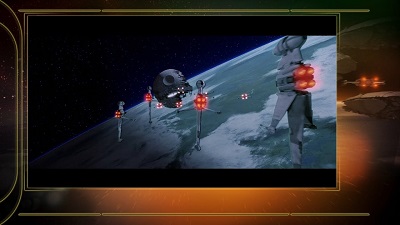 ^ a 1 minute video with B-Wing designer Bill George on the original plans for the new B-Wing ships to feature in more scenes for the attack on the Death Star II in Return Of The Jedi. And also the reason why they didn’t:-

“unfortunately because the wings were very very thin, when it got pretty far away on the blue screen, the wings had a tendency to disappear. And because of that it played a less significant role in the attack of the under-construction Death Star”

Indeed, when watching the Battle For Endor scenes there are seemingly no B-Wings featured on screen in the DSII attack, after Admiral Ackbar utters the now-legendary meme-etic words of “It’s a trap!”… 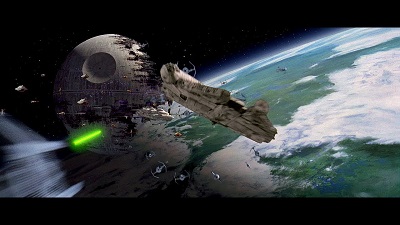 As can be seen from some of the few deleted scenes released on blu ray ‘extras’ re for the Battle Of Endor in the videos below, there was indeed filmed footage of pilots in their B-Wing cockpits - including a Sullustan and a Mon Calamari. Yet unfortunately no B-Wing cockpit shots were used in the final film. 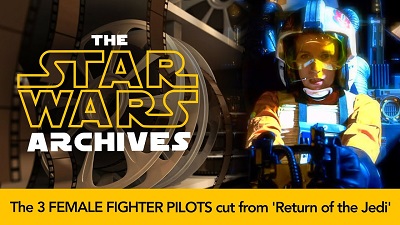 'The 3 Female Fighter Pilots Cut From ‘Return of The Jedi’:- 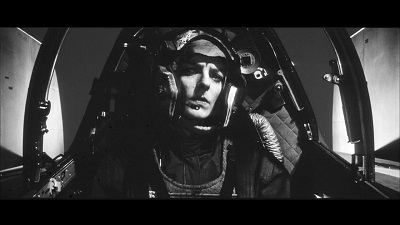 ‘Return of the Jedi: Battle of Endor: The Lost Rebels’:- 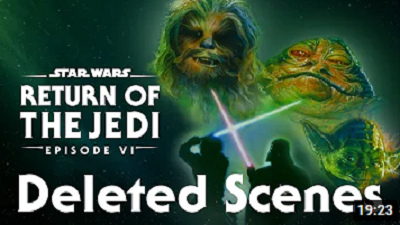 ‘Return of the Jedi (Deleted Scenes)’ (including B-Wing and Rebel pilots):-

Additional info on the B-Wing ships, their pilots, and flight suits… can be found here:-

The ‘Scenes Cut from Star Wars’ wookieepedia page also has some information on cut scenes for Return Of The Jedi, with both complete, and incomplete scenes for the Battle Of Endor:-

This ‘Star Wars Afcicianado’ article at also has some additional information as to the female pilots in ROTJ:-

Some quality Nilo Rodis-Jamero concept art for the B-Wing uniforms, & more B-Wing info and images on the pilots and ships:-

This article also has images of B-Wing pilots in their red flight suits - as well as some appearing in green flight suits too:-

Many of us are familiar with the famous piece of concept art by Ralph McQuarrie depicting B-wings taking on and destroying an Imperial Star Destroyer, made for Return Of The Jedi:-

The more modern adaptation on McQuarrie’s B-Wing concept art (as appears on StarWars.com’s Databank page for the B-Wing):- ^ It seems this concept art was based on a planned idea for part of the story in the Battle For Endor… and likely not completed or shown on-screen due to limitation of the B-Wings being filmed in distance shots on a blue screen at the time (as mentioned above).

Yet the offscreen/unshown events of this aspect of the story from the Battle Of Endor, told in full, below…

It was inspired by artwork depicting an unused battle scene from Return of the Jedi, and the story focuses on a squadron of B-wing starfighters on a suicide mission during the Battle of Endor.

Blade Squadron is the first Insider short story, and the first story outside of the films and The Clone Wars TV series, that is part of the new canon, as defined since the April 25, 2014 reboot. The story was later reprinted on StarWars•com.’

The ‘Blade Squadron’ story that was re-printed on the official Star Wars website, can be found here (from 2015):-

From the ‘Blade Squadron’ at Battle Of Endor page - https://starwars.fandom.com/wiki/Blade_Squadron#Battle_of_Endor

'Blade Squadron participated in the Battle of Endor, led by Wing Commander Adon Fox, as a full B-wing flight and many of the detachment’s newest recruits flying their first mission. Upon realizing the trap the Empire had set, the squadron’s rearguard mission was promptly aborted, and Blade Squadron was reassigned to attack the blockade of Imperial ships. Adon Fox ordered his B-wings to target the Imperial-class Star Destroyer ‘Devastator’.

The ‘Devastator’ was successfully destroyed along with Admiral Jhared Montferrat, its commanding officer. This cleared a pathway for the remaining Rebel Alliance starfighters to start their attack on the Death Star. Blade Squadron suffered heavy losses, including the death of Blade Leader at the hands of Commander Gradd’s TIE Interceptor’ 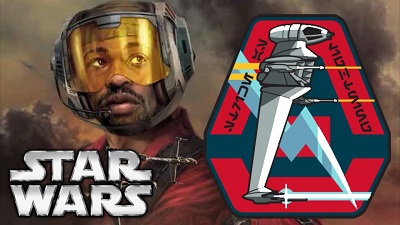 www.youtube.com/watch?v=3td7PmuCVfc - a 3 and bit minute video at the Star Wars Explained youtube channel (in 2017).

In the storyboards for Return Of The Jedi, there are also these images of B-Wings attacking and destroying the shields of Vader’s ship; the massive 'Executor’ super star destroyer - and NOT the A-Wings as shown in the final film (this is shortly before the screaming A-Wing pilot flies into its bridge and takes the ship down):-

^ in the description given for this image in the book ‘Star Wars Storyboards: The Original Trilogy’ is… 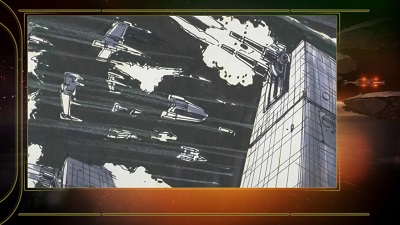 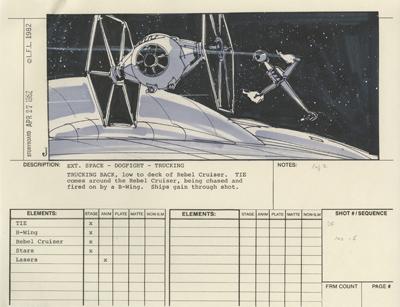 One more image of two B-Wings firing torpedoes to be scanned and put here - from the ‘Star Wars: Storyboards - OT’ book.

^ The above is a re-creation script - including scenes from shooting schedule in Philip Peecher’s 1983 “Making of Jedi” book:-

I started out with the shooting schedule in Philip Peecher’s “Making of Jedi” book, making a list of scene numbers with locations. From there, I took the published version of the script and matched up the text of the scenes with the numbers of the scenes as provided by Peecher’s book. Since the list in Peecher’s book was incomplete, I had to rely on call sheets found on the internet to flesh out it further. Then, since many of the call sheets so closely match the dialogue in the novelization, I conclude the novel is based on the shooting script. I used the novel as a guide to fill in the rest of the scenes. I don’t know if it is 100% accurate, but I think I have it pretty close.’

Even if this isn’t the case - and if ‘Black Friday’ has nothing to do with the editing of the ship battle scenes for the Battle Of Endor - or lack of B-Wing footage - it would still be fantastic to see those seemingly forgot-about ‘thrown-out’ shots… or hear more about these shots in more detail, and how they would play into both the story and the battle footage scenes…

So if you know of, or have heard of, any mentions of these shots… please post them up in here, as well as your ideas and thoughts as to whether ‘Black Friday’ may have had an affect on the way those scenes in ROTJ were edited (or not)…

Despite there now being four Special Editions of the Original Trilogy films (1997, 2004, 2011, and 2019), it is a both somewhat baffling and disappointing that George Lucas did not revisit the Battle Of Endor scenes. To later include or re-shoot the additional B-Wing footage… that could not be included because of the technical limitations and design of the B-Wings at the time of filming… to complete more of his original ‘vision’(s) for the films…

Though adywan’s Return Of The Jedi: Revisited Edit just may attempt that : Ideas thread for adywan edits : ESB & ROTJ Wishlist

And just because it is a cool fun watch…

www.youtube.com/watch?v=cfcI_SVTGVA - a 4 minute video with Bill George talking about how the overall battle was shot.

I’ve still to check through the following…

… for additional mentions of B-Wing footage / additional ship or effects scenes at the Battle Of Endor / ‘Black Friday’.

I’m in much need of some new reading glasses for book reading - so it may take a while for me to do.

If anyone has these scripts, books, or other sources to hand, and wishes to contribute content from them (as well as their own comments, thoughts, takes, and ideas), please do. 👍