Here is some progress on the grading. What do you think?

We already have reached 110€ in pledges and most of it is already paid. So that’s good news and just 190€ is left to ship and scan the print. Thanks to all donors who already paid in advance. 😃

Thanks for the technical input. It is quite interesting what you are describing. But for now I am also amazed that there are many tools to extract the fade as good as possible. Before I got the rendered file of the second reel I didn’t believe it myself that this is possible. Of course, with the resources we have it will never be like “the Leopold” with an over a million dollars restoration-budget from Scorsese, but it will be enough to enjoy the movie.

You’ll be very happy with the scan quality, it has a good Sony Pregius imager with a low noise floor and a very good backlight which also makes a big difference.

I have not the liberty to say much about the scanning contact for obvious reasons, but you are right with the sensor. The examples I have seen were so good that they have convinced me. I was thinking about 4K for scanning in the first place, but decided going for this opportunity. It didn’t make any sense to me not just because of the print itself, it would have been more expensive and I couldn’t justify it myself(again we are talking about the difference between 3,5K vs 4K). While I gained more experience about the details of scanning since then I think even more that it was a good decision now. But feel free to put some perspective of yours in it. It is just interesting to speak about details and differences on technical specs 😃

Thanks SpacemanDoug. Any contribution will help to continue this project. When you have questions regarding the quality of the print etc, don’t hesitate. 😃

Anyone who is interested in a 35mm-version. Any help is needed:

This has been haunting me for a long time and finally there are news in this project which I can finally share with you. I had the opportunity to snatch a 35mm copy of Amadeus (1984) in his glorious theatrical-cut on eBay in February 2021. Even though I did not know much about the difference between the theatrical and director’s cut, I came across with the thread here on this forum about the contribution of jimbotron235. I take the opportunity to thank you here for your amazing project which also motivated me to have a focus on obtaining the 35mm-Copy of Amadeus (1984):

I saw this movie for the first time in our school’s music class, my teacher loved it so much that we watched the entire movie in two sessions. Over the years, this classic became the prototype-movie of a character study for me in which two masters of their time try to either preserve their dominance at all costs or gain the fame they deserve through talent and competence. Told from a retro perspective, the protagonist is able to see his mistakes and shortcomings. Through this perspective, it becomes a psychological homage on forgiveness and regret.

When I saw this copy on eBay, I didn’t hesitate to buy it without bringing it up here first. I also wanted to make sure that the quality of the film is sufficient since it is an old print from the 80th copied in East Germany. The seller was upfront and honest in the first place and clarified that the colors faded, or more precisely: faded to magenta.

I was in contact with Dr.Cooper about this during that time and he reassured me that there are strong tools to overcome this issue already. He is also going to help me and guide this project with grading and restoring the whole film. Since it is my first project, I am thankful that he offered his help.

A couple of weeks ago, I also found a good opportunity for scanning the whole thing in 3208 x 2200 Pixels (approx.: 3,5K). Since I already got a test-scan of the second reel, I can confirm that the shift is relevant, but not the big deal I was afraid of. Although I am new to Davinci Resolve, I was able to tune down the magenta-shift with ravishing results. I think with the help of Dr.Cooper there is a lot more to get out of the print. Despite the fact that the print is not in a pristine shape regarding the fade to magenta, it has this magic only film is capable to reproduce. Currently I can only speak for the second reel, but there is not much dirt or many scratches on the film. I did some screen-caps for having an idea about how it is going to look later.

Just keep in mind: the copy has German optical-mono-sound, so nothing fancy, but it is still good to listen to and at least from an archival perspective also interesting to preserve as well. Dr.Cooper mentioned the English Laserdisc-Track which we can sync to this release, and there is also the DD-track on the DVD from 1997, which is mentioned by jimbotron235 in his Amadeus-Thread. Any help here, is also welcome.

My plan is to scan the rest of the film and restore the colours as soon as possible. Therefore, I need donations for scanning, shipping and storage, which will cost roundabout 300€ in total. The print is already paid. Therefore, I will take pledges towards the scanning costs, shipping and storage. When the project is funded, I will collect the donations and then order the scanning right away. The release will be exclusive for donors. Anyone who is interested in preserving this classic in 35mm is welcome to help covering the costs, please send me a message.

Here are some screen-caps. They’re illustrating the magenta-shift and also hopefully, what we can get out of it. Please keep in mind that these aren’t final results. I used a roughly rendered 1080p-file, which has just 8-Bit and 4:2:0. I can fully trust the scanning opportunity, since I know them and I have seen very good results already.

I started collecting donations for the reason that no unnecessary delay will happen.
221€ are pledged. So just 79€ left to reach the goal. 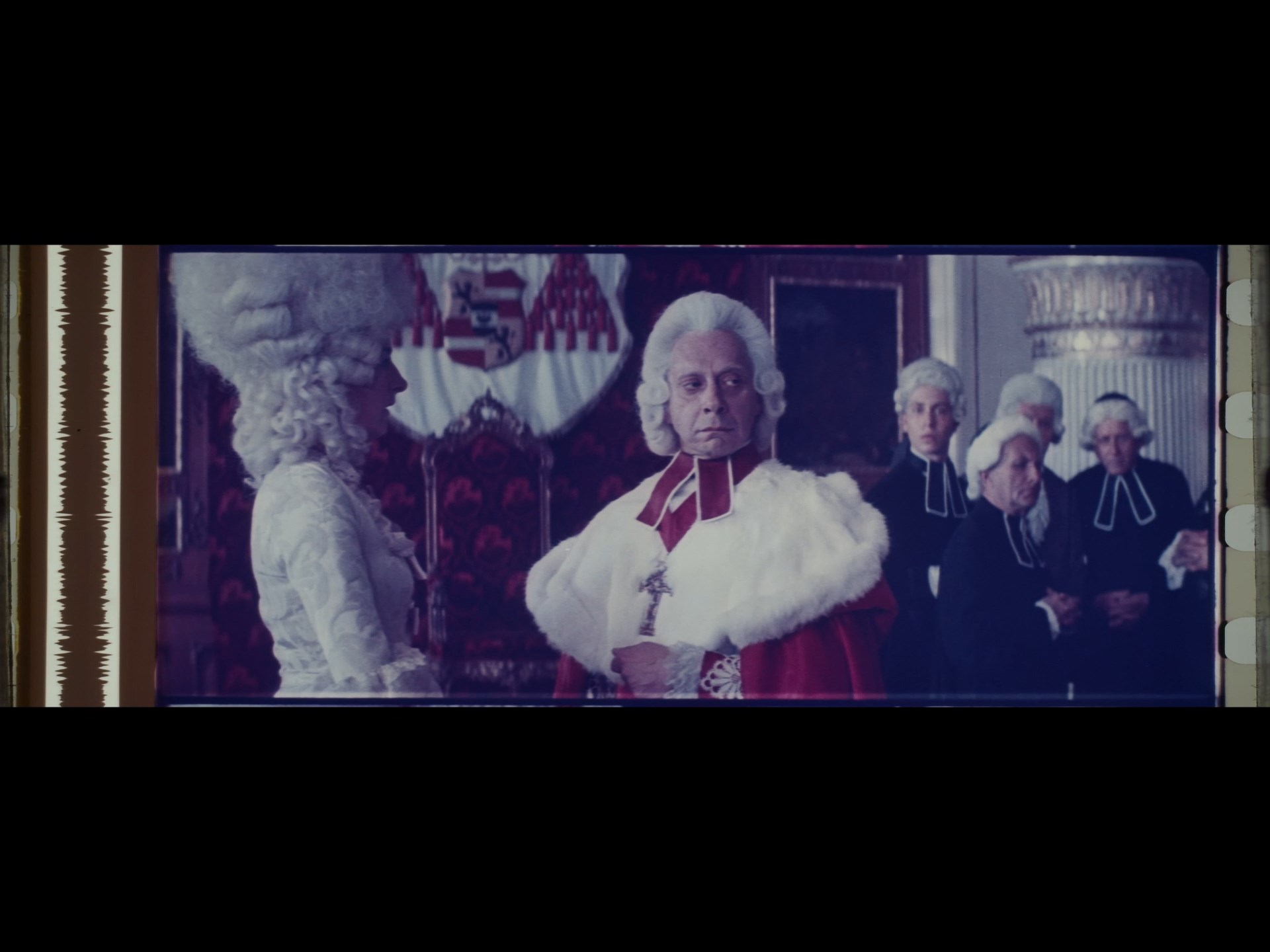 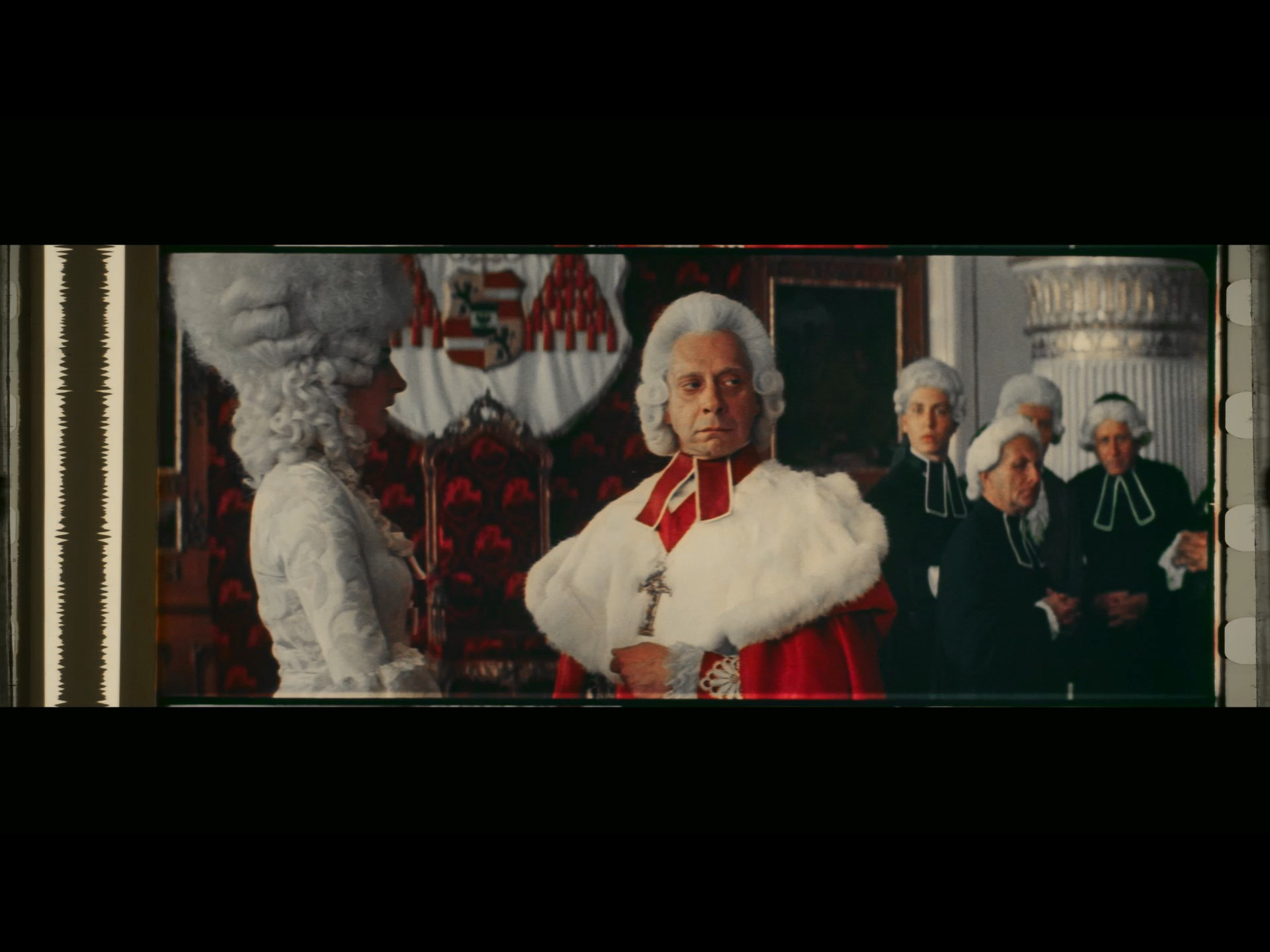 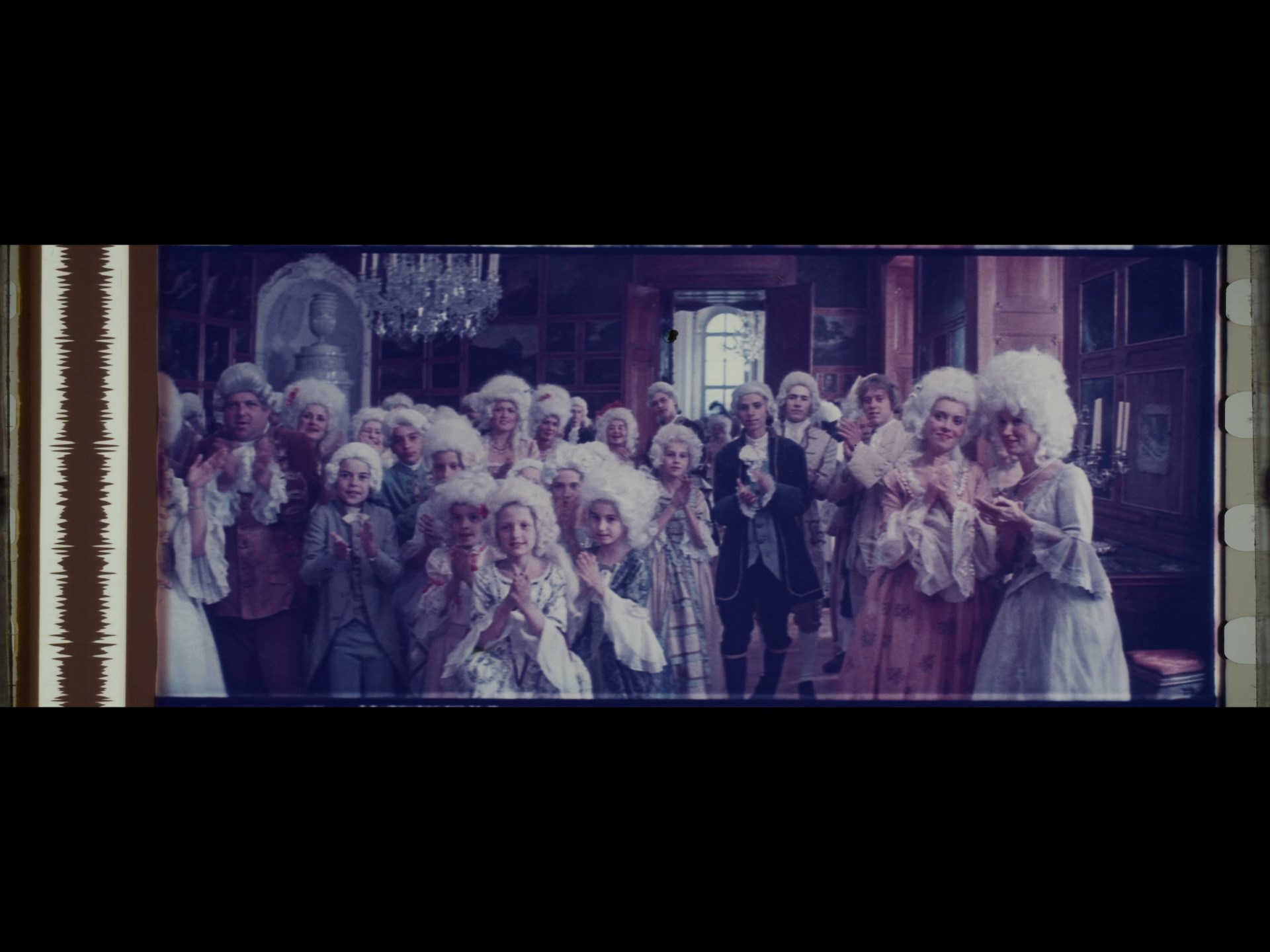 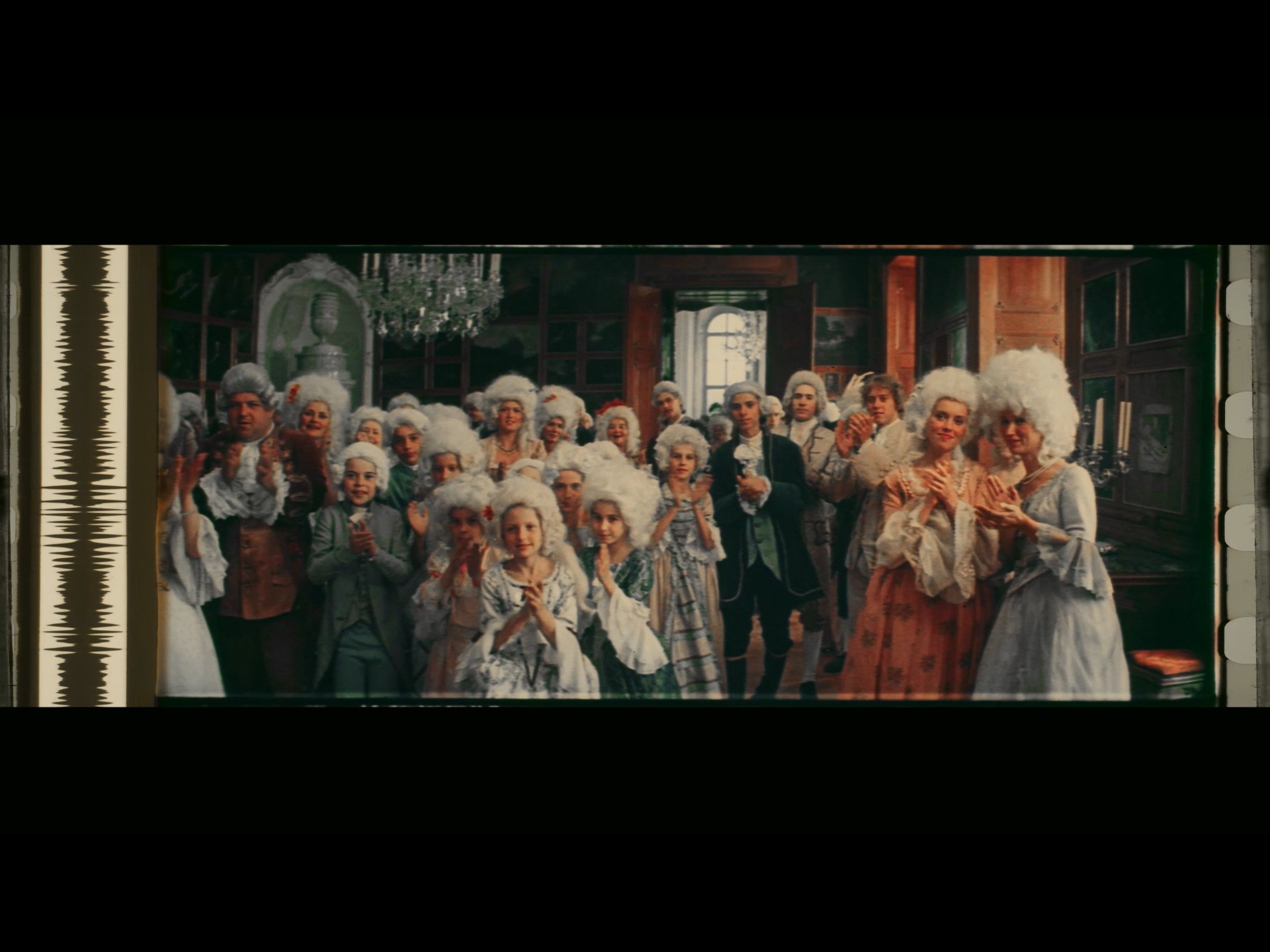 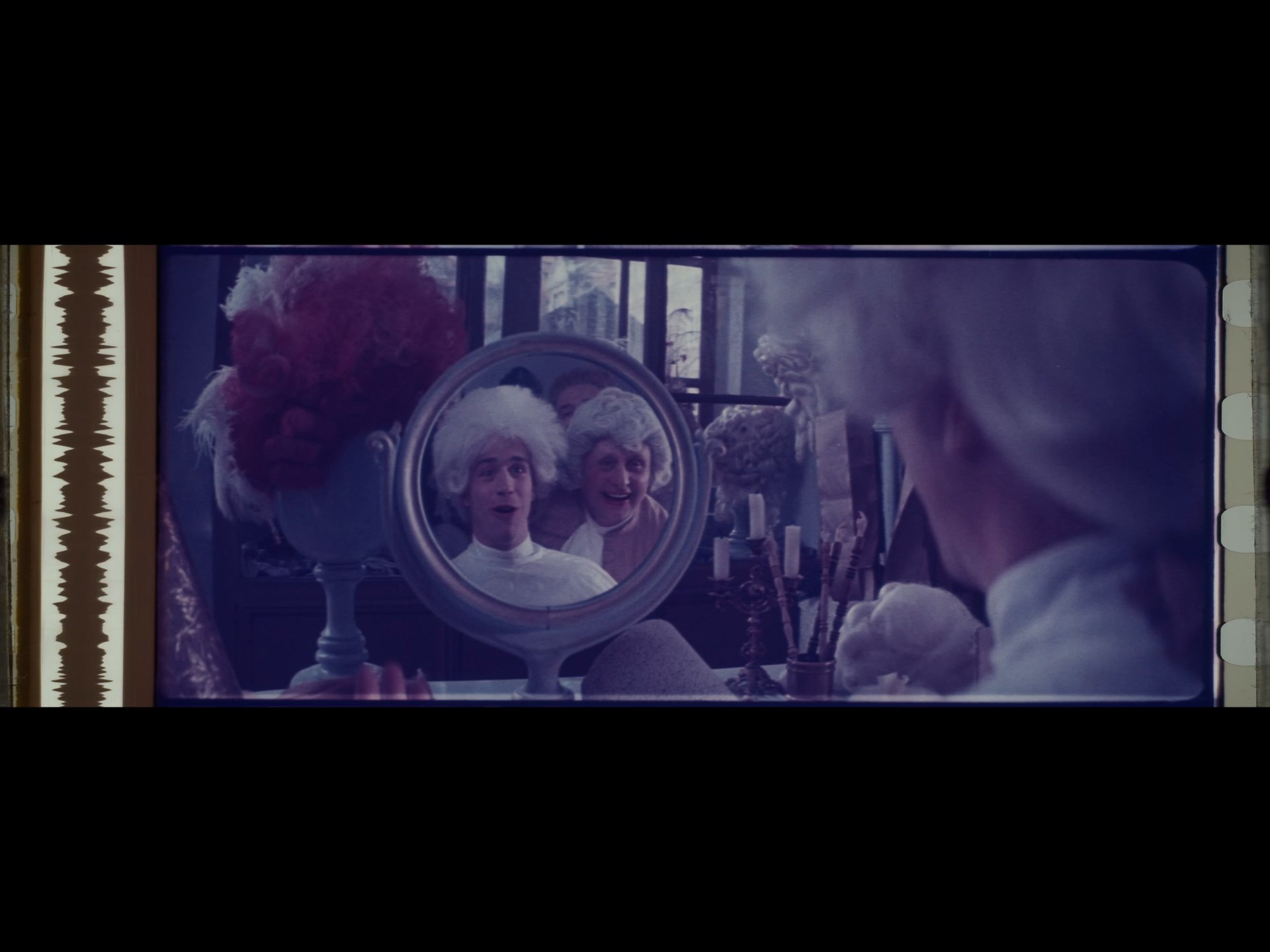 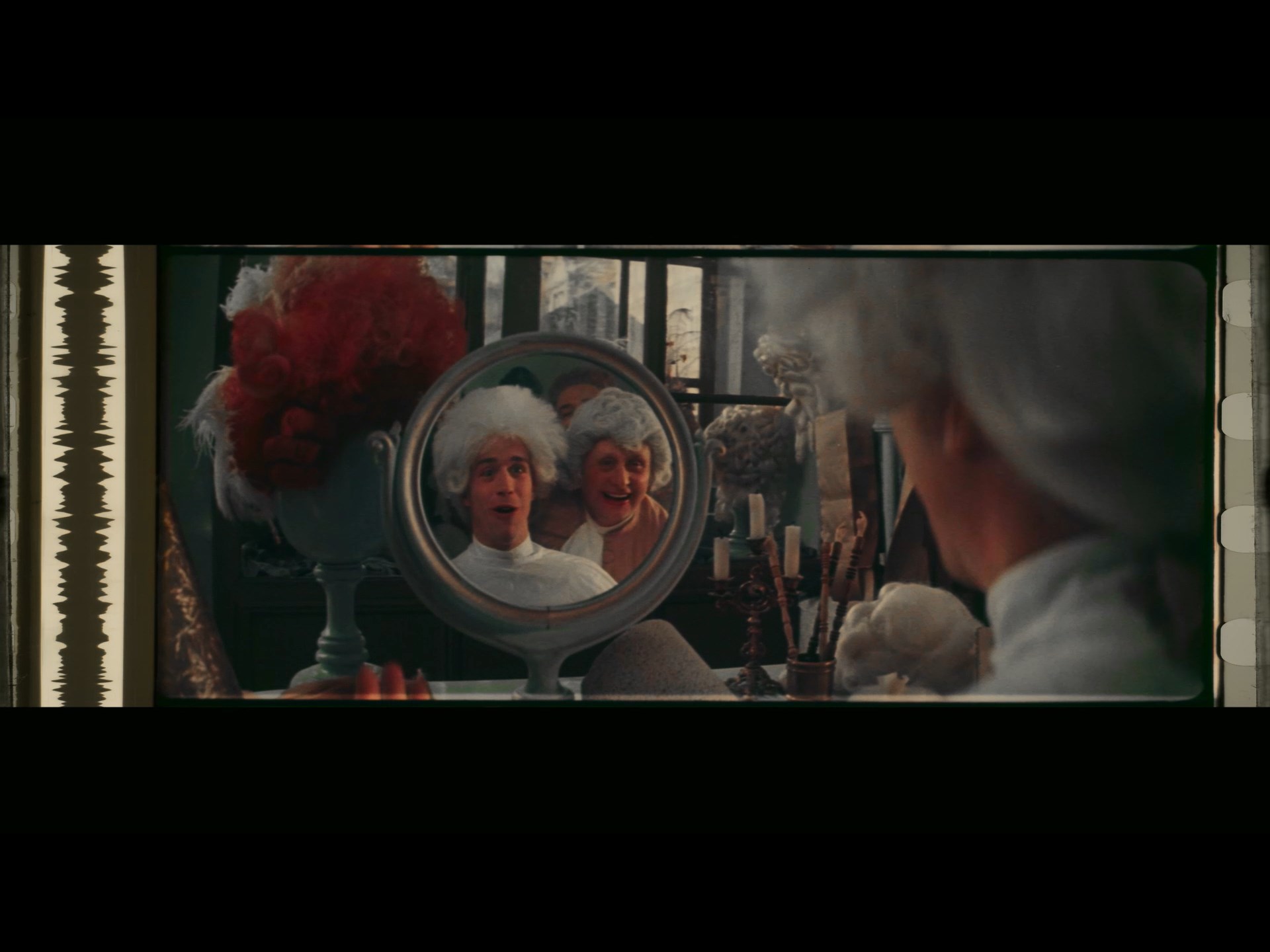 Brian Dooda draw a very specific timeline when Mono and Stereo-tracks has been used and he backs it up with the noise-reduction types, which were used back in the days. In Conclusion Dr. Cooper nailed it with Dual-Mono and silver-wook with the compatibility of the sound system used in different theatres. 😃

@marin888
Are you involved into this italian-project?

This looks quite good. What are you other plans?

Me too!😃
BTW: Is there anyway you can show us the colour-correction side by side, I mean the differences obviously:)

Hey there, thats sound incredible nice for having found any prints regarding this film. First of all what is your goal fro donations? Furthermore have you checked if the picture is cropped from a Scope 1:2,35 version or is there more room on top and bottom in comparison, it would be interesting if its made from a 1:2,20 Scope-print. How long is this version?
Most importantly: Do you want to scan the prints you have ASAP or scan it along with the prints you would like to find in the future?

Right now I can donate 20 bucks, if it helps.

I would assume after having this scanned we can say a lot more about it. I doubt that the 4K-disc is not faithful or not enjoyable, but its not a 35mm-print anyway. Look at capsaholic, there is a comparison between the old(imho very bad bluray) and the 4K disc.

marvelous, thank you for that. this looks more organic than the blu

Let’s assume a single person donated all the money that was needed.
Tough luck for anyone else wanting to contribute, and see the print?

If that would happen, lucky for everyone! My assumptions: it’s not just one movie we want to have, right? If anyone contribute to a next project, they’ll get access to the old ones as well.

In your unrealistic scenario all the other donators would need to give just a smaller amount of money to get realized an access to a film. And projects in this forum get a wider release anyway sooner or later, it might happen that in this case, open access would be possible earlier than usually.

In a realistic scenario it looks like this: it is a long run to get the money together, even if there are generous donators, not only the buying of a print, scanning costs and cargo, initiators needs to have lots of terabyte of stationery storage, a high-end computer and screens to manage all the work, and do need time.

All in all, donations always helps, even small amounts. If anybody has another realistic and sustainable way of realizing to scan films, please let me now;)

This will be a great job, the Blu is terrible as it can be and the HDTV-version is as good as it can be. A 35mm-Scan is the absolute reassurance of getting it right, since we do not really trust Disney in faithfully transfers without enhancing the f**k out of the films.

(And the thing with donations: without donations, there will be no scans anyway, and without having this done in an exclusive way (kick-starters work in the same way), nobody wants to donate anything, this sad but true. Anyway: The scans usually appears on myspleen or on Blutopia at a later time, I see no problem in it.)

This is great news, I am in.

want to join in

I hate to say it but it’s been nearly a year and I still can’t get a copy of this release. I saw Aladdin at Greater Union cinemas in Civic, Canberra when it was released and fell in love with it. To this day I have the original poster up in my computer room along with a collection of Aladdin toys, characters etc. The ‘release’ ins’t accessible so be sure to reply with ideas other than Blutopia. 😃

Same, I’ve been able to get a myspleen account but not Bluetopia.

Would love to get BACK to Blutopia… I am a member that got banned while in my month away from my computer while moving, getting married, and going on my honeymoon.

Same here: I also got banned and dont know really why…