Saw that the Extended TV Version of Red Eye was listed on the first page, does anyone know if this was definitely the version on Amazon prime? According to the running time the one on Amazon UK is the regular version. Been looking for the extended version for a long time.

This looks fantastic! Do you have plans on giving other movies Criterion menus and features?

The first one that comes to mind for me is Se7en CCEHD which is an HD version of the movie color matched to the Criterion LaserDisc.

That one is actually on the list to do at some point, as are Hard Boiled, The Killer, Blood for Dracula, Flesh for Frankenstein, Menace II Society and Jason and the Argonauts.

Another project complete. Pretty much all the credit for this goes to spoRv, as the video and audio is taken from the Halloween Fundamental Collection. Aside from being authored as a blu ray, the main benefit of this project is all the special features from the Criterion Laserdisc are preserved and as far as I am aware some of them never have been before.

Unfortunately it’s not easy to gets images of blu ray menus as a decent player like PowerDVD has the screenshot facility disabled and a not very good program like DVD Fab can’t handle the menus correctly, but I did manage to get the image below.

PM me for the links, contributing members only please. 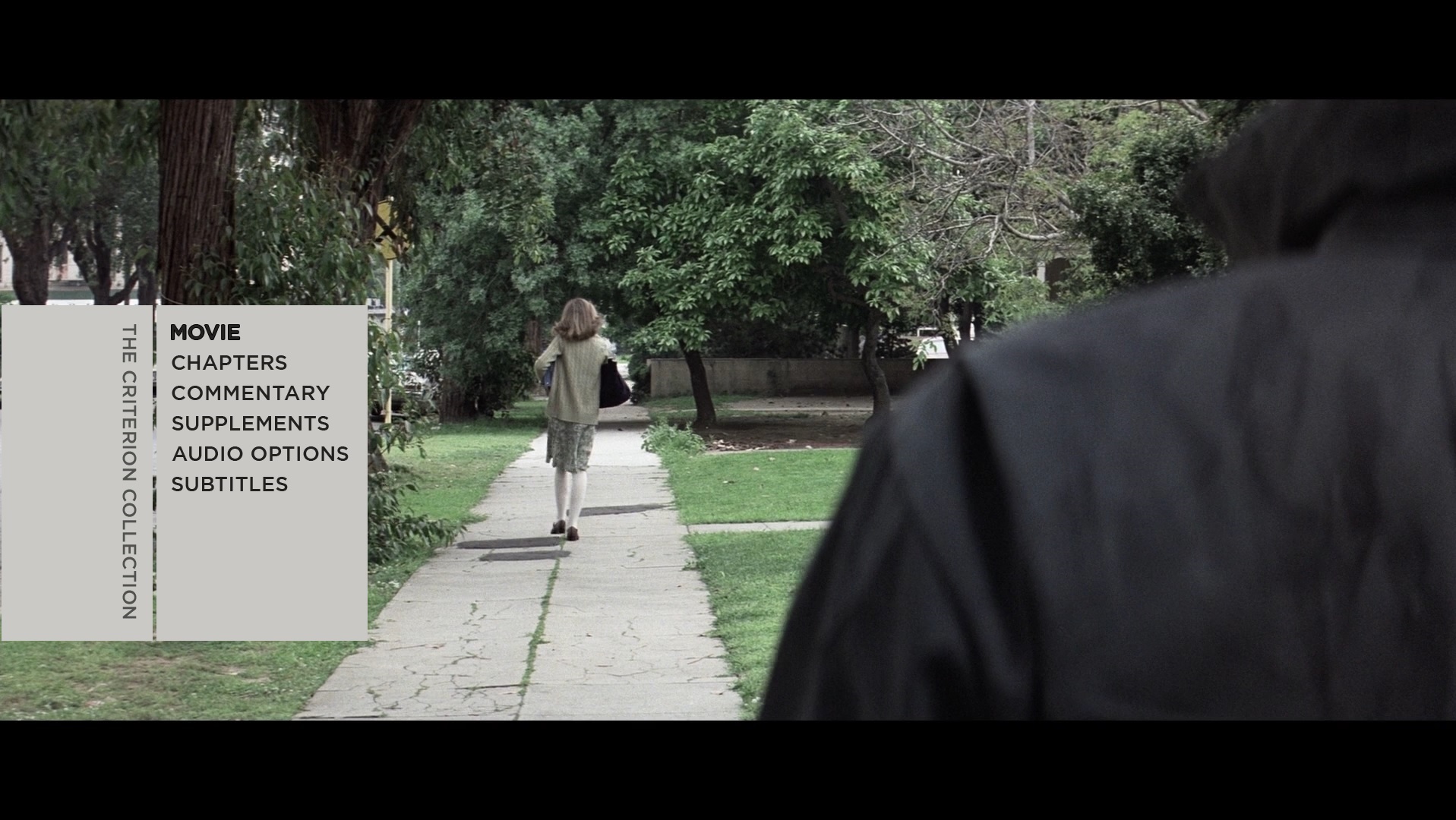 Each movie is on it’s own BD25 with menus that look and behave like the official Criterion discs, with pop up menus and resume function. The video for each is taken from the Blu Ray with the original MGM / United Artists opening logos restored and they use the original Criterion chapter marks.

Special thanks to FanFiltration for the original DVD project and The Aluminium Falcon for the LD audio.

From Russian With Love:

PM me for the links.

In case anyone missed this:

The Daleks are back! In black and white, and on YouTube! The metal monsters are once again menacing secret service agents from Earth on the planet Kembel, in a recreation of a Doctor Who adventure not seen since 1965.

Using the original script, replica props, vintage TV methods and the contemporary voice of the Daleks, Nicholas Briggs, the missing episode Mission to the Unknown has been remade by film and media students at the University of Central Lancashire. The recreation premiered on the official BBC Doctor Who YouTube channel at 5:50pm on 9 October, exactly 54 years after the story was broadcast for the one and only time.

It is unique in the original Doctor Who series for being the only episode not to feature the Tardis, Doctor or any of his companions. Instead, it was a standalone story starring arch-enemies the Daleks, which acted as a prequel to a later 12-part adventure The Daleks’ Master Plan (and quite possibly, in the mind of Dalek creator Terry Nation, as a pilot for a Dalek spinoff series that never materialised.)

Would a Dalek spinoff have worked in 1965? On this evidence, yes.

The episode sets up a galactic war between humans and Daleks, and an undercover security force sent from Earth to thwart them. It introduces an alliance of alien races, who are determined to invade the solar system alongside the Daleks. You can easily imagine a multitude of further stories set in this universe.

It is probably the only Doctor Who episode that could be completely remade convincingly in this way. The lack of regular cast involvement means there’s nobody trying to imitate William Hartnell as the Doctor, and the characters of Marc Cory and Gordon Lowery (played by Marco Simioni and Dan Gilligan) get to establish themselves on their own basis over the 25 minutes.

Inevitably, given the source material, it is a bit stilted, stagey and even slapstick at points. But the recreation of the Daleks, and the way they are shot in stark black-and-white, is effective. The Kembel jungle and the dangerous Varga plants look comparable to 60s Doctor Who sets, and the Dalek death ray effect is true to the source. The storyline is quite slight, though, making this an interesting curiosity rather than a ‘must see’.

It says something about the mythical status of the missing Doctor Who episodes that what is essentially a student project has ended up getting a run-out on the BBC’s official YouTube channel.

There are still 97 episodes of 60s Doctor Who missing. They occasionally turn up, most recently in October 2013. However, Mission to the Unknown was never sold overseas, meaning there is virtually zero chance of it ever being found.

The production took five days in February 2019, and former Blue Peter presenter Peter Purves, who played the Doctor’s companion Steven in 1965, visited the set, saying: “This is an absolutely wonderful project. I can remember at the time that Bill Hartnell and I were a bit miffed not to be included in any way at all … but it was a nice week off in the end!”

This blu ray contains all four episodes of the extended miniseries edition of Hateful Eight.

The disc is BD-J, created using professional software with resume function and menus. There is the option to watch individual episodes or the whole series. I would strongly suggest burning this to a physical disc as software blu ray players don’t always handle menus well.

For some of them I already have all the special features captured from the laserdiscs but I am missing those below. I really want to create faithful restorations and include every bonus feature even the less significant ones, but unfortunately I do not have a laserdisc player anymore. If anyone out there can with capturing the items below that would be a great help and much appreciated.

Most of these are still image galleries, if someone could capture them I would only need a few seconds of each as I’ll extract the images and build slideshows.

Hopefully someone out there can help, and if they can then the finished products will be posted on here.

Jason and the Argonauts (numbers are Chapters)

Behind the scenes footage

I did not create the video for this project myself, but I am posting here with the full blessing of the anonymous person who did. This version has never been released officially, all home video versions have been 3D Anaglyph so they use the paper glasses not the glasses that come with modern 3D TVs. It turns out when the DVD was created it used one of the cameras and the Blu Ray used the other, so the person who created it used combined both, to create a ‘proper’ 3D effect. This took an incredible amount of time as every frame needed to be aligned and colour corrected so the two matched.

This has since shown up on the internet as an MVC video, which is the way official 3D blu rays are encoded. The problem with the MVC version is the quality is reduced, as this project was originally made as half SBS and then someone re-encoded it to MVC. The benefit of MVC is your 3D TV may not automatically detect Half SBS as 3D, you might have to tell your TV via the remote control. So take your pick but I prefer better quality.

This is not the best movie ever made by far but this should hopefully be the most complete edition of it. This combines five different previous editions into one, including two rare bootleg releases from Albert Pyun himself.

This custom made blu ray contains:

This project has taken a while but it is now complete. It’s a faithful reconstruction of the Criterion Laserdisc with the following:

This is on a BD25 Blu Ray disc with menus and resume functions. This has been made to mimic the way an official Criterion Blu Ray looks in almost every detail. I took screenshots of every menu page from an official disc and rebuilt them, with animation exactly the same way as Criterion does. I built a background video using clips from the movie which were then slowed down to half speed. The only things that are missing from the official Criterion menu is the ability to set timeline points that you can return to (possible but I don’t think I’d ever use it) and the resume menu (the official discs ask you if you want to resume where I prefer it to just resume without asking). To give you an idea of the work involved this disc uses a total of 194 menus behind the scenes to make it work!

The one thing I wanted to do but couldn’t was include the original Criterion chapter marks, I don’t have them so had to use the DVD chapter timings.

This will be the first of many Criterion preservation projects.