Grievous didn’t seem like the joke he was in other incarnations.

Better voice actor(s) aside, this 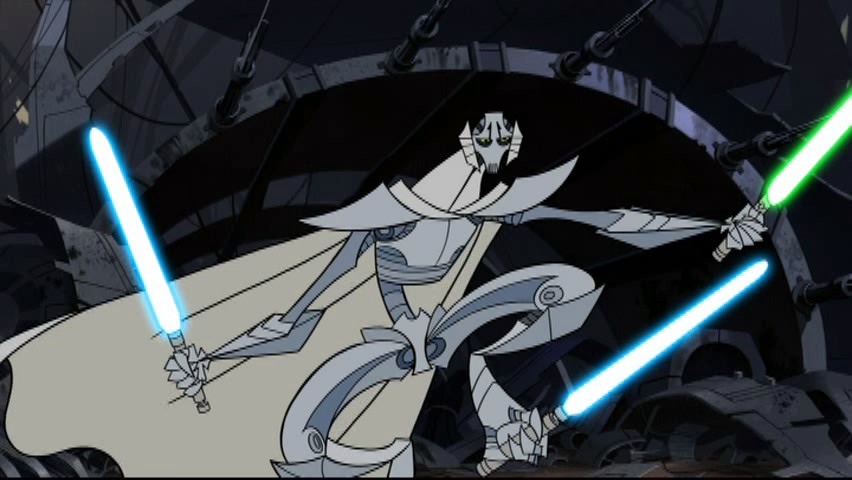 is just as laughably stupid as any of the stunts he pulled in ROTS and the CG series.

Because nobody else will legitimately answer… No… its not… I don’t see any gungans beating him up in that… enough said.

Dumb moments aside, I far prefer Clone Wars in both style and content to the later series. It was the only Clone Wars material (including AOTC and ROTS) that made it feel like there was actually a war going on. The scene/episode where the commando clones are taking out battle droids using only hand signals is the best Star Wars I’ve seen outside the original trilogy. I also never liked Ahsoka; even after she eventually matured and became way less annoying the damage was done.

Wannabe Scholar said:
(In TCW) some of the villains are lackluster when compared to the micro-series. General Grievous is practically the Cobra Commander, because I always see him running away and/or getting his butt handed to him. Also, I felt the stories in TCW were all over the place and didn’t tell that much of a consistent story (at least not until the later seasons). In the micro-series CW, I always thought the villains were a threat as they were ruthless and calculating. Not so much in TCW.

I also agree with this, Ventress was badass and Grievous didn’t seem like the joke he was in other incarnations. They all seemed much scarier villains, including Dooku.  (That bike-jousting guy did suck though).

Durge or the bike-jousting guy was also an amazing villain and here is why: He doesn’t talk creating a mysterious intimidating villain creating for tension when he first fights obi-wan. He also starts with a bike jousting fight which sounds stupid but all of star wars was based on fantasy stories, the jedi are literally space knights, them putting space jousting in makes complete sense and had more thought put into it then anything in the 2008 clone wars. Also him having regeneration puts a very powerful enemy into the show allowing for more tension.