GOOD NEWS! The project is finally finished and can be downloaded in two RAR files totalling 19.66 GB. Shoot me a PM for a download link.

Hmm, interesting! I suppose that would be a step in v2.0! I can’t be sure of bitrate and any quality loss from streaming compression, so I’ll still definitely continue this effort to have a lower compression version for those who want to watch, unless, of course a BD comes out. I understand that apparently Coppola or whoever’s in charge of HV releases has a bad habit of having some, well, let’s just say “confusing” methods of choosing what version goes where.

If Amazon video has the theatrical version in HD, wouldn’t there also be the risk of it being pan and scan?

To answer that question, I don’t believe so, unless they have some reason to use a 4x3 or 16x9 master, which I can’t imagine why they would. Also, I dug into it a little bit and the amazon version is probably not a high definition version of the theatrical version. In fact the amazon reviews from people talk about it being the director’s cut when you watch the film from amazon. I have seen several TV airings and they either use the complete novel version or they use the theatrical from the same SD master. Again, I can’t be certain about amazon, but I do doubt they have the theatrical in HD. If someone can confirm/deny this with screenshots and/or footage, that would be awesome, thanks!

Thanks! I already sent the user a higher quality, less compressed version, but that’s a great way to watch it, too!

Awesome! I saw a video by SpaceHunterM who pointed out some of the differences here:

It’s pretty interesting to look at. Definitely gonna sync this up to the 4K restoration. 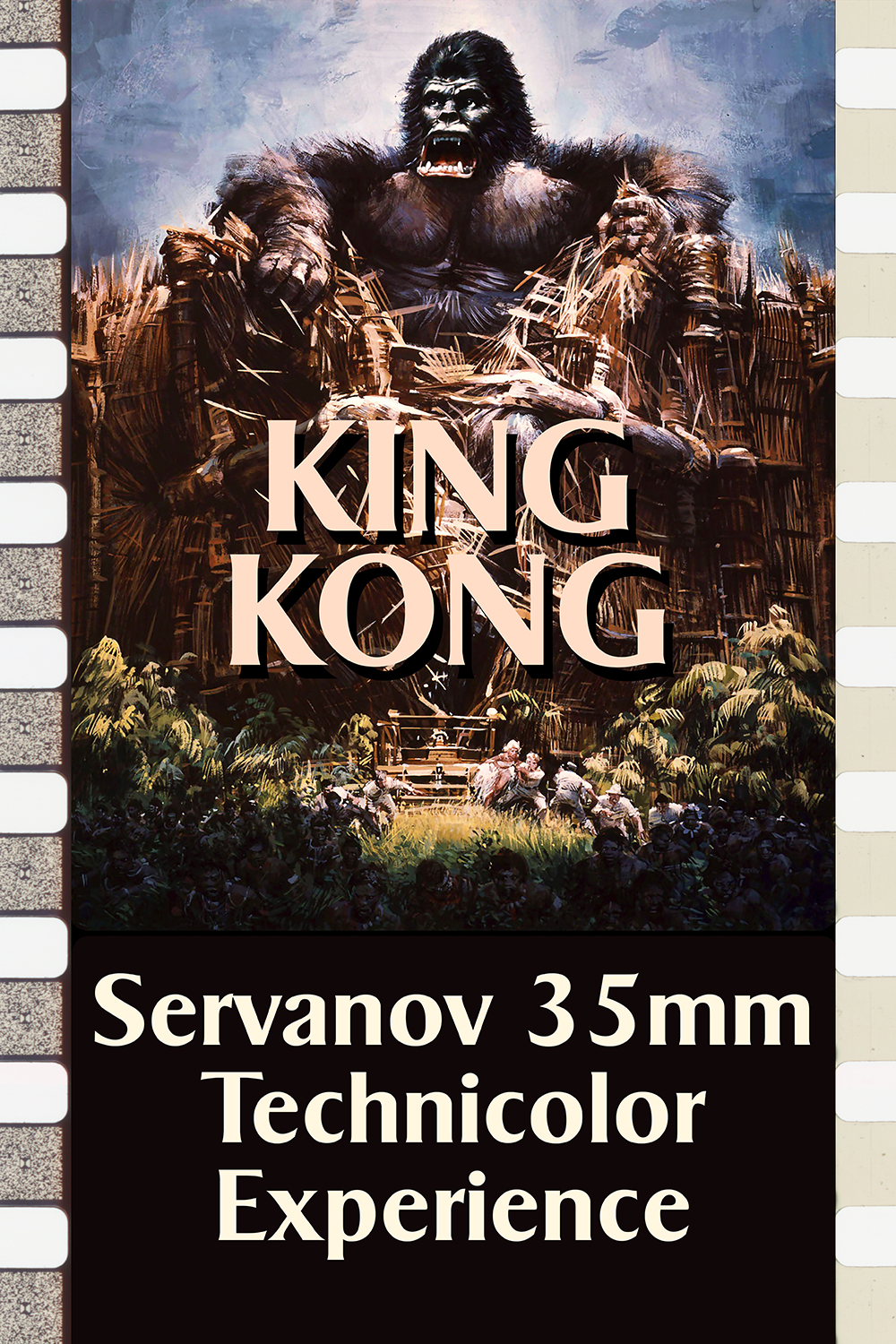 Hope everyone’s staying safe these days. Stay inside if you can and be sure to wash those hands often! I’m quarantined at home and while I was home I thought I’d take a break from cleaning up the scan of 1985 and do a fun little project with one of my ultimate guilty pleasures, the 1976 version of King Kong.

I was watching the Blu-ray and noticed it looked very… clean. Too clean, in fact. DNR everywhere, unnatural grain, decent but artificial colors. I thought what better way to improve my own (and maybe even yours!) viewing experience by doing what I did for the 2014 Godzilla by “film-ifying” the BD to make it more 35mm-y.

But I knew that wasn’t enough. The film was shot on 35mm, so it would look unncessarily dirty and grainy, with no real benefit over the Blu-Ray master, so I had to go even bigger. Then, I realized the perfect fit for this project:

Recreate what it would have looked like to watch a 35mm I.B. Technicolor dye transfer print of King Kong.

Now, before anyone gets confused, let me clarify, there were most certainly NOT I.B. Technicolor dye-transfer prints made of the 1976 King Kong. The dye transfer process was last used in the 70s in the film “Suspiria,” and wasn’t revived again until the 90s (coincidentally, the 1998 Godzilla apparently went out in the new dye transfer process). So no, I did not have a 35mm Technicolor print to reference, as they did not exist. What my aim for this project is is to recreate what it [i]would have looked like[/i] in the color and texture and aesthetic of what it would have looked like if the dye transfer process had survived long enough for Kong to be given the I.B. treatment. I used my knowledge of technicolor prints, from seeing a few screenings and seeing scans and having a decent idea of what that color looks like on a film. Because I couldn’t find any resource for where the reel changes were in the film, I decided to stay safe and not make any assumptions and omit reel cues. If I ever find a resource for where those were, I will definitely add those to the list of things to change for v2.0.

Also, because I was able to grade the film for technicolor with a single, overall pass, I was able to produce a LUT for it, as well, which I will include for you all to use on any project you want to “Dye-Transfer-ify.” I can’t promise it will work every time, and it might take some tinkering, and for some sources, it might simply not work at all for certain sources. But, it should be interesting to see.

I plan to release a 1080p version, which should fit pretty nicely on a Blu-Ray disc if you so desire. Be on the lookout!

THE PROJECT IS FINISHED! This fan-edit can be downloaded in two RAR files totaling 19.66 GB.

Here’s some screenshots of the project: 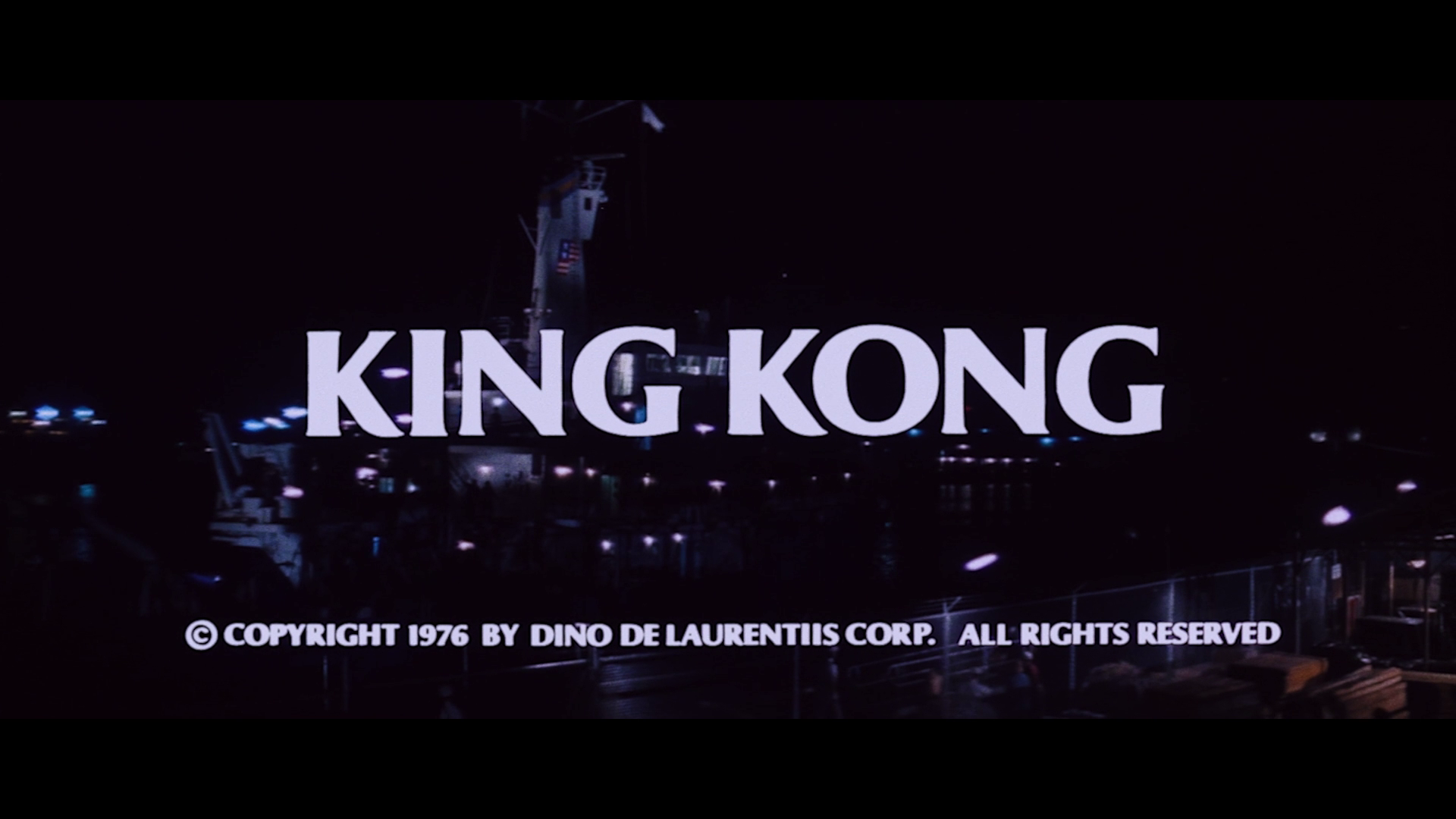 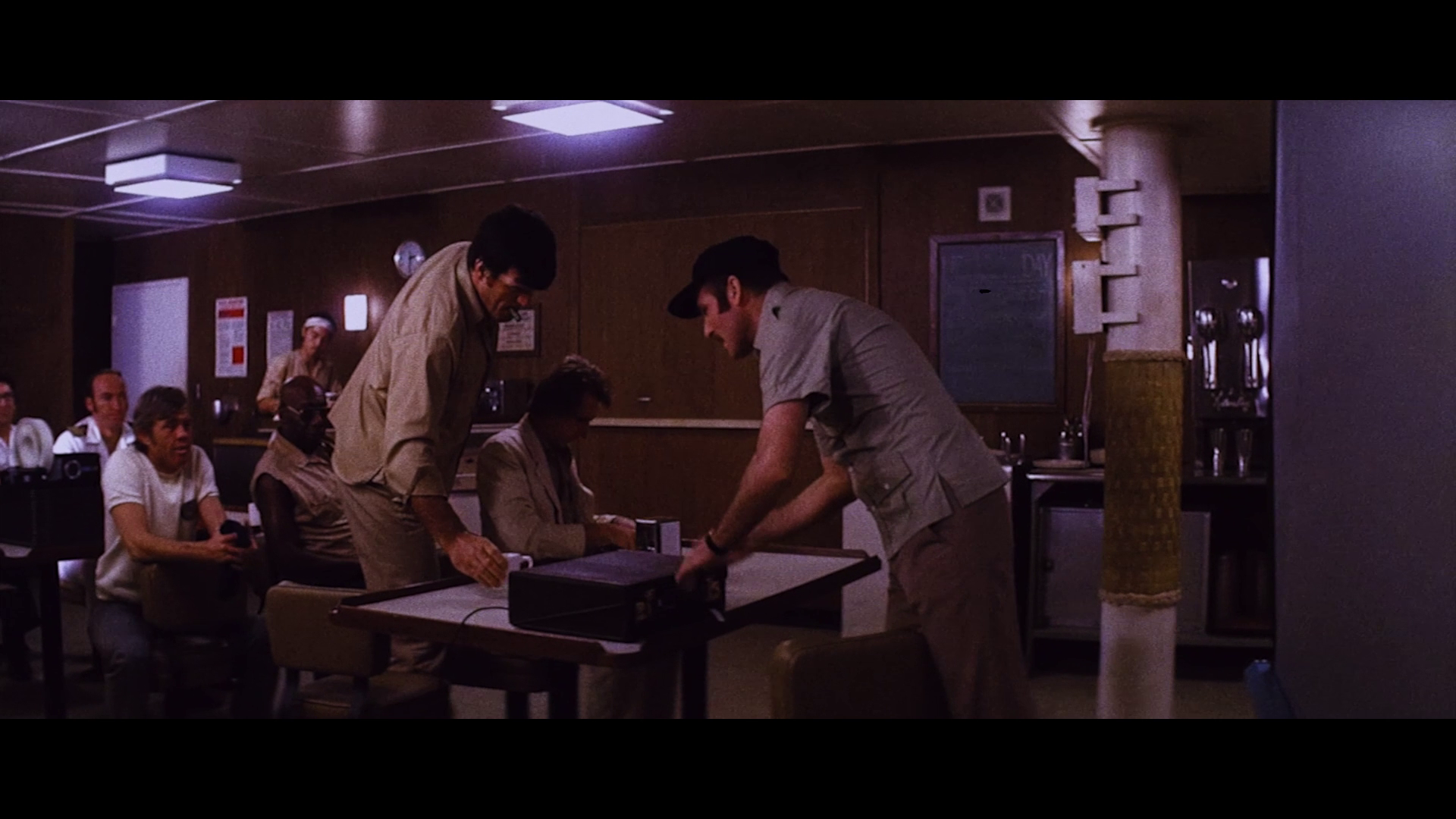 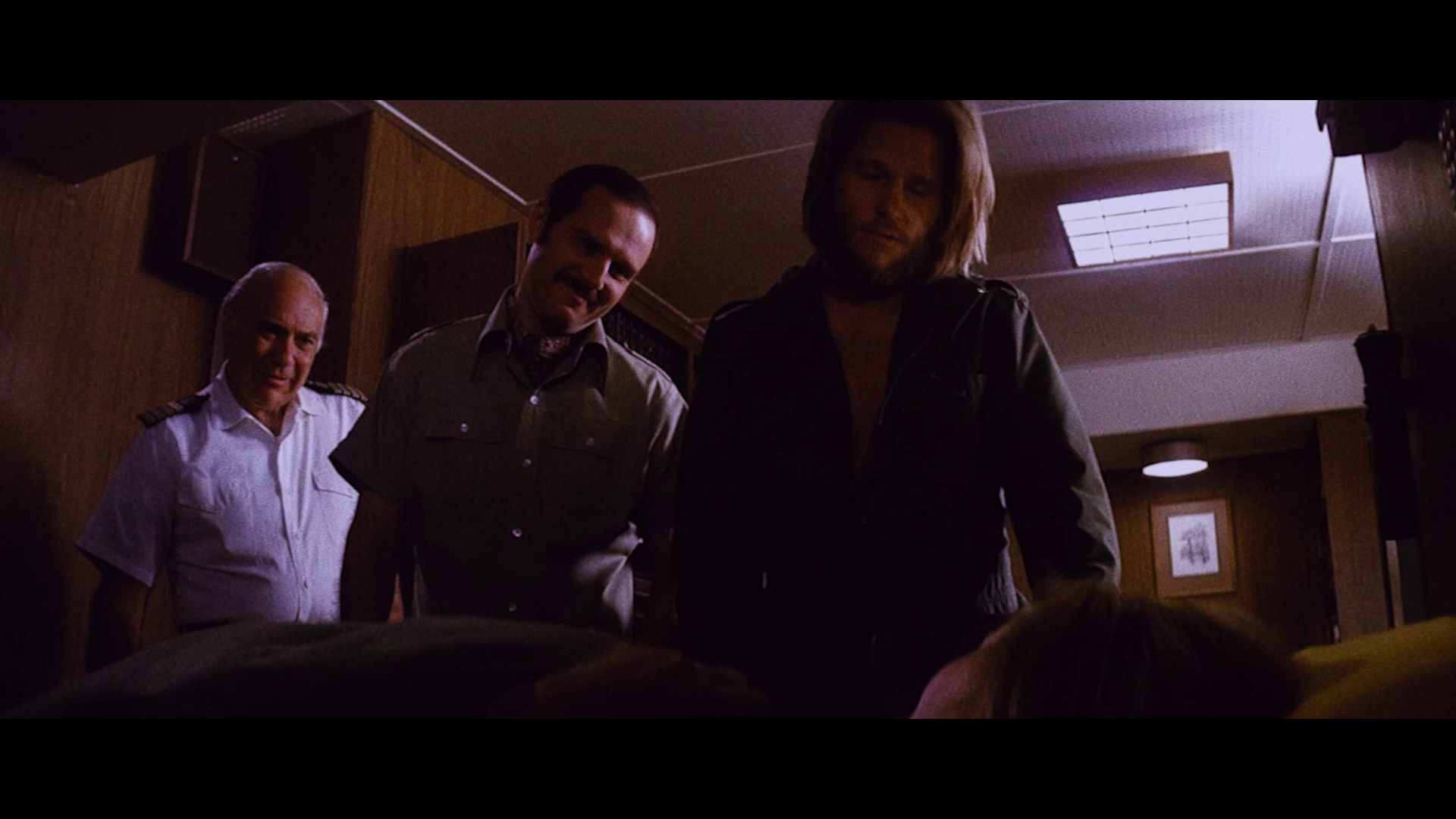 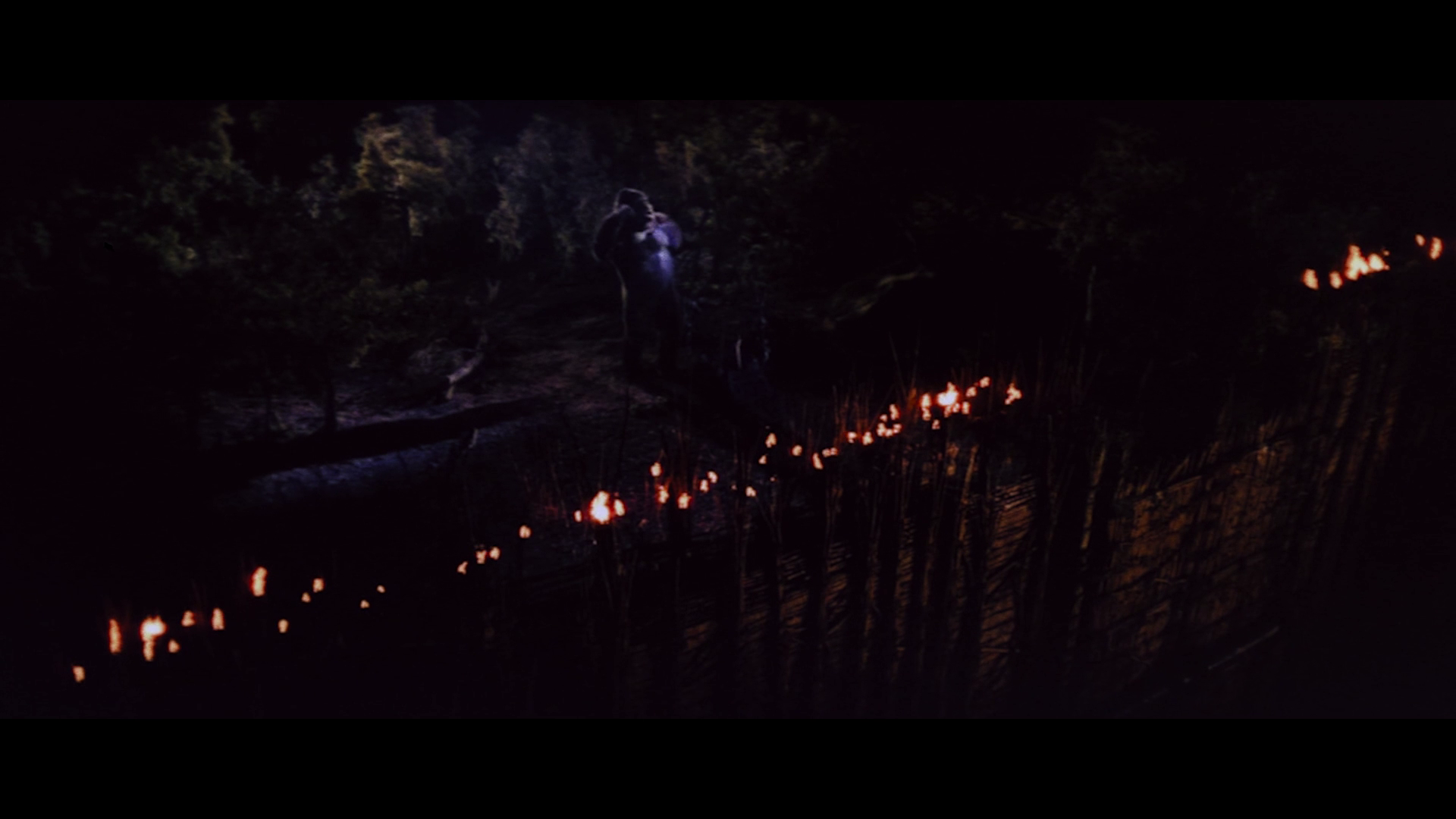 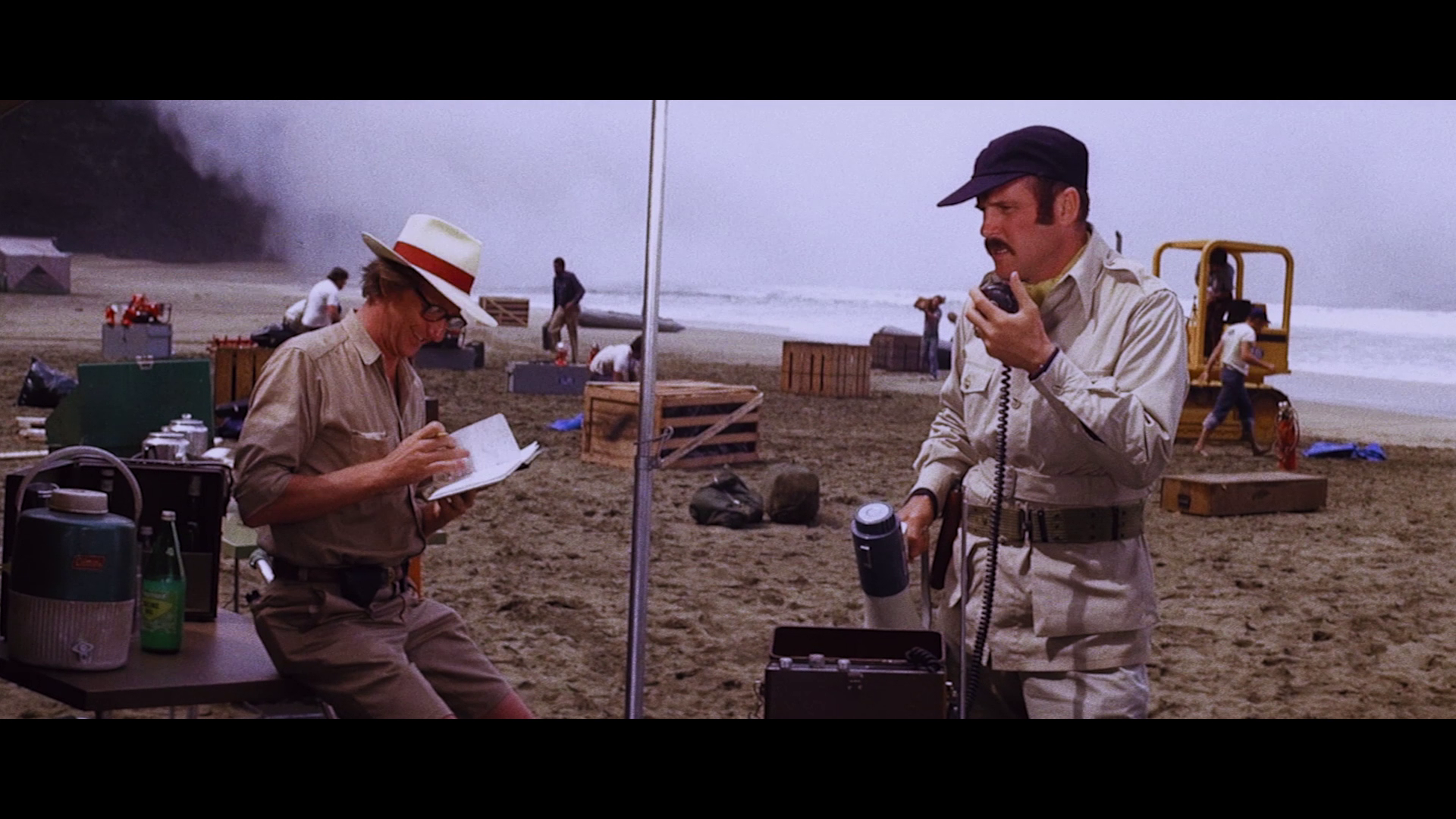 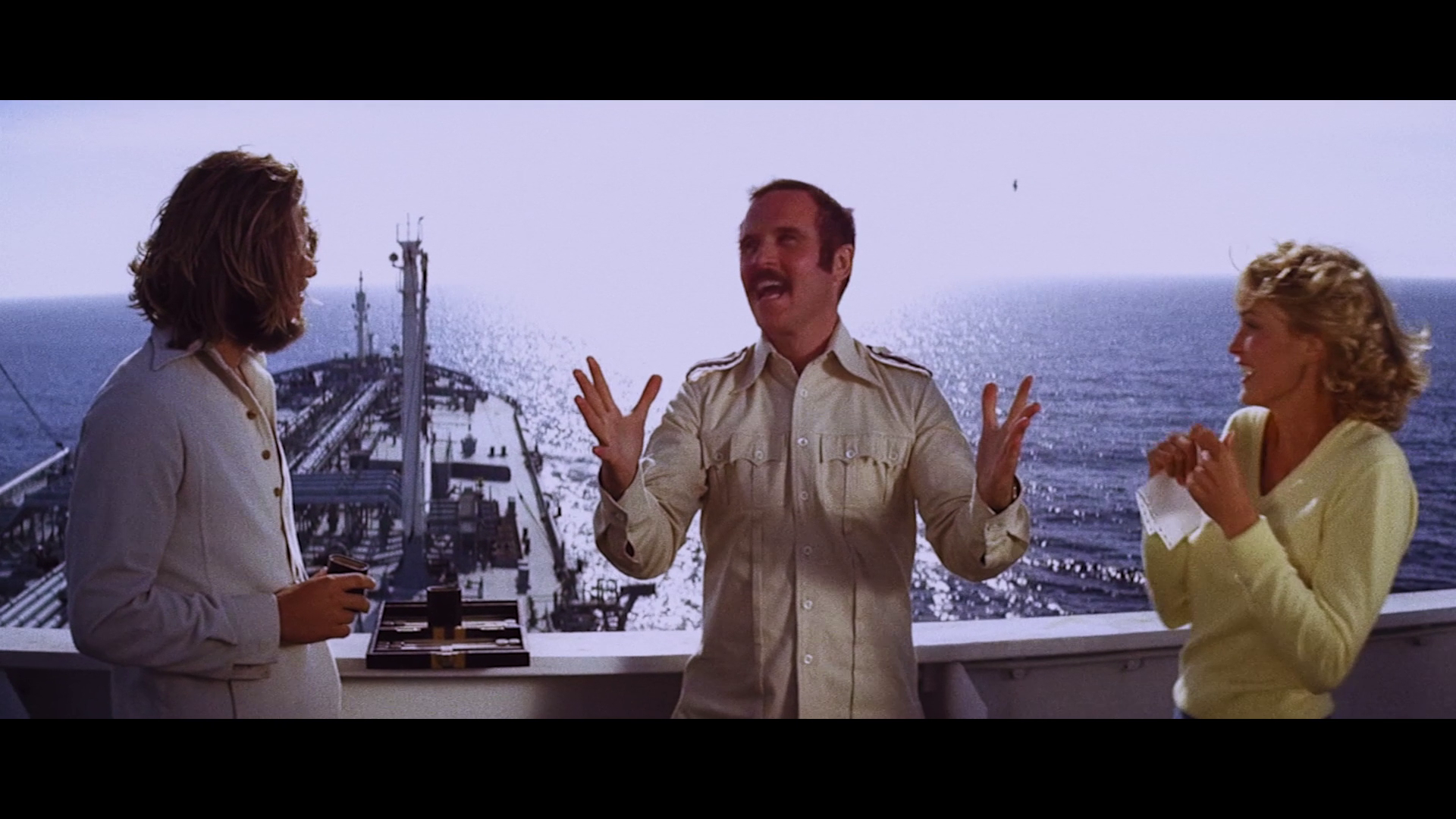 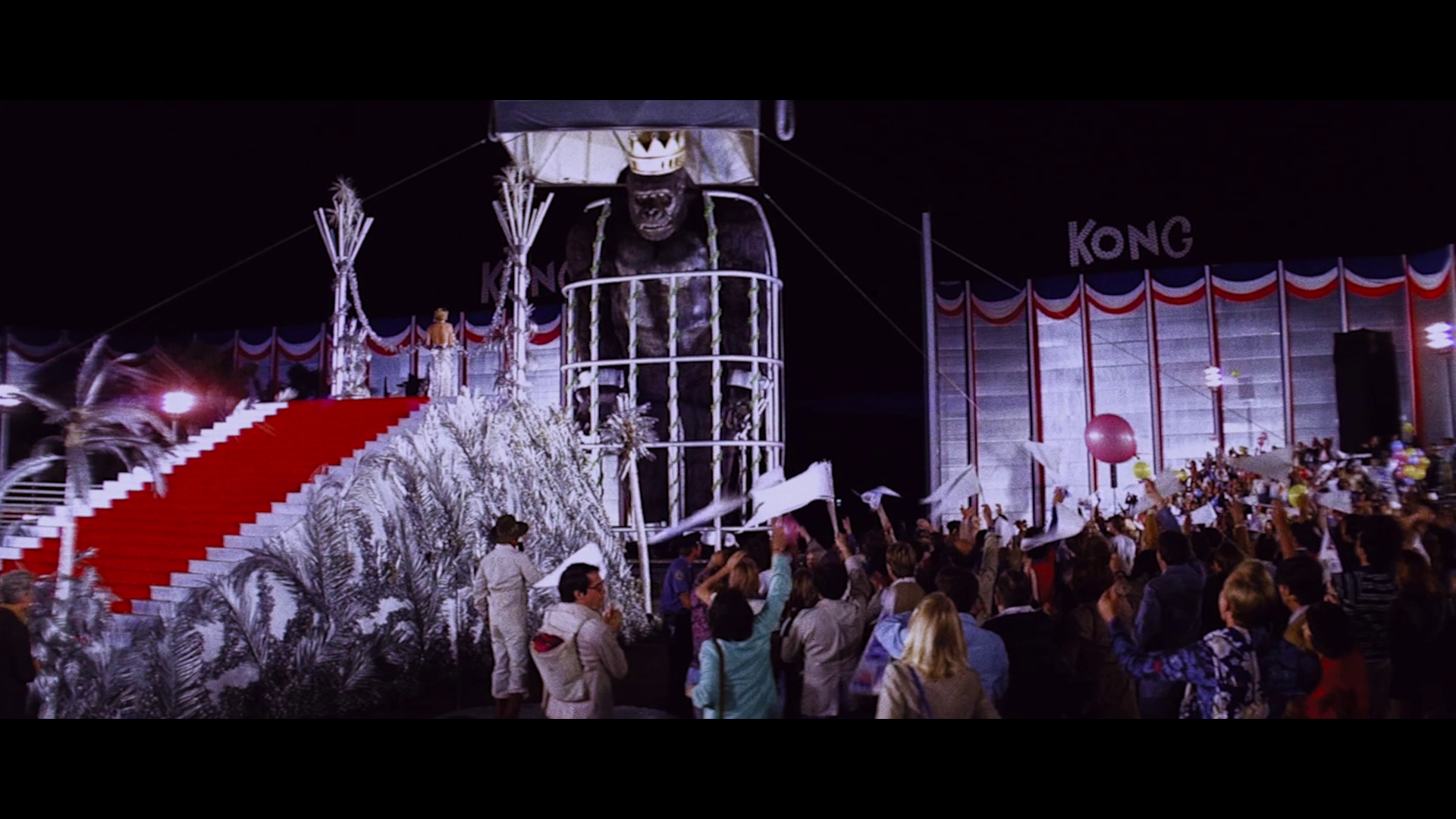 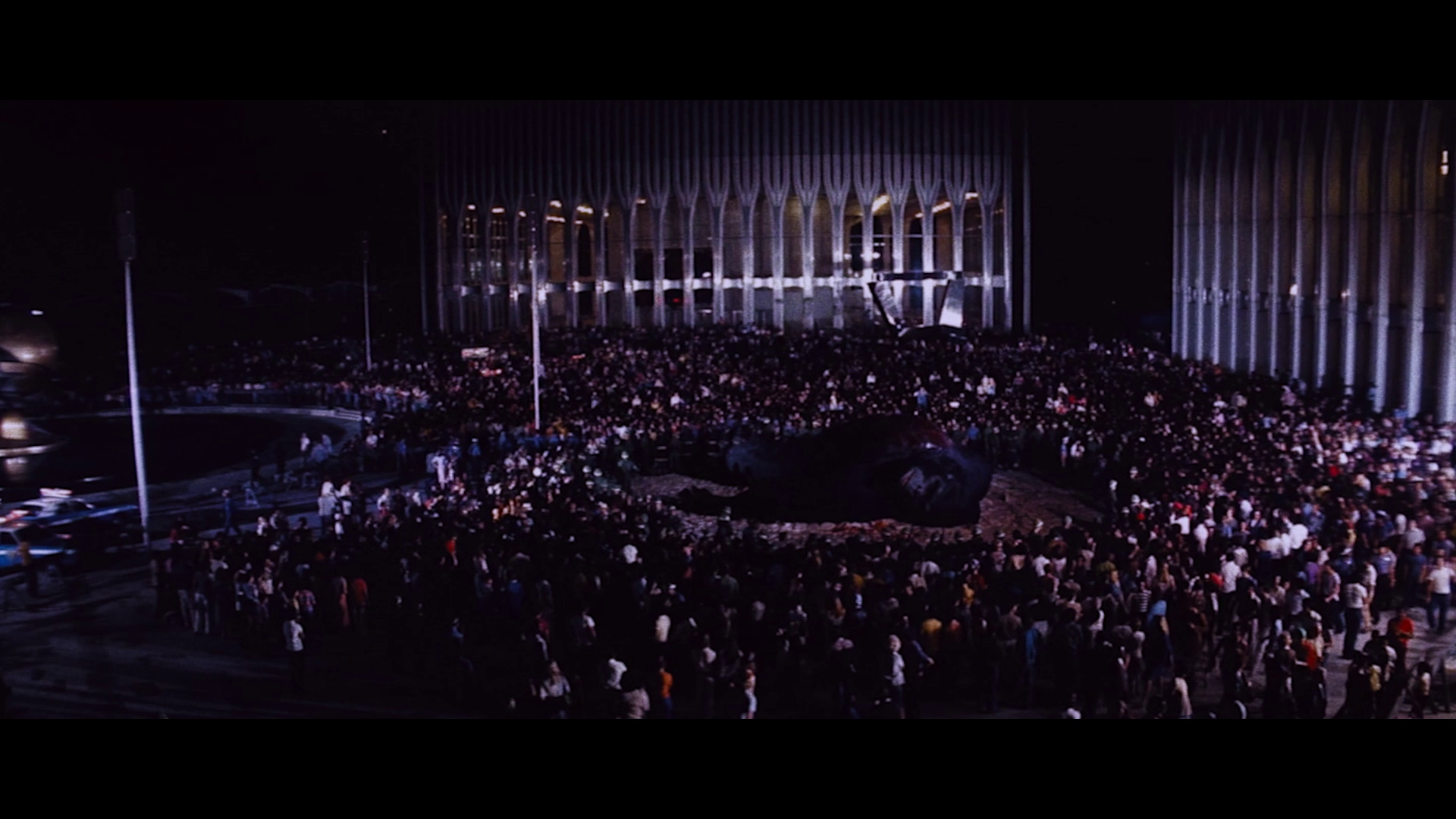 If you want a link to the edit, PM me here or on OT to download the project. Thanks, enjoy!

Interesting. I wonder if this would be a thing that would depend on whether the print was 70mm or not. I know Last Crusade was a 70mm release so the 5.1 sound could be shown (that’s what I’ve read, don’t quote me on that being the reason why). Maybe that would be a release that has the line?

I’m working on a restoration, and the print we have has a mono mix, and it sounds pretty bad to be honest. It also has many missing pieces of audio near reel changes. There is also a LaserDisc rip I have of the same mono mix, but with better audio. We would like to use the LD audio as the better source, but it still needs a bit of massaging before it sounds acceptable. Is anyone able to do this? I can provide the LD rip audio. Thanks!

The only other thing I think he might be talking about is maybe the DTS sound CDs?

I have a LaserDisc release of this film and the removal is present.

Update: I decided to buy a 35mm trailer and scan frame to see what the quality in 4k will look like. The original scan was very red, as the trailer print was on Eastman stock, but this can be corrected, as you can see in the scan. A restoration of the film will yield even better results than this, as the feature film can be scanned wetgate and is a closer generation than this trailer. 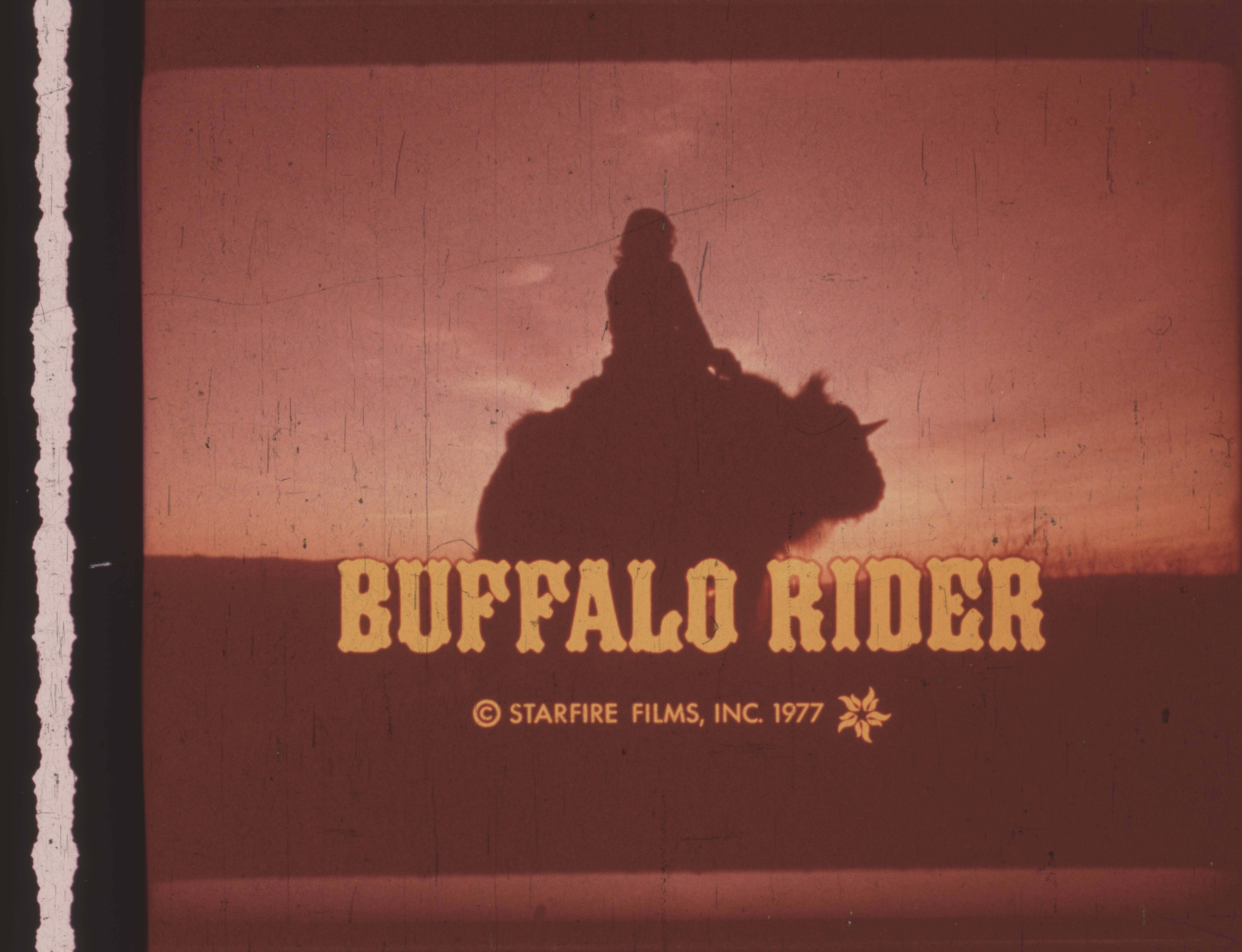 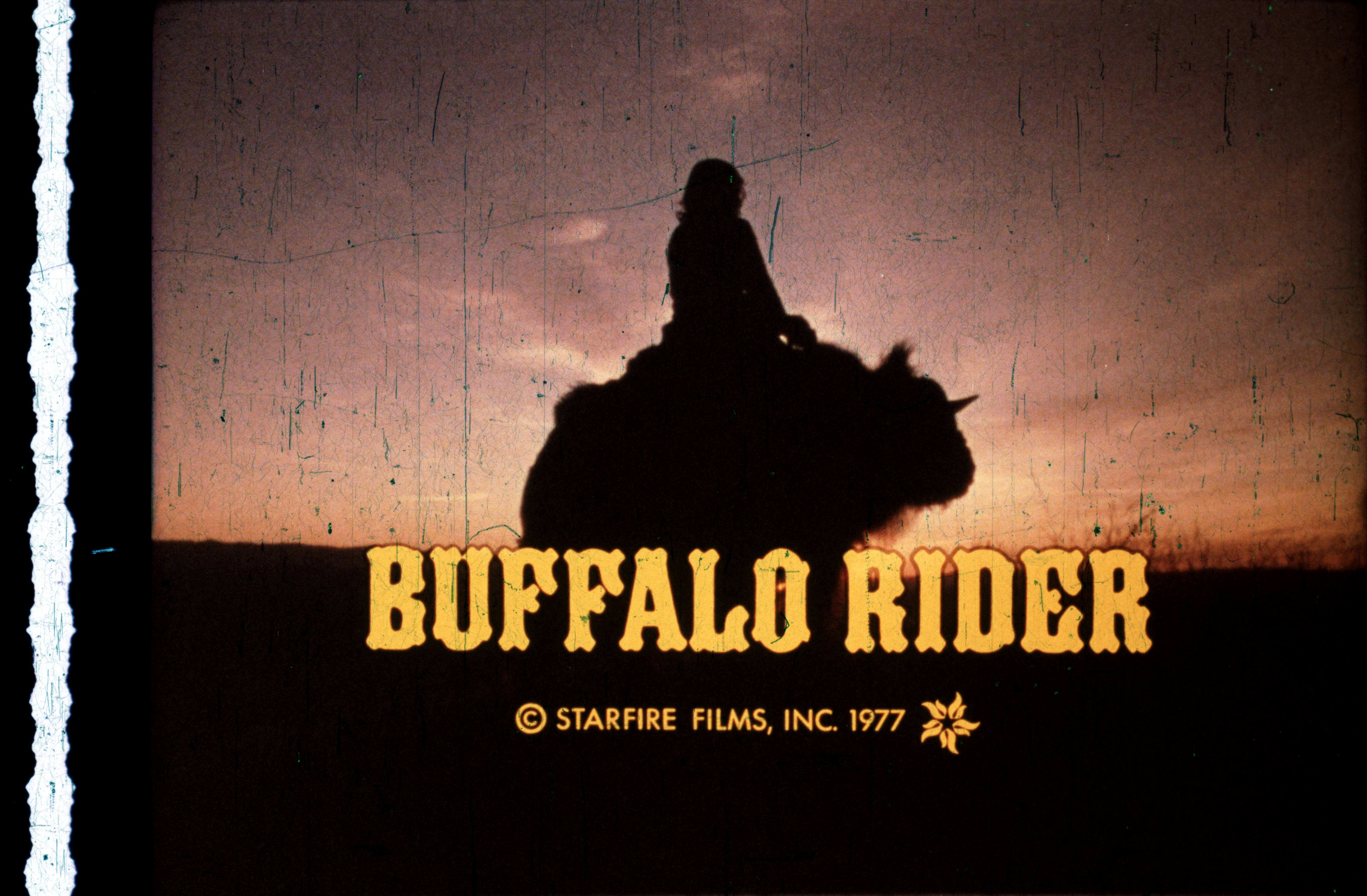 A quick update! We have some more information on the print. For one, the seller was able to find reel four, which helps. Also, it seems to be an Eastmancolor film print, with some fading, but that can easily be corrected digitally. Again, if you want to help out, donate to wtoffutt@gmail.com and leave the note “Buffalo Rider.”

Hi! Probably, you know me as one half of the team doing an upcoming restoration of Godzilla 1985 in 4K from a 35mm print. While that is on the way, we also have found a cult classic. A popular internet meme you might remember from back in the day was a series of songs called “Guy on a Buffalo,” which gained millions of YouTube hits. These were based on a 1977 indie film called “Buffalo Rider.” For the longest time, the only way to watch the inspiration for the meme was VHS or Beta, or bootlegs, taken from VHS tapes. However, we have found on ebay a 35mm print of reels 1-3 of Buffalo Rider on 35mm in great condition, and the seller says they were most likely never even played, increasing the chances of it being in great condition! 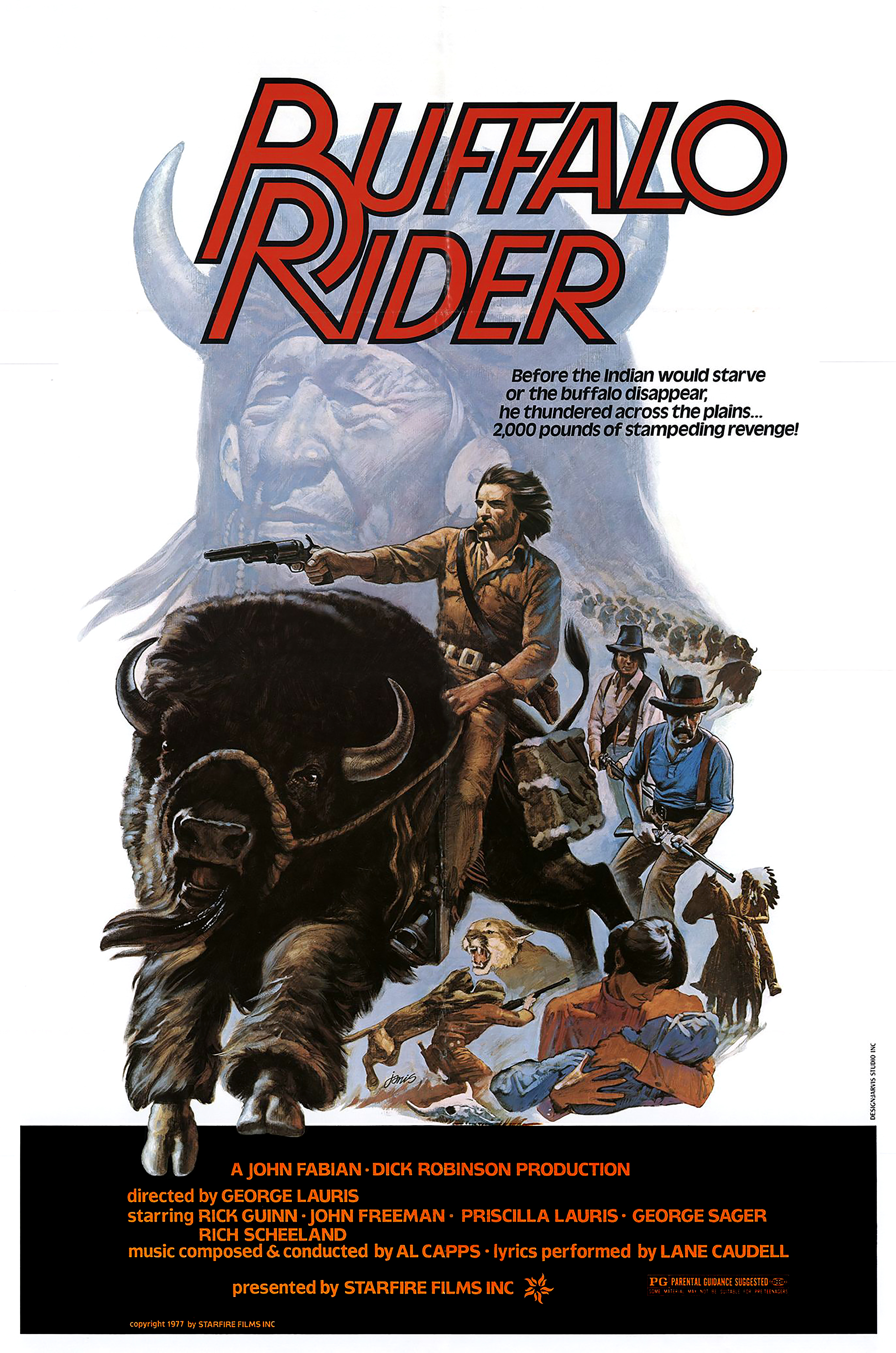 I know a lot of people are familiar with the popular songs, and maybe even the cult classic film. So, me and RedMenace are wanting to see if we can raise some donations to cover the cost of print purchase, and complete a 4K restoration of Buffalo Rider, bringing this cult classic to high definition for the first time ever!

If you wanna see a cult classic brought back in 4K in a full restoration for the first time, please consider donating to wtoffutt@gmail.com on PayPal to help us out and bring the film back. Note, if you donate, please leave a note saying “Buffalo Rider” to make sure RedMenace and I don’t get confused lol. Help us save this film and bring it back to life!

Interesting! I’ve been toying with the idea of doing something like that for King Kong, and maybe Casablanca, two tapes I both have in the colorized version.

The one I have is the Complete Epic, it is 7h3m, yes. I wouldn’t know where to find the Trilogy version.

Do you mean one of the TV edits (Epic, Saga, Novel for Television)? If so, I have a copy of “The Complete Epic,” but if that’s not what you’re looking for, I wouldn’t know where to start except to tell you isolating the extended scenes from GPII seen in one of the TV edits would be a step toward a reconstruction.

This looks amazing! Have you considered trying Dr. Dre’s color match? I’m using it on a fan reconstruction, and it replicates it perfectly.

I believe so, there are different audio effects, mainly from the New World Library. I do think there is a stereo mix, either based off the workprint version or theatrical, not sure. Maybe if the effects were isolated? they could be separated into the channels? I know that was done for Psycho (1960).

Hey guys! Me and RedMenace are working on a Godzilla 1985 project in collaboration, and as a little side bonus, I thought it would be cool to have an option of a 5.1 Upmix of Godzilla 1985. Now, this is only a possibility, as I am not very good with audio. I don’t even know how difficult it is or if it can be done. However, it does seem extremely interesting to see if it could be done, and it would be a cool new option for Godzilla fans to be able to watch the film with. My question is, anyone who knows about audio and audio mixing, can it be done? And if so, how can it be done? Thanks!

What country is it being streamed in? It isn’t streaming in my country.