Although I have no problem with Vader being Luke's father, I can see where the complaints come from.  If you just watch SW alone, everything is simple, and far more mysterious because of that.  There's no sibling connections, and there's far less coincidences.

BTW, that Star Wars NPR Radio presentation sounds interesting.  I'll have to find a way to listen to it.

I don't have a picture of my collection, but I'll post links to the DVD set I have, and the one VHS tape I have of the original Star Wars. 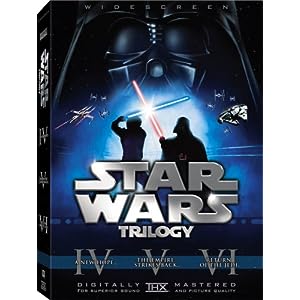 I kept the later because I figured it would be worth a decent amount of money in the future.

I have to admit that I'm a little shocked that Anchorhead seems to only like the original Star Wars, and none of the others, not even Empire.  Not that there's anything wrong with that, but I've never seen someone with that opinion in a Star Wars fan forum before.

I no longer have a working download link to it, but I'm sure there are some members on here who do.

The version currently circulating is the excellent Belbucus restoration, which is synchronized to the 2006 GOUT DVD.

Here's a link to a site that goes into all the differences between the 1977 stereo and mono mixes.

Is this what you normally watch?

I'd be interested in seeing other users favorite movies besides any of the Star Wars movies.

Do you have a link to the Mono mix?

Which version of Star Wars do you normally watch Chainsaw?

Also, do you know of any other changes done in the 1981 version outside of the title crawl?

Also, I don't know anything about the sound in Empire, because the 06 DVD is the only version of that film I've watched more than once.   I've never even seen the 1993 laser disc version in which it's copied from, though I do have a VHS tape of it from the 1980s that I found at a goodwill, but never watched.

I think Zombie speculated that they spliced that new scroll onto an already existing 1977 print.

I  would hazard a guess that the "senator" print was done only for the UK re-release -which I saw in 1981(SW was shown back to back with ESB in the early summer of that  year-my personal introduction to SW!)

For the 81' and 82' releases in the states they probably created new IN's and then spiced that scroll in.

Having said that-there is that fan who said  that the print he saw in 82' was already pink and faded-so maybe that was a print from 77' with the new 81' scroll spliced in!

I'm curious as to why they would splice the "A New Hope" crawl onto the print, if it really was the 1977 print.  I still think it was the 1981 print, but perhaps Zombie is correct.

The 70mm six-track came first, then the 35mm stereo, and the 35mm mono was the last mix created.

And there are more dialogue additions to the 2004 mix that were never in any version before - "We've stopped!" and "There's no one here!" are the two examples I can think of.  Plus the dialed-down music, and flipped surrounds, and horrible dialogue levels...

"Blast it Wedge" I guess was also added to the mono mix?

I guess the 06 DVD of Star Wars is closer to it's original form than I thought...

The sound mix on the 2006 DVD is the 1993 remix from the Definitive Collection laserdisc release. It is based on the 70mm 6-track mix, although there are several additions.

Thanks for sharing that link.  From the looks of it, all the differences are pretty minor, and it seems to me that the 06 DVD of Star Wars is pretty faithful to the original print that premiered in 1977.  That said, if there was a way to watch the original print of Star Wars exactly as it was shown in it's premier, I'd be the first in line to watch it.

BTW, does anyone have the recording of the original print from the premier of The Empire Strikes Back?

I have the same 1982 VHS tape, and I always thought it was from a print that came out in 1981 since it says "Episodes IV: A New Hope" on it.  BTW, the Senator theater in Baltimore screened an original 35mm Technicolor print of Star Wars, though it was the 1981 version, not the 1977 version.

I see.  The mono mix came after the 70mm soundtrack I think.  I guess the 06 DVD of Star Wars is closer to it's original form than I thought since the it doesn't contain the "close the blast door" line, Luke's alternate "blast it wedge" line, or CP30's tractor beam explanation.  None of which I heard in the recording.

I did notice that there was no line that stated "Close the blast doors".  Was that later added in for another sound mix?

I listened to the soundtrack, and I think it's awesome hearing the film back when it came out in 1977.  I noticed no differences in dialogue, voices, etc, which indicates to me that the 06 DVD of Star Wars maybe exactly how the film was shown back in 1977.  Perhaps there was maybe some sound changes or two, but that's extremely minor.

Here's something interesting I read on another forum:

I saw STAR WARS back when it first came out in May of '77 at the Chinese Theater in Hollywood on the SECOND day after premiere. Waited three hours and had no idea what to expect but we were blown away. I learned after that only a few selected cities (like Los Angeles) got the 70mm six-channel magnetic stripe version and that most cities got the 35mm optical stereo soundtrack.

At any rate, we went back to the Chinese about 5 more times in 1977 (last time at Christmas) to see the movie and then (for old times sake) I saw it in 1997 at the Chinese for the anniversary reissue. Well, that was a disappointment. Soft picture, extra junk added to the effects, the soundtrack squashed and pulverized just like all the movies of the 1990s. A waste of time.

Last night a famous collector pulled out his 1977 70mm mag print of STAR WARS and projected it for a few selected guests. I mean, a guy rich enough to be able to project 70 in his screening room? C'mon, how eccentric is that?

At any rate, even though the print had "turned" a bit, the picture AND SOUND were just like I remembered from 1977; sharp, clean and the sound was dynamic as all heck. Watching it like this, the movie held up remarkably well. In fact, we were on the edge of our seats for the "swiped from '30 Seconds Over Tokyo" style battle at the end. It was great.

Why can't they take this print, transfer it to high rez and just release it on a DVD? It looks (and sounds) so much better than any other laserdisc or DVD I've ever seen of STAR WARS. There had to have been at least 70 db of dynamic range on the mag soundtrack of this thing. Compare that to the 10 db of dynamics of the reissue sound mix. Urggh. And what happened to the picture quality of the reissue? You'd think the orignal camera neg had been destroyed and the soft, flabby, diffused image that they came up with in the reissue was the best they could do. I know that's not true so what was the reasoning? If you could have seen what I saw last night, crystal clear picture, sharp focus and everything. NOTHING like what you see when you watch the movie now. Somewhere down the line someone made a decision to degrade the picture, why I don't know. Did they bounce the entire movie to digital and back to film again? For what reason? Oh well. End of rant.

I never considered Empire superior to Star Wars.  I did like it when it was first released and even had a laserdisc of it a few years after that.  After a while, the things that I had never liked about it (Vader as father, Yoda, 3PO silliness) ended up becoming the things that caused me to lose interest.  To me, it felt small and stylized compared to Star Wars.  It was too slick, too formula.  I very much prefer the vast unknown, far away adventure of Star Wars.

I agree with you.  Also, the script and acting are noticeably better in SW (esp. Guinness and Cushing).  ESB has lots of cool stuff in it for saga fans, but as a movie, SW can stand up against any film ever made.

The script I could perhaps see a case for (though I'm an Empire supporter myself), but I always thought the main actors all improved in ESB, especially Hamil and Fisher.

Interesting discussion thus far.  One thing I never mentioned in the OP is age.  I believe if you saw Star Wars at the theaters in 1977, and it blew you away, it will always be your favorite.  I'm not saying this is the case with everyone, but I have uncles and cousins who saw the film during it's theatrical run, and were completely blown away, and as far as they are concerned no Star Wars sequel or prequel can ever top that experience.  On the other hand, if you didn't see Star Wars in 1977, and don't have that nostalgic attachment to it, perhaps you judge the films on which one gave you the most enjoyment.  I'm not saying this is the case for everyone, but I've noticed that most people  between the ages of 18-25, who have no nostalgic  attachment to the 1977 film at all, generally prefer Empire.  Also, that particular age bracket is the one that votes the most on IMDb, which can  perhaps somewhat explain Empire's higher ranking.

I looked at more lists, and found that around 2004-2005 is when ESB surpassed Star Wars on the list, and today ESB is the only Star Wars movie on the top ten.  Now I'm sure there were plenty of people in the 1980s and 1990s who considered ESB the best of the trilogy, but it seems like in the 1980s and 1990s Star Wars was considered the masterpiece of the trilogy, with Empire ranked behind it.  Now, in 2010, Empire is widely considered the crowning achievement of the saga.  Has anyone else noticed how opinions on these two films seem to have changed over the years?  I'm curious as to why they've change the way they did.

My guess is it's someone reading the crawl aloud to their child in the theater (my parents did this for my brother in 1997 when we saw the SE in theaters - they did it for the alien subtitles, as well).

I haven't listened to this recording, so that's only a guess.

The voice sounds almost robotic.  Either that was in the opening crawl in the 1977 version, the guy added it himself, or it was possibly someone reading it out loud to their kid like you said.  Hopefully he can clarify when he gets a chance.

Just curious as to why a deep voice is reciting the lines in the opening crawl.  Was that added by you?