Now, it is an out-of-control monstrosity…

How about killing in ROTJ while he is still frozen in carbonite?

Leia (disguised as Boushh) approaches ‘Carbo-Han’, but just before she is able to initiate the thawing process … someone shots Han right from behind in the heart. Leia turns around … and there is Boba Fett. Of course Leia whould have to kill Boba Fett during the Sarlacc battle.

Actually i like that the series has ‘lower production qualities / cinematography’ so far. Why? Take Rogue One as an example. They made the final battle on and over Scarif so ePIC and EmOTiOnAl … and then you 're supposed to watch the original STAR WARS. Actual movie goers are way too spoiled by the ‘grand-and-epic’ Marvel age of movies. They aren’t invested in the actual character drama anymore. The Obi-Wan series goes for a lower epicness and more character drama. And that’s why it is good so far. I know, don’t judge a season until you have seen it.

IMO the scene between Obi-Wan, Leia and the Stormtroopers on the ‘pick-up truck’ was way more interesting and suspenseful than the reunion between Obi & Ani.

And Hayden still looks too small in the Vader suit.

But so far i’m really enjoying this series.

The giant fish in the middle of the desert makes 0 sense to me. If this is a supposed remnant of ancient Tatooine’s oceans it’s absurd that it would remain intact as a skeleton , let alone fresh meat!

I would assume it is somekind of a flying creature that actually lives in space. Maybe it died near Tatooine’s orbit and its corpse crashed in the desert?

Digression: In Star Trek that kind of thing - creatures living in space - is not uncommon. 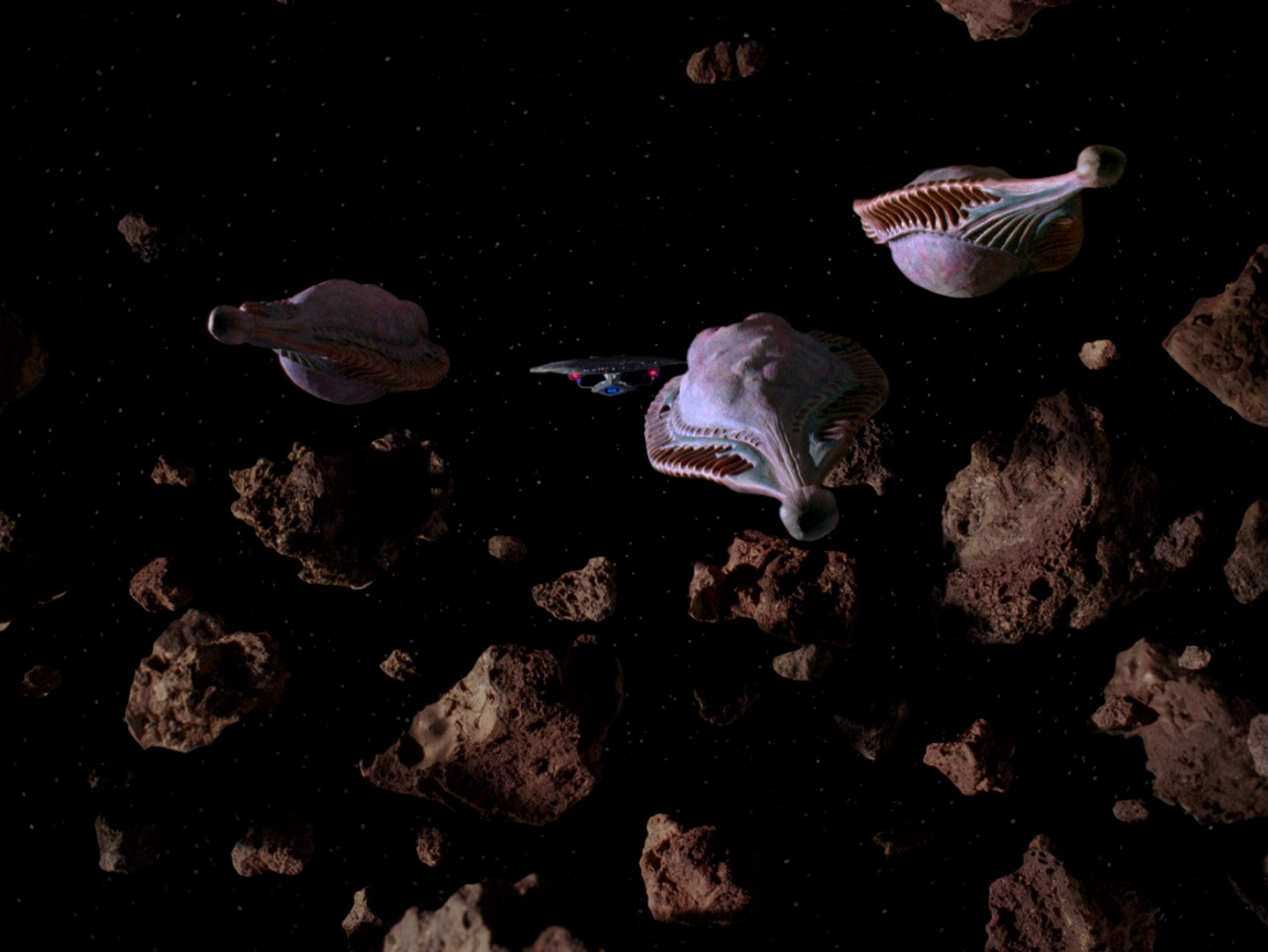 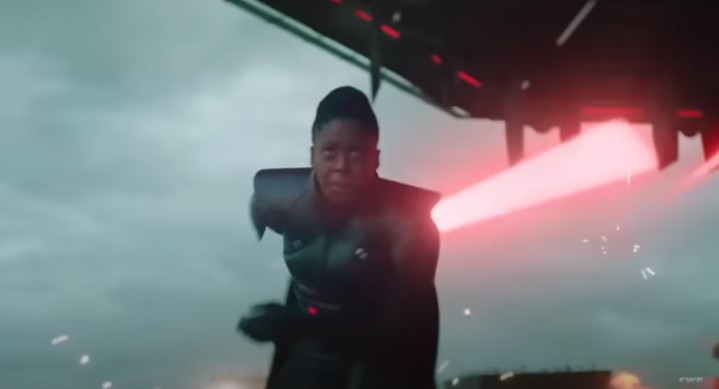 Is it just the still or does her lightsaber ‘pays tribute’ to the 2004 DVD Release … dull pink lightsaber core.

In terms of the anticipated Rematch between Ben & Vader, i think it won’t be a physical fight, but more so a telepathic force vision lightsaber fight. Why? A battle fought within their minds opens up the visual opportunity to let them fight within multiple arenas: Tatooine, Mustafar, Naboo Generator room, etc. - all visually interconnected. Going this route, it would retain their actual reunion on the first death star.

I’m looking for Dark_Jedi’s Star Wars Trilogy Theatrical Editions V1 or V3 versions. Are they anywhere available besides MySpleen? Unfortunately i don’t have an account for that. I hope i’m not confusing this, but this is Project Blu, right? The grand inquisitor looks so fat. I hope we’ll have another tv show to see him getting on a diet to look exactly the way he does in Rebels…

The dark side of the force is a pathway to many delicacies some consider to be unhealthy.

The one and only scene i’m interested to see is, when Obi-Wan and Uncle Owen get into a dispuation about the young Luke.

I have come to the point where I am more interested and fascinated by the train wreck nature of this franchise and by the toxic battles within its own fandom then the actual material.

That mindset haunts me too in terms of the Prequels. I can’t enjoy Episode I - III as movies anymore. I guess i watched the Making Ofs & Web-Docs (The Beginning, From Puppets to Pixels, etc.) more often than the movies itself. And when i watch them occasionally, i just watch them with audio commentary. I wanted to enjoy those movies so many times, but it always comes down to: trying to understand George Lucas’ awkward decision making and neverending ‘it-always-meant-to-be’ justifications. It is a puzzle i can’t solve. The OT is not tainted for me, but the PT is.

I think a lot of goodwill towards ROTS comes from the fans which grew up with the Clone Wars animated series. I never saw a single episode of that series, but as far as i heard, Anakins characterization is a lot more likeable than the prequels. So maybe for a Clone Wars fan, Anakins downfall in ROTS is much more engaging and heartbreaking, thus the drama is actually working for them. 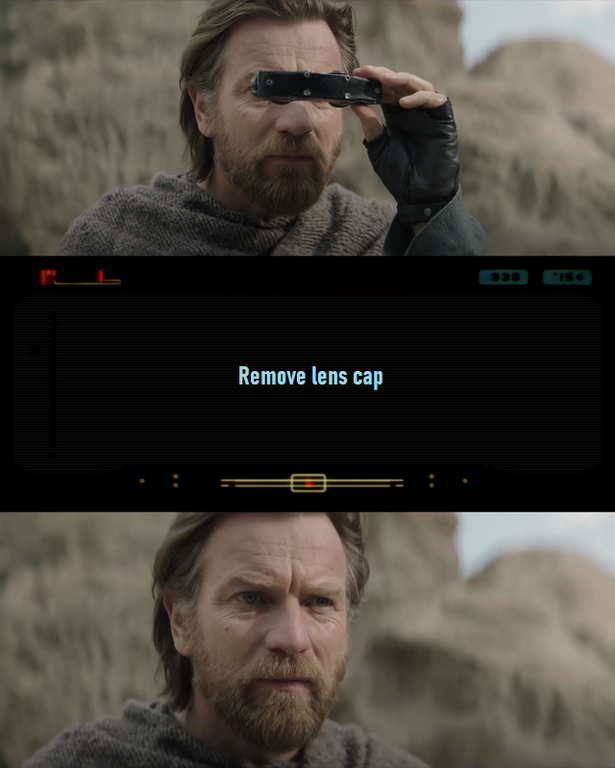 (BTW, I have no idea who made this image, I just googled Obi-Wan teaser + binoculars and this showed up.) 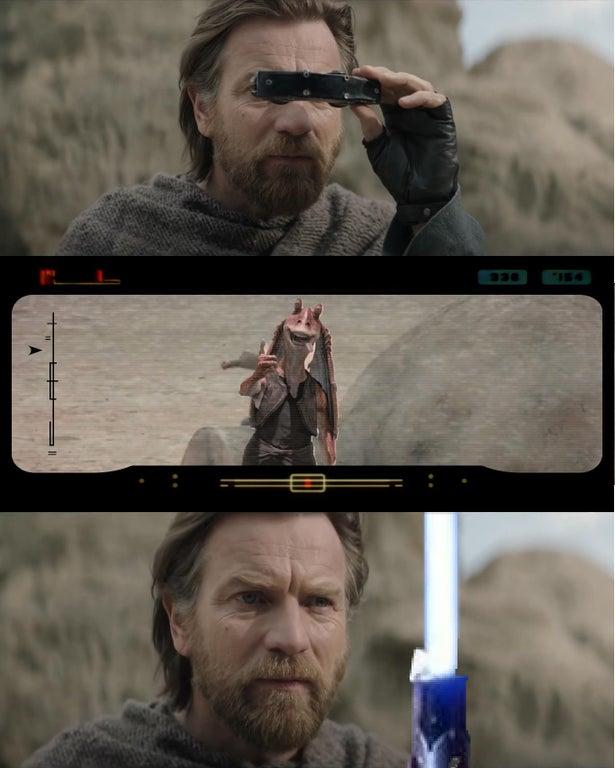 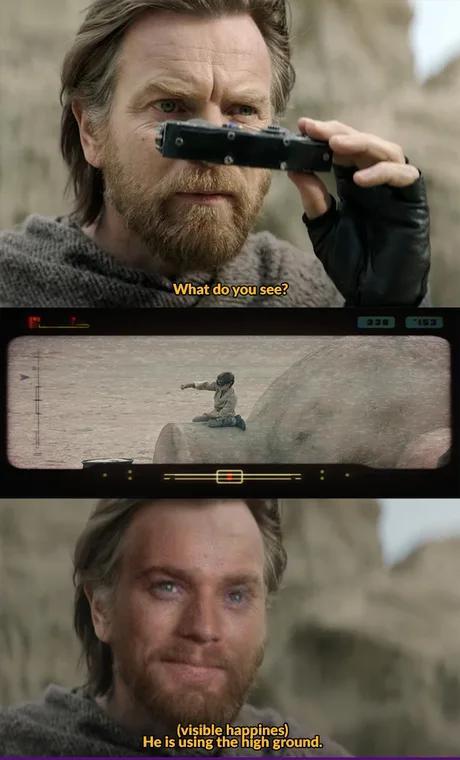 It is already a meme

Are we taking bets on whether we’ll see that awful helicopter nonsense with the spinning (that’s a good trick!) saber?

Since the GOUT features my favorite OT color grade, i’m really looking forward to this project 😃

The Pre-Prequel Anakin Skywalker i (still) have in my mind after all these years is a noble & likeable man with extraordinary pilot skills. And he has enthusiastic ideals about peace, right and order.

He gets recruited by Obi-Wan Kenobi und becomes a Jedi Knight. Both fight in the Clone Wars. Due to the republic’s imminent downfall and his idealistic ideals Anakin is pressured to gain faster and more effective ways of the force to end the war. Eventually - with the help of Palpatine - Anakins uses dark side powers to end the Clone War. Due to the the seducing powers of the dark side Anakins once noble ideals about peace and order become more and more corrupted.

Anakin Skywalker is CONVINCED that the dark side of the force is the only way to keep peace and order in the galaxy:

“If you only knew the power of the Dark Side.”

“With our combined strength, we can end this destructive conflict and bring order to the galaxy.”

What about the Empire Of Dreams documentary? It says “edited for content” in the beginning. Anybody notice what they cut out?

I remember one shot where Harrison, Mark and Carrie are walking around the Death Star hangar set. Harrisons arms rest on Marks & Carries shoulders and all three walk toward the camera. And Harrison holds (i think in his right hand) a cigarette. It is clearly visible in the 2004 version.

That cigarette was censored at least one time, specifically for a public clip, which was shown at the Star Wars Celebration 2017 in Orlando.

Donald Trump tells the story of Darth Plagueis the Wise 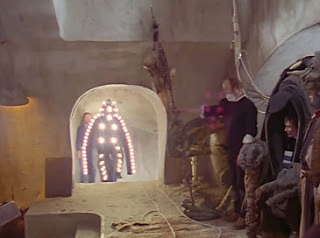 I can’t help myself, but these long arms and the light bulbs attached all over the body are kinda creepy and uncomforting.

There is some, if you know video games, Silent Hill-ish or The Evil Within japanese body horror type going on in it’s (on set) visual aesthtics.

The Prequel Trilogy should have had a different Star wars (Main) theme during the opening crawl and the end credits.

Still to this day, everytime i hear the ‘OT’ Star Wars theme in one of the prequel movies, i’m thinking: since these movies deal with a different era and it’s visual aesthetics differ so much from the OT visuals, the main musical themes should also be different.

The ongoing piling of RETroactiv CONtinuity by the Special Editions, PT, ST and any Star Wars TV series, did more damage to the OUT than George Lucas’ refusal to release the Theatrical Cuts.

“Briefly for the tree burning scene, but luke’s relationship was with Vader not really Anakin, which seemed like it would complicate things more than that moment allowed. Yoda felt like the more impactful teacher for that moment.”