While I know you’re joking, your opinion that it’s objective is influenced by your own personal feelings, so…

Don’t even bother with Frinks he is a thin skinned idiot who attacks anybody with a different opinion. But as soon as somebody makes a light hearted joke about badly made star wars figures or autism(look at some of his older comments from the ‘‘random image’’ board) he loses his shit. Just let the snarky Jew enjoy his echo chamber in peace.

Of course they aren’t terrible. They’re just terrible compared to the originals.

Pretty much my opinion. I’ve seen a lot of movies. They aren’t great by any means, but they aren’t that bad either compared to some out there. They are fun to watch, but when you dig below the surface, their failings are easy to see. And what have many Star Wars fans spent decades doing? digging. So we are more painfully aware of the flaws than most people. The casual viewer is not going to see all the flaws we do. All three of the PT were huge blockbusters - record setters in ticket sales. They were hugely popular movies. Bigger in some ways than the OT. They just don’t have the staying power because they are flawed and those who love the OT have various views on the level of bad those flaws drop these films to. They are Lucas at his worst, which I think is better than many other directors at their best.

This is why the term ‘‘fanboy’’ applies more accurately to people who are still complaining about the PT then people who still like them.

Would not mind a live action Clone Wars movie although giving the dislike people have for the PT it probably not gonna happen.

I’d love to see something set in the PT era that’s actually good. Not sure about the Clone Wars specifically because the clones were never terribly compelling for me, but I’d definitely be in for something in that timeframe with practical sets and a good script. I’ve recently been thinking myself about Star Trek while trying to figure out my relationship with the PT and other elements of Star Wars that aren’t my favorite. I only came to Trek in my late teens, so this might have more to do with the fact that I was never as invested in it as I was in Star Wars, but the stakes for any given Trek thing being good always seemed lower because there was always an understanding that there would eventually be more Trek. In the years between the PT and the Disney acquisition, when Lucas regularly insisted that there wouldn’t ever be any more Star Wars movies, I was really pissed off because it looked like they’d taken a thing that I loved, made it terrible, and blown it up, never to be brought back or continued. Now that we’re going to be getting new films indefinitely, though, pretty much all my negative feelings about the prequels have dissipated. Without that finality that ROTS once carried, they just seem to me like three subpar entries in an ongoing series that’s bound to have ups and downs, much like the Trek films and shows that I don’t care for.

That has always be the biggest problem with Star Wars fanboyism. The fans don´t judge the movies on there own merit but keep comparing them to the originals.

Not that the PT would be that much better received by the general public were they not connected to the original Star Wars but it is a problem within the fandom.

Would not mind a live action Clone Wars movie although giving the dislike people have for the PT it probably not gonna happen.

Another Ewok movie would not hurt. But much like a live action clone wars movie it is probably not gonna happen.

Galen didn’t construct the DS, only the laser.

Then how did he construct a convenient way for the rebels to destroy it???

Maybe he was in charge of construction?

Well, you might have a point. I mean Orson Krennic had to be replaced by somebody.

Motti was never hinted at being the creator of the Death Star.
He was just a Death Ray Fanboy.

Then what does Vader mean then when he says ‘‘Don’t be to proud of this technological terror that you have constructed’’ to Motti?

Even if you believe that George Lucas had the entire story planned out from the beginning their is no real continuity between these films.

I mean as of now the death star has had three creators first it was Motti then it was the Geonosians, and now Jyn Ersos father.

I don’t know if they’re better…I just know I enjoy TFA more than ROTJ and if I have to pick one I’d rather watch TFA. And that’s how I rank them.

So how does it feel to finally have have an unpopular opinion?

Don’t worry tho internet reviewer Chris Stuckman agrees with you. When I was 7 and I got A new hope for Christmas.

ROTJ has the best score if only for the track ‘‘The final duel’’ I am so happy by the way that it has only been used ones in an official Star wars film because it was only meant for that very moment. It probably had allot to do with the fact that the first picture I ever drew after seeing that film was that of Luke vs Vader in the throne room.

I’m not sure what you’re referring to when you say TFA reuses dialogue from the OT.

referring to the millennium Falcon as ‘‘that hunk of junk’’ for exempel.

Tarkin: “You may fire when ready.” CHECK
Darth Vader choking an Imperial Officer together with a sarcastic verdict. CHECK

But Darth Vader does not utter any lines from the previous films in that scene as far as I can tell.

So nice to see the elitism cireclejerk shutting out any discussion as usual.

I honestly don’t think that it has anything to with their immense lack of quality. Sure twilight is nothing but emotional and literal porn for women but the truth is that their are thousands of romance novels like that and it just so happens that Twilight has enough fans behind it that it got made into a film series. Add to the fact that it takes a really crazy spin on the beloved vampire mythology and the hatred is easily explained. Like wise the live action Transformers films are just like any other of Micheal Bays movie but it has the label Transformers on it so all the 80’s manchildren go crazy when they are released and to be honest I think something similar happened to the SW prequels(not counting rouge one).

Their are allot of bad movies such as food fight and Garbage pail kids but they don’t have a hate following so expressing your appreciation for them would probably be more exaptable especially within these circles.

This might change over time tho. I mean ones upon a time Schumachers Batman film had a massive hate following but now a days people seem to look back on them with quite the fondness or at least more acceptence then before, although in fairness it might have something to do with how extremely far Warner Brothers went in the other direction with it’s DC movies and honestly only time will tell if peoples general perception of the PT will ever change.

Honestly I don’t recall Rouge one having allot of fanservice. Force awakens on the other hand. Well, let us see
dialogues lifted straight from the OT. Check
Things from the old films being shown for a second or so for no other reason then to remind us that the movie takes place in the same universe as the OT and to get the ‘‘hey I remember that’’ reaction from the audience.Check

Rouge one has none of these problems as far as I remember.

TV’s Frink said:
JEDIT: Leaving aside the PT, it looks like the rest of your rankings were put in a blender.

Seriously, tho Frinks what is even the point of discussing these films if people are not allowed to have any other opinion then

I really enjoyed Rogue One but the film is far from being without faults, and I honestly have no doubt that had the film come out in the early 2000s it would be lumped in with those “crap prequel films.” A lot of the complaints levelled at the prequels are glaringly apparent in R1, so why is it excused?

Actually RLM dislikes Rouge one. Not as much as the prequels but he still disliked it. Personally I find it a really impressive movie given how paper thin the premise is.

Is this really a good idea??? From what I understand these kind of conversation is what started the whole trolling fiasco.

By the way he recently posted pictures of dead babies in one of the ‘‘random GIF and picture’’ forum.

Every time I look through PT concept art, I see the excellent PT which could’ve been if Lucas didn’t have the creative vision of a mole.

Disagree their was nothing wrong with the final versions that we got of the two or at least not visually.

Also, interesting how these horror concept art of villains are coming up right after some 4chantroll posted pictures of dead babies.

I think it is time somebody lightens the mood and I be the first. 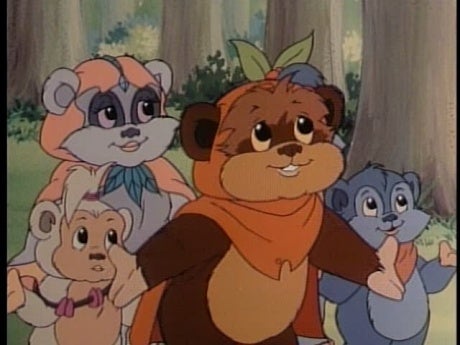 I honestly have nothing against the PT but it sad how much unnessicery drama they create.

The phantom menace game is my favorite one. No kidding it is a perfect blend of action and puzzles. Also am I the only one who misses the days were you could save your game pretty much were ever you wanted? Video games do that less and less nowadays.

Mine: I am a Jedie like my father before me.

There are like 8 people on that forum and the last post was 2 months ago. Safe spaces are for the weak. The river devil eats those who are weak.