Haven’t been around 10-year-olds lately, have you?

Actually, I have. But if they wanted more realistic chases, they should have hired a different little girl to play Leia (because this little girl apparently doesn’t know how to run; it looks like she’s actually toddling around (my seven-year-old daughter runs faster than her)). They should at least have given her some sort of head start (or have her further away from her pursuers to start with), because what we got was her toddling away, her pursuers quickly closing the gap–quick cut, now she’s 30 feet away; her pursuers quickly close the gap again–quick cut, now she’s 30 feet away again (it’s like the chase scene in Hot Fuzz, only it’s not supposed to be a joke).

After watching the first two episodes, my overall opinion is it seems decent enough but my main gripes are:

But, like I said, I’m enjoying it enough to continue watching (Ewan McGregor does a fine job as Obi-Wan, as usual), but hopefully they can tighten up a few things going forward.

Q: What do you think of the Sequel Trilogy?

When Obi-Wan first meets him in Episode I, Anakin should be a young adult in his twenties or so (and “already a great pilot”). Obi-Wan should be “amazed how strongly the Force was with him,” taking “it upon [himself] to train him as a Jedi.” They eventually would go off to fight in the clone wars (along the way, Anakin getting involved with Luke’s mother and coming under the spell of Palpatine) and by the end of Episode II, Anakin is “seduced by the Dark Side of the Force … and [becomes] Darth Vader.” And then Episode III is all Darth Vader running around hunting down and purging Jedi.

One of the biggest problems of the prequel trilogy is that George Lucas decided to waste an entire movie with Anakin being a small child. Not only is there no plausible way for such a young boy to meaningfully contribute to the story (without resorting to silliness), but it also uses up a full third of the trilogy to do so and sets the wrong tone for the rest of the films.

Of course, by this time in history, Lucas himself has already turned to the Dark Side (fully committing to the Special Editions and forsaking the original releases, overly obsessing over CGI, and most damning, insulating himself from any outside writing/directorial help or input and surrounding himself with those only capable of muttering “Yes, Mr. Lucas”). So, even if we had avoided a child Anakin, there is little hope that the prequels would have turned out significantly better. But maybe, just maybe, we could have got…something more.

The first season of The Mandalorian was decent, not great (and certainly not as outstanding as some have proclaimed). I mean, there doesn’t seem to be a whole lot of depth or stakes (with a lot of the weekly entries being very episodic and self-contained). There were some nice moments, sure (and the show’s rating gets a bit of a boost from being, you know, Star Wars), but overall I’d probably give it a “B” (because there have been many really, really good series in recent years on AMC, Netflix, etc. that I feel were quite a bit better). So, even though it has Star Wars on its side, I’ll just continue to watch and hope it improves next season.

I haven’t bought any Star Wars DVDs since purchasing the GOUT tin in 2006 (except for the Rogue One Blu-Ray 3D/Blu-Ray/DVD/Digital HD combo set I bought from Target in 2017). If this new boxed set doesn’t include the original films, then I have absolutely no interest in it. Hell, I haven’t even watched any of the Special Editions since I first saw them when they were released in theaters in the 1990s (except for a few horrible tidbits here and there on the internet). So, until the unaltered original trilogy is released (or they make another good Star Wars movie like Rogue One), then I’ll just save my money for other things.

And as for George Lucas…All the criticism he’s received is just a natural consequence of his willful suppression of the original films. If it wasn’t for his insecurity and pettiness, he wouldn’t feel the need to try to diminish the originals in order to prop up his Special Editions (“Oh look, aren’t these new and shiny Star Wars movies so much better than those old, grainy originals?”).

Honestly, as I was watching this first episode, I kept thinking, “This really isn’t very good.” So, hopefully it improves over the next few episodes. It had a couple of decent moments, but I feel those were outnumbered by other scenes that were, let’s just say…lacking.

I think the best part was the introduction of IG-11 (even though they started milking the whole self-destruct joke way too often). Unfortunately, most scenes were merely mediocre, and the episode doesn’t start well with the rather clichéd and poorly done bar fight. Which is then followed by the frankly stupid monster-under-the-ice scene (it’s as if J.J. Abrams was writing this). Also, the numerous references/callbacks to things from the OT started to be a bit ridiculous (Kowakian monkey-lizards on a spit, the gatekeeper droid, handy-dandy carbon-freezing slabs, etc.).

But, since it’s Star Wars, I’ll keep watching and hoping it gets better.

Well, George Lucas is the one who charted this course for Lucasfilm. He is the sole reason for Lucasfilm’s current stance. So him not being there anymore doesn’t change the fact that he is the one who caused this mess. If he wasn’t so petty and insecure, he would have given the originals a proper release long ago. I can forgive him for making subpar prequels (people make bad movies all of the time…It’s unfortunate, but no big deal). I can even forgive him for the special editions (they’re just bad director’s cuts). When I saw them in theaters, I thought some of the changes (and especially some of the horrible added scenes) were bad, but who cares because they were obviously just adding every little bit of cut footage and the other bits just to have new Star Wars content in movies that everybody had already seen. But then George hears a bit of criticism about the changes and instead of just letting it go, he up and decides to double down on the changes and proclaim them gospel and the originals just unfinished rubbish to be not just discarded but actively suppressed. 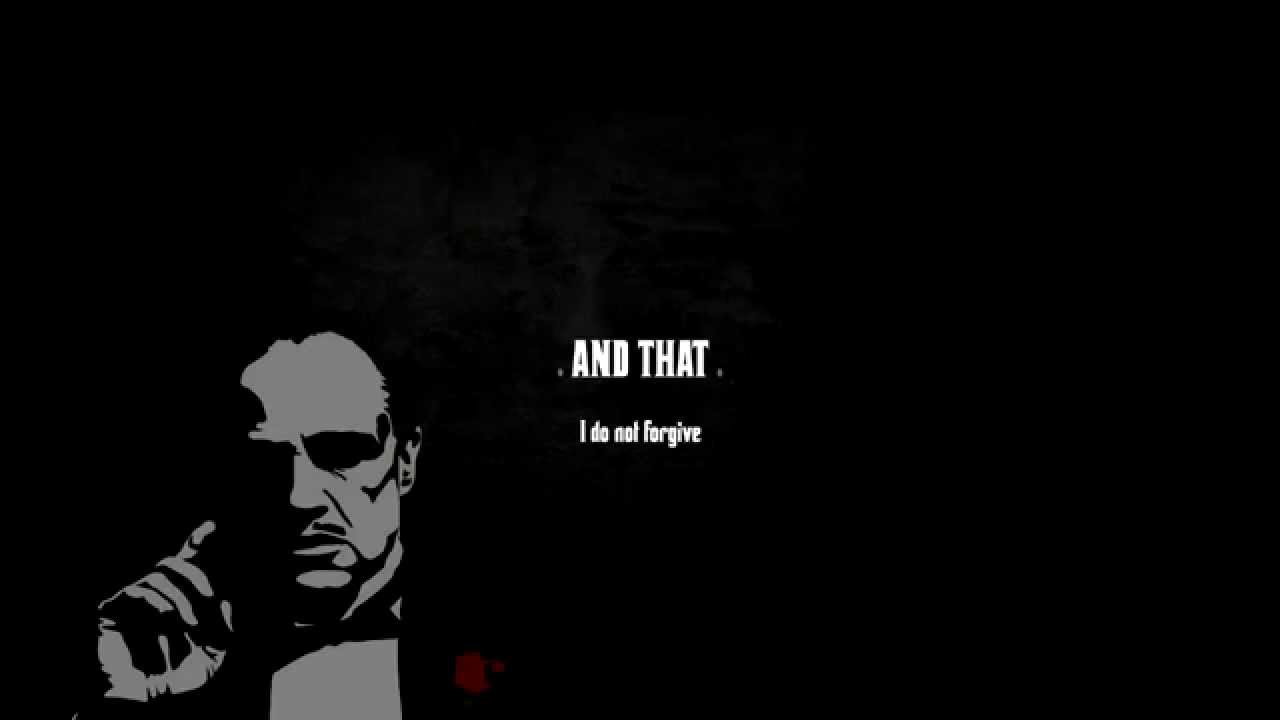 We don’t know the bigger picture on this though. I doubt George was even texted on this one.

And I seriously doubt Criterion would touch the SE unless they could include the original version as well. If any company respects film fans, it’s them.

Oh, I know George wasn’t involved in this latest decision (he is out of the picture fortunately), but it is his legacy that lead to it.

Just when we thought they’ve turned around: 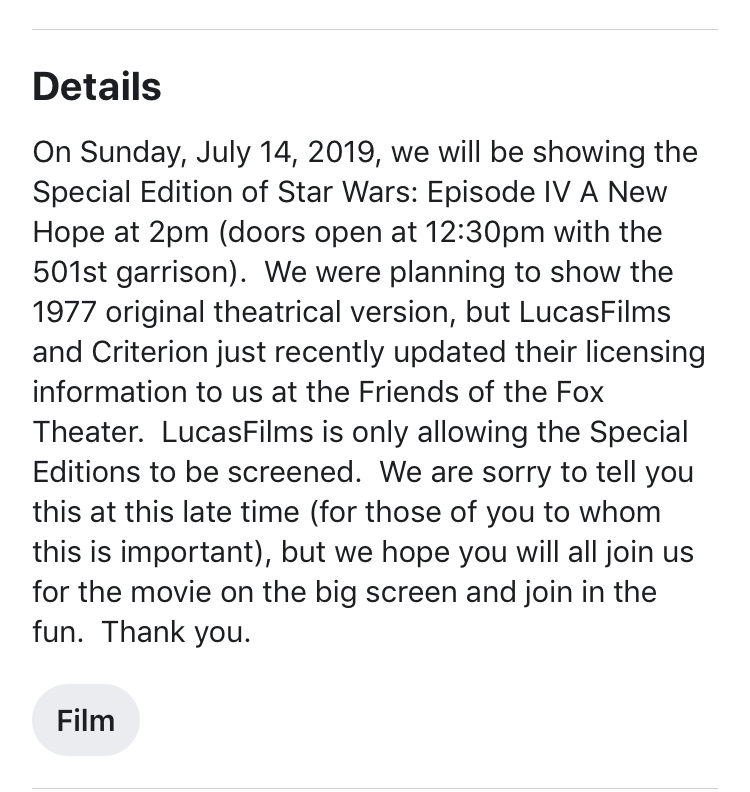 I bought this Original Trilogy VHS collection in the early 90s: 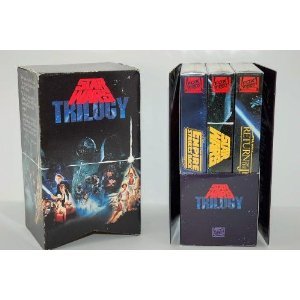 I bought each of the prequels when they came out on DVD. 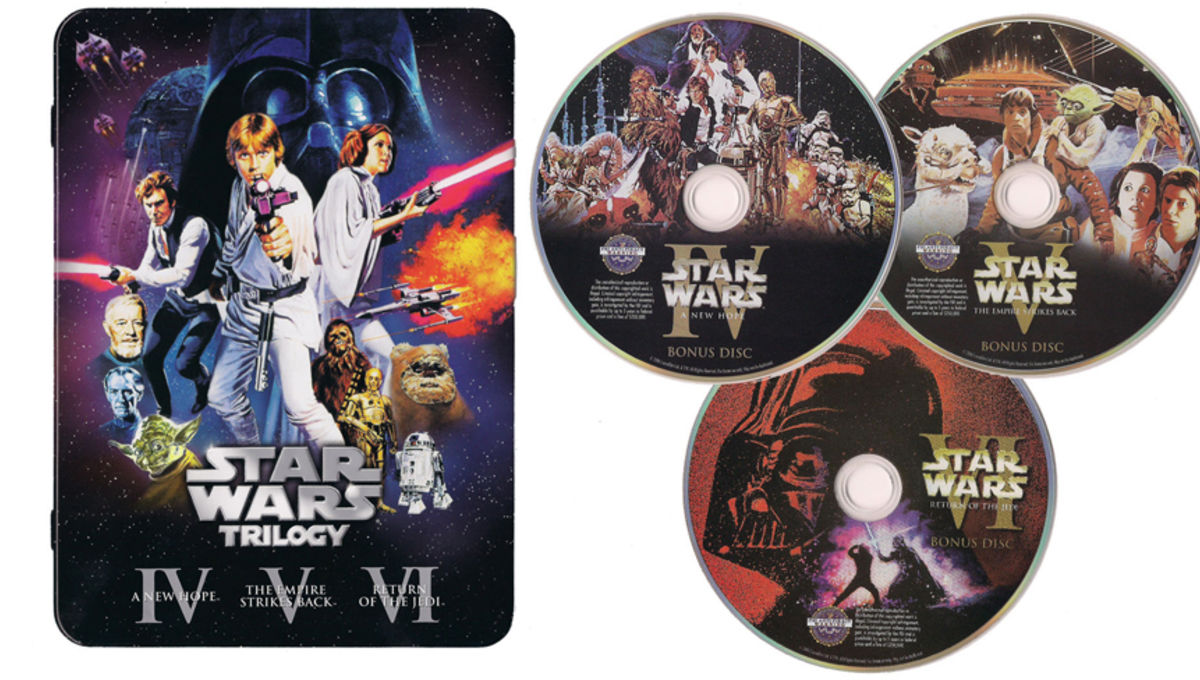 Well, the Sail Barge I ordered came in.

It’s…kinda nice (so here are some photos and a video: https://www.youtube.com/watch?v=lcD9fb9hyqM). 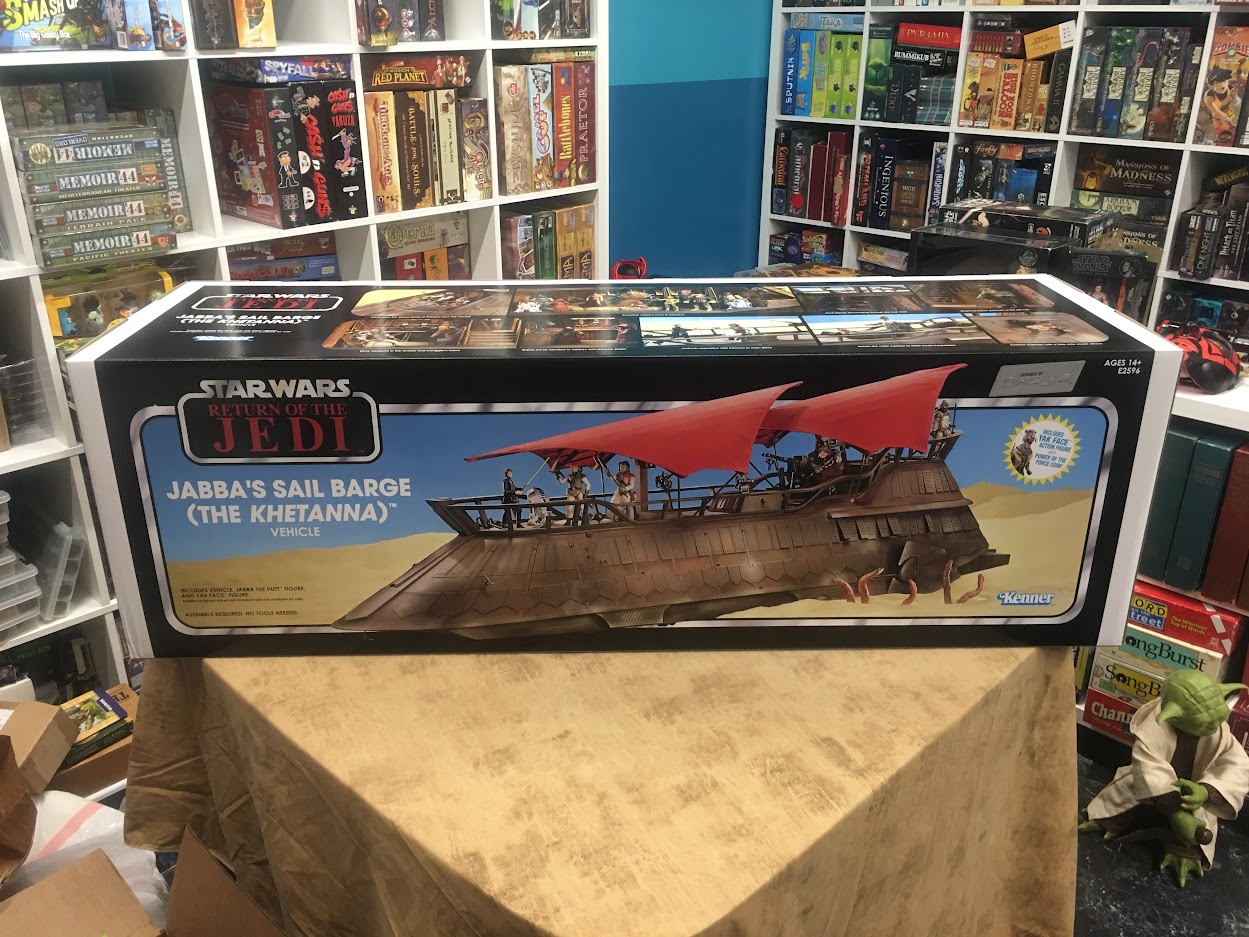 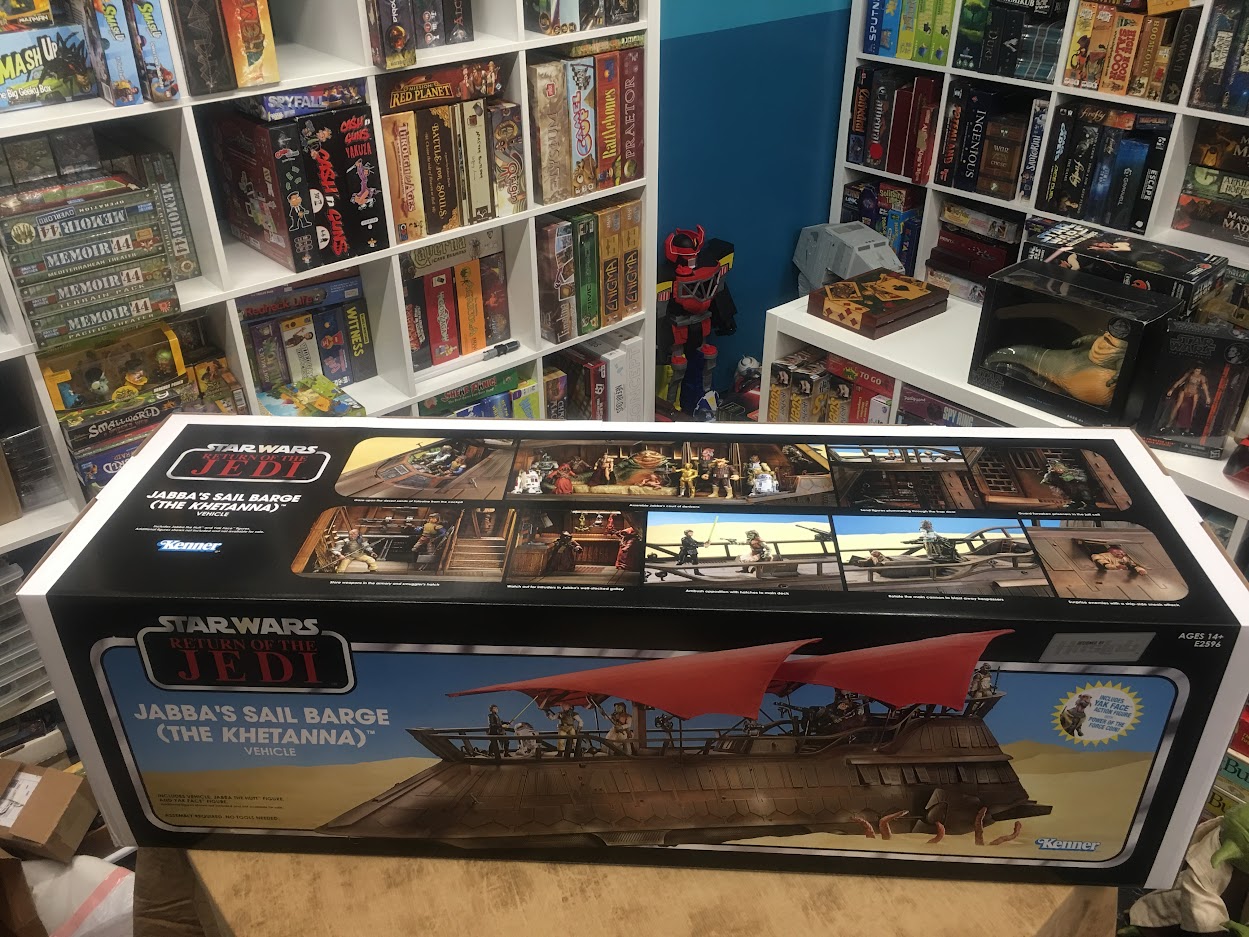 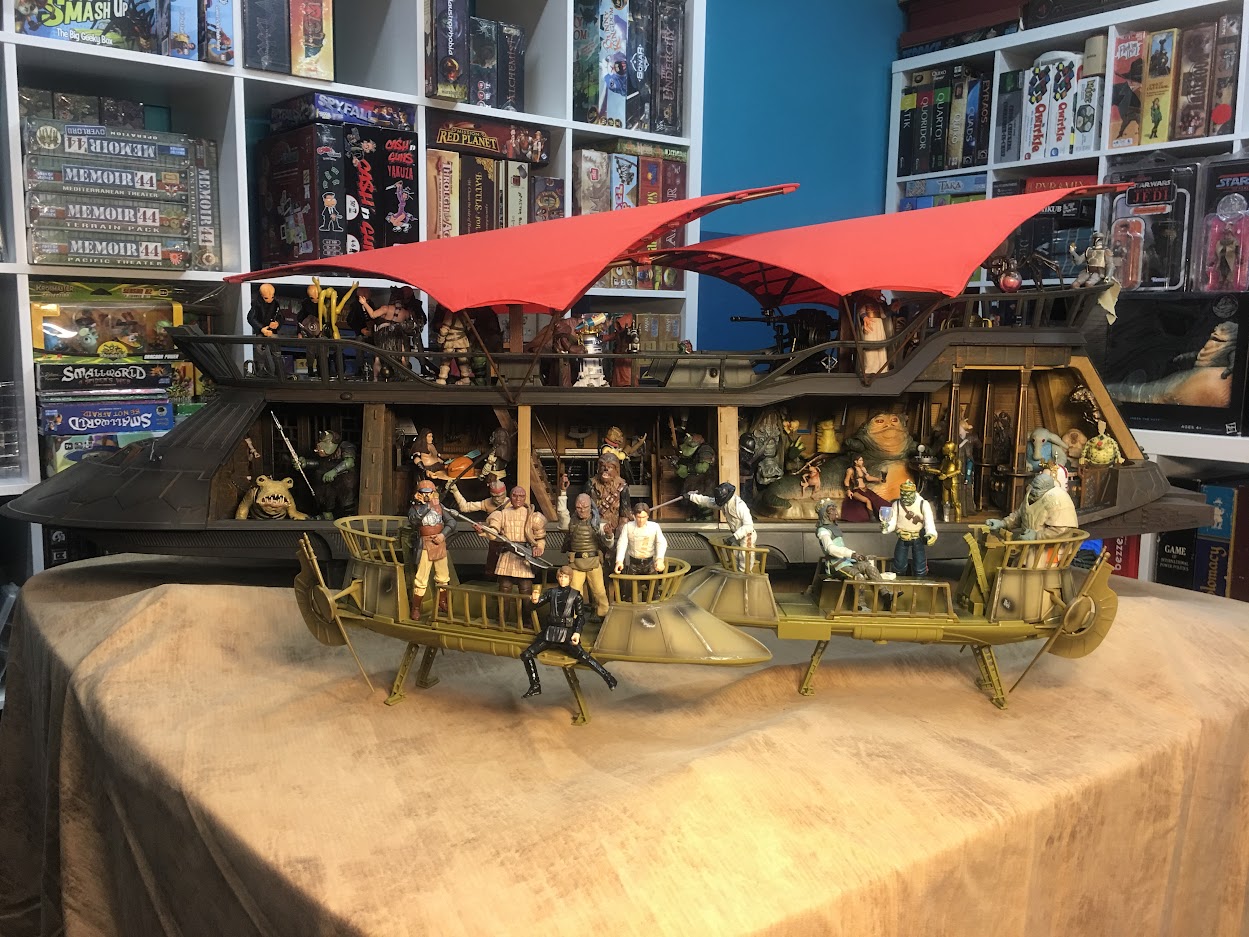 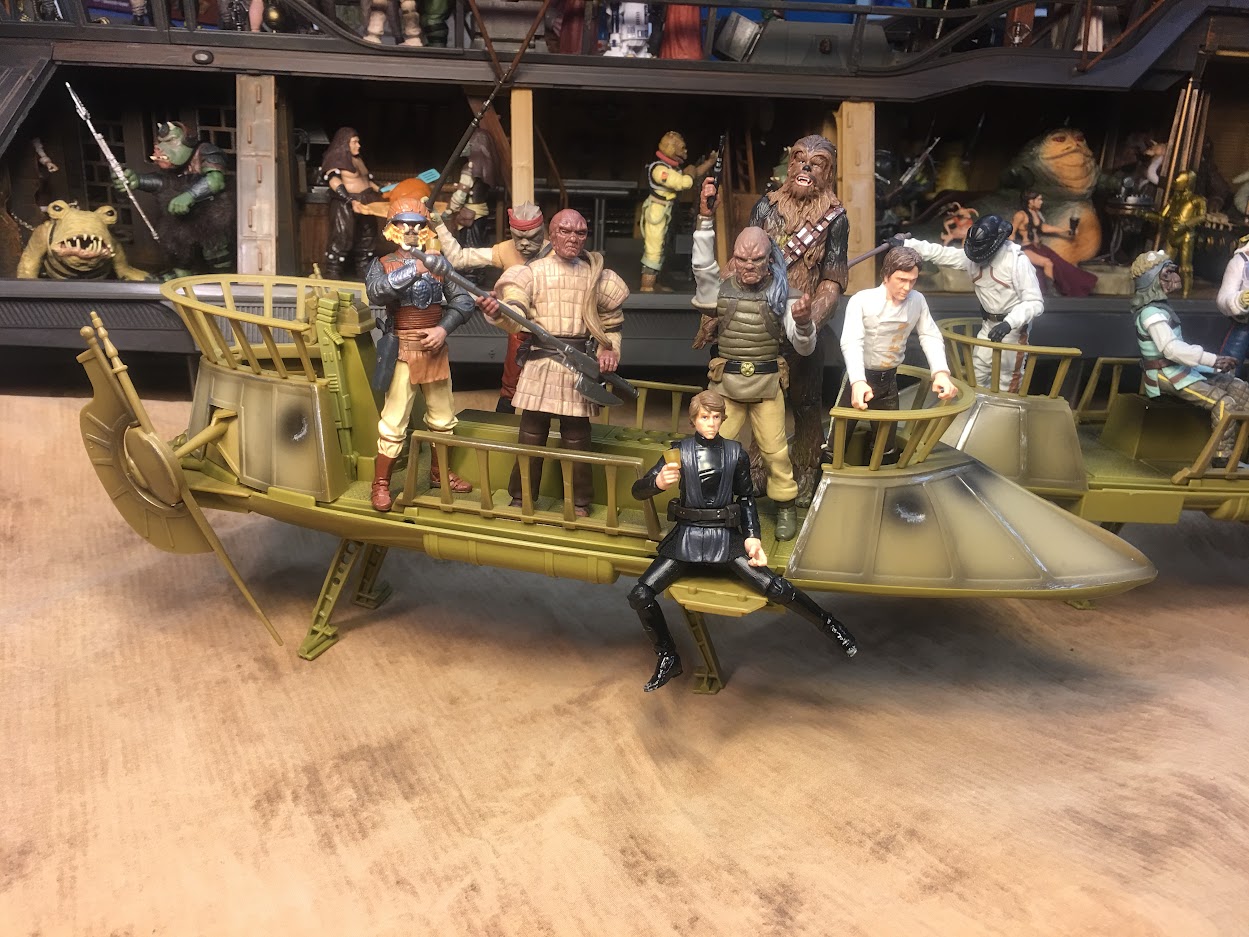 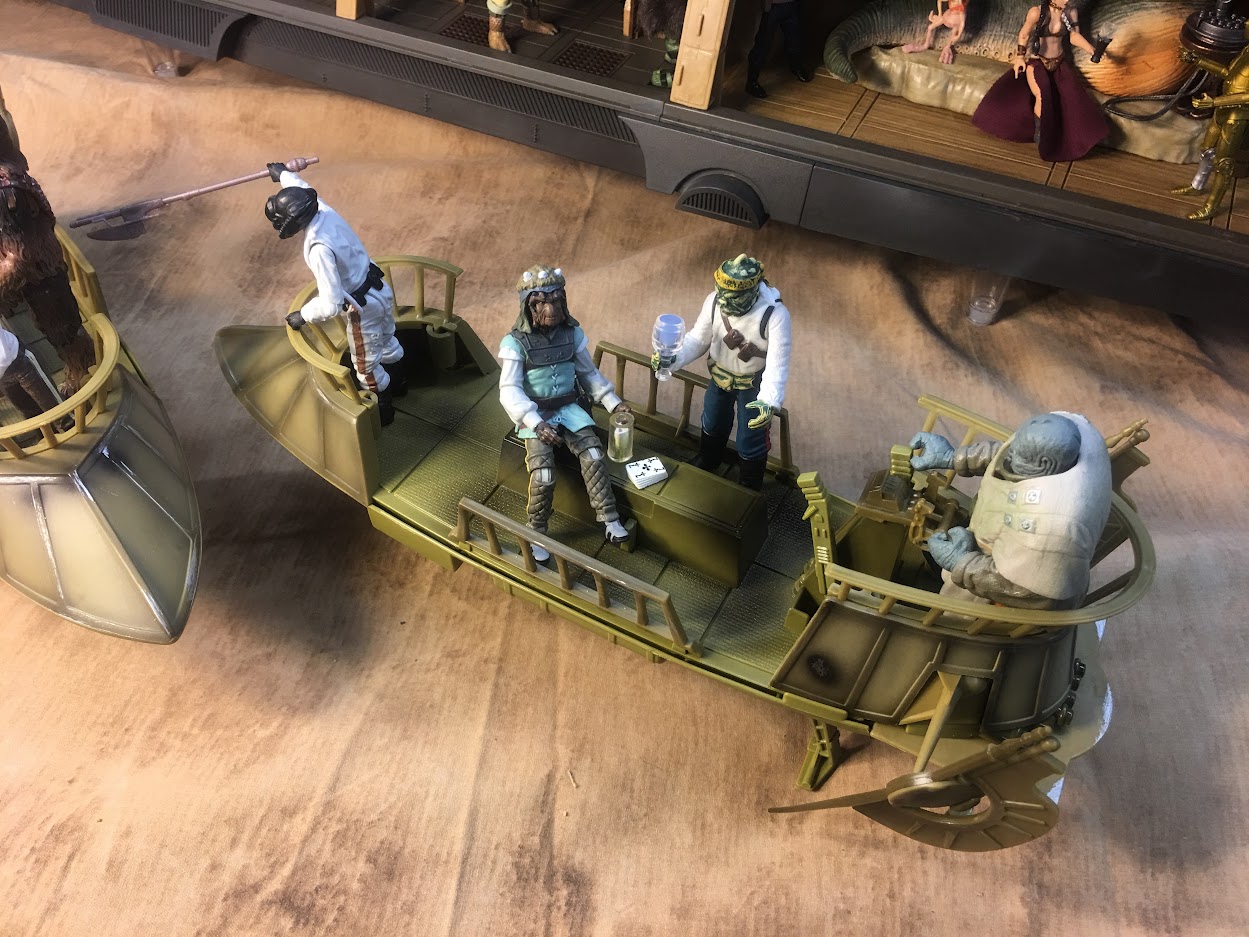 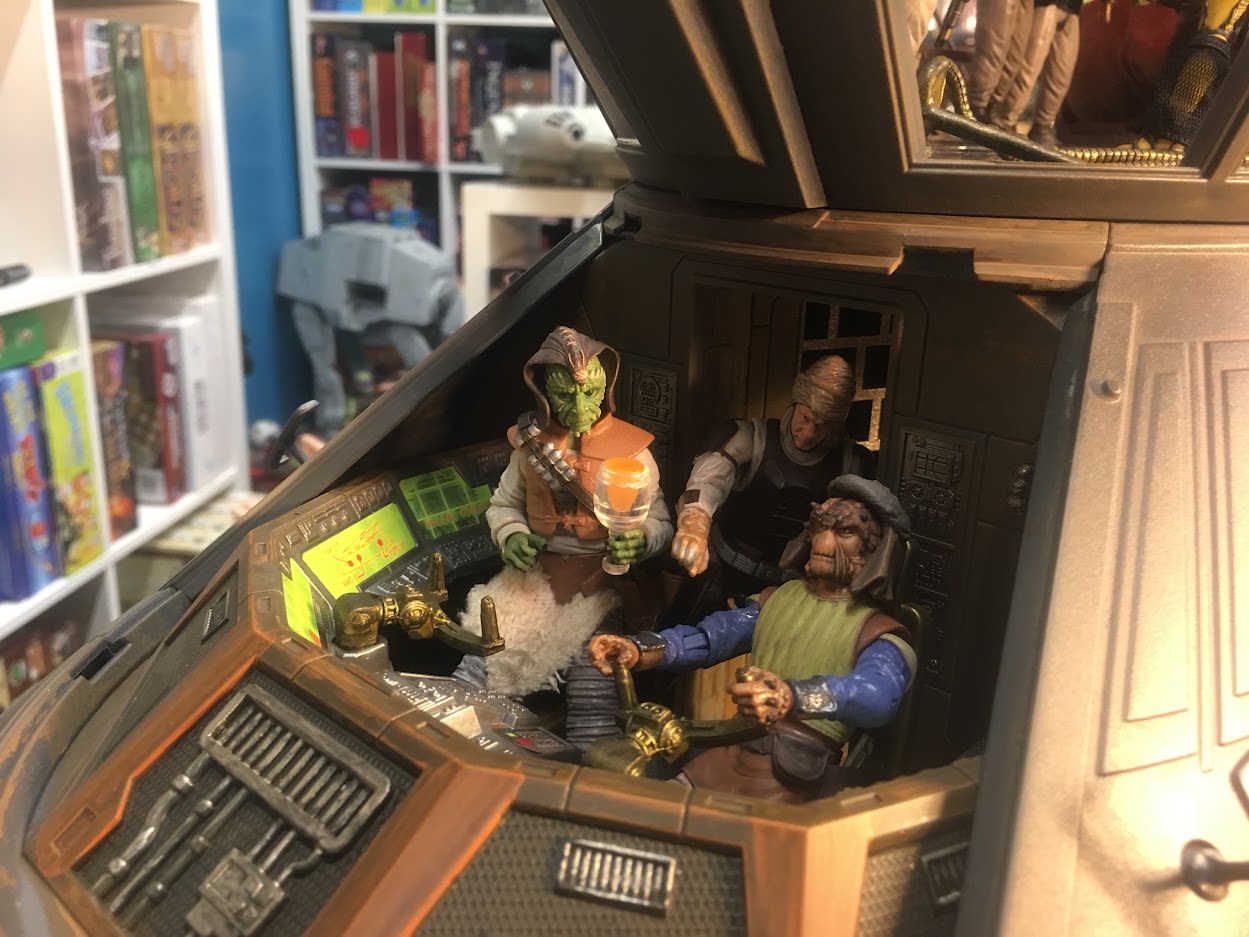 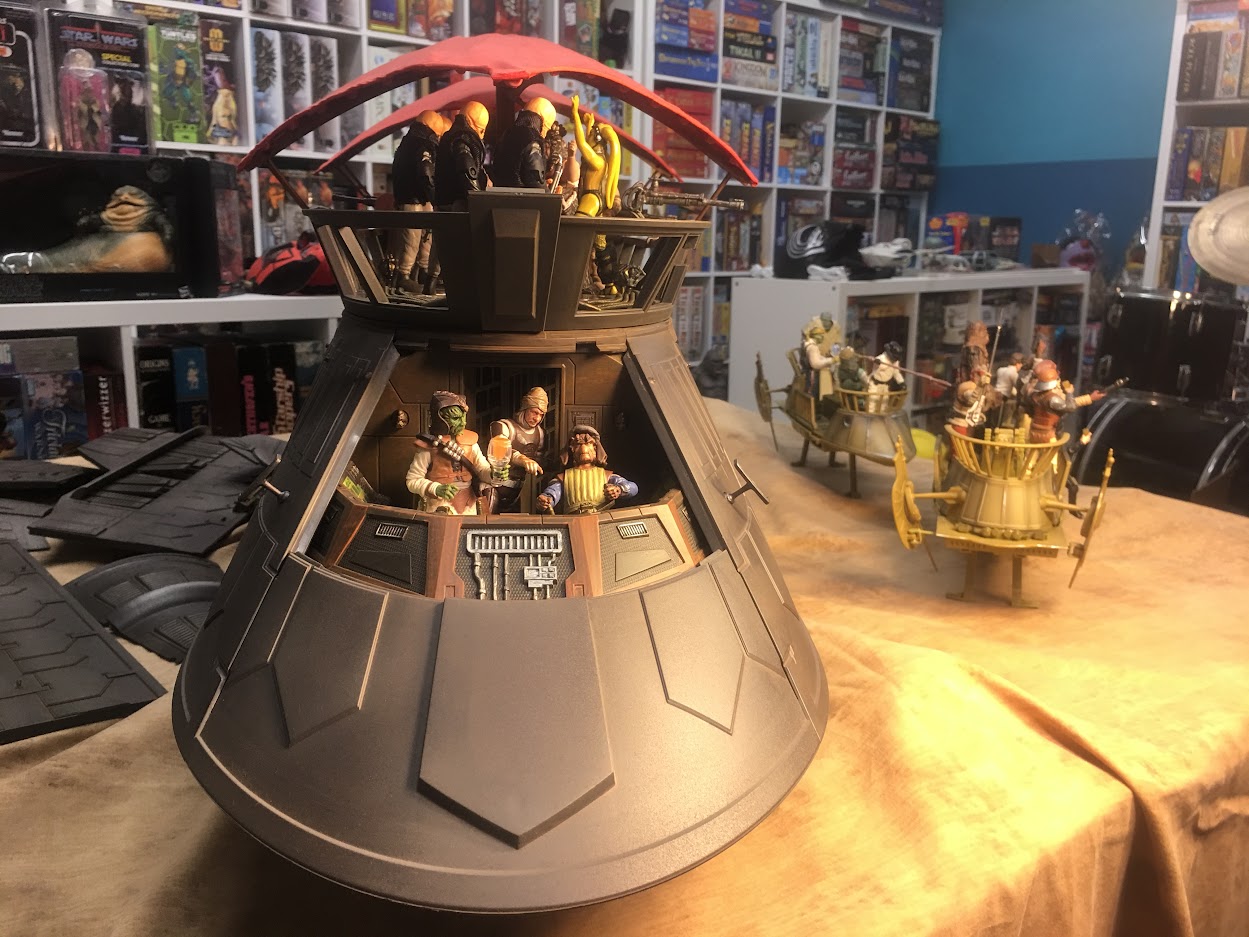 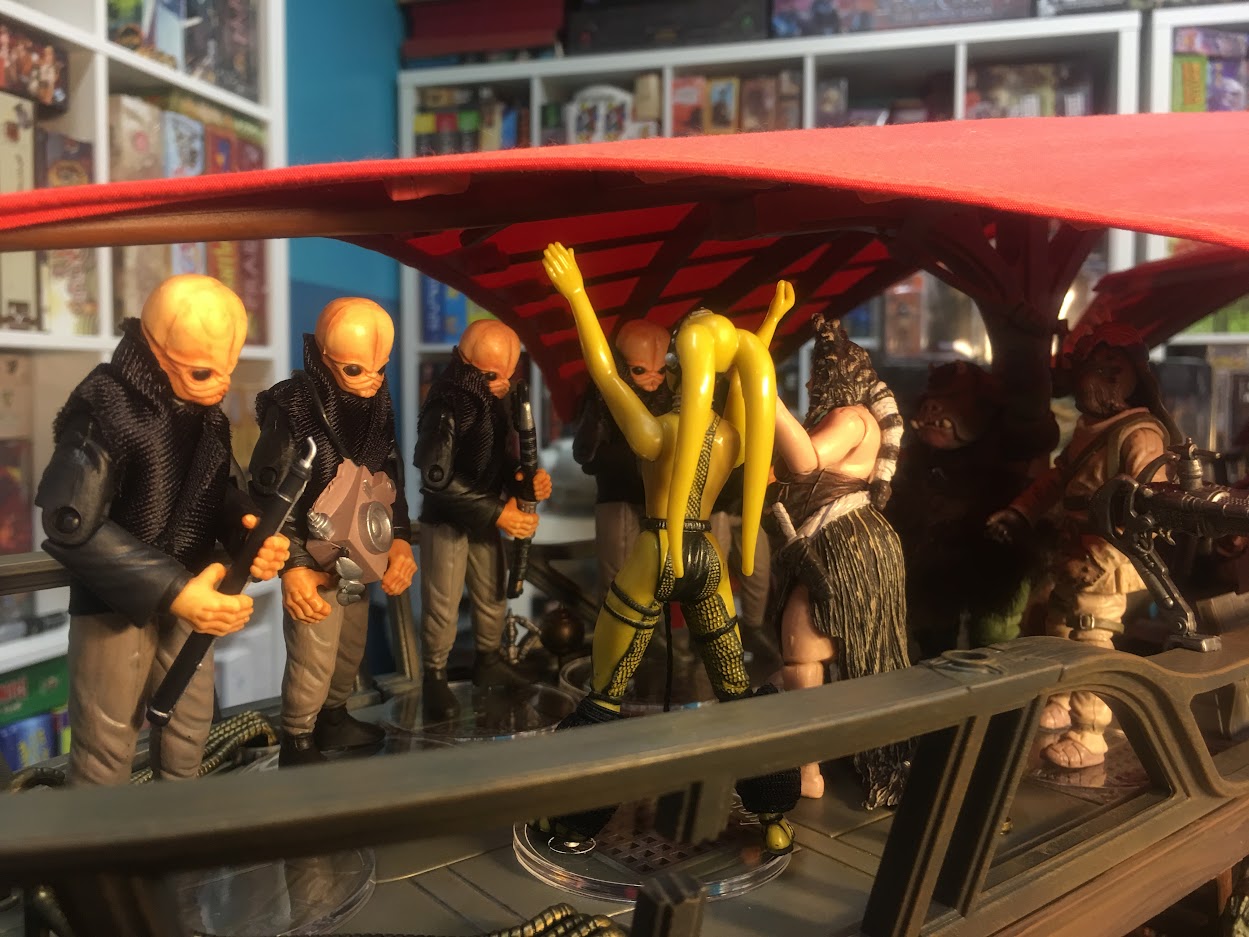 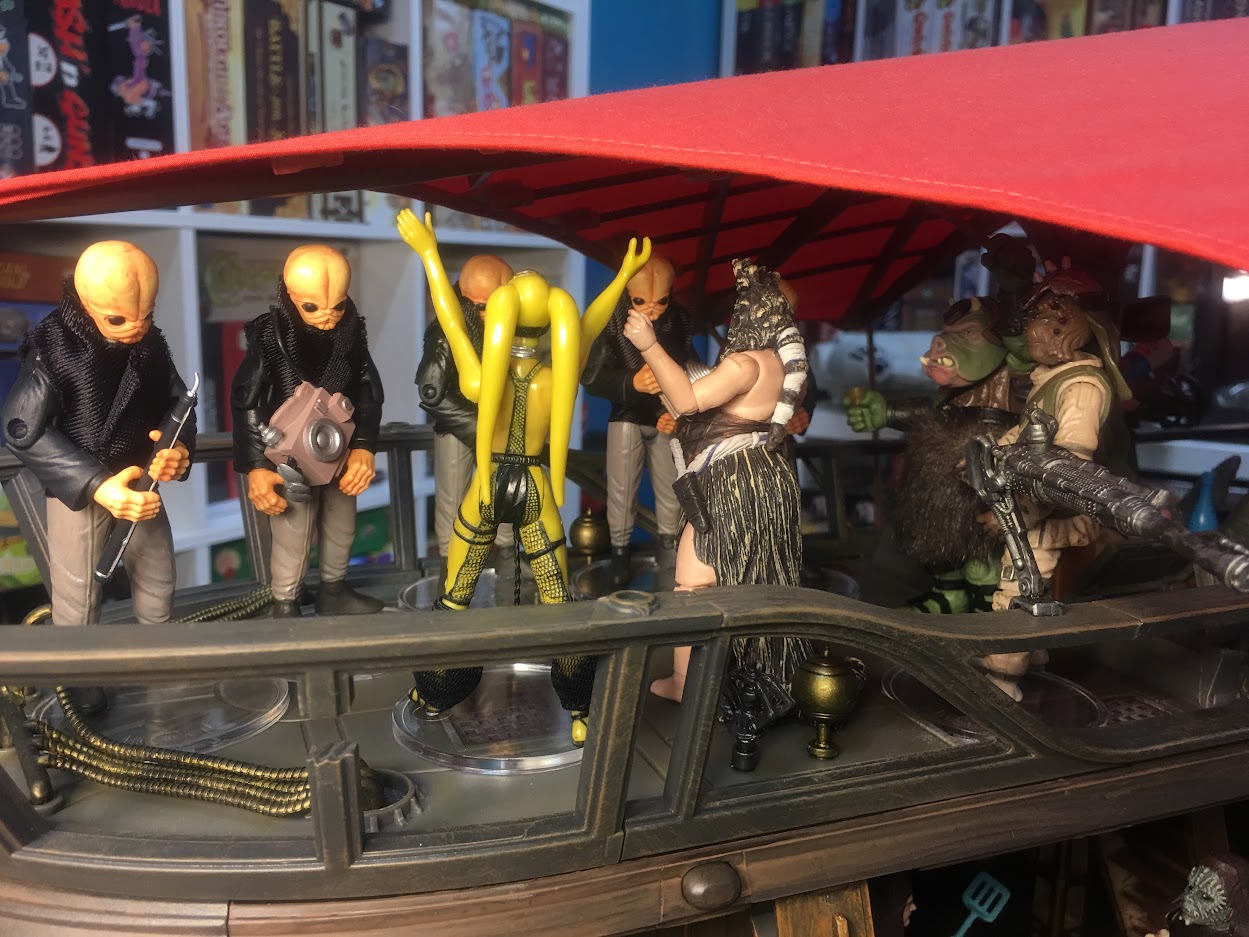 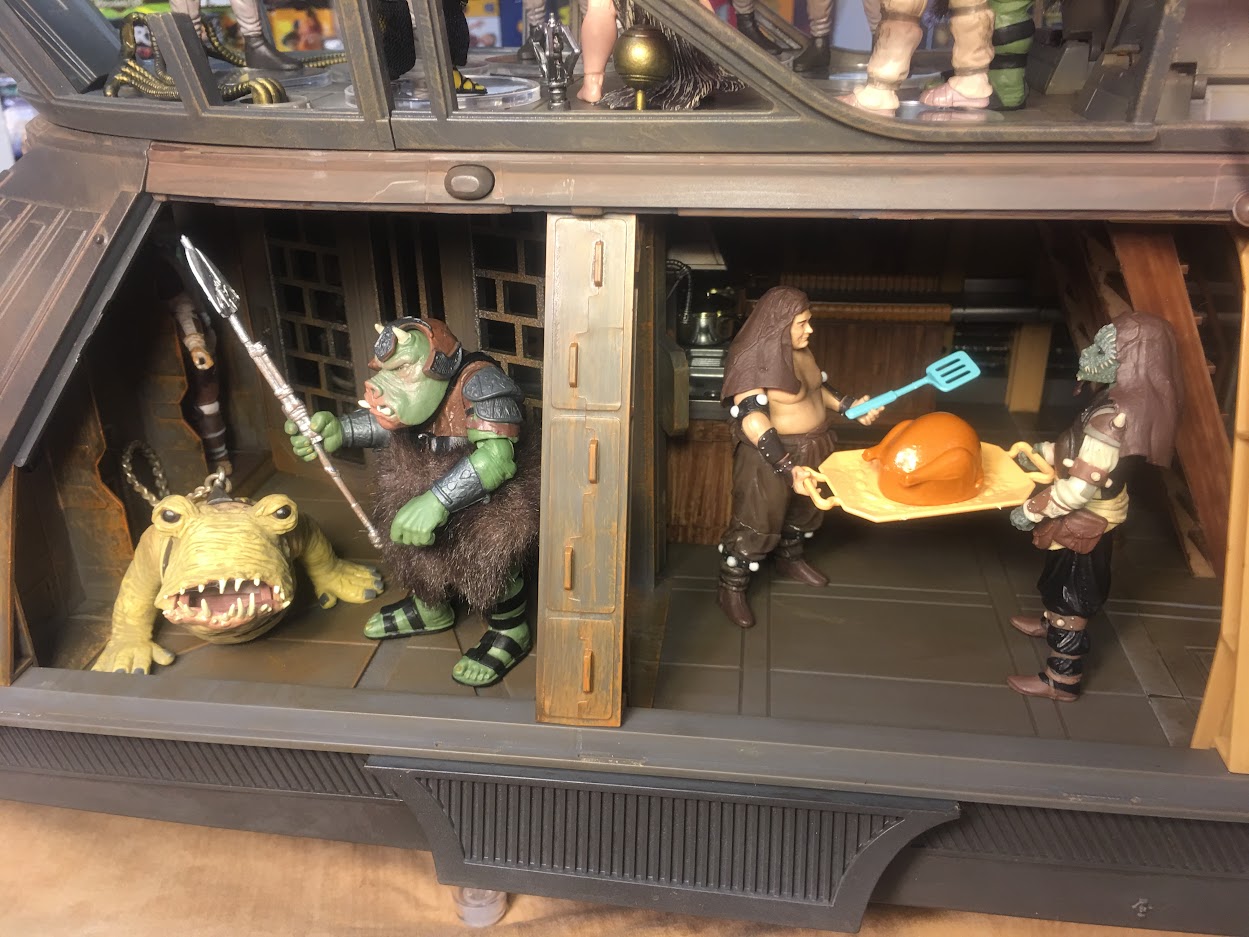 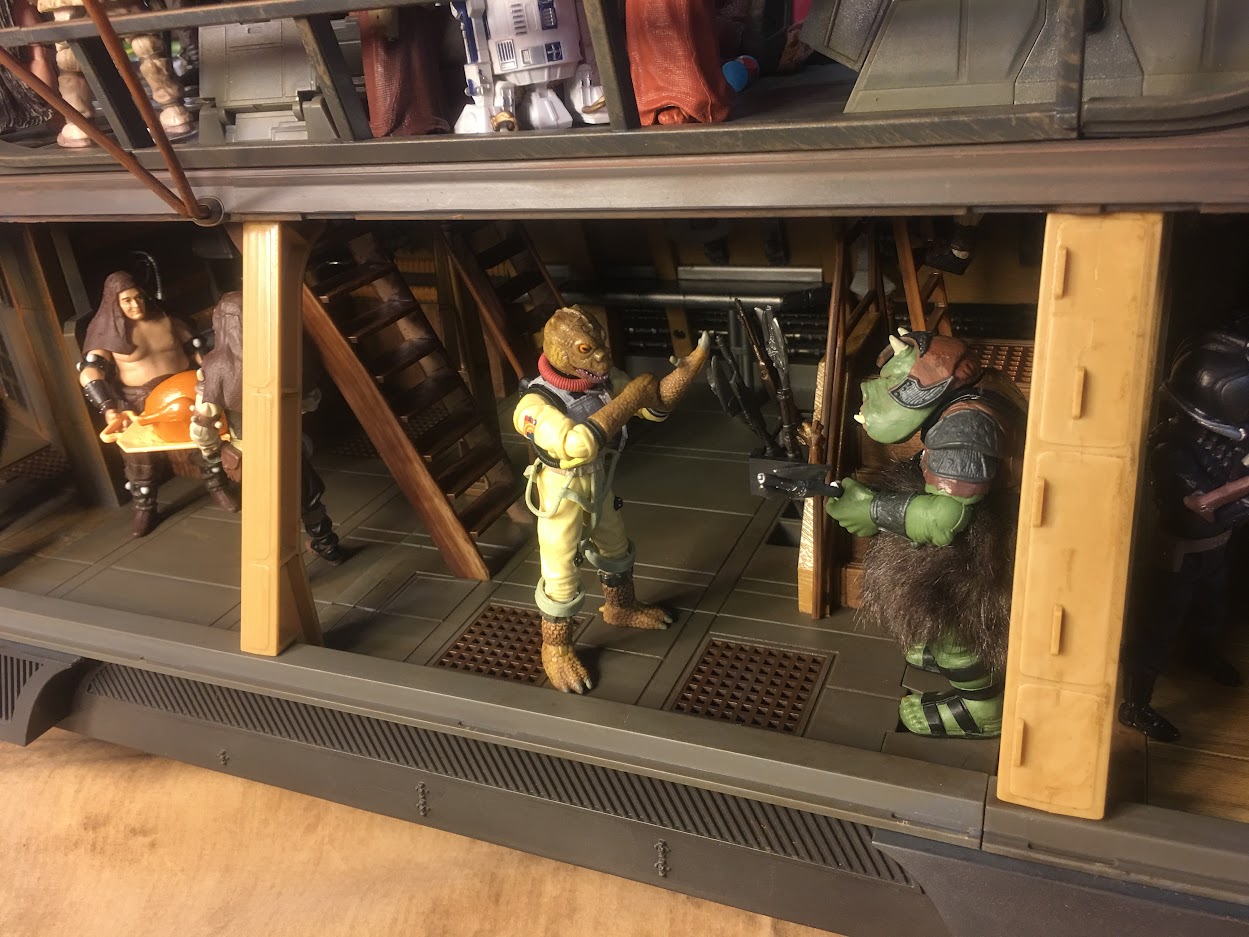 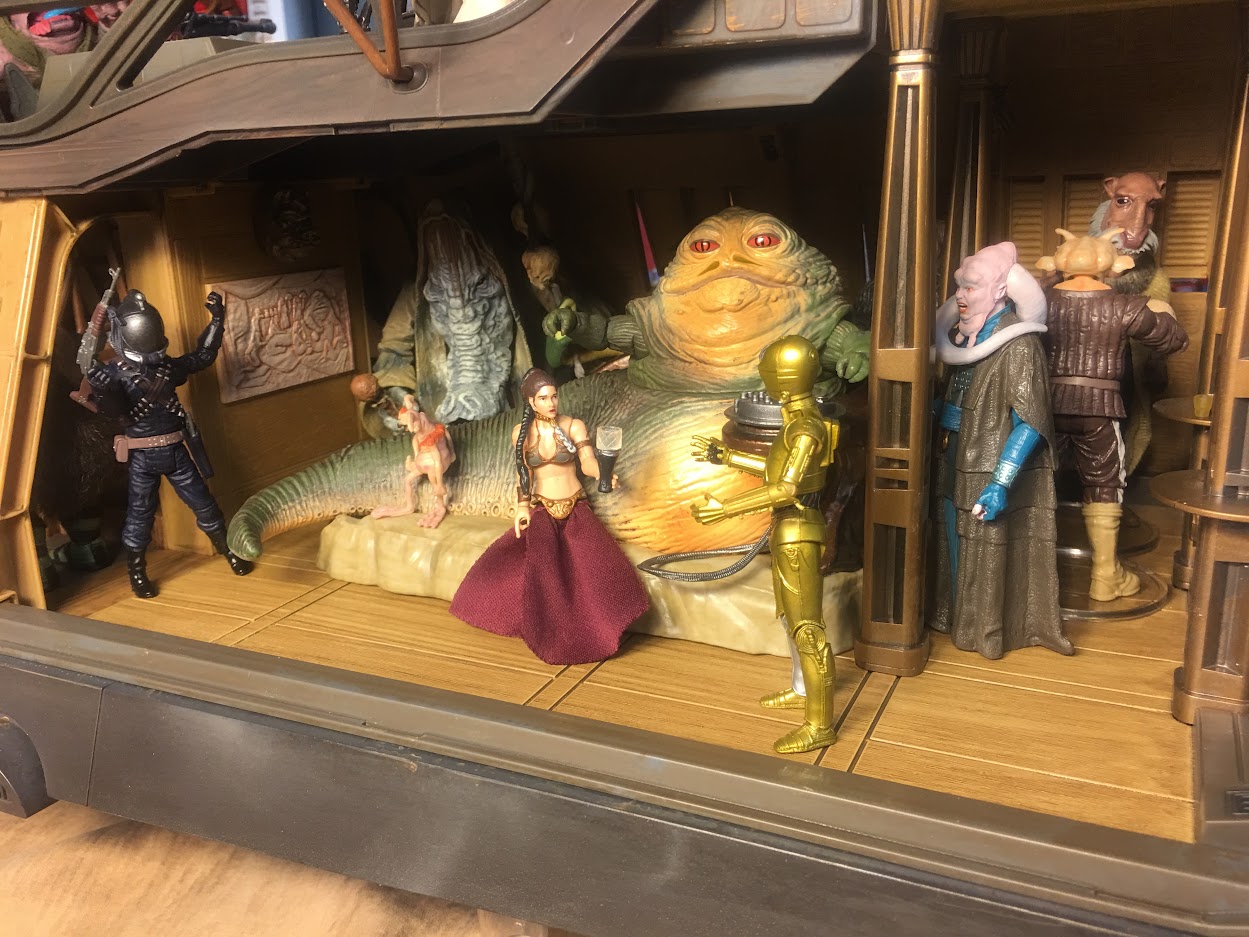 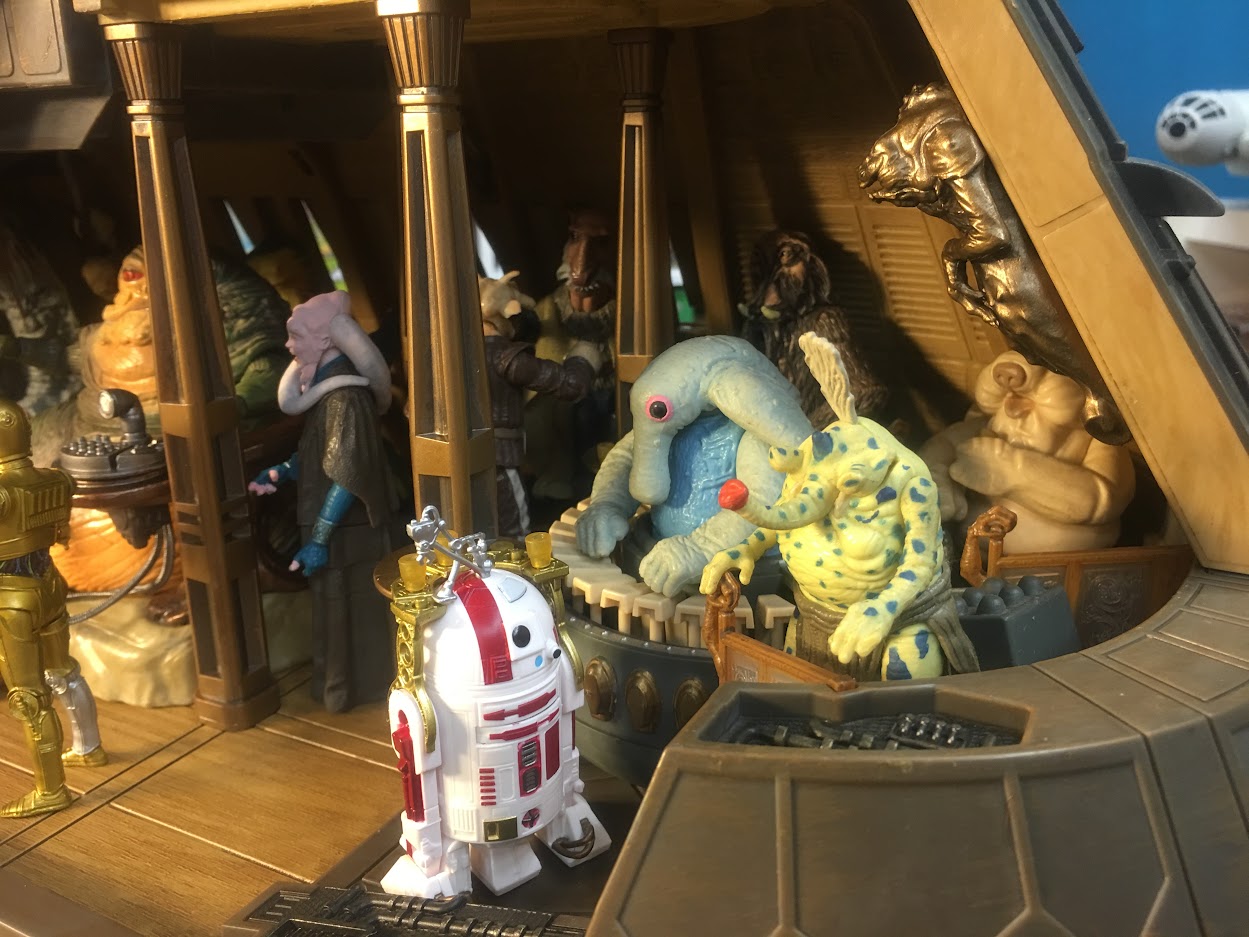 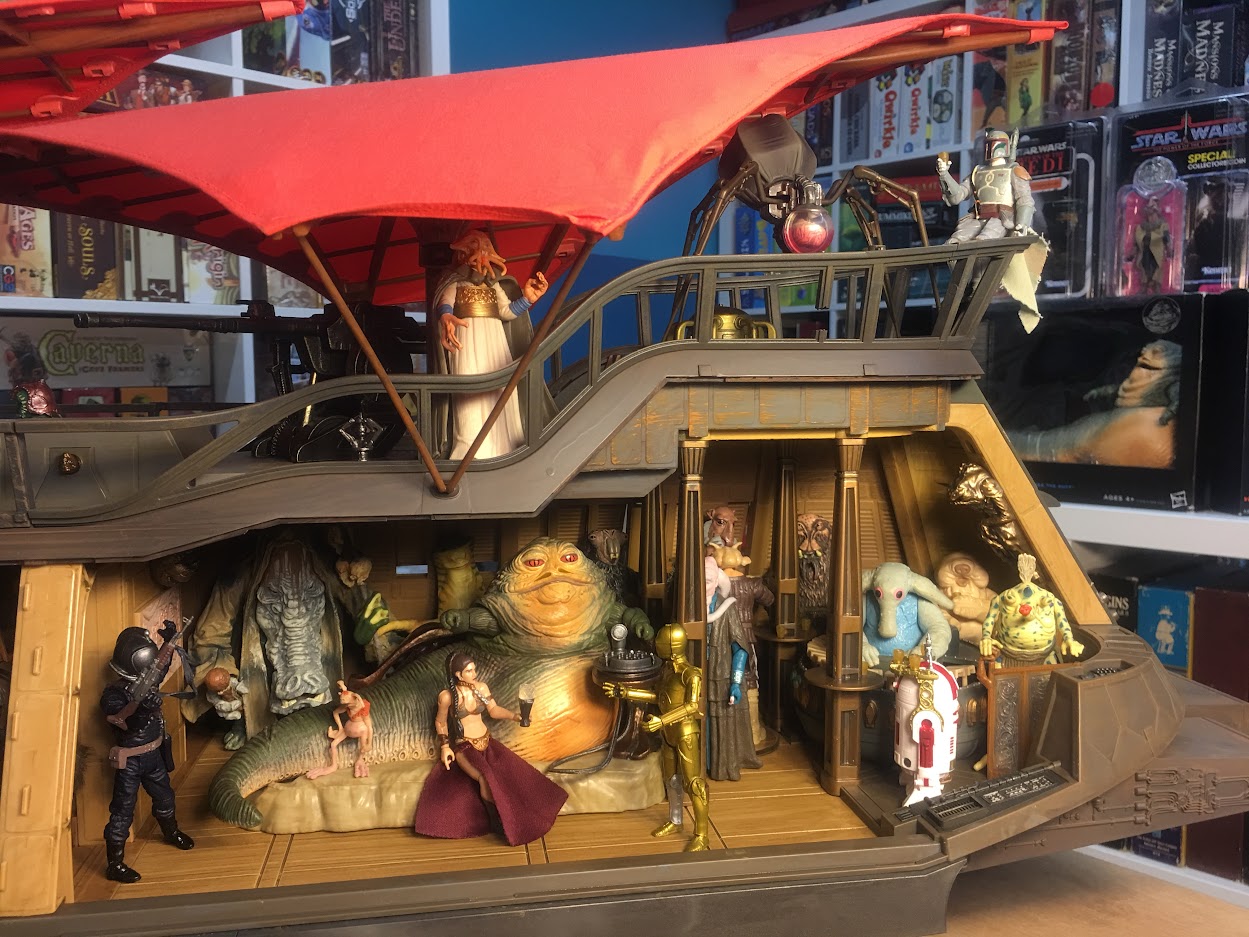 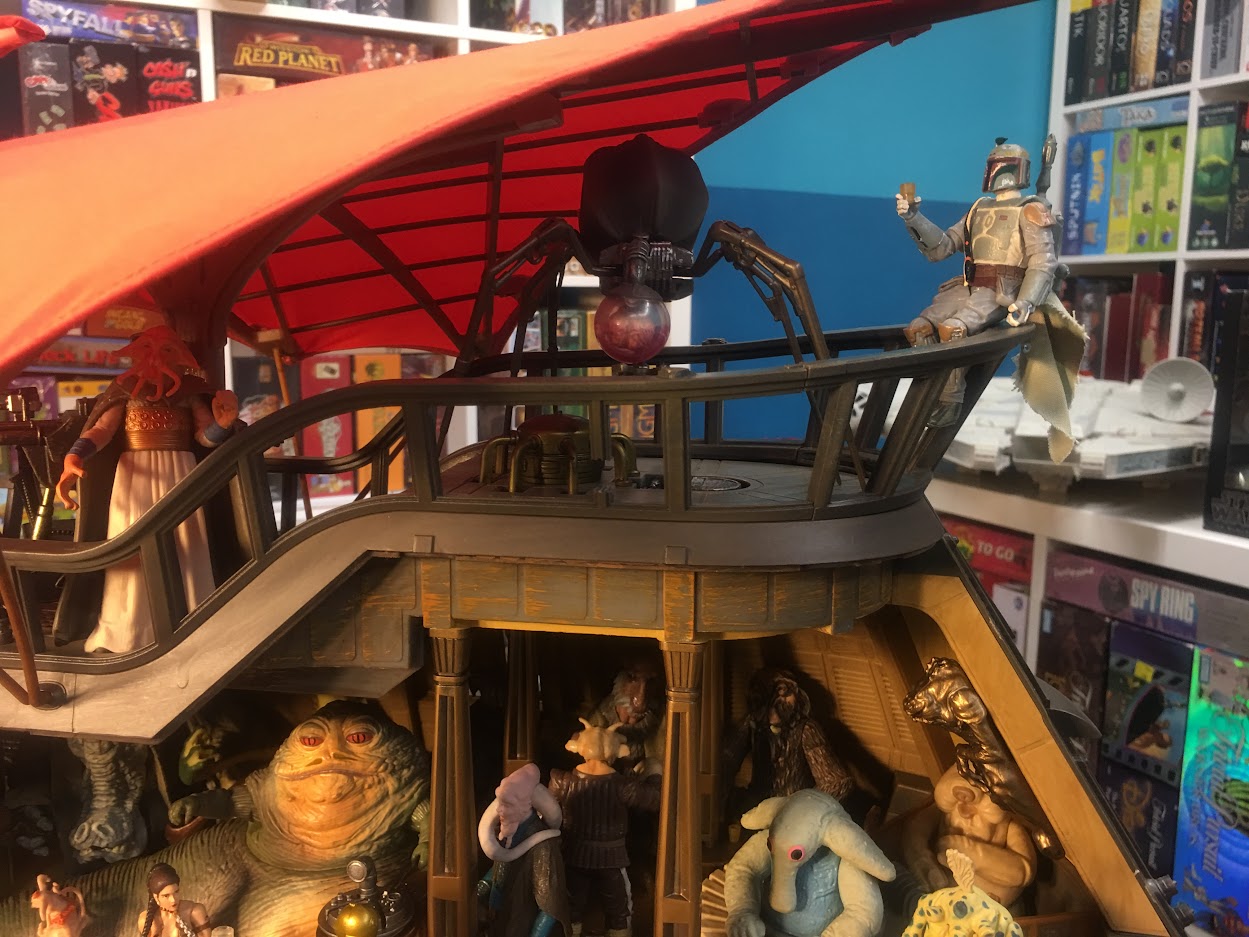 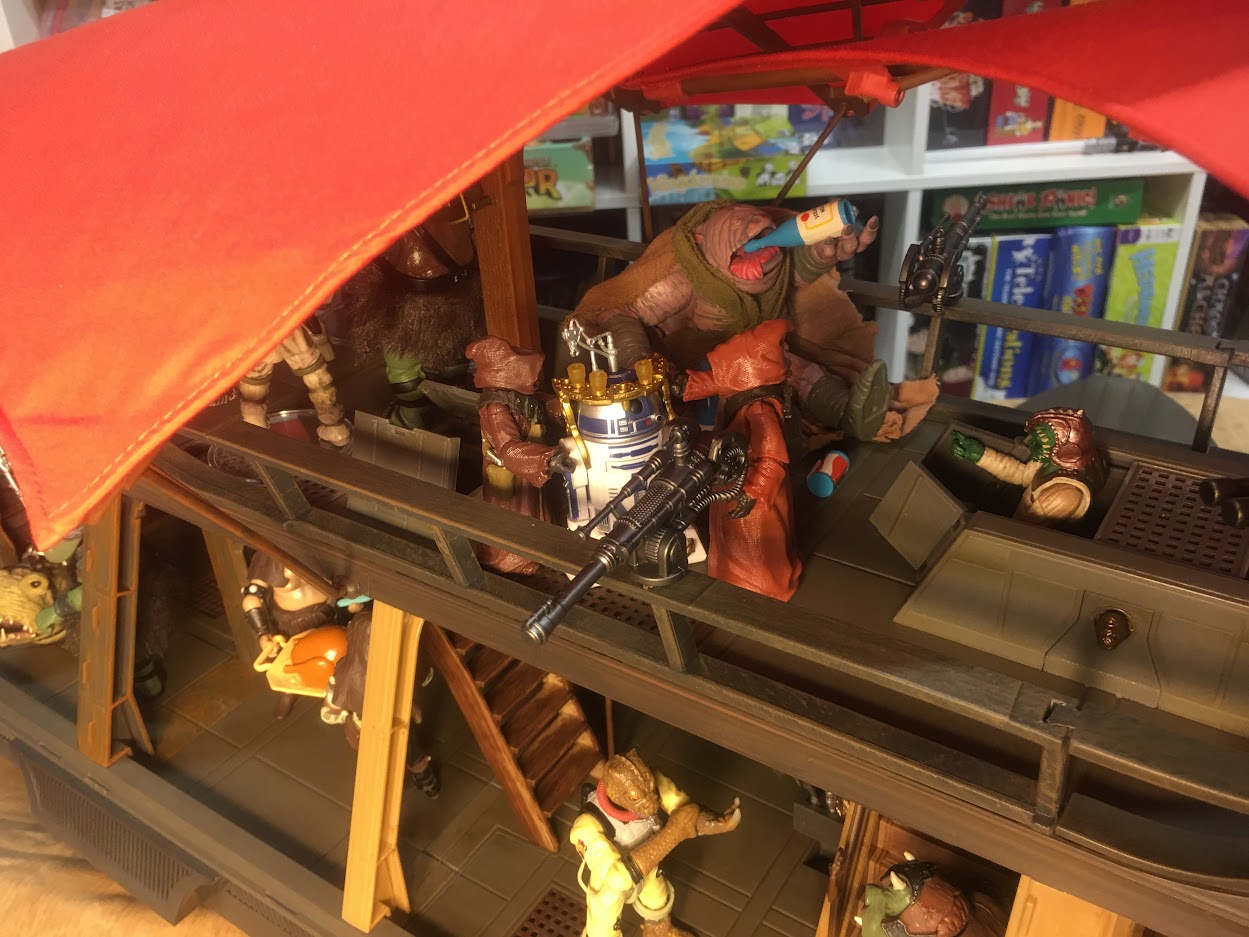 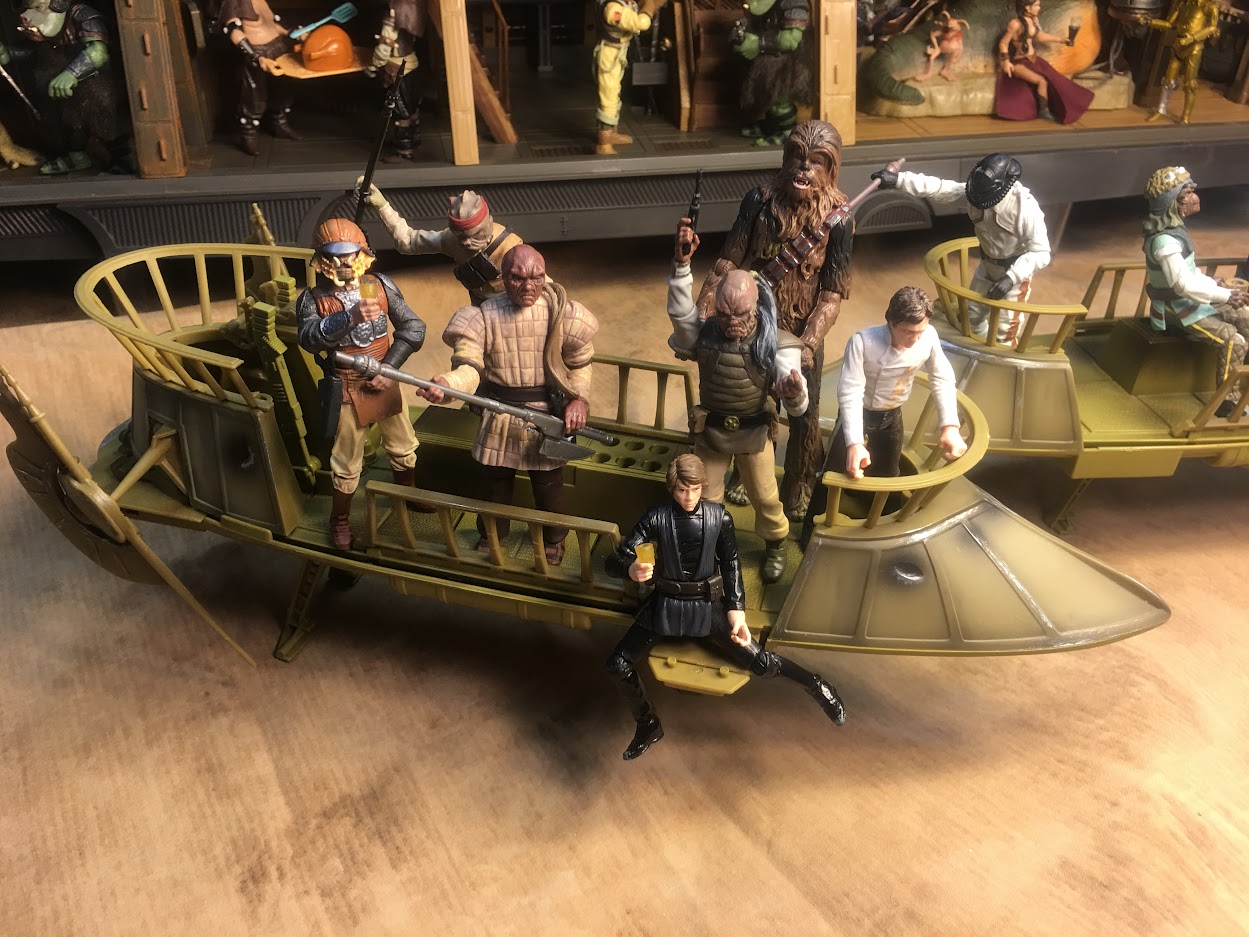 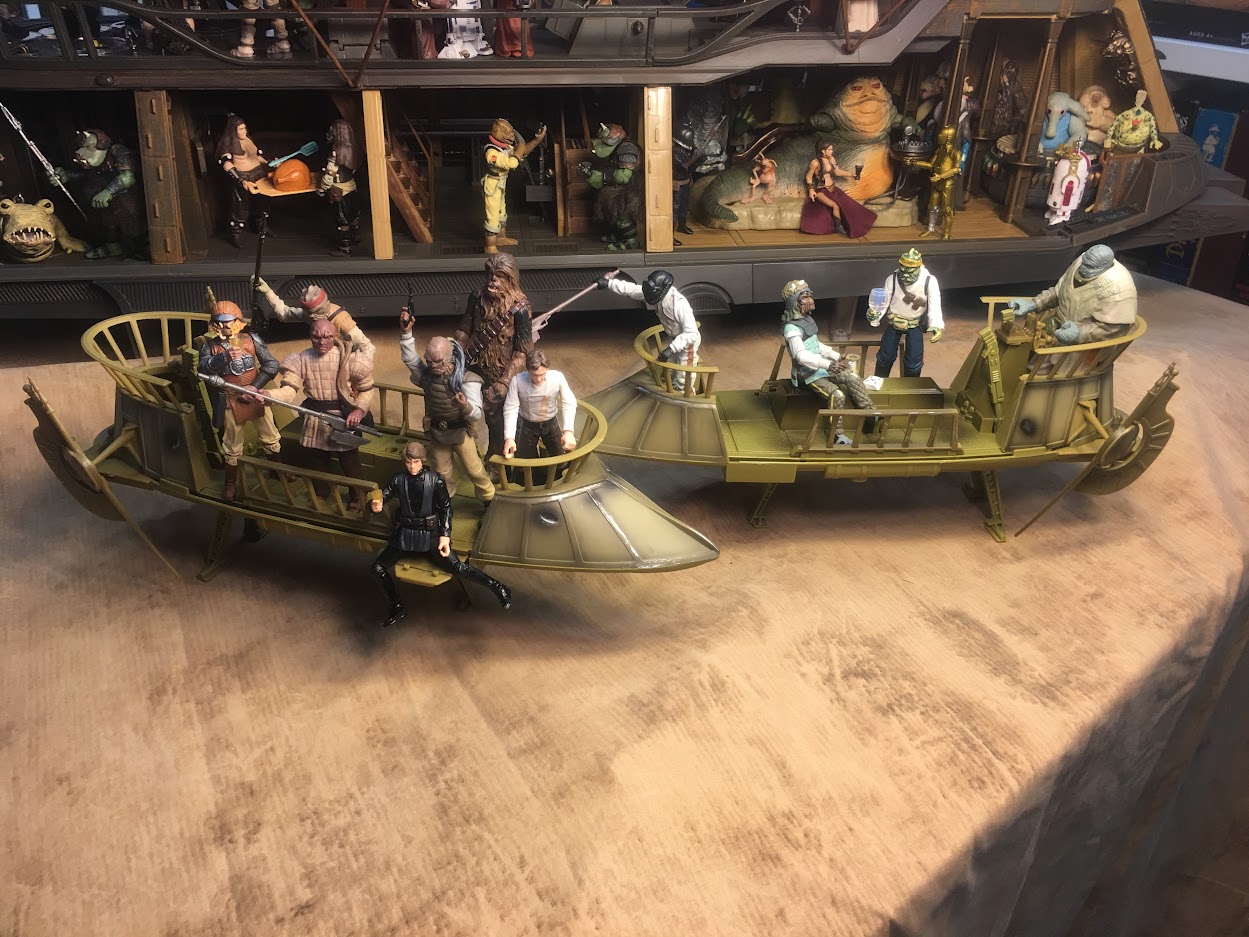 Believe it or not all the things you just described still exist.

Yes, but now there’s a whole lot of crap floating around in and polluting the Star Wars pool (bad/mediocre prequels/sequels, “special” editions, active suppression of the original movies, etc.).

Star Wars was better back when the worst thing you had to worry about were Ewoks.

Before the dark times…before the Empire!

This makes no sense. Just ignore what you don’t like.

If becomes hard to ignore when you have three quality films to start with that then get actively suppressed by their creator and replaced by bastardized versions, then you throw a bunch of crappy prequels/sequels into the mix (degrading the overall quality of the franchise and removing any potential for prequels/sequels that are actually of value), and you’re left with a bloated mess oversaturating and debasing a once proud trilogy.

I much preferred when ALL the films were good, and there was still the POTENTIAL for quality prequels/sequels. Because if we are only going to get one good movie out of every six or seven new films, then it’s probably better to just leave the Saga alone and make something original.

Believe it or not all the things you just described still exist.

Yes, but now there’s a whole lot of crap floating around in and polluting the Star Wars pool (bad/mediocre prequels/sequels, “special” editions, active suppression of the original movies, etc.).

Star Wars was better back when the worst thing you had to worry about were Ewoks.

Before the dark times…before the Empire!

Most Disappointing:
Instead of a sequel trilogy that is a natural progression from the original three movies (with events that would logically proceed from the state of affairs as we left them), they decided to do a hard reset so they could make a soft reboot depicting another Empire vs. Rebels affair.

Most Satisfying:
I mostly liked how they handled Kylo Ren.

I thought the origin of the Tie Fighter scream had already been clearly established:

I’m not saying drop it, but controlling the way you live your life is a bit much. I don’t see Disney forcing everyone to wear Mickey Mouse Club ears and sing It’s A Small World After All under pain of death anytime soon.

How come mace windu isn’t with the other Jedi in the celebration?

All the memorable PT characters got cameos during the opening flyover shot of ANH.

Hmmm…one of us seems to be in the wrong thread.

Well, I know I’m certainly in the right thread. People were posting how many times they had watched TFA, so I followed suit (and then I also posted the amount of times that I had watched the other Star Wars movies to provide context).

So, I guess that just leaves you (but it’s OK, I don’t mind a few extraneous postings).