Speaking of praxis rings on explosions, I made a edit for my new A New Hope fanedit that has a new explosion for Alderaan that doesn’t look “too modern” or “stitched from two seperate explosions” like in the theatrical, and no praxis rings.

I think it should stay the way it was in the original theatrical cut , no dialogue from Vader in that moment was great as is and his looking back and forth between Luke and the Emperor expressed his internal conflict perfectly without saying a word , plus the music also sold the scene .

I totally agree, the original scene is a classic.

FWIW, the crying rancor keeper is one of my favourite moments. It’s the most creative moment in the whole Jabba sequence, IMO. It adds a bit of depth to the world, and it’s just plain hilarious.

I can understand why it’s polarising, but my vote is for keeping it. I also love the ironing droid in TLJ, so maybe I just have a thing for bathos.

I like the rancor keeper too. Made me laugh when I first saw it as a kid.

I tried turning a still of the Death Star into “3D” using a displacement map to make it look like it was turning slowly and it seems like it could be pretty convincing.

That is a thing of beauty!

I’m also wondering how we all feel about deleting the line “It is too late for me, son.”

Personally I love that line, a great bit of voice acting and really adds depth to Vaders character. Makes him seem real rather than just a cut and paste bad guy. I remember seeing it at the cinema on first release and thinking, wow maybe, just maybe Luke can get through to his Dad.

Our sun is not the smallest possible yellow star, so for size of solar system calculation, it needs to be taken into account, that the size of the sun of the Hoth and Bespin system, that is still a yellow star, can be smaller.
Based on data, I think 40 AU system edge is reasonable, but of course suns could be even closer, but it is good enough for rough estimation.
So a 40 AU trip with 5 million km/h would take about 50 days. Double that and we have a 100 day trip between Hoth and Bespin.

I checked the Falcon, and it has everything to accomodate a long journey like this.
And it gives Luke enough time to train on Dagobah.

Don’t overthink it. It’s a fantasy movie set in space. It is NOT science fiction. The falcon always travels at the speed of plot and the distance to Bespin is exactly far enough that the falcon can get just there.

If I were to put in my two cents, I’d say the eyebrows give him too much of a kindly old man look, which I don’t think is appropriate for the character.

I agree, lets lose the eyebrows.

I don’t think it’s weird. It shows Luke considering two options. Risk submitting to the dark side by attacking Palps or staying true to the light. He looks back and forth twice because he is mentally flipping from one choice to the other and back again.

Hey Ady, the new shuttle design could be a lot bigger, allowing room for heaps more rebels. I’d love to see a quick scene with 100?+ soldiers all buckled up aliens style.

And to those that say that part of the backlash against TLJ has nothing to do with racist/ misogynistic/hompophobic feelings in the SW community, you only have to see this one post on facebook and read the comments:

And that is just ONE post. I’m seeing shit like this all the time. It’s starting to flood the net now. My Youtube channel got spammed with this type of crap and its all over facebook. Comments galore about how Kennedy is pushing a female agenda and making all the males into pussys, pushing forced diversity just for the Asian market, that they didn’t need all this shit in the OT and the prequels did a proper job at showing what the races really are like, how Rey should have been a guy and it would have made her being so powerful believable because women are weaker than men, and it goes on, but there is so much that i would never repeat.

Yes, its fine that people don’t like this movie, but you cannot deny that a large section think they are on a crusade against anything that isn’t white powerful and male. It’s gotten a lot worse since a certain person was elected as now they think their beliefs are accepted. It just makes me sick what the fandom has become. 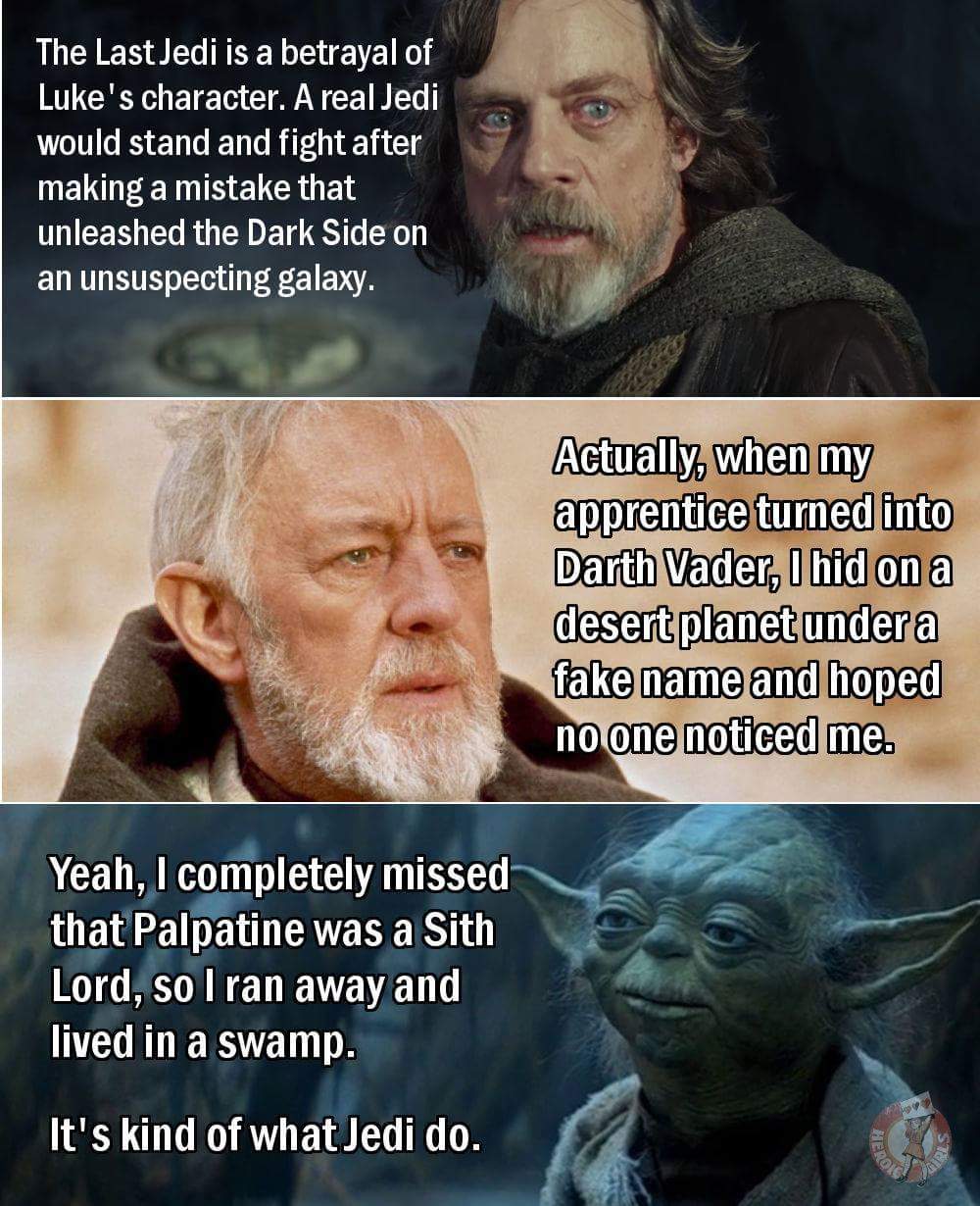 Don’t know if possible (but could be since Adywan plans to shoot nex scenes): when the rebels get on the ground, show Ewok dead bodies to stress the fact they already are imperial victims.

One cool thing I loved about this. Luke helps the rebels escape and inflicts a symbolic blow to the FO… and doesn’t kill a single person. Very Jedi.

Good article from a self-proclaimed fan, that I agree with:

Title: The Last Jedi was more a finale than a middle act. That’s not good for Episode 9.

I really get the sense from TLJ, that RJ made the film he wanted to make, and didn’t really care that it was supposed to be part of a greater narrative both in terms of the saga, and in terms of the third trilogy. He’s resolved pretty much every story thread that was set up by TFA, and has provided very little connective tissue to the rest of the saga, or setups for future installments. Much of the hype for TLJ was based on fans speculating about the outcome for setups of TFA, and how it will connect to the characters and the rest of the saga. RJ has effectively killed that in my view, which I think is a shame.

I disagree, I think its a great setup for IX which could be set a couple of years after TLJ. Maybe the kid with the broom was not an isolated incident, the force may have awakened in lots of young people. Rey has the jedi texts and could have been training them to fight the FO and the knights of ren (we don’t know they are dead after all). IX could be mass battles between jedi and sith armies.

You think Snoke is going to be the next Palpatine (ie. big bad who dies at the end of the third film), but he’s not.

You think Luke is going to mentor Rey but he doesn’t.

You think Leia is dead but she’s not.

You think someone or something on the Light Side is connecting Rey and Ren, but it’s Snoke, but it’s again not really.

You think Finn is going to destroy the tracker but he doesn’t and gets caught. You think there’s no way out except then BB-8 shows up in a chicken walker.

You think Poe is going to save the cruiser but he doesn’t.

You think it’s the Vice Admiral coming through the door but it isn’t.

You think Luke is on the planet fighting Ren but he’s not.

You think Ren is going to kill Rey but he doesn’t—he does exactly what Vader wanted to do in ESB but couldn’t.

It’s the best thing about the film. It keeps throwing curve balls.

Oh, and that business about Rey’s family being nobodies from nowheresville, Ren told her that. There is no guarantee that he was not lying. But even if he wasn’t, I like the idea that not the whole of the The Force hinges directly on descendants of the House of Skywalker (as many people speculated that she was a daughter of Luke or Leia).

Good analysis. The best I’ve read so far! I loved the film. The code /casino plot were the weakest part but everything else was superb. Highlights were Lukes version of the night he almost killed Ben / The Rey-Ren connection / the throne room scene and the final showdown between Luke and the FO.

I hope Ep IX centers around Rens desire to capture his mother ALIVE and the accidental death of her during a capture attempt bringing him back to the light. But we’ll see. I’d also love to see Luke haunt Ben as he said he would rather than train Rey.

PT or not, the story is that Vader took a tumble into lava. I don’t see any reason to omit the eyebrow removal change just because it kinda references the PT.

Honestly I think he looks a whole lot sillier with the eyebrows.

Are people saying that it should be removed from the celebration? Can’t it just be implied he picked it back up while he was slowly dragging Vader’s body down to a shuttle bay?

Sounds good to me.

You don;t need to put the receipt number in here. Probably best to delete that. Not sure if people can use that number

Since Ady is replacing the Tydirium with a cargo ship, how about one that is much bigger. Then it could hold a couple hundred rebel troopers. These could be the troops that defeat the imperial ground forces with just a little help from the ewoks.

It would be cool to see a shot of the rebel troops on route to endor strapped in like the drop ship scene from Aliens.

“We have stolen a small Imperial shuttle.”

Maybe the empire would consider a shuttle that can only carry 200 as small.

However, if the line needs changing to remove the word small, I am sure that could be done.

Since Ady is replacing the Tydirium with a cargo ship, how about one that is much bigger. Then it could hold a couple hundred rebel troopers. These could be the troops that defeat the imperial ground forces with just a little help from the ewoks.

It would be cool to see a shot of the rebel troops on route to endor strapped in like the drop ship scene from Aliens.

PT idea, Sorry if this is off topic but others are discussing it.

:: In case you've forgotten, you were warned about making off-topic posts last week. Maybe a temporary ban will help you remember in future.

Oh and I love the original jerky mechanical motions of the walkers too. Bit of a homage to Ray Harryhausen I reckon. However for the taun tauns I like the new fluid motion, after all they are supposed to be alive.

I am glad to hear that the AT-AT doesn't fall. I like the fact that in the original movie they only manage to take out a couple of walkers. the battle of Hoth was a walkover for the Empire. Showing more walkers getting destroyed would lessen the impact of the story.