I loved Ady’s DVD cover for ANH-R, but I don’t think he’s doing one for ESB-R or ROTJ-R.

Aren’t we still getting a DVD-9 of ESB-R and an extras disc before we start getting HD versions of the OT?

Duel of the fates in the new tv spot got me so pumped! Each new second of footage takes away any doubts I have about this movie

Imperial March mixed in as well.

But the Palpatine return is a real problem.

If the Rey thing is true, that makes it even worse.

Every new clip or TV spot just cements it further.

We even got the weird report, now proven true in the TV spot, about the giant floating cube on Exogol.

To me, ”They fly now” would have worked much better if only 3PO said it. He delivers it in keeping with who he was when he was in the asteroid field from Empire.

Not to mention that Finn should know about such troopers, and Poe has encountered jetpack troopers in his Marvel (Disney) comic.

Troopers with jetpacks is far from a new thing.

So much for Disney respecting the EU.

It’s this, more than the humor in and of itself, which has fans ripping it a new one.

pleasehello said:
Isn’t that what Rian Johnson tried to do? RJ may be the most “auteur” of any director to helm a Star Wars movie; he did something quite different and people hated it.

I think there is a fine line there. With Star Wars, you can take some chances.

But there is a big difference between that and going off the reservation.

Johnson went way off the reservation.

NeverarGreat said:
I’d argue that actually trying to recontextualize elements of the PT would be more respectful than outright ignoring them, which is what the ST has essentially done.

But what is the difference if you end up in the same place, the total crapping on George’s storyline?

DrDre said:
Well, I don’t see why any and all forms of corporately driven expression should be considered art, just because a group of people put a lot of effort, work, and craft into it. A lot of people work hard, and are creative in developing products, doing research, motivating people, etc, etc. Yet, these people are not considered artists. However, if the product you’re working on is a movie, you’re automatically labeled an ARTIST with a capital A. I reject that notion. These people should be admired for the hard work, craft, and creativity they put into their work, and their product, like any other person that puts their best foot forward, but artistry is not and should not be a qualification that is so easily bestowed. In my view true artistry is a rare, and unique combination of imagination, creativity, originality, perserverance, circumstance, context, and timing.

I’m guessing that you’re one of those originaltrilogy.com members that wanted it to stay the story of Luke Skywalker and not be the story of Anakin Skywalker.

To each their own.

But once Lucas made that decision, and once it formed the basis of the six film story, I think it is a pretty slimy thing to crap on it.

Hal 9000 said:
I do wonder to what degree Palpatine is the sincere (potentially planned all along) conclusion of the story that’s developed, or corporate decision in reaction to what was done with TLJ.

All I remember is how Abrams and Kasdan went on and on about Snoke. Palpatine was never mentioned that I can remember.

All I know is that Palpatine being back completely destroys the prophecy of the Chosen One.

I remember douche Abrams (and Kasdan) saying in the run up to TFA that that would not be touched.

This was why Snoke was not a Sith Lord and neither was Kylo.

But all that seems out the window now.

Broom Kid said:
Bendemption is definitely happening. That was a foregone conclusion the second we found out Palpatine was back.

A leaked picture all but confirms this.

Broom Kid said:
But Reylo isn’t gonna happen. Not unless you so heavily dilute what Reylo is until it basically just means “Kylo is nice to Rey once and helps her.” But there’s nothing romantic happening between the two.

I guess they thought his throne was gigantic.

But if you saw the picture that Disney had taken down, you’d see that the proportions are normal.

Also, Palpatine is in robes that resemble more of what he wore in ROTS, not ROTJ.

Maybe I’m just wearing a helmet with my blast shield down, but where is his body at the 54 sec mark? I only see his throne.

Some people thought that was him standing to the right (see pic). 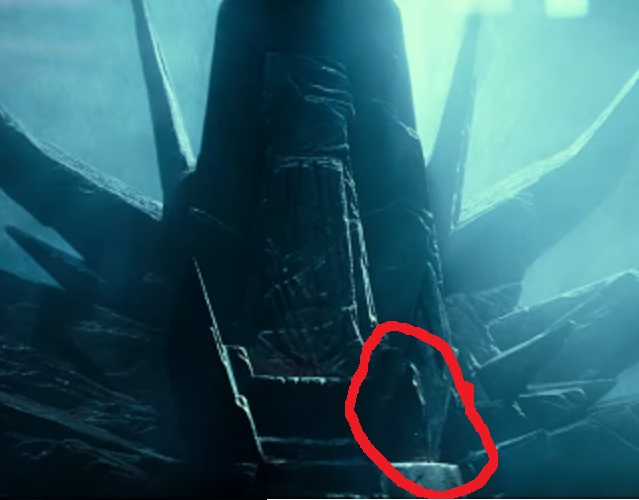 Looking at the trailer in 4K, I could see that there was nothing there.

It is just the throne/chair.

I wasn’t against Palpatine if it could be done in a way that well thought out/believable.

The way it appears to be raises much concern.

And the Rey aspect just makes it worse.

The way to do it was having Palpatine be a disembodied spirit trapped in some Sith artifact… or holocron.

Then you have Snoke or whomever working these past three decades to help free/release Palpatine and get him a body - either dark side Force rejuvenation or alternate body possession.

And you would still need to bring back Anakin in some capacity.

If not, then it is a total insult to Lucas and the Anakin Skywalker character.

I am kind of surprised about the Palpatine talk here.

Yes, he is back… and he somehow still has his physical body despite what happened in ROTJ.

This is one of the big reveals upsetting the fans right now. This and one other thing related to Palpatine.

Also, the spoiler rumor discussing how this could be states that it is either not explained in the film or the explanation is ambiguous at best.

But I don’t see how Palpatine being back can even be a question at this point as he clearly has his body in the trailer at the 54 second mark and the 1 minute; 58 second mark.

Abrams isn’t exactly hiding it. McDiarmid’s name is on the poster.

A picture that leaked on Thursday which Disney forced to be taken down really puts all the speculation to rest.

But is it in the same system as Endor? How far could that wreckage travel in three decades?

Remember, Endor is a gas giant. It has nine moons.

Some of the DS2 debris drifted to this moon which is supposedly near the forest moon.

It is called Kef Bir as ZkinandBonez said. It apparently has oceans.

Is this image confirmed as being The Ghost? 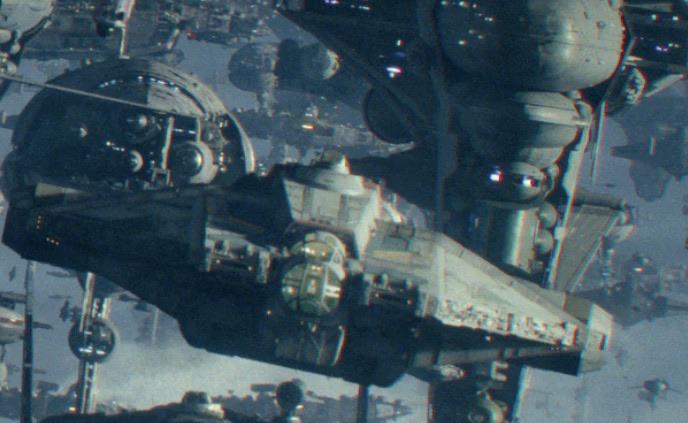 It’s Rey with the “MacGuffin”. 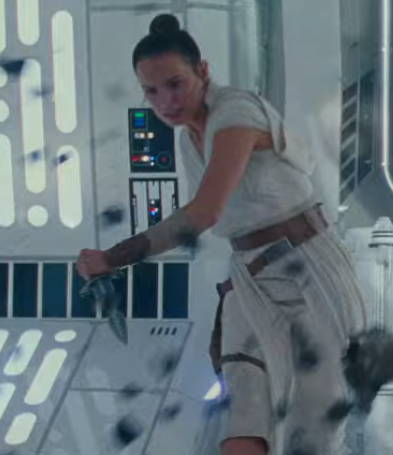 Ady was the first thing I thought of after seeing it.

It does appear that fan service is going to be big part of this film.

Without revealing any details, the character important to the C-3PO situation. 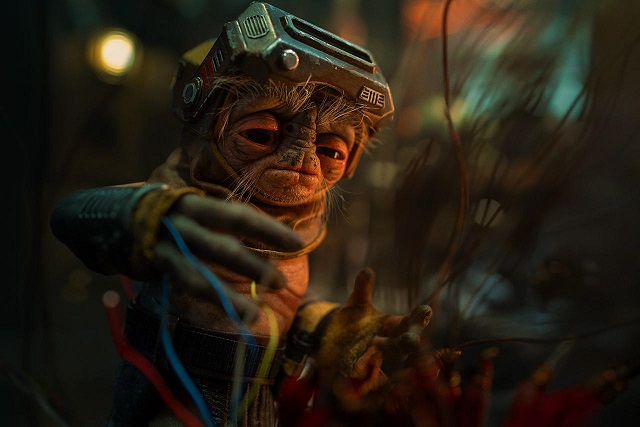 Prequel battle droid on the far right of screen during C3PO shot. 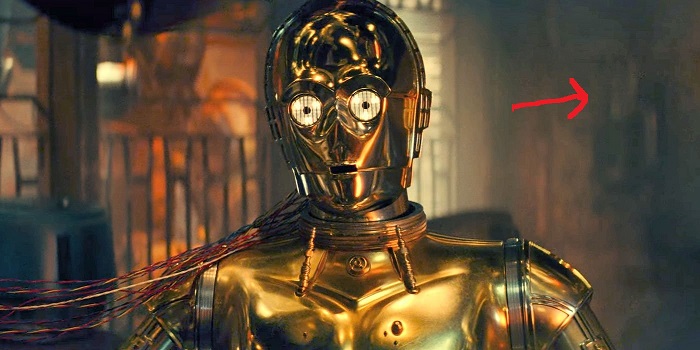 I’m guessing maybe Threepio is being reprogrammed (in a reverse of K-2SO in Rogue One) with the possible risk his old personality might not be restorable, hence the goodbye?

Do you want to know?

Is that a figure of Vader Rey and Kylo are smashing?

And I’m all verklempt now.

Yes. It’s the Vader mask from The Force Awakens perched on something.

Palpatine might not even be actually visible, just an empty hooded cloak moving around.

No, he is very visible.

And Ian’s name is on the poster.

Is that the Ghost to the right of the frame? It’s that or just a normal VCX100

And Han’s freighter from TFA, a U-Wing, the Shadow Caster, Nebulon Frigates, a Hammerhead Corvette, more.

Jason/MSW basically saying that Matt Smith is not in the film at all.

emanswfan said:
Was reading some pretty detailed leaks about the plot today and for better or worse this very much sounds like a JJ Abrams movie. I’m excited to see it on screen. Still haven’t seen much on the third act but it seems it won’t be long till that’s up online too.

emanswfan said:
If JJ can nail the feeling of TFA, respect what was built up in TLJ, and create a truly original plot than I think I’ll be pretty happy.

More stuff was acceptable from the Jason/MSW spoilers. I had many issues, but it was the better of the two.

Nothing against JediPaxis. He is doing those of us who want to know a solid. A good guy. And as they say, you don’t kill the messenger. But is it good?

And now MSW seems to be coming over and supporting more of the JediPaxis stuff. The only conclusion can be that his information, for better or worse, is more accurate.

I don’t know how to answer?

Is there a rumor that you heard that you may want to be true?

Oh I meant just vaguely. Like do you personally think this will be a really weird, or awful, or inventive, etc way to end this trilogy? Asking since apparently Abrams is wanting be less orthodox with this installment, even more so than Rian Johnson. Unless that’s just a rubbish rumor too.

Could be really weird. Some scenes/things going on are out there. I mean, right off the bat, there are two MacGuffins.
IMO, a lot of what is out there, if true, is not good. Despite claims of a lot of nostalgia, a couple of things could really anger OT fans.
Inventive? No. That’s not Abrams. He takes from others.

I don’t know how to answer?

Is there a rumor that you heard that you may want to be true?