I would love a link to the 1080p version! May I see it? I saw that you already sent some others.

I just uploaded V2 of this edit. V2 just fixes a few bugs with the crawl and a couple scenes throughout the movie. Nothing major, just touch-ups to fix the initial mistakes.

Since I now have V2’s of each edit, it might be a while before I go to V3’s and final releases of everything. I am personally waiting on other people to finish their edits to see if I am inspired by some of their ideas or scenes to add into mine. I am most looking forward to the Movies Remastered Episode 9 edit (release sometime Q 2/3 2021?), and the Fixing Disney Star Wars trilogy (releasing edits throughout 2021 and 2022). As those come out I will integrate what I feel works well with my Legends Trilogy and upload versions until I feel my work is 100% complete.

As far as future projects go, I don’t have any plans to release edits of any other Star Wars movies. I do have personal edits of Solo, Rogue One, Return of the Jedi, and small edits on some Clone Wars/Rebels episodes, but I don’t feel like my changes are significant enough to warrant writing about and releasing. They are just part of my personal way of watching the Star Wars saga. So until Disney releases something new I will only be slowly updating the Legends Trilogy.

Thanks to everyone who has supported the project and written reviews. I’ve really enjoyed the interactions and I hope my work will remain something for future fans to continue discovering so they can experience the ST in a new light.

Can I have a link to the workprint?

Is this an audiobook?

I would love a link to this! I sent an email but I have no idea if it was received.

“A family in balance. The light and the dark. Day with night. Destruction, replaced by creation… Too much light or dark would be the undoing of life as you understand it.” - The Father (Mortis) 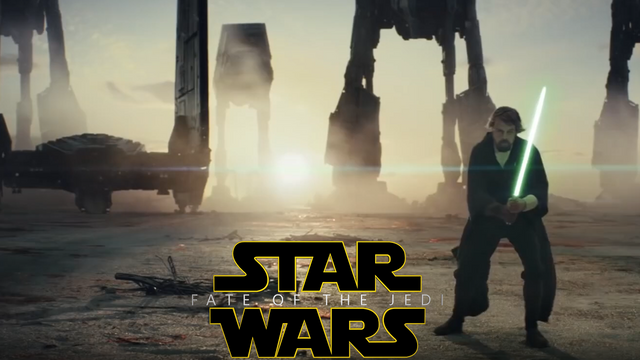 I am working on editing each movie in the Sequel Trilogy according to my understanding of what it would look like if it shared the themes from Star Wars Legends.

I’d love to have your feedback and suggestions as I create this, so please be open and offer criticism where you feel it is useful.

Goal of my TLJ edit:

Inspiration behind ST edits: Like many of you, I am a huge Star Wars Legends fan. I grew up reading everything I could get my hands on, comics, novels, short stories, playing the games etc. For me, transitioning into the Disney Era was tough at times. Most notably in the ST handling of the characters I loved. My favorite theme in Star Wars has always been the balance of the force and the failures and evolution of the Jedi. Initially, I had high hopes that Luke would surpass the failures of the Jedi doctrine and lead a new generation of balanced force users as the original Je’daii did. But alas, that was not the case… However, I think there is opportunity to tell the ST trilogy in a way that aligns better with the themes that Legends created. From Dawn of the Jedi to Tales of the Jedi through the KOTOR era, the PT and OT, there was a very clear theme of balance and what happens when either the Dark or Light tries to bend the force to their own narrow interpretation. I found the ST lacking in a clear reason for why it even existed in the Star Wars saga. I want viewers to leave my edit trilogy feeling like they now know something new about Star Wars, the force, and the OT trio.

What I want to fix in TLJ: I was pretty shell-shocked after experiencing TLJ for the first time. As the credits rolled, I had no idea what I was feeling. As soon as the film ended I turned around, bought another ticket, and immediately watched it again. After this second viewing it hit me… For the first time in my life I had just seen a Star Wars movie that I disliked. After spending so many years in Star Wars Legends there was just no way for me to like the new versions of the characters I had always adored. After putting a great amount of thought into this edit, I have come to the conclusion that this film can be transformed into a Legends story that I can love.

Here are the main areas I will be changing in my edit.

There is no ignorance, there is knowledge.
There is no fear, there is power.
I am the heart of the Force.
I am the revealing fire of light.
I am the mystery of darkness.
In balance with chaos and harmony,
Immortal in the Force.

The Je’daii were supposed to meditate on the dark and the light to find balance. “Observing the world around them, they saw two moons in the one sky—light Ashla and dark Bogan—and they understood the dual aspects to the Force, light and dark.” ― Ketu, Dawn of the Jedi. I adore this understanding of the force. The entire conflict between Jedi and Sith began because the sides split as one says light is better and one says dark is. Suddenly each side has flippantly created their own religion based on “a certain point of view” and the galaxy is constantly thrown into chaos by the force powers that be. That is a beautiful storyline with countless applications to our own lives and this world. Let me bring this all back to Luke… These things are what the Grand Master should eventually learn. Anakin, the Chosen One, brought balance to the force by leveling the playing field as he destroyed both Jedi and Sith. Luke didn’t have any understanding of these deeper concepts of balance in RotJ, but by the time TLJ rolls around it is the perfect scenario for him to know these things. He saw the failures of the Jedi religion first hand in Ben Solo, and knew something was wrong. Then he goes to find the original Je’daii temple which should’ve included those teachings above. This new understanding would ascend Luke to a level of power that no one had ever reached, and in my edit… it will.

I will be inspired by and using content from FGR’s Last of the Jedi and Anjohan’s edit, along with my own personal contributions from editing theatrical release. I also firmly believe that a Star Wars film must be at least 2 hours and anything less harms the movie. There must be a way to pace out the story to that length, even with the edits, or I will have failed.

FATE OF THE JEDI

Only General Leia Organa’s
band of RESISTANCE fighters
stand against the rising
tyranny. As the First
Order speeds towards the
rebel base, the brave heroes
mount a desperate escape.

Rey and Chewbacca race to find
Luke Skywalker, certain that
the Jedi Master will restore
a spark of hope to the fight…

If you have any ideas on how to make TLJ feel more like Star Wars Legends please post your suggestions below. I hope to make a beloved trilogy for those who didn’t enjoy parts of the ST, or even those who adored it, but want a new take on it.

May the force be with you all.

I sent you a request for the link. I would like all three if they’re not together please