Great preview ! Some shots are amazing. Some are less, but I think it is the way they were in 77.

I know you won't change your mind, but I think it could be nicer without the cigarette burns.

That said, it is the most amazing sample of SW77 I ever seen. So again, THANKS ! Can't wait for the complete and final version.

As stated previously, we are not doing a 50G version. Compress the example scene to get an idea of what the difference would make. Very minimal.

Secondly, for the 8 frames per reel, people can clean those as preferred.

Thanks again for all the relevant comments.

I can't wait until this comes out on HD-DVD guys! I'm so glad Blu-Ray was the losing format.

More seriously, I'm downloading the preview now and look forward to checking it out. Thanks for your work Team (if that is your real name)

Thanks again for all the relevant comments.

The sample Reel 3 is now available on Myspleen also for those that prefer torrents.

Welcome back, actual_negative1.  We missed you.

That's not him. The carriage returns

Will you guys ever consider creating a 50 gig/BD50 version? Because all that grain, lovely though it looks, must eat up a TON of space...

Me too! Very much so/

Welcome back, actual_negative1.  We missed you.

That's not him. The carriage returns

The stars flicker and fade in our original scans.

The stars flicker and fade in our original scans.

The recent preview looked great for the most part.

Here are 10 frames from the flyover.

2 different LPP's prints were spliced together for this scene.

No color correction, or cleanup was done on these samples.

Also, the sound is captured directly through the Dolby Digital decoder. (Again, not our machine, but similar to this) 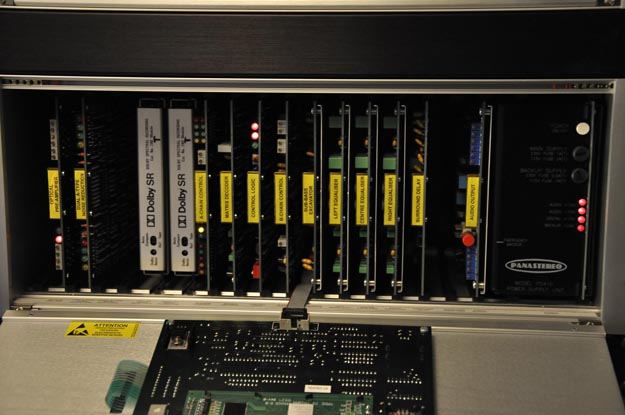 A  Panastereo csp1200, that picture is of the one at AFI silver theater.

Do you have a picture of the actual model in operation.

Did you use A-type cards with Star Wars as the cards in the CSP1200 are SR type.

Also its not a Dolby digital, its a clone like to the Dolby CP200.

We'll see about posting a picture of our sound decoder, and also get the information about which type of card was used.

Concerning the sound capture, from 'cinch'.

We have some new samples from Reel 2 that are moving towards completion. We will post them shortly.

Sounds great. Keep 'em comin' till I pass out!

Looking forward to seeing it.

Looking forward to seeing it.

There will be a screening in a few weeks of the entire Trilogy again. This will include the latest corrected footage for each one, and a hybrid version of Jedi with the best reels. More details will follow in the general forum once shown.