Need some help clearing up a rumor or possible false memory…

So everyone, of course now David Prowse has passed on (R.I.P.), and many of us heard about the infamous past situation of him being “banned” from official Star Wars conventions due to beef or bridges burned between him and Lucasfilm (or George Lucas personally).

I don’t care to back go into all that, but a friend of mine alleged it had gotten so bad at one point that the man’s name was actually removed from the Star Wars end credits!

Now I know for the longest time (until 1997) that the end credits for the original Star Wars didn’t credit James Earl Jones as the “voice of Darth Vader” and instead just referred to David Prowse as playing “Lord Darth Vader,” so could this be just a confused memory?

I’m so used to watching the original (GOUT or a restored edition) my own mind may be playing tricks on me. I was looking for my 2011 Blu-Rays (which I only bought, used, because of fan edits).

But Prowse appears in the Laserdic and VHS releases, just like the theatrical Special Edition.

So here would be the versions to check:

The 2020 4K version should be the same “cut” as the Maclunkey edition, so I expect it wouldn’t be changed, but on the streaming service, anything is possible. We’ve heard about Disney making digital alterations seemingly on the fly to various movies, often without any kind of fanfare until spotted by subscribers.

Empire Strikes Back had a re-release in theaters in 2020, but that was the only one of the classic films re-released that I recall (and I couldn’t tell you what cut it was, though probably the modern one, since I was wearing a slightly fogged up helmet at the time).

[I don’t have Disney+ and I don’t care to subscribe, so if anyone has it and can check, I’d be curious to know if he’s mentioned in the end credits!]

So the question is… was he ever actually removed, and if he was, was he reinstated (perhaps after his death)?

I’m guessing when certain actors have been replaced, they have gotten quietly removed from the credits (Jason Wingreen as the voice of Boba Fett, Sebastian Shaw as the face of Anakin Skywalker, Clive Revill as the voice of the Emperor), but maybe not in all cases. It seems like the 1997 SE credits remained in the 2004 edition, for example.

Anyway, any help is appreciated! I can check the 2011 blu-ray but that’s about it for me.

I just checked my 2011 Blu-Ray and David Prowse is credited in both the text as Darth Vader and in the audio descriptive track.

I would find it odd if he were in there and removed from any later version, as this “feud” has been going on for years.

David Prowse has never been left out of the credits. 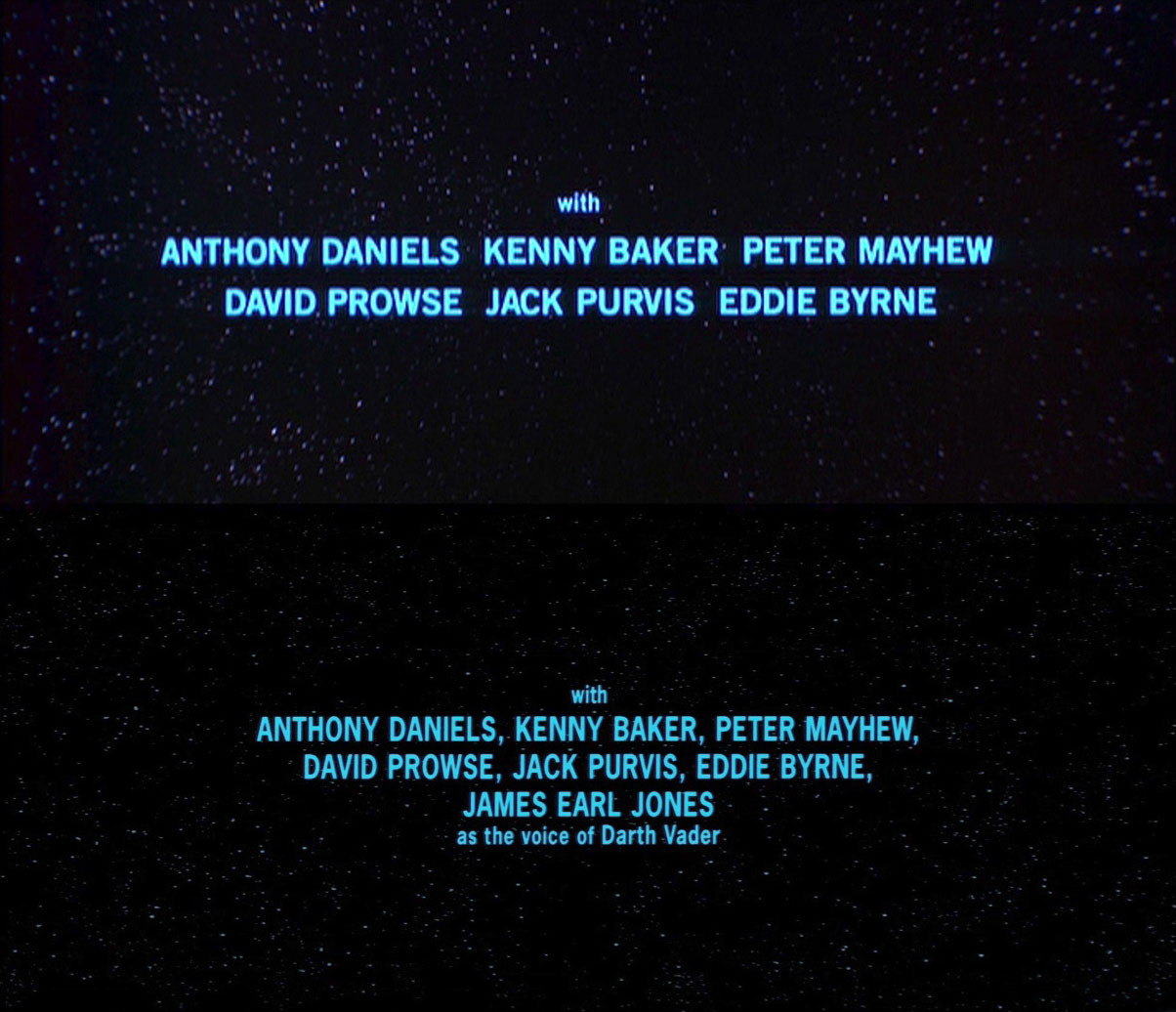 The only change to any credit near him was adding JEJ in 1997. The credits have not been touched since 1997; Jason Wingreen, Clive Revill, they’re all still credited. No one who worked on any version since then is credited.

Good to know! I appreciate somebody else checking this with me…

Which version is that above (the lower image), btw?

If the credits really are unchanged since 1997 (even on Disney+) that is as it should be, in my mind.

Good to know! I appreciate somebody else checking this with me…

Which version is that above (the lower image), btw?

If the credits really are unchanged since 1997 (even on Disney+) that is as it should be, in my mind.

So the credits have not changed across all these versions from 1997… ?

I don’t have Disney+, but if I were to fire it up now, I would see the 1997 Special Edition credits is what you are saying.

My friend will be glad to hear that, and I’m really happy to see this debunked. Thanks!

Yes, the 1997 Special Edition credits are the only credits now.

Yes, the 1997 Special Edition credits are the only credits now.

Is anything else in the credits different before 97?

Again, glad to know that the rumor I heard, was absolutely false.