Hello all! While this my first post here and hopefully i'll make more friends than foes, some people may know me from a few other sites (CLG wiki, Toms hardware as "Jim and Evil", Amazon). I mainly joined this site for the "Other Preservations" category, as some interesting restorations are a brewin'. I was going to post this there, but this topic is kinda OT and I want to have "good impressions" with some of the higher ups rather than being slammed by them.

Anyways, this thread is for listing Blu-rays with bad transfers in your collection or have viewed/rented. Lowest number being the worst while highest being the least evil of them all. This'll be fun, so lets hear 'em!

-Horrid 1080i transfer made from PAL master converted to NTSC WITH GHOSTING! The Fortune Star HK Blu-ray, while supposedly an upscale, looks ands sounds better by miles... and... miles (get the song reference).

-DNR'd, has wispy "lines" to amount up to an overall over-cleaned digital look like Disney's current fare of blandness. While other Disney BD titles such as Alice in Wonderland and Oliver and Company have similar treatment, TSITS is easily the worst of them.

-Heavy-handed DNR and has (faint) macroblocking... FOR AN H264 ENCODE!! Original 2007 BD with MPEG-2 encode smokes it in terms of picture quality (not just because it has the original grain intact).

-Check my amazon review for a detailed analysis

Surprises me it's currently going for $130 (last I saw), FOR SUCH A THIRD RATE

-Along with major sync issues (Clark having Lois' voice and vice versa), video quality is similar to...

http://www.blu-ray.com/movies/Gullivers-Travels-Blu-ray/3184/
-Ey yae yae yae yae!! Not only is it subject to DNR, but its culled from an old betacam master with colors bleeding like no tomorrow, cropped and stretched and manhandled to 1.75:1 along with a choppy frame rate. The production of this release has an interesting backstory of Koch Media staff defending the product with nonsensical babbling and even one of their employees bribing amazon

reviewers to give the product 5 stars for "something special", which alone is worthy of reading material. Luckily, the Thunderbean BD/DVD combo pack release (reviewed with it here: http://www.dvdbeaver.com/film2/DVDReviews44/gullivers_travels_blu-ray.htm ) is a vast improvement and a much more faithful transfer. Its sad that a smaller company like TB (run by a single animation preservationist out of most of his own pocket) can do much better work than an established Indie like Koch/E1.

All of your links are suck. 404 police are knocking on your door.

No need to be rude, links tested and fixed. Kept having 500 errors when posting the damn thing so something went wrong in copy pasting the links while trying to repost.

No need to be rude

I see. Guess there's really no rules here, except for posting of illegal downloads and SW spoilers; maybe a couple videos of Alexis Texas here and there ;)

Welcome to the forums, and to OT Off-Topic in particular, where trolls reign supreme. Seriously, having off-topic with no moderation whatsoever was a dumb idea.

Nobody sang The Bunny Song in years…

Having off-topic with no moderation whatsoever was a dumb idea.

Well, there is still (I think) moderation on SW spoilers and links to torrent sites even in off-topic. Yes, I've read all the rules before singing up and I want to make good impressions instead of pissing people off.

I do have to say though, some of the moronathons here (from the trolls and elbows) are LOL worthy!

I do have to say though, some of the moronathons here (from the trolls and elbows) are LOL worthy!

Someone finally finds me LOL worthy ... Someone finally finds me LOL worthy ...

And my favorites are the poster clowns that say "Can u hlp me fnd XYZ: the movie 4 fre? i can't afford 2 by it becauz I lazy and liek to fuk everyday and don have job my email iz (insert username here)@yourmail.net tnx"

Now that's comedy! Better than what's on Comedy Central nowadays or some of those obnoxious YT channels.

Anyways, lets get back on topic? (if that's possible)

Does anyone got any?

The original Spartacus release was a waxfest. All the detail was DNR'd away. Thankfully, they're releasing the new restoration performed by Robert Harris in October:

I've put my Blu-ray purchases on hold for the most part since 4K is imminent, but I might make an exception in this case to complete my Kubrick collection.

This Studio-Canal release of 'Escape from new york'...

Badly upscaled from the DVD, then DNR'd, then sharpened, so it actually looks much lower resolution than the DVD. Such a disaster that Amazon just gave me my money back without even asking me to bother returning the disc. By far and away the worst BR I've seen to date.

This is Shout-Factory disc is much better... 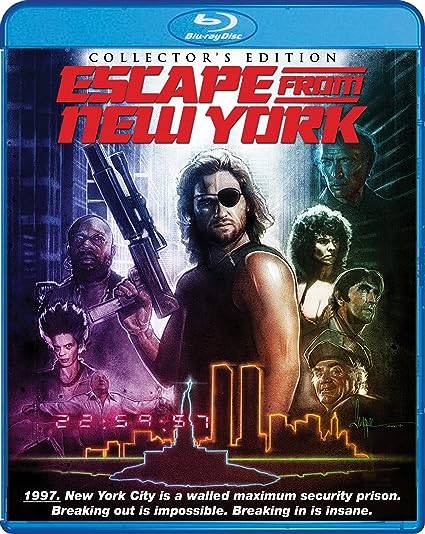 Yeah, the StudioCanal BD wasn't very good ether, but at least they didn't use an old 4th gen VHS master and scrub/crop it to hell like #1 on my list (http://www.dvdbeaver.com/film2/DVDReviews44/gullivers_travels_blu-ray.htm). Also, wasn't the SC/Optimum BD sourced from a unconverted PAL 576i master bumped to 1080p? (seemed more like number 6 on my list) I don't remember any ghosting, but I think that the audio pitch was higher than the NTSC masters. Even the U.S MGM BD, despite its problems, was at least from a true HD source and bearable (even if the studio digital master source was 1080i and deinterlaced/detelecined).

The new Sparticus BD looks promising. If they say its a new transfer, I really hope its true and Universal dosen't slap the old disc/transfer onto the combo pack.

This Studio-Canal release of 'Escape from new york'...

Badly upscaled from the DVD, then DNR'd, then sharpened, so it actually looks much lower resolution than the DVD. Such a disaster that Amazon just gave me my money back without even asking me to bother returning the disc. By far and away the worst BR I've seen to date.

Just looking at that atrocious cover convinces me its a shoddy release.

The first The French Connection release. Do any of these beat that? Now that's some bad work.

Yeah, the first French Connection release was stupefyingly bad, and in some really bizarre ways, too.  The noisy pastel look was just...strange.  The Filmmakers Signature Series release isn't perfect, but it's a massive improvement.

I have a particular distaste for how the early James Bond films look on Blu-ray.  There are many releases that are objectively worse, but Lowry just can't seem to help themselves.

Oh, and Robocop looks like shit.  The earlier Blu-ray had a nasty teal shift to it.  The most recent one fixes that...but still looks like shit.  Why bother with a 4K master and corrected color timing only to muck it up with a bunch of nasty processing?  Everything in motion strobes so much that it's still unwatchable.  It's sad that the best quality release of Robocop is still the Criterion DVD from the late 90's.

That’s impossible, even for a computer.

The first The French Connection release. Do any of these beat that? Now that's some bad work.

I wouldn't call that a bad "Transfer" per say, it was transferred exactly the way Friedkin wanted... like a blurry, distorted, scuzzy mess... that I wasted my money on (Grinds teeth). Thankfully he has since regained his sanity and done that more faithful "Signature" release. But the first bad release is the one you always find on sale in Europe. Same with Gladiator, the first bad release is the one you'll find in shops.

TFC would be categorized as a "Directors/Producers Revision" like the Criterion releases of The Last Emperor (2.00:1 hatchet job by the cinematographer).

However, another notable example of poor/DNR'd transfers would be the 2008 BD of Patton. Luckly, Fox (quietly with little fanfare) released a new transfer without the DNR pass applied, kinda like the June 2015 BD+digital copy release of Terminator 2. So it seems some studios ether are "trying" to get with it now with 4k BDs coming up, or they got someone different at the digital transfers department who decided not to apply any smearing filters to new BD pressings.

Here's hoping this new hog wild "30th-Anniversary-Special-Ultimate-Collectors-Premere-Limited to 1985 copies" edition of the BBTF trilogy will have transfers of the films without the DNR and processing passes, but who knows. Regardless, BTTF: The Animated Series, may make this more worth getting since (despite its wonky drawings and such) it hasn't seen the light of day at all outside of TV airings and VHS bootlegs.

The Killer, TFC, Patton, Spartacus, the cheap studios sourcing titles from pitiful sources...these are all the usual suspects.

It goes without saying that I despise the SW discs..but hey don't we all?

But add in every single Disney release. What they are doing is destroying their legacy...and people just let them get away with it.

The cheap studios sourcing titles from pitiful sources...these are all the usual suspects.

Yeah, those are MUCH worse than Spartacus, EFNY, and others from the major players. IMO (and I know others would agree), #1 on my list is the worst BD release to walk the face of the earth!! Trust me, I at one time rented that horrid mess from a public library to see if truly it was the "Worst Blu-ray of all time" like reviewers were saying. And yes, YOU BETCHA!! Makes Predator and Spartacus look like pristine transfers in comparison to that abomination.

Found another one... The new Shout! Factory DVD and BD of The Last Unicorn. Not only is it DNR'd with leftover floating grain in some background shots, but knowing Shout's mediocre encoding, it suffers from macroblocking and mosquito noise... FOR 1080p! Previous Lionsgate BD was the best its ever looked (aside from their 25th Ann DVD which was a PAL-NTSC botch job).

I pretty much stopped buying blu-rays when The Big Lebowski got waxed over and the OT was SE-only (and further desecrated, at that!).

AFAIC, the studios killed the format by compulsively "improving" movies in the transfer process, rather than simply creating HD transfers.  When I think about my excitement about the blu-ray format when it was introduced, I weep at the tragically squandered promise.

Criterion had some bad transfers before:

Children Of Paradise and Earrings of Madame De... (DNR from French masters)

Dressed To Kill (image is squeezed or stretched)

I got so upset on that last Blu-ray transfer on the Blu-ray.com forum that they thought I was trolling instead of venting and I got suspended for a week.

I got so upset on that last Blu-ray transfer on the Blu-ray.com forum that they thought I was trolling instead of venting and I got suspended for a week.

-Along with major sync issues (Clark having Lois' voice and vice versa), video quality is similar to...

They've got the complete set on the Superman I-IV blu-ray set. Any idea if they're the same transfers/masters?