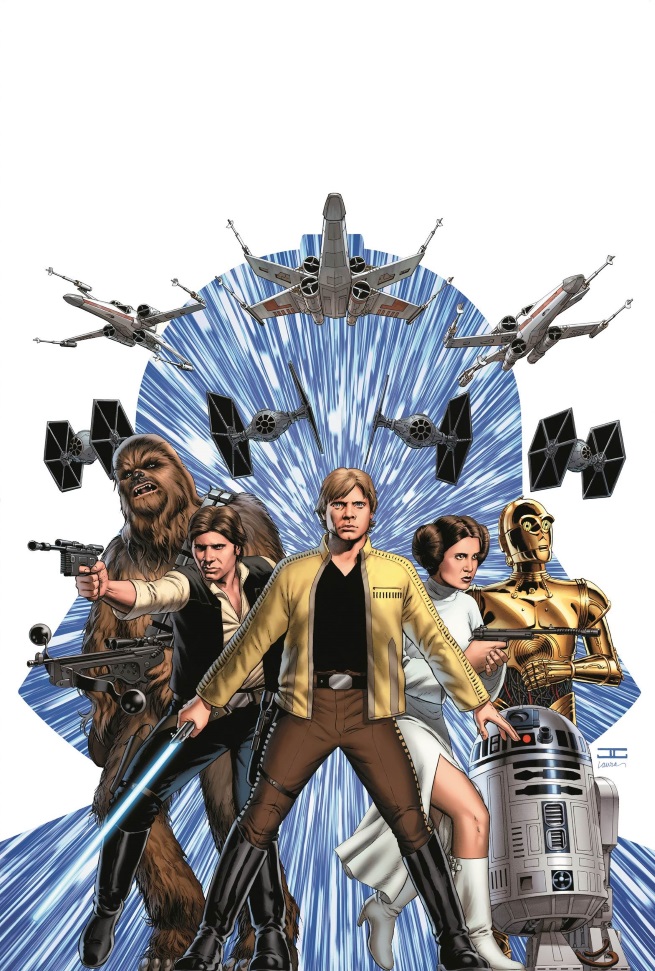 Yellow jacket Luke! Art by JOHN CASSADAY! They have my money!

PRINCESS LEIA!! By MARK WAID!!! I need another job, because they have my money again!

I'm definitely not a fan of whoever drew the Princess Leia cover. Didn't capture her likeness at all.

I've never liked much of the modern Marvel art that I've seen compared to Dark Horse. I guess the writing will be the determining factor for me. 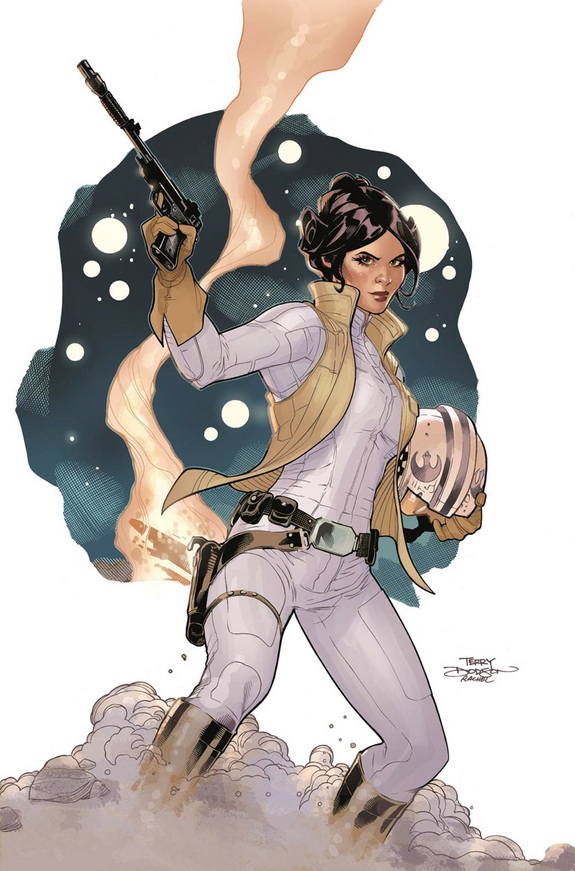 Also, if that helmet is any indication they're also keeping that stupid idea that Leia is a fighter pilot from the current ongoing Star Wars title from Dark Horse.

I do have to wonder what the hell is up with her 'do, though; it looks like she has roses growing out of the sides of her head.

FWIW, Leia as a fighter pilot started way back with Splinter of a Mind's Eye (the novel), did it not? Doesn't she pilot a Y-wing at some point in that book?

Personally I'm not a fan of Leia being a pilot either, but I've never cared for how in the EU it seems anyone and everyone can fly a ship... That's certainly not the way things were in '77. "Whose gonna fly it kid? YOU?!"

^I don't think Leia engaged any enemies when piloting the Y-Wing, though. Her being able to pilot a fighter doesn't necessary mean she was also capable of engaging other fighters in a dogfight.

How everything was executed in that lameass series

Then again, the EU was already dead to me by that point.

I guess I should mention that I never actually completely read the series beyond the first tedious, unengaging, decompressed storyline. I did skim through the succeeding issues, though, and seeing Vader as a raving lightsaber-swinging lunatic killed all interest I had for the series.

Oh, I didn't like how Brian Wood said this

My plan is to pretend that nothing else exists other than ‘A New Hope,’ at least in the minds of the characters,

only to identify Vader as Anakin and throw allusions to the PT into the books anyway. I went into this series specifically to explore a modern take on a SW '77-only universe and only got more of the same I'd already seen in various other series' and mini-series' published by Dark Horse in the past.

The comics did have some awesome cover art, though; at least it succeeded in that regard.

I'm so glad that they're avoiding that "eras" crap that plagued the Legends EU. All that Legacy and Old Republic stuff were the worst things to ever happen to Star Wars besides the non-release of the OOT.

Oh, I didn't like how Brian Wood said this

My plan is to pretend that nothing else exists other than ‘A New Hope,’ at least in the minds of the characters,

only to identify Vader as Anakin and throw allusions to the PT into the books anyway.

Key part being "at least in the minds of the characters", I think.

Well, in that case, what sets this series apart from any other series, then? I'm sure TESB, ROTJ, and the post-ROTJ EU didn't exist "in the minds of the characters" in the other series'/mini-series' taking place between SW & TESB, either.

I'm definitely not a fan of whoever drew the Princess Leia cover. Didn't capture her likeness at all.

I've never liked much of the modern Marvel art that I've seen compared to Dark Horse. I guess the writing will be the determining factor for me.

Also, if that helmet is any indication they're also keeping that stupid idea that Leia is a fighter pilot from the current ongoing Star Wars title from Dark Horse.

That looks more like Eileen Brennan than Carrie Fisher.

One of the greater fears I've had about the Star Wars comics license reverting to Marvel was than the artists would make Leia -- and every other main female SW character, for that matter -- an anorexic with silicone tits. If this picture's anything to go by, then that isn't happening, which is a definate godsend.

One of the greater fears I've had about the Star Wars comics license reverting to Marvel was than the artists would make Leia -- and every other main female SW character, for that matter -- an anorexic with silicone tits. If this picture's anything to go by, then that isn't happening, which is a definate godsend.

I agree, but  too bad that doesn't look anything like Carrie Fisher.

Eh, I'm not that concerned about the likenesses of the characters being 110% true-to-life -- hell, my favourite drawn depiction of Leia is Carmine Infantino's from the original Marvel comics, and he never drew her looking anything like Carrie Fisher.  As long as the basic features and attributes are captured, I'm happy.

Yeah it never really works when they try to draw perfect actor likenesses in comics, it usually looks creepy. Better to have a stylized comic-booky equivalent. Also, Leia flew a fighter in the old Marvels (and it's also implied in JEDI, her Y-Wing is in the sandstorm scene.)

I'm looking forward to the Vader comic. I want to learn about Vader's Stormtrooper legion and the crew of the Star Destroyer from the opening scene of ANH.

I can drive a car but that don't mean I can compete in a Formula One race....

In Splinter she has a thorough understanding of her ship and how to pilot it. No mention of combat flying.  In Star Wars77 and Splinter it shows her as someone who is generally collected under pressure*, so seeing her as a fighter pilot isn't really a stretch.

That hits close to home for me because I know of a woman who also has to maintain that same strict composure under incredible pressure and responsibility.  I've been privy to some of those breakdowns when she's safely away from the source.  That passage in the novel is an excellent representation of what some people have to endure and how they rise to the challenge.

Well the writers certainly have me intrigued:

Marvel.com: Jason, of all your past and current Marvel work, what do you feel will most inform your writing of STAR WARS?

Jason Aaron: This is clearly different than anything I’ve done for Marvel. And what most informs it is of course the films. I want this to feel very much like a direct sequel to the original Star Wars film; in terms of tone and voice and scope and everything.

Marvel.com: What sorts of themes do you see yourself exploring in the series? Is Star Wars about the characters or much larger things to you?

Jason Aaron: Every story is about the characters, and we’ll focus on all the old favorites. There will be big moments for everyone, from Han Solo to R2-D2. But a major part of the narrative will be driven by Luke Skywalker and his journey of discovery, a journey that will decide the fate of the entire galaxy.

Marvel.com: Okay, Jason; let’s bring it on home: If you had your druthers, what one element from Marvel’s past Star Wars stories would you bring back?

Marvel.com: Okay, then what’s your philosophy in writing a series that follows a fairly heinous villain? How do you engage the readers?

Kieron Gillen: Put it like this: who doesn’t love “The Godfather”?

My model for the series is “House of Cards.” A man in a position of power who is slighted and turns to tactics that he wouldn't have really considered before. In terms of engagement with the readers, it really helps that we're set in the period between “A New Hope” and “The Empire Strikes Back.” That’s an emotionally interesting place for Vader, and I suspect many people will empathize—if somewhat darkly—with his position.

Marvel.com: What else can you say about Vader at this point in the saga, just after “A New Hope”? Where’s his head and heart?

Kieron Gillen: Vader’s the sole survivor of the greatest military disaster in history—and a disaster that he definitely had a hand in by letting the rebels escape with the plans for the Death Star. This is not a thing which leaves you in anybody’s good books, let alone the Emperor’s. But along with that, there’s these nagging sensations. Why did Obi Wan return from hiding after all these years? What about that nagging sensation about that fighter pilot who was suspiciously strong in the Force? What else is going on?

The great thing about this period is what we don’t see on the screen. Vader learns who Luke Skywalker is at some point between the two movies, to choose but one example. There is a lot of genuine emotional meat on the bone.

Marvel.com: What will be his greatest personal challenge after the rebel’s victory? His boss? His subordinates? His enemies?

Kieron Gillen: Recovering his status. At the end of “A New Hope,” we see the aforementioned disaster. At the start of “Empire,” he's acting as if he’s more in control than he ever was in the first film. The journey between the two—what happened? That’s the challenge. And that challenge involves everything you listed, and a whole lot more.

Marvel.com: Your story tackles the aftermath of Alderaan’s destruction for one; in what ways does this impact Leia the most? She seems to compartmentalize it in the first film; how will it manifest in your series?

Mark Waid: She very much compartmentalizes it in “A New Hope,” but that's our springboard: how does she really cope with losing her entire world once the events around that loss have calmed down somewhat? Does she choose to be the princess of nothing—or does she set out to rebuild her heritage and her civilization? You can probably guess the answer.

I like the sound of those interviews. I feel like the latest Star Wars series was a step in the right direction, and these seems like great continuations of that new direction.

Here's a preview for the new Marvel Star Wars ongoing.

Gotta say, pretty disappointed with the recycling of things that have been done before. One even being a PT thing. Let's try and be more original, eh?

And then there's the design of that ship. How is that supposed to work, where is the cockpit supposed to fit in? And why are the ships only thrusters fixed in a downward position? The shape of it would surely prevent them being able to rotate. And that's not even bringing into account the lazy recycled aesthetic of the thing as a whole.

What I'm looking forward to is finally seeing Vader aquire his ESB rank and learning about the Imperial offiecers in the opening scene of ANH.

^^Colour me fairly unimpressed. Nothing about those pages catches my interest in the least; the art's competent but not engaging, and the content just looks ... meh.

Now give me a Star Wars comic pencilled by George Perez and inked by Karl Kesel -- that I'd eat up in a heartbeat.

What happened to Chewie's face??