It’s closer to 2.5x budget, and even then that’s maybe outdated at this point. But 2.5x is the rule-of-thumb now. I think it has something to do with studios aiming for large international numbers despite the fact international money usually only returns somewhere between 20-25% of a ticket, where domestic is 50% of a ticket.

Update: That 75-77 estimate might be way low. Looks like Saturday is looking to drop to the 21-22 range. If Sunday follows the standard 10% drop from Saturdays, That’d put it around 68mil for the weekend. Saturday dropping from Friday is the first real piece of un-spinnably BAD news this movie’s had. Movies (especially super-popular ones) aren’t supposed to decline day-to-day over the weekend.

It’s very likely Rise of Skywalker will permanently fall behind The Last Jedi’s pace either Wednesday or Thursday, and if the drops maintain this pace, not only will $1bil worldwide be in jeopardy, but breaking $500mil will also. In good news - it’s looking like of all the contestants, Rocknroll41 has the best shot at hitting the trifecta.

Back again! Apparently, Saturday dropped from Friday down to 25 million. I optimistically say this will do 70M for the weekend; although, I wouldn’t be surprised if it drops farther than that.

$725 million WW now, apparently. Sounds pretty good to me! As long as it gets to a billion I think I’d consider it a success, from a personal standpoint.

A movie making a billion is still a very big deal, no doubt, and Rise of Skywalker is likely going to start making a profit (I should put quotes around it considering how Hollywood accounting tends to work) very soon, but it’s all about those certain points of view.

Making Rogue One money domestically (between 510-540) and settling around the 1bil mark (970-1.05) worldwide is a huge haul for 2019’s box office. That domestic would put Rise of Skywalker at #3 for the year, behind Avengers: Endgame (The #1 film of all time) and The Lion King remake. That’s a success by most metrics.

It’s only when you acknowledge that the final episode of the sequel trilogy will fall about $100 mil short of its predecessor (never before happened in Star Wars history), and might end up making just barely more worldwide than the first episode did DOMESTICALLY (and that worldwide number might only be good for #9 on the 2019 ww list, under JOKER) that you start to get a sense of how much goodwill got eroded by this movie. No matter what happens from this point forward, this film is going to be the worst reviewed film in the ST, and the lowest-earning as well.

$725 million WW now, apparently. Sounds pretty good to me! As long as it gets to a billion I think I’d consider it a success, from a personal standpoint.

It just entered the 2019 top ten, so I suspect it’s only going to move up from there.

Here’s the data in figure form: 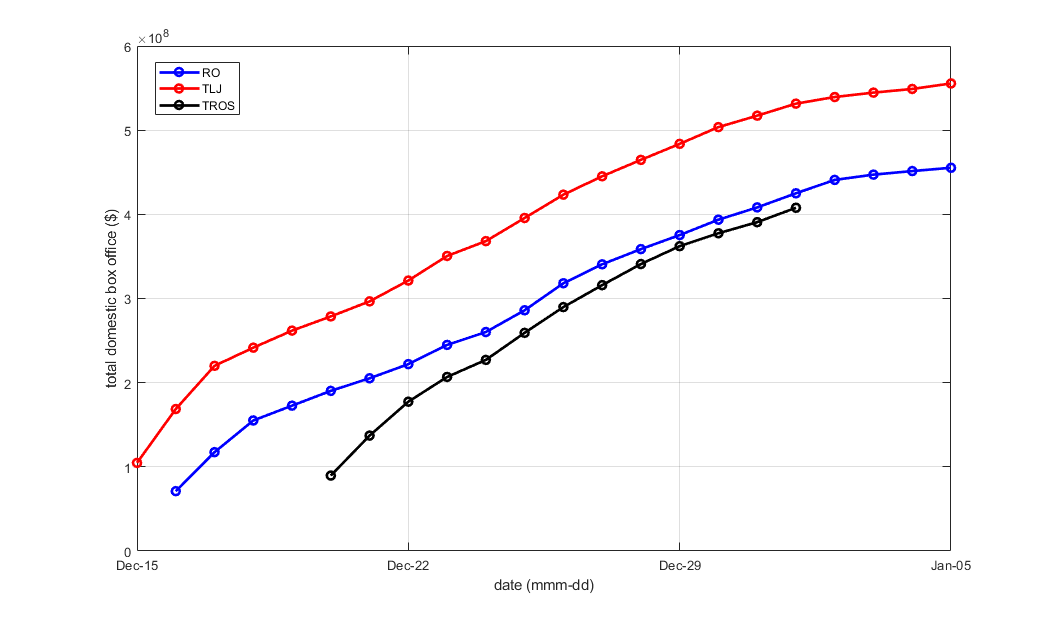 Including the dates is actually very useful, because this figure clearly indicates, that unlike popular opinion, it is not unlikely TROS will fall behind RO for its total BO, and may not even pass the $1,000,000,000 mark.

People are too focussed on the number of days. All the films have shown a large drop off following the holiday period starting from Jan 3-4, and I don’t see why TROS will be the exception. Since Christmas it has been closely following the trajectory of RO, and TLJ, except at a lower level. There is no indication in the data, that the curve for TROS will cross the RO curve. If it doesn’t cross the RO curve, it will stay below it, meaning it will make less than 1.05 billion.

Apologies for stepping on any toes. I’ll forgo adding any statistical updates to the thread.

Apologies for stepping on any toes. I’ll forgo adding any statistical updates to the thread.

No toes have been stepped on my friend. 😉 It’s all just speculation…

I also misinterpreted your post, so sorry about that. No offense meant.

All those millions. I wish one or two would find their way into my account.

$919 million now. So I’m guessing the movie will close in on a billion within the next few days.

$919 million now. So I’m guessing the movie will close in on a billion within the next few days.

The Rise of Skywaker is already #3 for 2019. Can it get to #2? China is such a huge part of the worldwide box office, and Star Wars isn’t popular there at all, it probably wont get very high on the worldwide list at all. The Force Awakens had a large worldwide total but that was thanks to its enormous domestic take where it is still #1 all time over Endgame.

No doubt about it, The Rise of Skywalker definitely made less than I thought it would. After I saw it, I knew some wouldn’t like it, but I still thought it would do better than it did. Not that it’s the disaster some are making it out to be. Did they want more? Of course. They want to make Endgame numbers every time, that’s always the goal. I’m sure they are happy owning the majority of the top movies of 2019.

I think it is going to pass the 1 billion mark. My guess is next Sunday or sometime during the following week. And it is still playing on a lot of screens and hasn’t hit the second run theaters yet. So there is potential for it climb a couple of notches higher for the 2019 worldwide box office.

I think it is going to pass the 1 billion mark. My guess is next Sunday or sometime during the following week. And it is still playing on a lot of screens and hasn’t hit the second run theaters yet. So there is potential for it climb a couple of notches higher for the 2019 worldwide box office.

That’s not what the data indicates. All films have shown the same very consistent pattern in January, namely a half time of about a week, meaning each week will bring in about half the BO of last week. If it hits 1 billion, it will likely do so in about two weeks at the earliest, more likely near the end of its run, although the scenario, that it just misses the 1 billion mark is also still on the table. Jan 6 and the days thereafter will very likely show a dramatic drop in BO revenue, since it is the end of the holiday period for most people around the globe with kids going back to school. It will then likely pick up a bit for the weekend, but like I said, it is unlikely it will do much more than half of last weekend.

Here is a figure with the domestic numbers for TROS, compared to RO and TLJ up till Jan 31: 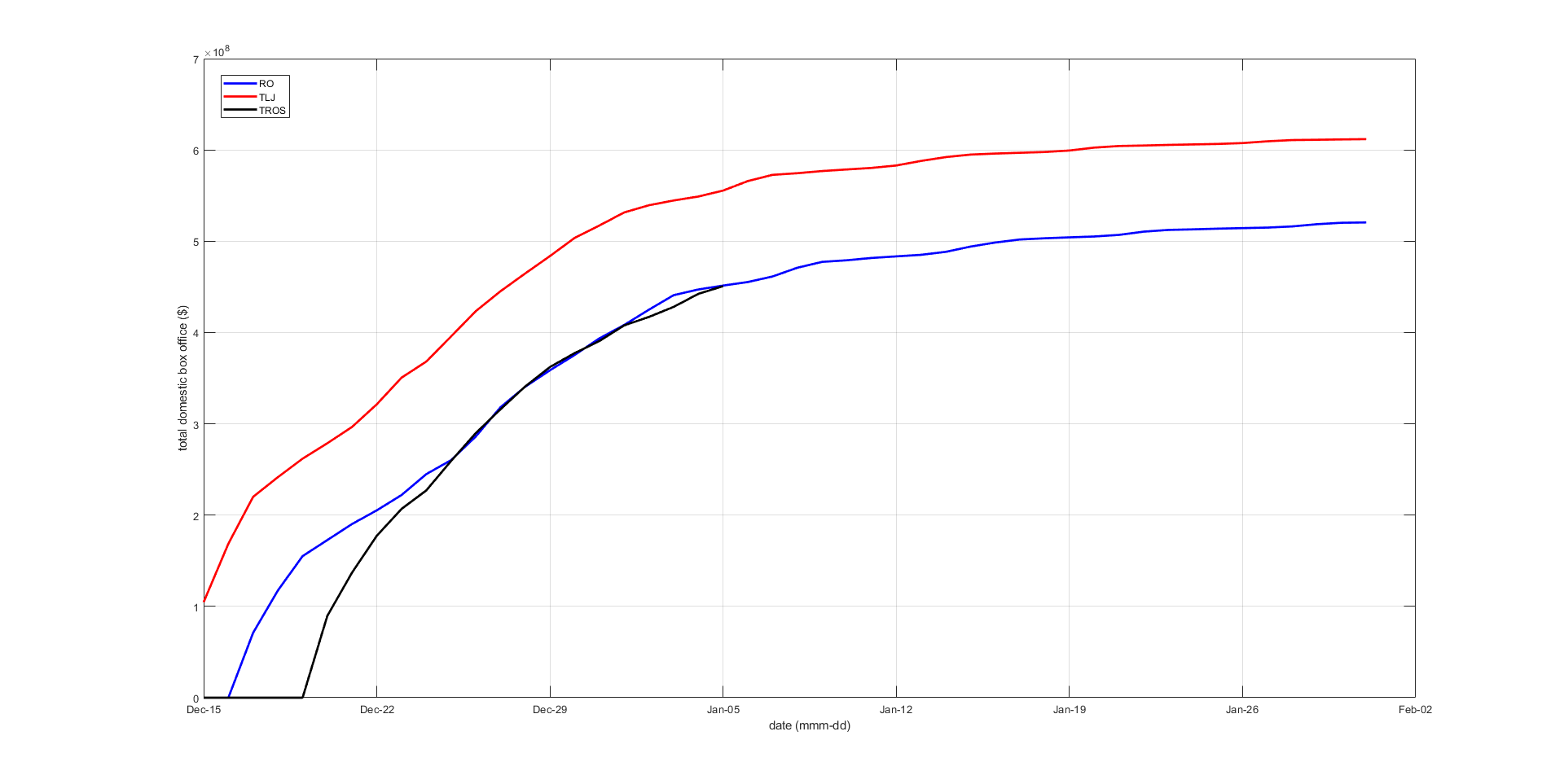 The biggest uncertainty is, whether it will overtake the BO of RO in the end, as it is just below RO at this point, but its BO decline is faster for TROS than for RO, so there’s a good chance, it won’t. However, ever since Christmas TROS has been following the trajectory of RO extremely closely, so if it beats RO, it will almost certainly do so by a very small margin. Taking into account the budget, and marketing cost, TROS will likely be the least profitable of all the films except for Solo.