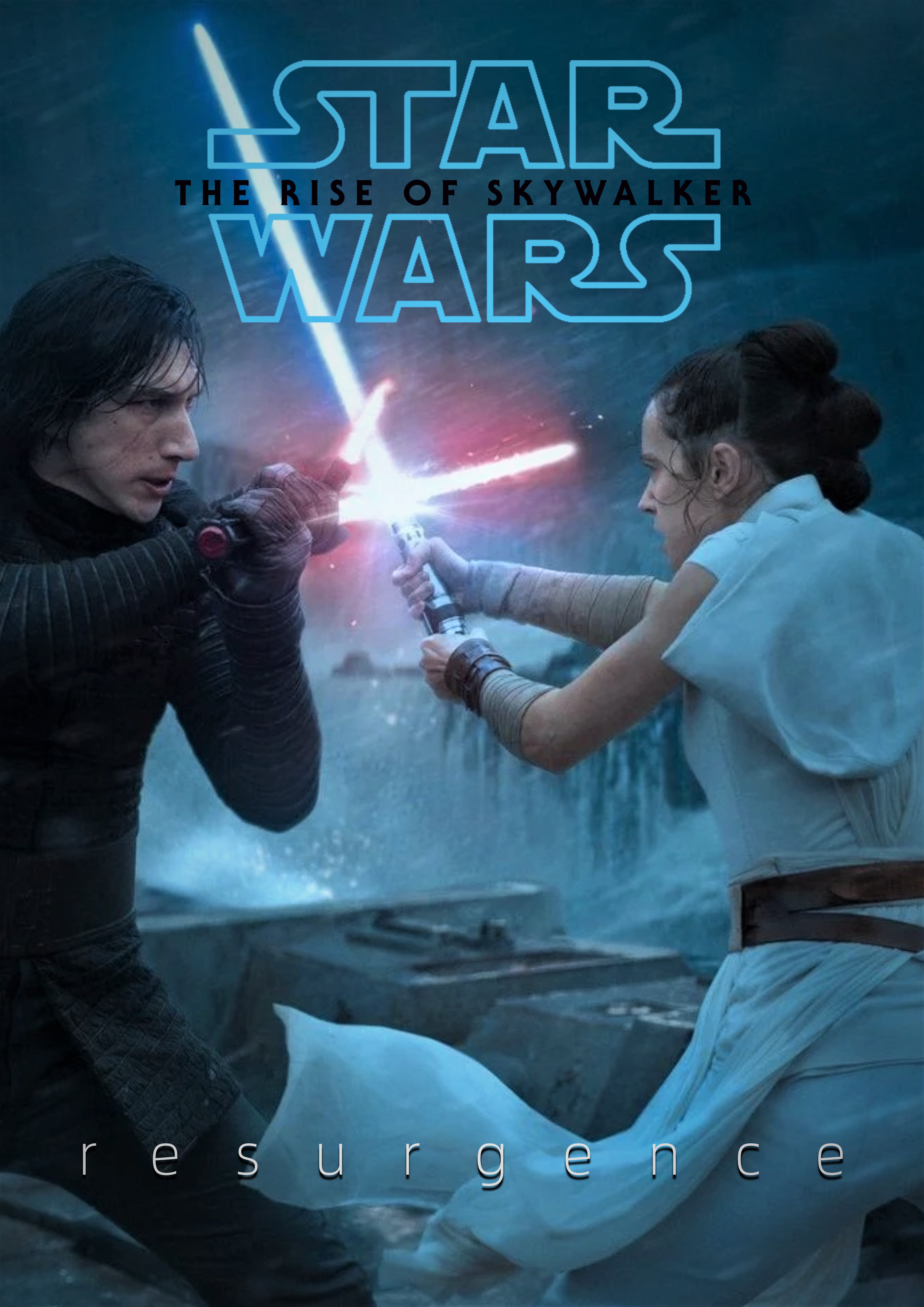 The Rise of Skywalker: Resurgence

A restructured “Rey Nobody” edit of The Rise of Skywalker to move the reveal of the Emperor to later in the film.

Complete restructure to move the Emperor reveal to later
Ren is so tormented by visions of his father that he destroys Corellia, planet destruction moved to the beginning
Finn is more serious, less sassy
Jannah’s presence reduced
No Klaud
Ben lives
Rey-TIE Fighter showdown is more like the trailer
Force ghosts vfx by jonh
Palpatine clones, Imperial shuttle, Falcon ending shot vfx by poppasketti
Rey’s parents were nobody
Rey killed her parents (idea by idir_hh)

November 18, 2021 ver 3.0
Audio transition corrections, volume levels, center channel fill, and SFX work for seamless, professional level sound.
Improved night Ach-to regrade again.
Removed Luke’s V.O. during Rey’s vision with the cave serpent and replaced it with Kylo Ren‘s voice.
Added shot of dark side Rey to the vision with the cave serpent.** (thanks Dominic Cobb)
Added Vader’s castle into the Mustafar sequence from the Ascendant project. I fiddled around with the existing audio so it’s passable for now.**
Changed and simplified the new Ren dialogue for the big reveal scene to remove the wonky, robotic dialogue!
Zoomed in a bit on old-school Obi-Wan so that his shot is similar to the other force ghosts.

** a double asterisk above denotes: kindly shared by HAL 9000. Many others also contribute to the talented work that HAL 9000 shares.

Oct 6, 2020 ver 2.3
*Improved audio levels for Knights of Ren voices
*Removed Finn’s loud grunting during lightspeed skipping
*Finn yells “Rey” one less time somewhere in the movie (does it matter where?)
*On Pasaana, stormtroopers no longer sound like slapstick droids when they die, including the one with the exploding jetpack
*Removed Poe saying “we only have 8 hours left”
*Improved Ach-to night regrade
*Darkened the flashback of young Luke and Leia, reduced/obscured footage of young CG Leia’s face
*When Luke raises the X-Wing, the sky is now blue instead of gray/overcast
*Removed some of the narration as the Resistance preps for the final battle
*Removed Poe exclaiming during the battle of Exegol, “they’re toast!”
*When Rey looks to the suns, extended the shot of BB-8
*Improved reverb sfx and audio level of Yoda’s voice during lightsaber burial

August 24, 2020: ver 2.1
released with vastly improved video render from prores, no artifacts, with 5.1 channel audio and removal of brief but noticeable slow motion from 2 scenes: the force duel between Rey and Ren and the BB8 with suns. Filesize 10.4 GB.

PM me for link; by requesting a link you agree you own the HD version of The Rise of Skywalker, The Last Jedi, Solo: A Star Wars Story, and The Force Awakens. This edit uses audio and/or video from these films.

Thanks to Axlanian for processing the vocals for the Knights of Ren and also thanks to him, his wife, Mr. Benjamino, and poppasketti for voicing the KoR.

All who dared to speak the name Luke Skywalker are silent, slaughtered by the merciless KNIGHTS OF REN. Yet whispers of the fallen Jedi Master still echo across the galaxy.

Sensing a sinister presence, General Leia Organa sent many spies deep into the UNKNOWN REGIONS, but none were ever heard from again.

Changelist (scenes have been drastically reordered in the first act; changes are in relative order of edited chronology: I like how you’re cutting the “sassiness” from Finn, it fealt really out of place for me.

I kinda liked that part tbh but I can see why you would cut it.

Nice edits, looking forward to this.

Having Kylo Ren destroy the planet (now repurposed as Corellia) at the beginning to “let the past die” will be challenging but possible. It will require moving the First Order’s use of the superweapon to the very beginning. The result of the First Order board meeting (where Kylo forces the guy onto the ceiling) would then be to destroy Corellia. The tough part is it’s definitely going to require some dialogue changes.

I considered cutting use of the superweapon altogether since it was so unnecessary. But now making it Kylo trying to destroy his own demons gives it a real dramatic purpose and makes him even darker.

Thanks for your feedback and please keep it coming as we go.

krausfadr said:
5. Cut Klaud (the tree monster alien) from the Falcon and from existence.

As someone who hates the new “design” work on the ships and the aliens, I think Klaud is great and should not be cut. He is a joke, sure, but a funny one, and used sparingly enough to not be annoying.

Same with Billie Lourd. (This is a straw-man argument, dude)

Billie should stay because to me she’s royalty (and provides continuity). Klaud isn’t so funny since he’s really a repackaged Porg. I was fine with the Porgs in poppasketti’s version of TLJ (the best version of TLJ imo). But Klaud is too distracting much like the monkey elf who welds things…

Billie should stay because to me she’s royalty (and provides continuity). Klaud isn’t so funny since he’s really a repackaged Porg. I was fine with the Porg’s in poppasketti’s version of TLJ (the best version of TLJ imo). But Klaud is too distracting much like the monkey elf who welds things…

I was just pointing out a counter argument. But yeah, Billie Lourd’s character can stay.¯_(ツ)_/¯

Sounds splendid, i cant wait to see what the final result will be like.

How was I to know your kind can’t eat sweetweed?

Maybe a porg on the Falcon from TLJ grew up into Klaud.

Ha ha! So that’s what porgs become. We should keep Klaud then and have him be the minister at Finn and Poe’s wedding. To give JJ the ending he wanted.

The Knights of Ren have brutally executed every insurrectionist who dared speak the name Luke Skywalker. Yet whispers of the Jedi Master still echo through every system.

General Leia Organa, sensing a sinister force beyond the OUTER RIM, dispatches spies of THE RESISTANCE only to discover the First Order has acquired a powerful new weapon.

I like your change ideas, definitely helps follow up Kylo’s trajectory after The Last Jedi. However, I think this new dialogue exchange needs work. It sounds a little clunky like the prequels in my opinion. I look forward to seeing the final product. Let me know if I may be able to help. May the force be with you!

Hey there Darth Sadifous. The dialogue should be improved. If you have any specific ideas please share. Here’s a possible fix (note I’m removing all dialogue about Palpatine from Poe’s intel briefing scene):

Boolio: Someone has been hiding in the Unknown Regions.

Boolio: Don’t know. The First Order is searching for a planet there.

Finn: How do we thank you?

Quite interesting, looking forward to checking it out

Edit has begun see change list above in the main description.

Very cool edits, can’t wait to see what this looks like

Rey does not heal the serpent, instead it senses her powerful dark side and leaves.
Here’s the edited scene. UPDATE: THIS WAS A VERY ROUGH DRAFT AND HAS ALREADY BEEN GREATLY REFINED
https://youtu.be/cwelxm-udvU

Just over halfway done with the edit, not including creating a few lines of new dialogue. I managed to completely rearrange the first act and delay the Emperor reveal on Exegol until 35-40 min into the film, and also used footage from the trailer to improve the Pasaana Tie Fighter vs Rey showdown. Updated, detailed changelist is above in main description.

Could you share a clip of your Rey vs. TIE scene? I’m using trailer shots too, I’m curious how you’re going about it.

Dom I will export that edited scene “shortly.” I really just used two alternate scenes from the Trailer:

#1 One far shot just after Rey withdraws her lightsaber.
#2 The shot of Rey’s hand holding the UN-IGNITED lightsaber as the Tie Fighter bears down in the distance, coming clearly into focus

I didn’t use the extended camera side sweep across the desert sand because it felt like too much, and I didn’t use any music from the trailer.

Other changes to make it more like the trailer were made by just editing the film footage.

Here’s the clip of Rey vs. Tie Fighter (it still needs additional lumetri correction because the trailer had saturation boosted waaaaay up).

Nicely done, although color seems to be washed out in general in your clip.