Wow. I have to show it to a certain person in a certain shop, who was arguing with me that no such thing exists :)

Is this broadcast recording different from the official LD / VHS ?

Been a while since I've watched either version, but the one visual difference is the closing credits. Broadcast version credits run over a freeze frame of the Endor sky, LD/MGM home video release is over a black screen.

OK so if I understand you correctly, there are 3 different versions of the first movie, and the only (known) difference is in the opening/closing credits, correct ?

Would / could you do a transfer of both versions please ?

The broadcast version is already in the can, so to speak. I'll try to get to the Laserdisc after I do the HBO betamax tape of Star Wars for Reave's preservation. Suddenly I'm up to my neck in new projects. ;)

I have a problem with episode 11 - The Three Lessons.

This episode was never released on VHS AFAIK, so we searched a lot to get a nice version from somewhere. Fritz was so good that he provided me with the recording from "On The Run Video" - http://shop.ontherunvideo.com/product.sc?productId=124&categoryId=3

I have resized it, removed the logo (well at least I tried), but I noticed immediately that it's too short. Luckily I have also my old DivX source downloaded from a torrent (that means I have no idea where it comes from).

The DivX source has the standard length (cca 22 minutes), so I of course thought I will simply use it to fill the gaps in the OTR version, but then I realised that the DivX versions is a DIFFERENT CUT ! It's notable during the opening credits, the title and the writer are shown in a completely different spot ! Also, some sections are 4 frames longer on one source, while others are 4 frames longer on the second source.

Well since I'm not doing it only for myself, I would like to read your opinion what should I do next. The possibilities are

1) To make a combination of both sources, where the old DivX source will be used ONLY for complete "scenes" and not just the short 4-frames parts

3) To use the DivX source with the episodes, and the OTR version as a bonus.

What do you people prefer ? I am thinking about number 2.

Also, I'd still need some covers and disc labels :-)

I know it's more work, but I would go for option 1. I'm not going to watch the episode twice to get the whole story, so I'd much rather you made a "complete" episode using both sources.

I have to say I probably I agree with Video Collector.  It's more work, but it seems like the best option for a complete watching.  If you felt so inspired, you could include both versions or the parts where they vary on the bonus disc, but I'm okay without that.  I simply lean towards the most complete episode in spite of slight visual differences.

As always, thanks for your continued effort.

It was a HUGE amount of work, so I made it the simple way. There were many short cuts on the "On The Run" video, and with "short" I mean 4-8 frames. But in some scenes, the OTR video was a few frames LONGER. I don't understand it, did every TV station edited each episode differently ? Was this a common practice in US TV ?

I mostly ignored these brief cuts, otherwise I would work on it MUCH longer. However always, when a whole "scene" was cut from the OTR video, I have added the missing bit from the AVI source.

If you can provide me with some raw scans (400dpi) i take a shot at it.

Raw scans of what exactly ?

Is this good enough ? http://www.megaupload.com/?d=6HI2CXY5

If not, I hope VideoCollector is able to better scans from his tapes

Oh where is Godzilla  Fritz when we need him ? :-) If he won't read this I will send him a mail if he can make bigger scans

Cheers, i need them at least 400 dpi and the covers to be scanned out of the cases. :)

Oh where is Godzilla  Fritz when we need him ? :-) If he won't read this I will send him a mail if he can make bigger scans

I'll be doing the covers for this set myself. Disc art also.

Anything else you want on there? Image restoration by Pittrek, etc?

If I can get it ready in time, we can add the cover/disc art files to the actual DVDs as DVDROM material.

The Cries of the Trees

The Tree of Light

The Curse of the Jindas

The Land of the Gupins

All episodes come from your VHS tapes, I've just done a bit of cleanup + I added back the opening and closing credits to each episode. The exception is of course the episode "The 3 Lessons", which is re-created from your OTR video + the unknown DivX source.

I'd like to put it on myspleen next weekend

PS sorry for the Godzilla reference, I just loved the animated show when I was a kid, and "Where is Godzilla when we need him" was used almost as often as "I have a bad feeling about this" :-)

There are 5-disc alternatives, but I believe those cases are less common.

One big case is less work than 5 separate ones anyway. It will be hard enough finding good artwork for 1 case. :-) If any of you out there have High-Rez images for Ewoks to share, please PM me or post them here. I will credit the contributor(s) on the cover.

I may do single case versions based on the UK VHSs down the line.

Did we land on a particular moniker for the collection yet? Otherwise I'll just put "The Animated Series Restoration" or something on there. 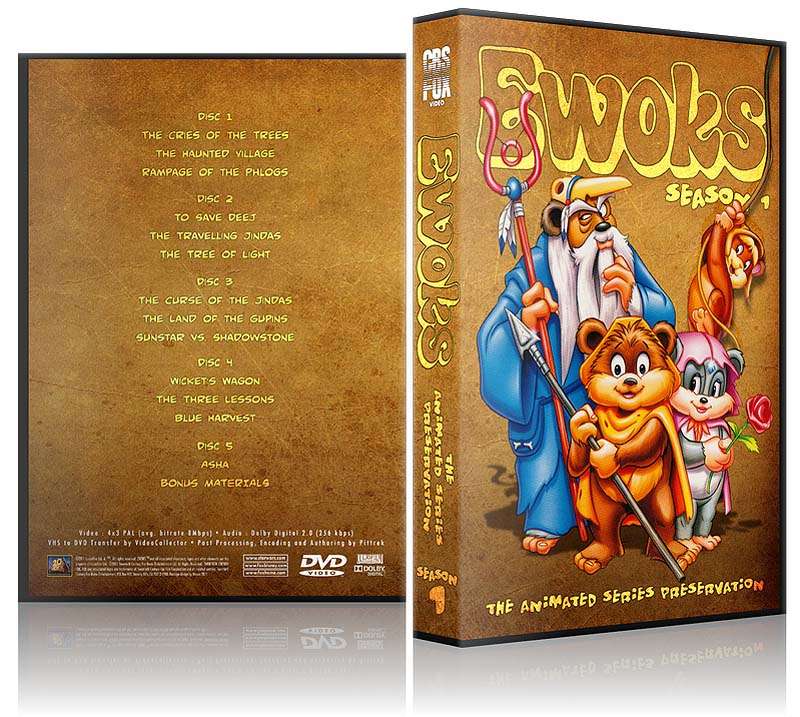 @AvP: I didn't mean to run you over or anything. If I send you scans of the UK tapes, would you be willing to do the single-disc cases based on those?

I always wondred what happened to these shows original negatives after they closed down and were unsuccessful.

Did Lucasfilm recover them or were they thrown in the dumpster/destroyed?

I always wondred what happened to these shows original negatives after they closed down and were unsuccessful.

Did Lucasfilm recover them or were they thrown in the dumpster/destroyed?

I can't imagine Nelvana actually tossing them out. Although they've lost a couple things like the alternate version of Rock and Rule over the years.

Ewoks got a revamped second season Droids never got, so it wasn't unsuccessful in that regard.

@AvP: I didn't mean to run you over or anything. If I send you scans of the UK tapes, would you be willing to do the single-disc cases based on those?

Yea, no problem. Could you also send me the same fonts please.

But if this WAS an official cover, it would have to have STAR WARS plastered all over it. And that parchment background wouldn't fly. What's that old Ewok font doing on there? Make it more modern, I tell you! And there has to be more images on the back, from whichever episode, doesn't matter. And the UPC, you forgot the bloody UPC! More action-oriented front, but not violent, mind. And where are the Duloks? Put some Duloks on there! And it's for kids so just a little more gaudy. And some taglines would be good. Put a forest in there, there HAS to be a forest! In fact, make it look like this:

You're fired, you hack!!

Us custom cover designers have it easy, I tell you.

A small update : I decided it will be best to do a separate torrent for each disc (that should be much faster for my upload speed). The first torrent will be on myspleen this Friday afternoon or Saturday :-)

The covers are more or less finished.

Pittrek, I just need to know what bonus material goes on disc 5 of season 1. If these are done by friday you can include them in the torrent.

I may add some images to the backs once I know how much text to fit. 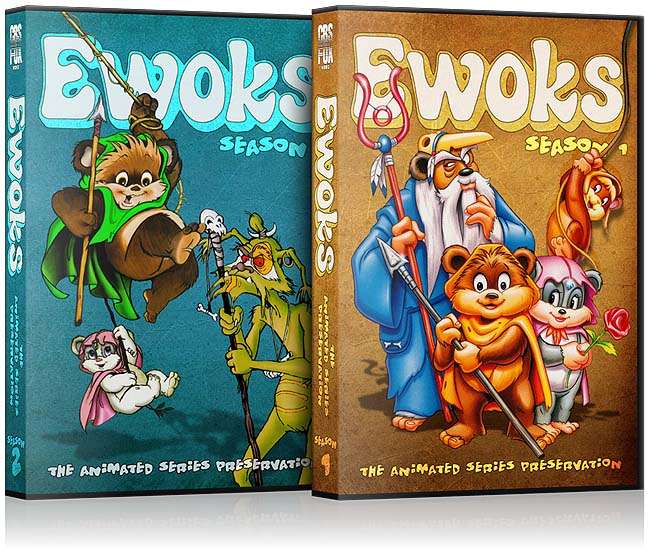 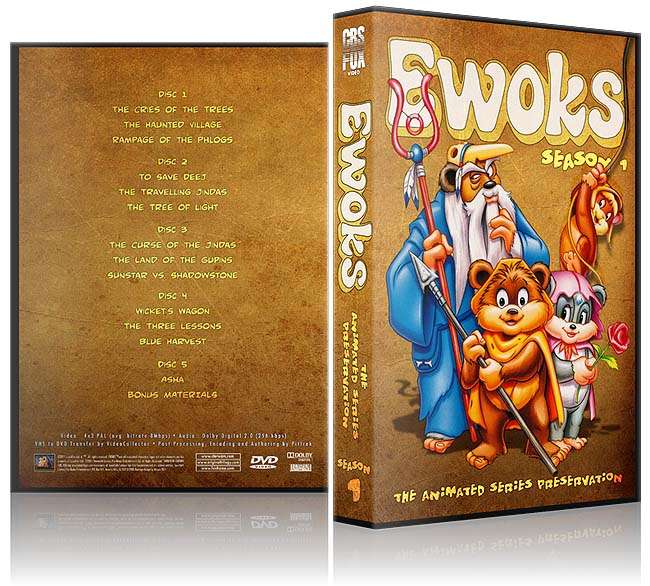 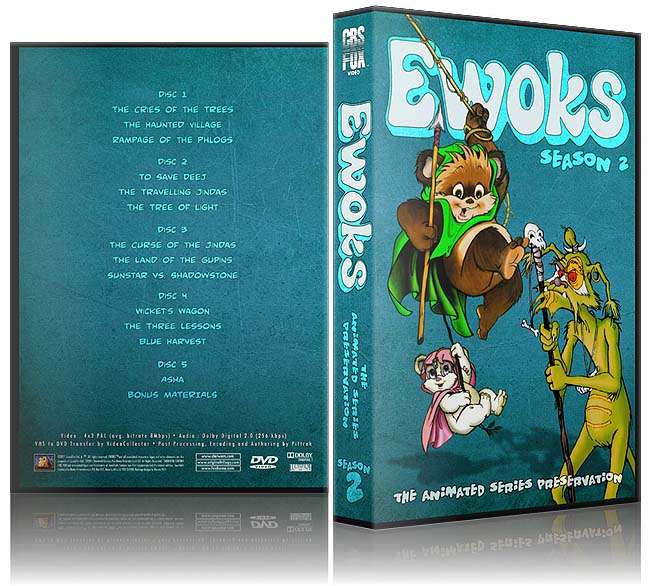