for Luke’s flashback to a previous encounter with Ben I would recommend using footage from this video https://youtu.be/QwWrmSP65lM since it makes more sense in this edits context

No apology necessary. I appreciate your input!

I’m still working on a second draft but I’m really just trying to improve the Luke and Leia scene.

Good idea about the green lightsaber, I think I’ll try adding this!

Here’s an update on the new force ghost effects for Leia!

But this makes Leia feel disconnected from her location and distracts from the actual scene happening.
Instead I changed the effect to resemble Yoda in TLJ. This helps her to blend into the scene better because the lighting matches the environment. This is also better for continuity because we see Yoda as a Force Ghost in the scene immediately following this one.

I also added a dynamic shimmer effect to give some life to her glow. Today I’m working on rendering some of these shots, so I’ll have a preliminary clip up within the next few weeks.

For reference here are the different types of force ghosts: 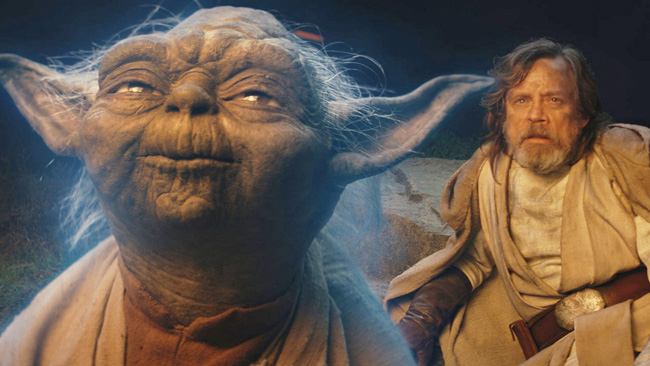 When I saw ROS in theaters I was really disappointed. There were pieces of TLJ that I liked, but ROS felt like a blotched rushed mess. This seems like it might end the saga with actually bringing Balance.

When I saw ROS in theaters I was really disappointed. There were pieces of TLJ that I liked, but ROS felt like a blotched rushed mess. This seems like it might end the saga with actually bringing Balance.

That is the hope!

I really loved parts of TLJ and really hated most of ROS. Combining the two allowed me to distill TLJ and use the plot of ROS to resolve the arcs for Rey and Kylo.

Balance was a big theme in my edit. When Luke said “It’s time for the Jedi to end” I took that to heart. I tried to bring that idea to fruition in my edit, by having Luke and Rey sacrifice themselves to bring a lasting balance to the galaxy without Jedi or Sith, only with the force.

“To say that ‘if the Jedi die, the light dies’ is vanity, can you feel that?” -Luke

Wow! Yes 100%. I was so excited when I saw the trailer and Luke made that statement. I said,“wow Disney is actually doing it. I thought they would stick to the Good vs. Evil dynamic forever”. I’ll have to watch the edit this weekend. I’m glad I found a community of people who are dedicated to the original concepts of balance.

Here is the new clip!

The rotoscoping is still far from perfect, but given that I had to rotoscope dark characters from a dark background, I think it turned out surprisingly well.

This scene is the biggest change going into Version 2 of my edit.

I would be happy to hear feedback, specifically on the sound mix.

The rotoscoping is still far from perfect, but given that I had to rotoscope dark characters from a dark background, I think it turned out surprisingly well.

I saw someone suggested making the background dark like moonlight. I was thinking the portal you could use could also resemble the portals in the World Between Worlds from Rebels. I loved that concept and it would be an easy way to use a darker transition.
https://youtu.be/v254mgxMmG8

Alove4edd said:
I saw someone suggested making the background dark like moonlight. I was thinking the portal you could use could also resemble the portals in the World Between Worlds from Rebels. I loved that concept and it would be an easy way to use a darker transition.

Yes, its a good thought. But at this point, I’m not planning on making any significant changes to this scene.

I did attempt making the scene with a dark sky background, but it didn’t work because the characters faces are clearly backlit with a strong light, so the edges of their faces stand out and it looks really wrong. The lighting in the original scene is so particular because they are in a dark room with a bright light shining through the window.

I originally planned for my scene to take place in a familiar location in the star wars universe, like Mortis or the World Between Worlds. But eventually I decided that trying to replicate one of these locations would only leave much more room for comparison with my scene. Or maybe my scene actually IS the world between worlds, but we are viewing it from a different perspective. I like ambiguity haha.

Version 2 of my edit is complete! It’s available at the same link. The main changes were to the force plane scene as mentioned above, with a few other minor fixes here and there.

Hi, would I be able to get a link to this?

I would love a link please. Thank you for your work.

Can I get a link please?

Please PM me a link. Thanks!

Can I receive a link

I watched this the weekend you PMed me the link and wanted to write a response right away but it resonated with me so much that I couldn’t help but rewatch it, rethink on your choices and dwell on how well your story works.

First off… I love the general story and liked it so much that it made me rethink what was possible with the source material. Luke’s last moment is a great choice. Repurposing Luke and Leah’s conversation at TLJ works wonderfully an epilogue to Ben’s death. This was absolutely a great and fitting ending for the Skywalker legacy. This is a Skywalker story through and through with Rey taking the mantle at the end from Luke. The Skywalker prophecy works even better since it doesn’t work as everyone expected. Annakin, through Luke and Luke through Rei brings balance to the force not just by destroying the Sith but the Jedi as well giving the force back to the masses.

I actually got a slightly different take than what you might have intended. This Luke is not necessarily going through PTSD but rather denial and depression. His optimism from RotJ is not broken by his failure with Kylo but from the inevitable knowledge that to fulfill his purpose, Luke has to allow the deaths of Leah, Kylo and now this new student Rey. He has this line where he tells Rey this won’t end the way she thinks. TWhen Luke knew Rey would die and early on knew Kylo needed to die as well.

While this might not fit your vision here’s some changes I think would greatly enhance this narrative.

Don’t want to sound too negative because your vision really resonated with me. Great Job. This is how I wanted Luke to go out.