So in the process of assembling my 3-in-1 Hobbit edit, I found myself becoming more and more ambitious, and having to teach myself many of the necessary skills, such as compositing, colour grading and sound mixing, that I hadn’t really done before. I decided I care too much about The Hobbit to be comfortable with making it my first effort, and, to be quite honest, I want to make a name for myself as an editor and build some anticipation for the main event. So I’ve decided to revisit a couple of earlier edit ideas first.

Obviously, the main point of The Hobbit: Roadshow Edition is to assemble a single coherent film telling the whole story. These edits are comparatively much smaller in scale, and the first one is an extended edition of Edgar Wright’s Scott Pilgrim vs. the World, incorporating a few full-length songs that were only heard as snippets in the original movie, adding in a number of deleted scenes and alternative takes, and so on.

It’s not strictly just an extended edition, as it removes a few elements and includes alternative takes or scenes, not just extra shots or scenes. Additionally, because the deleted scenes included on the Blu Ray were cut at various stages of the production, not all of them feature completed visual effects, and most of them require colour grading to fit in with the rest of the movie. Some were partially reshot, and so require more extensive work to match them to the reshot footage that in some cases is the only available version of the rest of the scene.

So it’s a pretty good test for putting together footage from disparate sources, which I’ll be doing a fair bit of for The Hobbit, in terms both of using bits from elsewhere in the films (see this scene for an example) and of creating whole new scenes (for example, the all-new prologue featured in the teaser trailer).

The editing process itself is fairly straightforward, and is in fact pretty much finished; after the picture’s locked, I’ll need to do some work to make sure the colour grading and sound mix all balance, and add in a handful of VFX, but that shouldn’t take too long. In the first post below is a list of changes intended for the edit.

Current changes planned for the edit, in chronological order:

I’m not sure whether to muck with the credits yet, but I do have a few ideas. There’s some very cute screen test footage on the blu ray which could potentially be used for video cast credits, although it isn’t complete: Aubrey Plaza and Anna Kendrick are absent entirely, as are all the Evil Exes save for Mae Whitman. I’m far from wedded to the idea, but I’ll have a bit more of a poke around on the blu ray and see if I can’t dig up something that would fit. Other ideas include:

I also have in mind a handful of minor edits to existing scenes — often as little as half a second here or there. It feels somewhat sacrilegious to do this to Edgar Wright, of all directors, but there are parts where I feel the chemistry between Cera and Mary Elizabeth Winstead needs a little tightening, and with the shifting of a line here, the deletion of a pause there, I may be able to improve it. We’ll see.

[1] I know Scott is meant to be kind of a dick, but there’s a difference between being kind of a dick and casually racist. Same goes for Kim’s two uses of “retard”, already cut — it’s true to life for how hipsters speak, but it’s unnecessary. It may be considered ironic, given I’m reincorporating a few elements that were originally cut for rating reasons, but this is more for characterisation purposes — I think the original line makes him too unlikeable. Michael Cera does play it well; Scott does appear to realise partway through the sentence that it’s inappropriate. But Knives’ response, “I don’t care,” really doesn’t help. I’ve managed to edit it such that she interrupts him at the word “date”, which serves the additional purpose of giving her a little more agency.

Looking forward to this!

Sorry for not posting any updates along the way with this! It’s 99% done. Most of the edits mentioned above have now been done, and the colour grading and matching is complete. Only the Lee’s Palace scene is still unfinished, and I think I’ll probably just have to restore something approaching the theatrical version; there just isn’t enough footage available anywhere I could find to include the whole song.

I still like the idea of the “serial killer” post-credits ending, but I’ve lost contact with the guy I had in mind for it. If anyone’s interested and can do a Canadian newsreader impression, I have a script ready to go, but I’m not going to hold up the edit any longer for the sake of a stinger gag. The “Summertime” music video will take its place.

I’ll be tinkering with Lee’s Palace over the next week or so, and after that it’ll just be a matter of putting together the titles and a Blu-Ray ISO.

Wow, Scott Pilgrim vs. the World has a LOT of deleted footage! 😮

Yay! Looking forward to this very much 😃

Runtime? Also, are there any deleted scenes you didn’t add?

About 130 mins, including the cartoon at the beginning. I kept the theatrical ending, so the alternative ending isn’t in the edit. It’s not a complete kitchen-sink cut.

So is that the only one you didn’t use?

I’m not using the full version of “Black Sheep”, because there just isn’t enough footage. I’ve cut a few bits here and there from the original film (mainly to tighten a reaction shot or make room for the new material, although a couple of lines and shots are gone). Far as I can remember, not having it in front of me right now, all the other deleted scenes (including the alternative “afterlife”) have been used at least in part.

I have contacted another actor friend about doing the “serial killer” stinger after all, which may push the release date out a smidge, but hopefully not. He’s French-Californian rather than Canadian, but I’d be surprised if he can’t do the accent. Nothing confirmed at this stage, but fingers crossed.

Bit of news: the edit may be delayed, because it looks like I’ve found someone who’s keen and able to do the stinger gag after all. We’ll see how we go with recording and assembling it, but I (obviously) won’t rush things for the sake of meeting the Easter date.

A few other notes, just while I think of it:

Here’s a rough test render from the stinger. 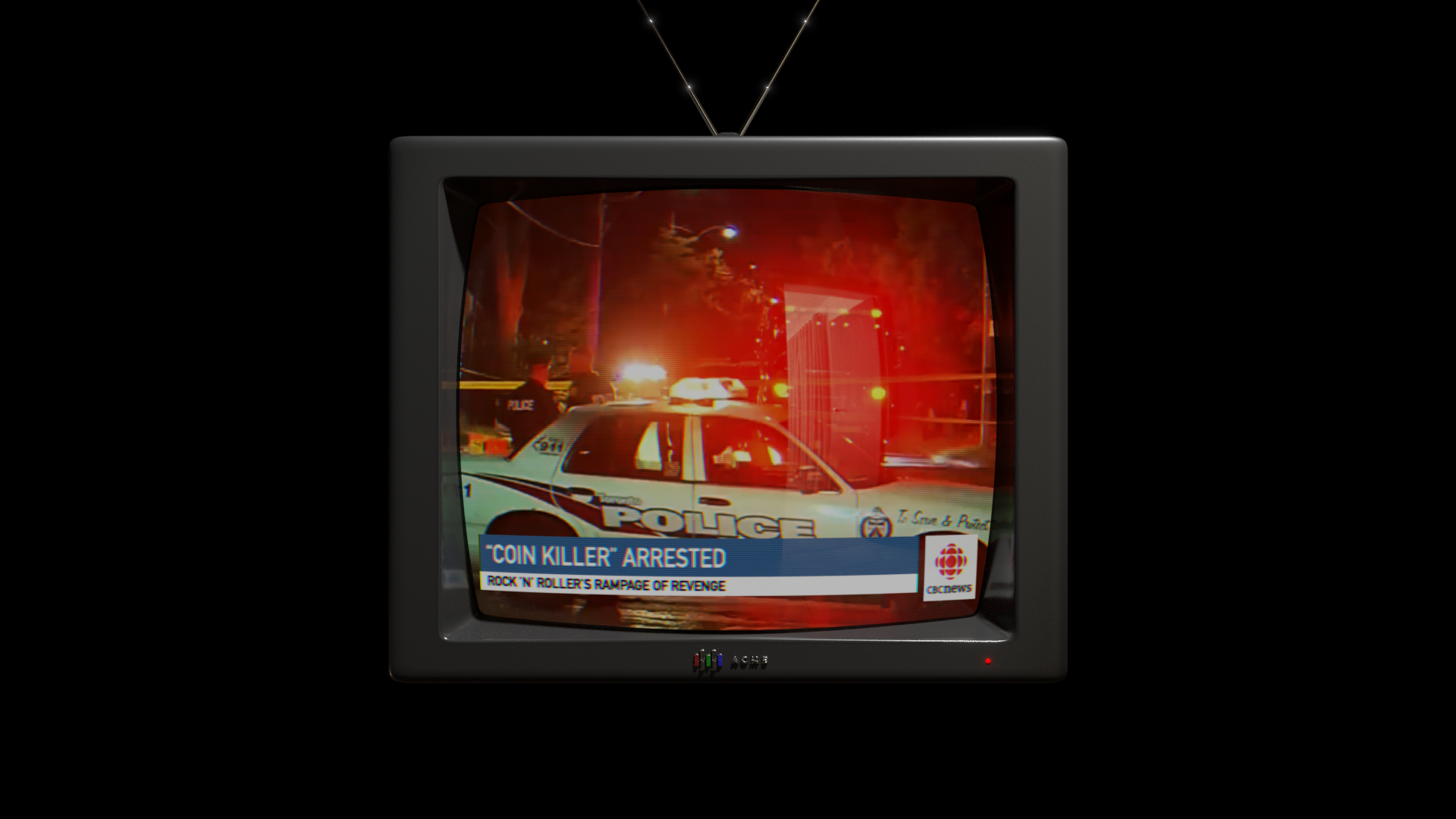 Looking forward to it!

It’s a great project. I’m impatient to see the result.

Well, the stinger script went out to my friend in April, I got the recording back last month, and the raw video for the stinger is now assembled — that is, the fake news broadcast to render onto the TV screen. To give you some idea of what’s gone into this, on top of the newly recorded video of my friend performing the skit, I’m using:

On top of green-screening the actress into the “virtual newsroom”, just about every other shot ended up having VFX applied: the shots of the Patel fight were treated with JPEG damage to look like dodgy cam footage; the shot of Scott and Ramona graded to suggest a mugshot and to change Ramona’s hair colour; the shots of the Evil Exes desaturated and slo-mo’d out of “respect for the dead”; the lower third graphic seen in the preview above created; and the whole thing treated with CRT scan lines and colours slightly out of phase.

All going well, I should have the movie ready for submission to the Fanedit Academy later this month, and I’ll report back as soon as I have a release date!

So I read through the thread and I didn’t see if you were switching out the ending where Scott ends up with Knives? Is that your plan or just an different ending all together

The “serial killer” joke ending I’ve made is just a mid-credits gag; it’s not to be treated as canon, if you care about that sort of thing.

Would it be okay to ask for, and possible for you to create two edits, each include the different end scenes? The knives ending and the Ramona ending. I believe that both scenes work plus it’s a nice callback to the video game.

Assuming I can figure out how to do branching, I’ll make it an option on the Blu Ray for you. I’ve not authored a disc before so that’s the only caveat; I’m basically teaching myself everything with this one.

I’d be down for a randomized ending, as I literally have no preference.