For this project, I shall be using the Peter Sellers out-takes and extended footage utilized in the 1982 hack job "Trail of the Pink Panther", and inserting that "Sellers" footage into the movies that it had originaly been filmed for. The first film (instalment) that will be done in this project, will be an extended version of my all time favorite film of the Panther series "The Pink Panther Strikes Again".

Yep, I think you are right about most of the footage coming from "Strikes Again".

Did I just hear a grone?

Herbert Lom and a much better assortment and editing of the Peter Seller’s best of segments would hopefully be the saving grace of this fan edit.

I would need to cut some painful scenes with actor Richard Mulligan, and the young Clouseau played by some bad imposter. My fan edit would be more of a wrap up short-story to the series and, be a much more respectful homage to Peter Sellers then the insulting mess that was done by Edwards and MGM/UA back in the early 1980's. The attempt to continue and milk the franchise by stretching things so thin as to make two features without any "new" input from Peter Sellers (only by the use cut footage), and to attempt to build an overly contrived new plotline for the series was just a total disaster. In 1982, the two films had been taken by movie audiences of the time as in "Bad Taste" and a "Rip Off".


“First feel fear, then get angry. Then go with your life into the fight.” - Bill Mollison

This edit will have a basic plot, but not one with so much over the top and needless "bad" and "forced" humor.

The object here is to wrap the "Panther" series up with a short story, and to pay a simple tribute to what Sellers had done in his installments.
It's a fan edit ment to be placed into a fans dvd player when he/she wants to just crack up to the "Best of Clouseau" without the dead weight of 2 (or is it 3) needless and stupid go no place sub-plots. With the use of branching the DVD program, you will be able to view the flashback clips with a sub-story, or without one.

This is not going to be some major plot that revolves around a replacement detective.
It will be a more compact "move along" plot, with more flash backs (from "Return of The Pink Panther" too), and now without the bad low-budget music overdubed for "Trail".

You know, I don't want to give too much away, but Inspector Clouseau will now have vanished sooner in this edit. Some of the events from Curse will now happen inter-cut with events from Trail. A good deal of the reporter's scenes will now be cut out or be re-sequenced. There will be no over-blown mafia subplot in this edit.

If this project turns out the way I hope it will, I'll need some people to give it a pre-view.


Incidentally the titles for The Pink Panther Strikes Again, from Richard Williams Studio, were largely animated by Tony White, who I've been talking to for my Thief and the Cobbler/Richard Williams project.

Tony's words on the titles ...

More:
http://tonywhite.net/pink.htm
Originally posted by: ocpmovie
A clever idea! Go for it ...


Incidentally the titles for The Pink Panther Strikes Again, from Richard Williams Studio, were largely animated by Tony White, who I've been talking to for my Thief and the Cobbler/Richard Williams project.

Tony's words on the titles ...

That is so kewl! 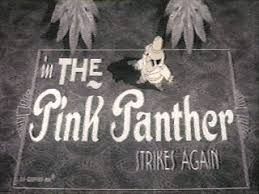 "The Pink Panther Strikes Again" titles are the best of the "Panther" series!

I did not like the titles or music for "Trail" or "Curse" at all. Do you think I should use a mix/edit of all the past titles, or make some all new animated titles by me and my friend? what would be best? We did the blue eyes for DUNE, so how hard can moving a panther and small man around some new titles be?

"Facets of the Pink Panther"

So much animation has been done of the Pink Panther - he's starred in a million different animated shorts of his own, which are out on DVD, and can be Netflixed I'm sure.

Source your Panther footage from those. You might be able to chromakey out the Panther from certain shots if he's on a flat color background or something, and put him on your own background. For Return of the Pink Panther, Richard Williams and Ken Harris often put him on black, so that's easy enough to reconfigure - you can steal your Clouseau from those films.

Come up with something original from all the Panther animation that's out there. Use Return and Strikes Again as your basis.

Give your new film a new title. I don't like "Facets of the Pink Panther" though. Not catchy.

So you two do animation? Nice. So do I. You'll certainly need to draw/animate SOMETHING for your new titles, probably the titles themselves and their lighting FX.

Williams' animation for Return of the Pink Panther is a masterclass in lighting effects, as usual ...
I read somewhere that, at the time of his death, Sellers was writing a script himself for the next installment. The title was "Romance of the Pink Panther".

That title might not exactly fit the film but it might be interesting.
The Pink Panther: Re-cut Gems

This should be a great project. I'd live to see this in the same style as the MGM six-pack that came out a few years ago. They just looked good.
Titles...hmmm....the title should reflect that this is an ending of the series. Slightly somber, perhaps, especially considering that the viewer likely knows that Sellers died during the production of the film you're deriving this stuff from.

Good luck and keep us posted!

Really looking forward to this one...

Thanks for all the title ideas, and the suport for this project!

This should be fun.

At this point, I think I will stay with "Facets of the Pink Panther" for the compilations title.

this would be very interesting to see.
By the way, I don't know if your aware of this, as the release was not publicly announced, But "Return of the Pink Panther" has a new Anamorphic release from Universal (as opposed to the letterboxed artisan release). that way you'd be getting equal quality frames for the Clouseau character.
I attempted this myself about a year ago but failed because the resolution of the discs were really wonky. I've since learned Gordian Knot for resizing video so if you run into issues, drop me a line and I'll see if I can help. Glad somebody else is taking up this project.
I am fluent in over six million forms of procrastination.
re: encluding cut footage / extended scenes:

I would love to see that edit; I though to make it when reviewing Trail (particularly the sequence from Revenge, with the shopping bags) and the one on the street, etc...

It also recently occured to me to re-cut the movies excluding the stuff that's just Edwards taking advantage, and telling his own story; staying rather with the Closeau gags.

Strikes Again, in particular, strikes me as a movie which would gain considerably from judicious trimming of the scifi Herbert Lom subplot.

And yes, I have a copy of the Romance of the Pink Panther script. PM me, I suppose, (and I'll just have to figure out how PMing works!)
Ronen:
You have to go into your settings here on the board and turn PMs on first. It's a silly default that stops all new users from receiving PMs straight away.

Fanfiltration, just wanted to say I am interested in this idea of yours and hope that you can go through with it (find the best-quality DVDs before starting).

To contact me outside the forum, for trades and such my email address is my OT.com username @gmail.com

I'm now looking over the DVDs in the Pink Panther box set, and I've forgotten just how bad "Trail" was.

You can Netflix any of these ... which was my tactic while doing my Richard Williams collection. Anyway.
Just got done with the extended edit of "The Pink Panther Strikes Again", and I am now starting the work on the "Trail" / "Curse" edit.

"Trail" and "Curse" are just too horrible! I'm not going to do an edit of them.
The jokes are so dated and the story is so boring... There is just no point.
I'll make a set with extended versions of "Strikes Again" and "Return of", and that's all.


“First feel fear, then get angry. Then go with your life into the fight.” - Bill Mollison

Fanf- Curse should also (if I'm not mistaken) have an extended scene from Revenge in there.