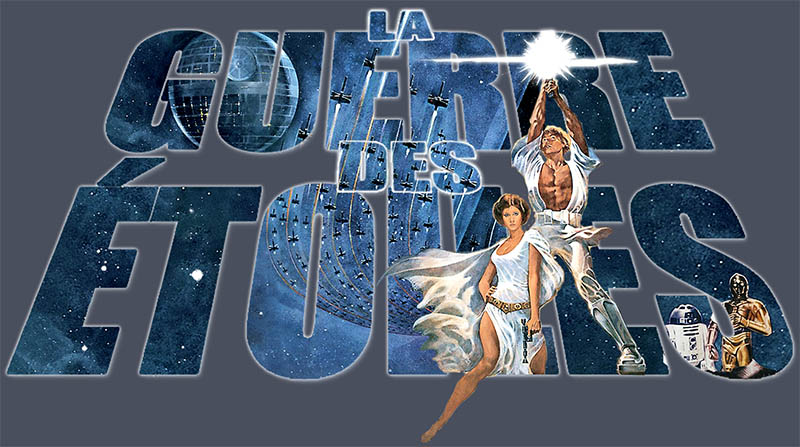 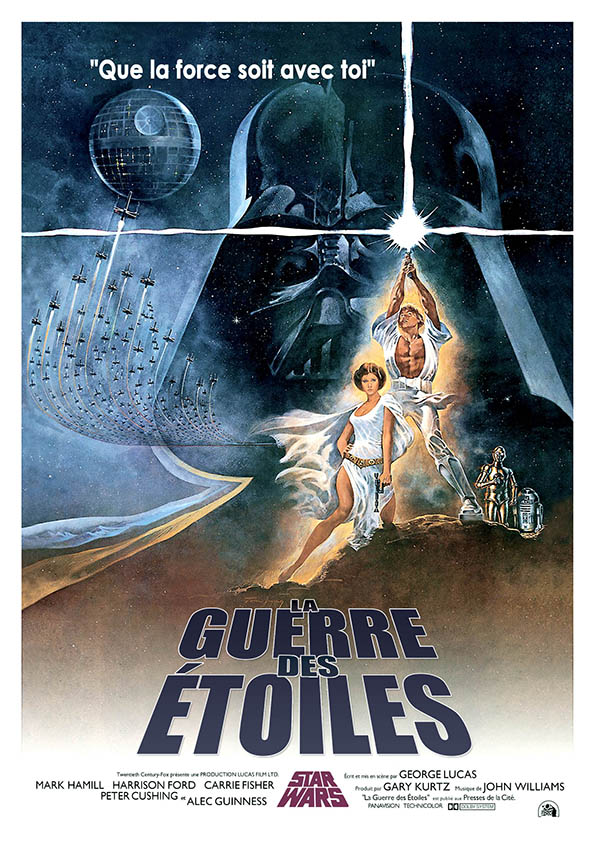 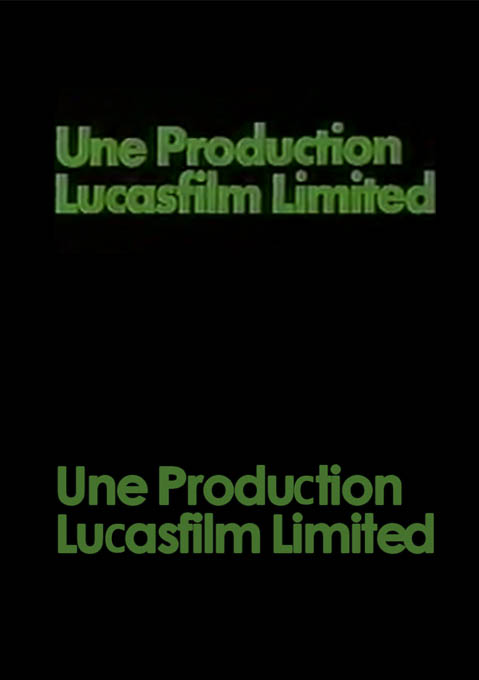 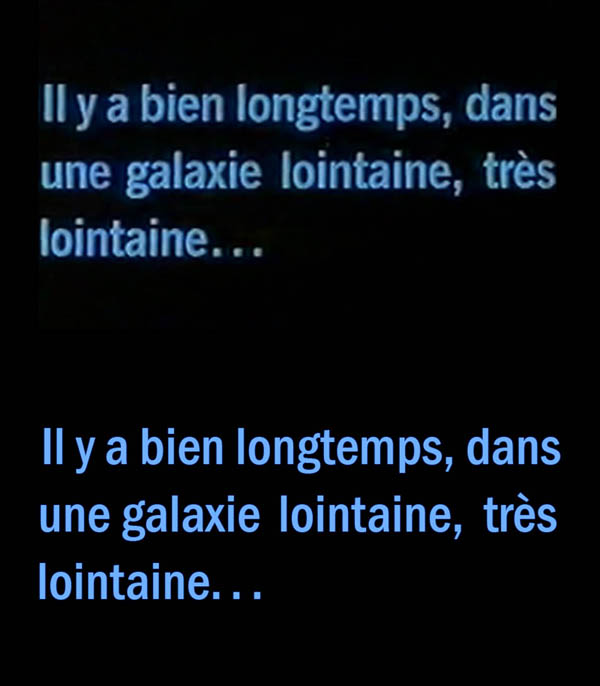 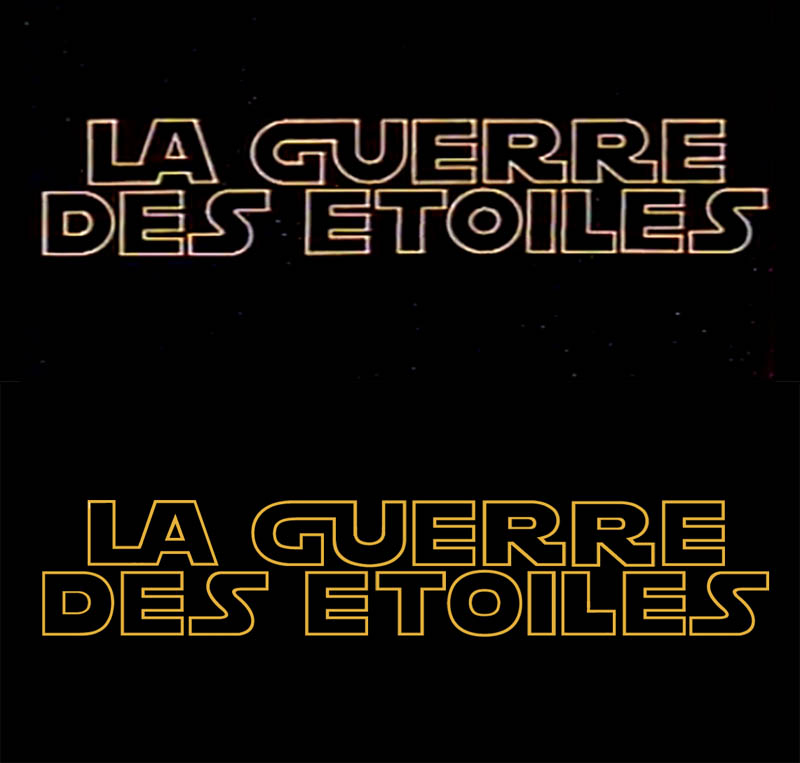 Great project, I wish you luck.  Regarding audio, the French audio from the NTSC discs is the correct speed for syncing with Harmy's video and the correct pitch for matching the French theatrical prints.  PM me if you're interested.

You may want to work directly with the German group, as they may have some scripts and suggestions for how to do things like the crawl text.  Also you may be able to ask Harmy for a sub-free version (please give him time first to finish v2 though!) so you can add burnt-in French subs.  Are the French credits different?

And I also want to put in a plug for my own subtitle project (Project Threepio, in this forum), which you may find useful.

Hehe, I kid, but apart from the grammar mistake, the font used for the lucas film title card isn't quite correct and is too static and feels like video and not film. The same for "La guerre des étoiles" that pulls back in the stars. The pulling back just feels too smooth and video-ish. Perhaps someone who is more knowledgeful of these things can chime in and give advice.

Cool project by the way. This deserves to be preserved, even though I personally can't stand the french dubbing! Dark Vador sounds like such a bland, old French guy!

“qui pourrAnt sauver son peuple” is what is writed in the original french crawl. It’s a big mistake, but it’s here.

I’m not sure if I want to correct the text. The original theater trilogy had the mistake.

Hehe, I kid, but apart from the grammar mistake, the font used for the lucas film title card isn’t quite correct and is too static and feels like video and not film. The same for “La guerre des étoiles” that pulls back in the stars. The pulling back just feels too smooth and video-ish. Perhaps someone who is more knowledgeful of these things can chime in and give advice.

I will write to the Germans who do the same for her version to know how they do the job.

Actually I only have Final Cut Pro. I see lot of people have done the crawl with After Effects, but I don’t have it.

The crawl is made with SWTSG : http://alienryderflex.com/crawl/ Si it doesn’t look exactly like the original french crawl.

I first made a picture of the Text with Photoshop :

And I try to make the crawl in Final Cut using the 3D Object Tool, but I didn’t succed to make something nice. So I use the SWTSG tool.

Are the French credits different? 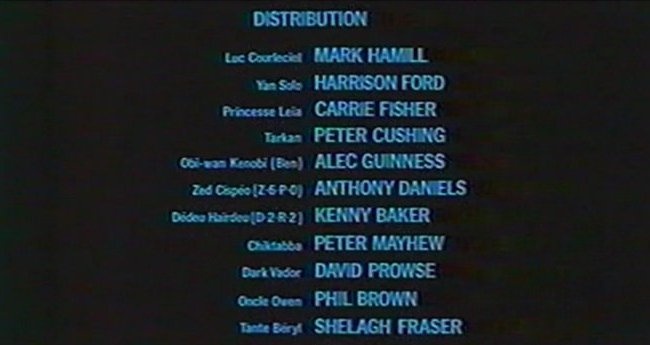 All the characters have “french names” :

Oh wow, I never knew about that grammar mistake.... I guess I never bothered to look. How funny!

Thats pretty much what I had planed to do with my french, german and UK laserdiscs. Someday I will, when I have the free time.

I just made a better Lucasfilm screen.

Here is a new Intro.

I redone the Lucasfilm and "A long time ago" screens. I redone the crawl with Motion 4. The crawl is not perfect but very close to the original french crawl.

Very good reconstruction. But, I think it would be better if you add a little "film-shake" to the recreated frames.

Great project! Being VCR-less for basically all of the 80s, I grew up watching Star Wars on TV any time it was on, including broadcasts on Radio Canada, out of Québec. I'll always have a soft spot for the French versions, so a project like this has a lot of appeal to me.

For "Il y a bien longtemps, dans une galaxie lointaine, très lointaine..." and the main body of text in the crawl, use "Trade Gothic" instead, it's a much closer match than "Franklin Gothic" you used.

<span style="line-height: normal; "> </span>I just ripped the french Laserdisc, in order to have a good widescreen model for the crawl.

Here it is, with a few seconds of the intro :

I hadn't really thought about it before, but when I used to watch it in French years ago, I guess they would've used the French text, not just play the English version with the French dub. Hmm...

The same thing for my country...

I just discovered this project on Harmy's Despecialized Edition Remastered (which I'm trying to play on my TV at the moment) project page and I'm amazed because I was wondering if we could choose an alternative opening crawl on Harmy's BD since I rediscovered the original French one on YouTube. I must say I watched La Guerre des etoiles a lot in the past few months and I discovered things that make me sick from the French dub (Vader's voice which isn't Georges Aminel's, Chewbacca being called Chiktabba, ...) and so I start being used to watch it in English. Is letting us choose between French and English part of your project?

Quick question: While I remember watching "La guerre des étoiles" with this opening crawl on TV circa 1993, I watched Empire and ROTJ years later, did they also have the "La Guerre des étoiles" name or are them just "Star Wars"?

For the moment I only plan to make a "Total French" version as it was released in 77.

I don't have the knowledge to make a BR with the 2 crawls. If someone knows about that, he is welcome.

For the moment I'm finishing the "Total french" version of Q2 fanedit of the Prelogy, then I will start to work on French EP4.

ESP and ROTJ had too the name "La guerre des etoiles" in the crawl, and so they are in the first LD release.

What exactly are the differences between the "total French" and Ep4 French? Is it just a change in the crawl and end credits?

PS: this is a bit off-topic but I was just reminded of Yan Solo when, right before shooting Greedo, he says, "Pauvre cave!" - it's one of those weird moments where they completely change what he said...but it works..!

Yes, the crawl, the end credits and the french subtitles for Greedo.

I really like the french translation, because if found the movie more funny in french. I like when Solo say : "Prends ta pelle et ton seau et va jouer" to Luke. Anyway, I prefer Solo french voice as the original voice of Harrison Ford.

Exactly! I feel like whoever translated this film had a lot of fun doing it. It's a bit of a shame that the translations became more "literal" for the later films.

Just two questions: 1) was the grammar mistake (pourrant/ont) fixed for the Ep4 crawl? 2) what are the differences between the different Greedo subtitles?

Sorry to be so dim about the OT in French... I grew up with the original voices, but the French dubs have always fascinated me since I first heard them in the cinema in 97.

2) I don't know in matters of translation.

Heh, that's really funny... the German translation of that line is rather dry compared to both the English and French versions: "Schön brav Junge, sonst kannst du gern wieder aussteigen!" ("Be a good boy, or feel free to get out right away.") I also noticed that Han keeps calling Luke "Tiger" in the French dub :D

And regarding the dubbing voice actors, it's like that in Germany... you grow up with these voices as opposed to the actors' own voices, so it feels weird when you listen to the original for the first time. And while by now I'm used to watching original versions, German dubs still are very important to me. And with something like Star Wars there's so much nostalgia in these translated versions, that it's impossible to let those go.

And regarding Harrison Ford it's especially nice that since Star Wars he has the same German voice actor, Wolfgang Pampel, on all his movies... and he's so good, that he simply IS Ford for us. I'll definitely give some of the other dubs a try now that the MKV is loaded with audio options :)

1) was the grammar mistake (pourrant/ont) fixed for the Ep4 crawl?

The mistake is still present in the Laserdisc release.

As the project is a preservation of the original theatre release, I think that the mistake must stay so. In the other hand, when I see it I always want to fix it !

The Greedo subtitle don't change, I only want to erase the english subtitle form Harmy's release in order to insert the french subtitle.

Laserschwert, I agree with your speech. The french dub isn't perfect, but I grew with these voices and sentences, so I love it.