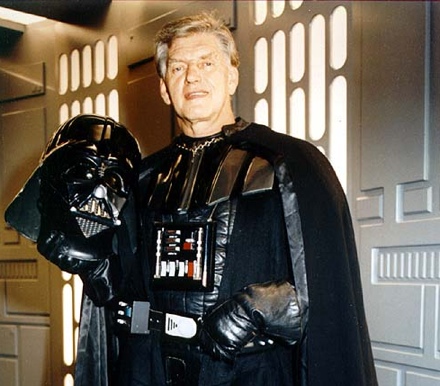 During an interview with Equity Magazine, David Prowse, the actor who played (but didn’t voice) Darth Vader in the original Star Wars trilogy, claims that LucasFilm has yet to pay him any residual payments on Return of the Jedi because the the film has yet to make a profit.

“I get these occasional letters from Lucasfilm saying that we regret to inform you that as Return of the Jedi has never gone into profit, we’ve got nothing to send you. Now here we’re talking about one of the biggest releases of all time,” said Prowse. “I don’t want to look like I’m bitching about it,” he said, “but on the other hand, if there’s a pot of gold somewhere that I ought to be having a share of, I would like to see it.”

Of course, Return of the Jedi has grossed over $572 million worldwide, which includes an estimated $88 million when the film was re-released in 1997. So how is it possible that the film has yet to make a profit? Prowse really can’t be serious, can he?

TimesOnline contacted LucasFilm about the story but the company declined to comment as a matter of policy. In the interview, Prowse warns young actors to know exactly what kind of contracts they are signing:

Hollywood contracts are notoriously one-sided, but I’m pretty sure Prowse must be mistaken about that letter and what might be owed to him for Return of the Jedi, right?

/Film reader Seth posted the following in the comments: Gross profit is what you get if you are a big enough actor or producer to demand this. You get a percentage of profit based on the gross of the film - how much it makes before any costs. Therefore, you are guaranteed to get paid since the studio can’t hide anything. Very few people can demand gross points. But if you have them and your film hits big, you make millions. In fact, this can be so profitable you will sometimes see big stars forgo any salary at all except union minimum just to get these points.

Unfortunately, Mr. Prowse relates what is almost universally the case with a net profit clause. Studios almost never pay on this clause, as they claim nearly any and every expense possible to keep the film from showing any actual profit. Very few films have ever shown a net profit on the books.

How do they do this? Well first, imagine that George Lucas decided to go to New York tomorrow to talk about showing Return of the Jedi in 3D. And he stayed at the Ritz Carlton, ordered sushi at 3 a.m. from room service and used the hotel phone to call Bahrain to make prank calls.

Well, 26 years after the release of the film, the accountants at Lucasfilm are going to charge $86,000 to the costs of Return of the Jedi. I am NOT joking. This is what they do. If George Lucas utters the words Star Wars and he’s spending money, they’re putting it on the red line for one of those films.

On the flipside, Mr. Prowse would be wise to use the FORCE, aka a lawyer, to get Lucasfilm to cough up. You see, as you can tell by the above, the accounting is utter bullshit. And on a film like Return of the Jedi, Lucasfilm would be extremely reluctant to open its books in open court. Extremely reluctant because of how incredibly embarrassed studios have been in the past when they have made the mistake of doing this. Plus, the ensuing publicity would be embarrassing to Lucasfilm. Can you imagine the hedlines if Darth Vader sued George Lucas? In short, if you have net participation on a film that has grossed hundreds of millions, you may get some dough, but you’ll have to sue to get it.

So the special editions really are legally a separate thing from the originals? (And how does it affect releasing the originals?).

In other words, if RETURN OF THE JEDI (1983) is legally a different movie from STAR WARS EPISODE VI RETURN OF THE JEDI(1997), why was that done? It certainly doesn't have to be done with every rerelease of an old movie. If it's to make it harder to share the profits (since it's a "new" movie that came out in 1997 and needs to get into the black all over again) that is really chickenshit.

(Mr. Lucas takes the stand and raises his right hand.....)

Prosecutor: Mr. Lucas, are you telling me the versions from 1977-83, called Star Wars, Empire Strikes Back and Return of the Jedi are not the real versions, so you don't feel anyone should profit off them?

Lucas: When you say Star Wars, you are talking about the Saga, yes I make money off of the 6 movie saga.

Lucas: The movie that came out in 1977 was called Star Wars Episode IV: A New Hope, I really don't know what you are talking about???

Prosecutor: Star Wars, the movie that showed Uncle Owen unknowlingly buying C3PO and R2D2 which set everything in motion.

Lucas: No, Uncle Owen owned C3PO for 10 years after Episode I, and when he bought him in Episode IV, he didn't recognize the only gold plated droid who talked like an english butler in the galaxy.

Prosecutor: What???? Ok, how about Return of the Jedi from 1983, where Luke talks to Leia about their mother, and Leia says she remembers her very sad and died while she was very young.

Lucas: No, No, No! Luke/Leia's mother died at childbirth, Leia is having force visions of her mother in that scene.

Prosecutor: Huh???? Ok, how about the older Anakin shown at the end as a force ghost smiling at his son next to Obiwan and Yoda.

Lucas: Older Anakin, not sure what you mean?? Anakin died in Episode III, and then reappears as his 20 year old self at the end of Episode VI, even though Obiwan, who never turned to the darkside, has to sit in jedi heaven as a crusty old man.

Prosecutor: Your honor, I move a motion to arrest Mr. Lucas for perjury!

Judge: Sir, I have been a Star Wars fan since 1977, and I have been dealing with the Mr. Lucas that is on stand today for the past 12 years! Get used to it!

At first I had to check if the news item isn't from April 1st, but then I thought that GL screwing the very people who made him rich is nothing new...

I saw the original theatrical release of the Old Trilogy on the big screen and I'm proud of it...
How did I accomplish that (considering my age) is my secret...

This isn't the first time I've heard something like this.  The author of the book Forrest Gump became quite agitated with Paramount for never giving out his net profits because they claimed that the movie Forrest Gump never made a profit.

That's the way Hollywood...or most of Corporate America, for that matter...works.  If they don't show a profit, they don't have to pay income tax.  Any other money they can avoid paying to anyone else is just an extension of that.

My outlook on life - we’re all on the Hindenburg anyway…no point fighting over the window seat.

I gather the other cast members haven't received royalties, either? Or, are they just sticking it to Prowse again? :-P

I'm sure Prowse got paid for his work on the OT. It'd be nice if everyone in the movies we like were filthy rich, but I don't see any reason Lucas should be more generous than he legally needs to be with anyone who has a contract. Why should he be judged more harshly than the rest of Hollywood?

It's not like no other 6'6" actors could have pulled off Prowse's brilliant and nuanced performance.

It's not being paid that he's complaining about. He didn't do the role for free. He was apparently contractually entitled to a percentage of net profits in addition to his salary, but actually getting that is a tense legal subject.

Lucas has made huge amounts of money off Star Wars. I'm sure he could spare some. Particularly seeing as he's ruined Star Wars, so I don't think he's all that deserving of the money.

You missed the point, Boost. It isn't a charity thing on Lucas' part, it is a contractual (and therefore legal) obligation which he is getting out of by claiming that Return of the Jedi (one of the most sucessful films of all time) has yet to turn a profit. Just because other studios do it does not make it right.

It is also no secret that George has a thing against Prowse, so, as Mielr already asked, is Prowse the only one being told this, or are all actors getting the same treatment.

"Every time Warb sighs, an angel falls into a vat of mapel syrup." - Gaffer Tape

I doubt that George would go out of his way to target one actor, suffering from and doing a lot to raise money into findiing a cure for Prostate Cancer, just because of some yet to be proved theory that he was leaking plot details to the press.

That would be like saying Anthony Daniels and Kenny Baker don't get along.

Perhaps if George looked under the sofa cushions of his tiny $100,000,000 ranch he might find a bit of lose change he could send big Dave.

Just you all wait until GL replaces Prowse's Darth Vader with Hayden Christiansen's the second Prowse kicks the bucket.

Want to book yourself or a guest on THE VFP Show? PM me!