I recently acquired a 16mm print of Pixar’s 5th short film, Knick Knack (https://m.imgur.com/a/ICJZl7Z) since I have been very interested in converting film to digital and doing digital color-grading for some time. Being on film, I think it’s safe to say that this is the sought-after 1989 original “uncensored” version. However, I don’t have a personal 16mm projector of my own to screen it and know what its current condition is (yet), but I am currently looking for one in my area to test it. Ultimately, I’d love to be able to convert it to digital to preserve it. I do need some help getting started, however.

What is a good scanning lab that’s well-known for scanning these types of cinema film? I’m looking for one that has a scanner with the ability to scan at 2K, and includes cleaning and ideally a digital file for little or no extra charge. One in East/Middle Tennessee would be best, but I am 100% willing to send it out if there’s a really good one out there. I think since the can says 4 mins, that this is around ~144 or 145 feet of film if that helps somewhat.

How many of you would like to see this eventually released? I know there was a version that appeared on Archive .org, but it had heavy sound/color issues in some areas and it was only 480p as well. I would be willing to color-correct a 2K version, and the soundtrack was released on CD so if I need to fix the sound, it shouldn’t be extremely difficult. If a lot correction is needed, I’m willing to invest in the Laserdisc and Blu Ray sources. Please comment with helpful tips and such if you think I’m going to need them. Thanks!

I’d be really interested in seeing this come to fruition.

I’ve sent you a private message, click the speech bubble to the left of your avatar.

Would love to see that, too.
But, being a film print does not need to be the original version. I have a print of the edited Version. Well, it is not 16mm, but 35mm. 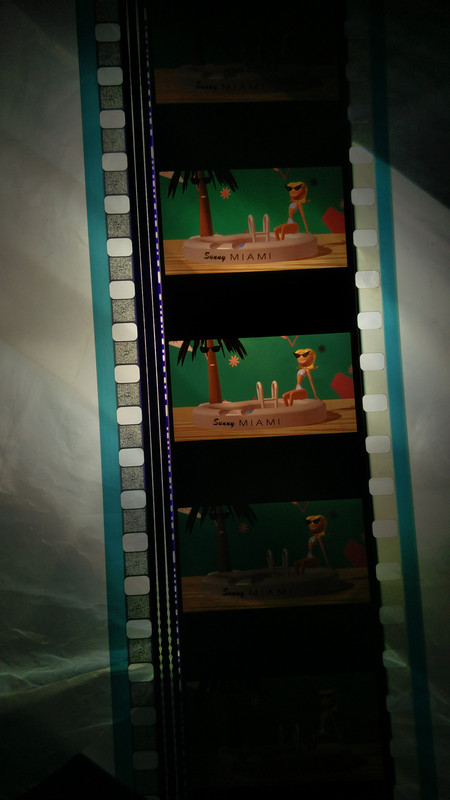 Image done with mobile phone, a LED light and a plastic shopping bag as light Diffusor…

Check the edge coding for the year. If it says 1989, it’s the unedited version.

Yeah, that the shown photo is from the 2003 Version should be obvious, because that one has the edited breast. 😃

Or did did your mention of DD and DTS hits for the 16mm print as well?

If you find a projector from that kind of film, please post video link of it running?

“You’ve got to have faith in the thief” - Lupin III