On the dialog between Bazine Netal and Grummgar, this shot: 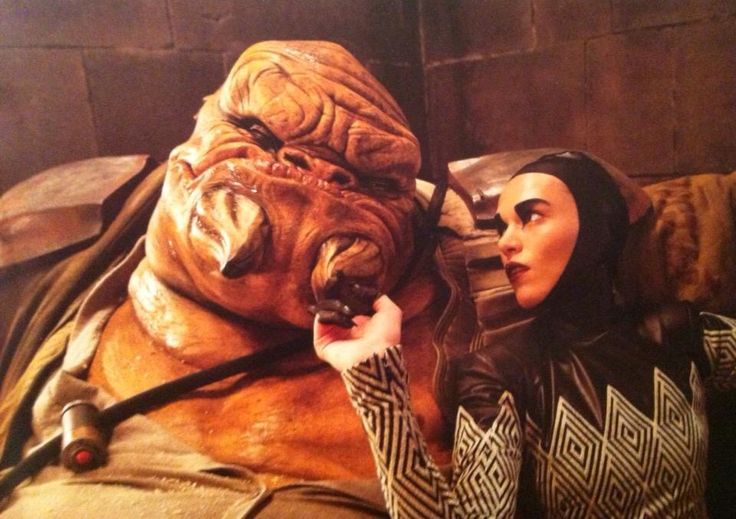 There is dialog along the lines of: BN"Ahhchi mAnnutt" G"growls" in the following TPPs:
TRUEFRENCH/ETERNiTY/ViVi, HQMic/CPG (English), Geen, Spanish, Ac3-GN2, Hindi, iExTV, Tamil, German, HUN and DUBLADO.
Not present in CPG, unmarked/vain, iNFERNO, LiNE-CHeWbacca and Italian.
Not present in BR of English, French dialog mixes.
But is heard in the German BR. (58:10) [NOTE: This source is being reviewed, see next bunch of posts. Might be a mixed source the audio originating from a line-in recording from the theaters]

Thanks for putting to use this horrible collection.

On the BB-8 topic: the Teaser Trailer has the same shot but a different longer BB-8 dialog:
https://www.youtube.com/watch?v=erLk59H86ww (FFW to 0:29) [Note: This was mentioned in the first bunch of posts in this thread. Knew it sounded familiar, but can at least contribute that the dialog is different.]

I’m not hearing any sound there on my copy of the German Blu Ray. I have the collector’s edition version though, it’s possible they changed it for that release. Could you share arip with me via PM? I’d like to see if it’s different.

Interesting. Do you know what country that recording is from, or what format the screening was? (2D, 3D, IMAX, etc.) That might give some insight into which versions have which sound effects.

I do not know. Unfortunately before they got to the torrent stage, someone had played with most of them and there is no way of knowing if the video and audio are from the same source. The video has a Spanish crawl, but the audio is in English. So I don’t know. But then from the camera prints, I can see that the actual film release to theaters internationally had the alien subtitles in the proper language where the BR has burned in English for all languages. So we know there were some tweaks with a single source for the BR.

To make things even more confusing, it looks like the BB-8 “sneeze” that none mentioned and the audible line from Bazine Netal don’t always coincide. Some recordings have one, some have both, some have neither. Interestingly, the German Blu-Ray has both, according to none.

That’s not been proven yet. The file @none checked was from March 22, 2016, which is about 5 weeks before the German blu ray release date. Further, the audio is stereo and appears to be from a streaming source.

I have checked my copy of the German Collector’s Edition Blu Ray and both sounds are absent. I’ve ordered a copy of the initial German release just in case.

Ok, I did a little more investigation on the German version mentioned by @none.

My guess is that someone synced a line recording from the theater with the leaked version of the Blu Ray.

This is from the .nfo file:

I can actually remix this back into the English 7.1 pretty easily. I’m going to wait to see if the actual German Blu Ray has this audio before I share anything though.

So rather than the German Blu-Ray audio, we know that at least one German theatrical version of the film contained the alternate sound effects (if the line-in audio/leaked BD video splice theory is to be believed). Interesting. I’m starting to wonder if these variations were made for international versions. Most of the English theatrical recordings that none listed earlier contain the same sound effects as the English Blu-Ray, whereas the alternate effects are present on many foreign versions.

The English Audio Theatrical recording I have has both of the sounds though.

Video seems to have Spanish Alien Subs. This version’s likely some kind of mish mash as well.

Ah, well, that torpedoes that theory. Very strange that there would be two versions of the film in circulation during its theatrical run even though there weren’t really any differing formats of the film. Star Wars, for instance, had the 35mm/70mm/mono, Attack of the Clones had 35mm/digital, etc., but digital cinema had already long been the standard in the vast majority of theaters by 2015. Could Lucasfilm have just been shipping out two different versions of the DCP at random, or is there a pattern here?

The pattern might be Domestic English verse Foreign English variations. At some point they need to lock the video and audio so the foreign language variations can be made. Some of those foreign language variations might use the English audio and just add language subtitles. So that’s a version A. The Domestic English, version B, depending on scheduling of producing a higher number of units to ship to theaters might permit the production team to made additional changes. So as the trend towards home release is for the removal of the topics identified in this thread, that maybe the US domestic audio mix, and the ones with the sounds came from a foreign version mix. Going to take some digging into the sources to understand better, if it can be figured out where the recordings originated. The problem that is starting to happen is the sites where they came from are starting to disappear. The ones listed in the TPP tread I tried to save the webpage where I learned of them.

Ok, I’ve received my copy of the first version of the German Blu Ray for TFA. I can confirm that it does not have the BB-8 beeps or the Bazine Netal dialogue.

I have created a reconstructed version of the theatrical mix using the German Line recorded audio to supplement the center channel of the English 7.1 DTSHD-MA track.

I’ll be posting a link on the star wars trilogy forums later in the day for anyone interested in this version.