May brain may explode! I forgot about that! Wonder what mix the D theatre is

THIS would probably be the audio to have ..... finding invites to places that might shed more light on things like this are so hard to come by.

I love how cryptic this place is!

Oh DVHS: software isn't too hard...but the hardware sure is.

Yeah, I looked a hardware last month for another reason, and getting it in the UK where it never came out is a nightmare

So I don't know if these images would help anything, but...

So I don't know if these images would help anything, but...

I was thinking helpful if anyone wanted to color correct...

Is this the first DVD you were referring to: 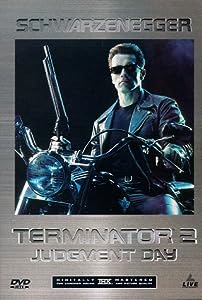 I have this one. The picture is more natural compared to the Ultimate Edition which features heavy contrast boosting and Edge Enhancement. I have listened to the mix a few times and compared it in the past and it seems a little quieter than other releases from memory, but not sure of the specifics. The first release Region A blu-ray is also a lot quieter than the later T2 blu-ray releases, and my HD-DVD sounds (to my ears) the same as the latest T2 blu-rays.

Just out of curiosity, what was the picture and sound quality of the HD version theatrical cut that came with the "Extreme" DVD release? As this was in 2003, it was only playable on a PC. Can it still be played today?

Just out of curiosity, what was the picture and sound quality of the HD version theatrical cut that came with the "Extreme" DVD release? As this was in 2003, it was only playable on a PC. Can it still be played today?

I cannot find my disc, it was a few years back.

<blockquote><p><strong>rockin</strong> said:</p><p>Is this the first DVD you were referring to:</p>

<p>I have this one. The picture is more natural compared to the Ultimate Edition which features heavy contrast boosting and Edge Enhancement. I have listened to the mix a few times and compared it in the past and it seems a little quieter than other releases from memory, but not sure of the specifics. The first release Region A blu-ray is also a lot quieter than the later T2 blu-ray releases, and my HD-DVD sounds (to my ears) the same as the latest T2 blu-rays.</p></blockquote><p> </p>

being keen on having the audio track as close as possible to the theatrical mix of one of my alltime favorite movies, I grabbed a used R1-US-DVD of T2 whose AC3-track indeed sounds quite different to the mix of the first US-Blu-ray from Lionsgate. The most apparent difference of the mix for me is the score which is more present on the surround channels in some quadrophonical style whereas the new mix only has some weird reverb of the score instead. The used echo seems to be dominant in general on the new mix; a good example is the scene where John first meets the T-800 while the flowers turn into a shiny shotgun. ;)

Syncing the AC3-Track to the video of the first US-Blu-ray is indeed a nightmare! When you have it synchronized at the beginning, the DVD-mix lags about 600ms behind the video at the end of the movie, which seems to be a constant drift. What makes it even more difficult to sync that beast, is the fact that you can't stretch the audio simply to the length of the old one because there is also a simple offset included before the movie starts due to some longer pause between the label sound and the movie. So you need some distinctive points within the waveform for orientation, for example it is difficult (at least for me) to determine the beginning of the movie in the waveform since it's faded in. The first "sceleton crush" is not bad for synchronization purposes but it's really some task, puh.

Has anyone already successfully synchronized this thing to any Blu-ray-release?

Oddly, Terminator 2 is not the only movie where I struggle to get an old AC3-source synced to the video. With Fight Club, I face the same issue and I wonder why and how this is possible. Despite the pulldown thing used for NTSC-sourced DVDs, the nominal frame rate and thus length should be exactly the same as the Blu-ray's with it's 24/1.001fps - encoding. Since I greatly assume that the DVD is perfectly in sync by itself, I don't really get how such drifts (which seem to be around 0,001%) occur. If both nominal frame rates (DVD vs. BD) are the same, one of the two would have to lack some frames.

Maybe someone can enlighten me here.

Furthermore, has anyone had the chance in the meantime to compare the AC3-track of any of the LaserDiscs floating around in addition?

Someone here sent me a synced version about a couple or more years ago. Can't remember whom thought. It's almost in sync all the way. Only drift in a few moments.

Maybe someone can enlighten me here.

Having sincronyzing many audio tracks in the past two years (from BD/DVD/LD/VHS) I always use video as reference - because it's easy and a certain audio track *should* be in sync with its own video track...

Well, sometime it is not true, and one audio track is out of sync (for few dozen ms usually) in a way, while another in the other way...

Plus, add that almost everytime different versions have few frames added/missing; in that case, I leave the audio track in sync with video, and when frame is missing, I delete the related audio, while when there is an added frame, I add a small empty audio bit, or repeat the previous frame's audio if it sounds good; note that each frame is only a bit more than 41ms, and usually this occurs at a scene change, so that empty bit of audio is usually unnoticeable.

...and it's an hard and time-consuming task, in particular if you have to "cut&paste" audio parts from different versions...

Many thanks for the elaborate explanation, Laserdisc Master.

So it is as much hassle as I was afraid it would be .. Yeah, would have been too easy, I was already surprised that I could flawlessly sync the THX-certified (not that would mean anything, but it has in fact a bit more dynamic range than the BD mix) DVD-audio of Titanic to the 3D picture of the Blu-ray on the first try.

Is there any good reason for frames to be missing at all? I mean, don't they scan the source material frame by frame?

When you compare the video - which tool(s) do you use for that?

It would be great if there was a tool which would be able to compare two totally different video streams for its content frame by frame and detect any duplicates or missing frames.

I use avisynth within virtualdub; both free software, and, despite the fact the former is quite hard to understand at the beginning, now I will not live without it!

There is a script that (tries to) detect scene change; after that, you have a list of each version scene change frame numbers, then you could compare them to find out eventual frame discrepancy; but it's not very precise, and it's still better to do it "by hand"!

600ms=15 frames, and probably there are in groups of two or three (usually one at a scene's end, and the other at the beginning of the next one)... I stack the two (or more) versions one above the other(s), then I look for frames differences; even if it's time consuming, it's maybe the faster and more precise way to do it - at least using avisynth.

if you can't sync using the waveform, use the video. then clean up the edit points.

Im not an expert with all these versions and audio tracks. Is there a better track (5.1 or 2.0) for the DC (153min, preferably fitting to the Studio Canal EU BD (=Best PQ)) than the 5.1 track from that Blu-ray?

I was going to make a thread about this when I stumbled upon this one. I too have been searching for the CDS mix and ended up getting a hold of the original LIVE 1998 R1 DVD. While it does sound great how can we be sure this is the CDS mix? I've read around and it has been claimed to be it but I was under the impression it would use the same sound effects from the official theatrical trailer:

I know it's just a compressed mp3 for YouTube but there is something about the sound in that trailer that feels more dynamic and explosive even if it may not be natural or full of fidelity. The audio for that trailer very well could have just been made specifically for a promo but I like to believe the real CDS mix would sound like that. Listen to the shotgun blasts, the explosions, and especially the shots fired by the T-1000 at 1:36 - they sound like they have more punch than what is in the actual Live DVD or any other release.

On a side note, I noticed there are 2 versions of the '98 R1 DVD - a snapcase with LIVE on the side bottom and lower right bottom of the front and a plastic standard DVD case with ARTISAN in place. Both come with the exact same disc catalog # 60441. I wasn't sure if maybe one release may have been different than the other but it turns out the only difference is the case.

Also, here is a fun read regarding the sound design of the film:

I have a great memory for colour and sound, and I still remember the gunshots in the the lift scene to be like the trailer, not the crappy "silenced" ones on the Live dvd

I have a great memory for colour and sound, and I still remember the gunshots in the the lift scene to be like the trailer, not the crappy "silenced" ones on the Live dvd

Great, I was hoping I wasn't the only one that thought that. But this makes me wonder... what was disclord referencing when he spoke of the CDS mix being on the Artisan Live R1 DVD?

The Artisan Live mix seems to sound like all of the others and not what is heard in the theatrical trailer. Do any of the older laserdisc copies use the CDS master in the Dolby Stereo/Surround tracks?

If it turns out that the CDS mix actually wasn't used on any of the laserdiscs or DVDs then it would take hunting down the actual film of the CDS print and the decoder to go along with it. Nothing is impossible but that sure sounds like quite a feat. I would give much to see the film with the original CDS mix sync'd to a 1080p theatrical cut on Blu-Ray!

I can bid on the theatrical trailer if no one here is already and would like to help in any way I can.