Beauty and the beast

The Little Mermaid had the priest’s knee, Aladdin had some minor tweaks to some of the CG, and I think some of the earlier movies had some paint or some cuts?

Lucked into a copy of The Many Adventures of Winnie-The-Pooh Friendship Edition for $1 at my church rummage sale and it looks pretty much untouched and uncropped, unlike the Blu-Ray which I have in my collection. I’ll take a closer look as soon as I can.

Besides The Lion King and Who Framed Roger Rabbit, what other Disney films had shots altered for the DVD/Blu-ray releases?

Alice in Wonderland too (the water)

Lucked into a copy of The Many Adventures of Winnie-The-Pooh Friendship Edition for $1 at my church rummage sale and it looks pretty much untouched and uncropped, unlike the Blu-Ray which I have in my collection. I’ll take a closer look as soon as I can.

Return of Jafar believe it or not has a shot edited on DVD/BD, but is unaltered on the VHS/LD releases.

Besides The Lion King and Who Framed Roger Rabbit, what other Disney films had shots altered for the DVD/Blu-ray releases?

Alice in Wonderland too (the water)

Which shot of the water? I recently did a frame-by-frame comparison of the Blu-Ray against the 2000 Gold DVD, and could not spot any difference in the rippling water before Alice first sees the White Rabbit. Is there a different scene that people are talking about? Maybe the Walrus & Carpenter scene? I didn’t check that one.

Is there a comparison somewhere online with screenshots that haven’t been deleted? My greatest frustration when trying to find comparisons in 2018 is the endless number of missing screenshots here and on other forums.

It’s always interesting trying to see what is the “correct” version of these Disney films. I caught a remaster on the Disney Channel on day and I thought I had to find the originals.

So the Anniversary BD of Cinderella that is now out is the same HD transfer all over again.

Word has it there is a 4k streaming version that will become available, which is ironic since they’ve already scrubbed out any fine detail that would have made 4k better… unless it’s a new transfer(?)

Does anyone know if a new LD rip, improving on Molly’s, ever came about?

No, but an updated rip would be nice until the 35mm scan is released.

By the way, could you or anyone send me Molly’s rip? It used to be all over the web, including fanres, but I lost my files and all the links I found are now dead 😦

I couldn’t watch Molly’s release. The source it came from was good, but the quality of the release was too low for me to stick with.
I don’t know anywhere you can still get it.

So looks like Disney+ is already available as a beta version on Netherlands. Could anyone check for updates?
Is “Three Little Pigs” the original version or the “new” one without the jew disguise? How about Melody Time?
Does any classic have a different master than its BD counterpart? Or maybe open-matte versions?

My equipment was terrible. 😦

I have some bits of 35mm from The Little Mermaid with film code dated 1990. So maybe a trailer (or also bits of actual release as well?) from the UK? Anyway, it should be before the scanned and loaded it into computers to fix up for the 1997 re-release (unless they really used almost decade old film stock, which seems not too likely, unless they did that for trailers at times).

The colors seem pretty intense! The print also gets pretty dark for dark regions.
I have no xenon bulb now so all I could do was try to view with a daylight incandescent bulb (maybe around 6000k?) on a slide sorter tray, not sure that gives a perfect impression, but whatever for now, based on that:

Granted, it’s hard to yet really compare, since it’s hard to stare at calibrated HDTV and lit film at the same time (and it may not really have been lit quit the right way either), but for what I could do with that for now, my feeling is that:

Granted, I don’t know how those VHS and laserdisc frames were captured, the capture process itself could potentially distort things itself, but as shown there, neither than VHS NOR Laserdisc look to have particularly accurate look compared to the actual film itself. And there is perhaps a reason NTSC was called Never The Same Color Twice (then again, I think that said those were from a Danish release, which probably means PAL, but whatever the colors still seem nothing like the film at all).

It’s also tricky since the colors do change from scene to scene as they lit it differently and I don’t necessarily have the scenes to match the ones on the websites above, but I do have a couple that are the same and a few close.

Anyway, the bottom frames, the newest blu-ray 2019, actually do seem in some ways actually maybe heading towards the most accurate overall, but not entirely. Sort of like some mix of the bottom three frames (2006 Platinum DVD, 2013 Diamond blu-ray , 2019 Signature blu-ray) plus that stuff that simply looks like none of them would be most accurate.

That 2013 release actually seems to more often get her sea shells closer to the correct color I think, the 2019 often makes them a bit too dark and a bit too saturated, although in a few scenes, the 2019 is more accurate. Sometimes the 2019 maybe makes her skin a touch too saturated and a trace heading towards a wrong shade. OTOH, the 2019 generally seems to make her tail more vibrant and rich than most of the other versions, which is more accurate, if sometimes STILL not intense and vibrant enough (these 35mm bits REALLY pop with the color saturation)! The 2013 sometimes makes her tail not vibrant enough or certain greenish elements a trace too blue perhaps. The 2006 makes her tail vibrant too fairly often, but sometimes, maybe fairly often, gets maybe a bit too greenish.

None of them seem to get Flounder as deeply saturated as he seems to be in the film at times and many skew too pure yellowish (too much towards a lighter, bluer yellow).

In some scenes, Sebastian’s red is absolutely glowing in the film, none of the home release clips shown on that website come close to matching the brilliance and saturation of his red in some of the scenes as seen on film.

It may well be that some of the colors in this film are also simply beyond not just NTSC/PAL colors but beyond sRGB/REC709 color gamut. I’ll have to compare to the wide gamut UHD and see if that brings some of them to the film’s intensity.

In the jellyfish scene shown on the website (http://images6.fanpop.com/image/forum/228000/228686_1567725027549_full.png), none of them make that scene look correct.
The 2013 blu-ray has the background above her head too blue-skewed and her tail is not nearly vibrant enough and a touch too blue-skewed. Only the 2019 blu even begins to get her tail vibrant enough, but still falls short of the film. None of them come even wildly close to how popping beyond popping intense red Sebastian is in the film there. On the film the jellyfish looks vaguely like the top half of the 1999 DVD combined with the bottom half of the it on the 2019 blu, sort of.

Regarding where she pops up to meet the Albatross and is with Flounder, I don’t quite have it to where he holds the fork/dinglehopper [EDIT: do have that but not compared yet], but near that it seems like (assuming the rendering of the way they colored the scene didn’t change more than I think between the part I have and what is shown on the website):
VHS and Laserdisc have very poor colors compared to the real film all around.

None make flounder quite the right shade, none saturated enough.

None quite seem to have the shade or saturation of her shells quite a match.

None seem to quite have the color of the sky right, maybe the bottom two are getting closer although only the 2006 has some of the extra subtle alternate shades apparent in the film, not that it gets the blue part right.

The VHS, Laserdisc, 1999 DVD all seem to get the sky rather wrong.

But take this with a grain of salt (other than for sure the colors can be really intensely saturated! I think some of those saying the digital home media releases hyped up the colors and the film was much duller are totally wrong). It also seems very likely the 2019 does make her shells often too saturated and dark.

The 2006 likely often goes too green to some degree or another and the 2013 likely a bit too blue, although this stuff is a little more dicey without a proper xenon projection.

The Little Mermaid had the priest’s knee, Aladdin had some minor tweaks to some of the CG, and I think some of the earlier movies had some paint or some cuts?

Also some bits of paint clean-up and such at the least starting in 1997. Possibly more. In 1997 they scanned it all into computers, every frame, and then touched up paint crawl and dirt. Did the colors also get changed during that process? Maybe, not sure.

one curious thing regarding Sleeping Beauty is that the home releases, for the frame where all the birds and animals are sitting on the tree branch as she looks on with her basket also resting on the branch seems to have the leftmost bird blue and then next one green but I see on a photo of a print (not sure when it is from, but it looks to be not more recent than mid-70s) that it seems to have a the leftmost bird green and then the next one blue, the opposite of the home releases. Now it is faded, and that leftmost one really looks more like olive yellow, i wouldn’t think it’s so faded as to make blue end up looking more like green and green like blue, although I suppose, maybe it’s possible, but it seems unlikely.

You mean this one? 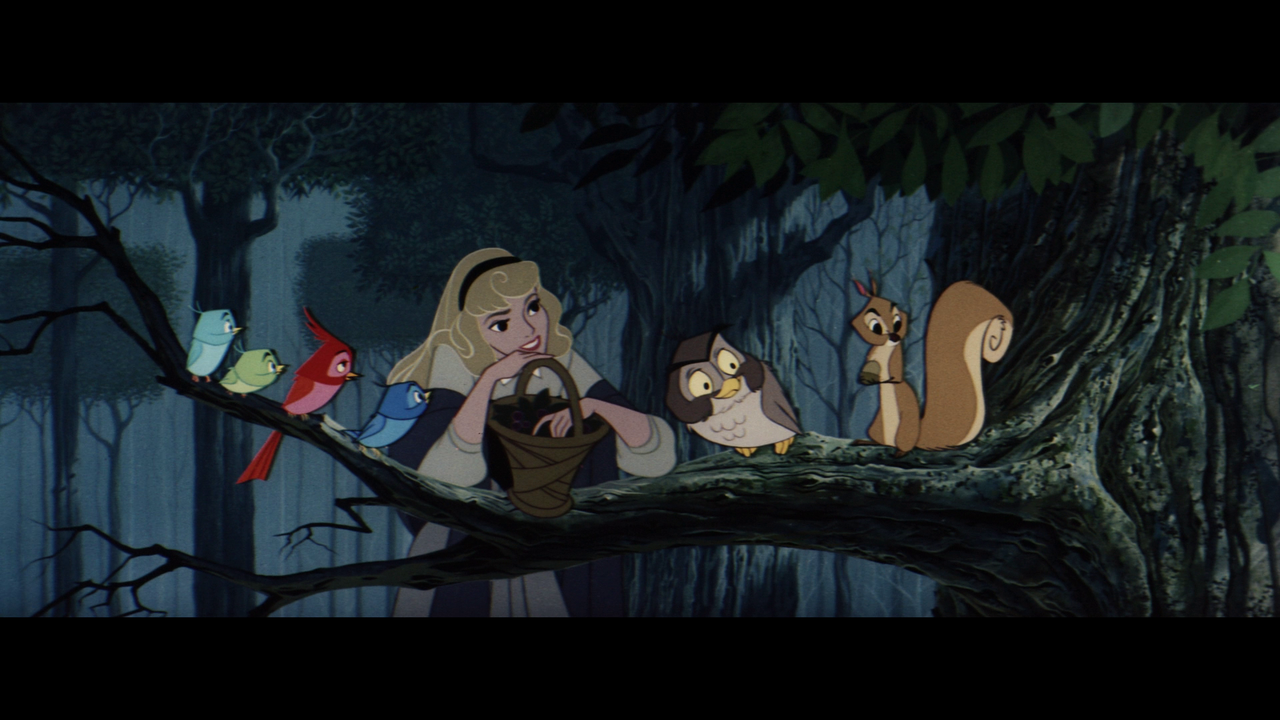 Just like the rest of the film the Blu-ray is terribly over-saturated, but the left bird looks blue and the next one green to me in both versions: 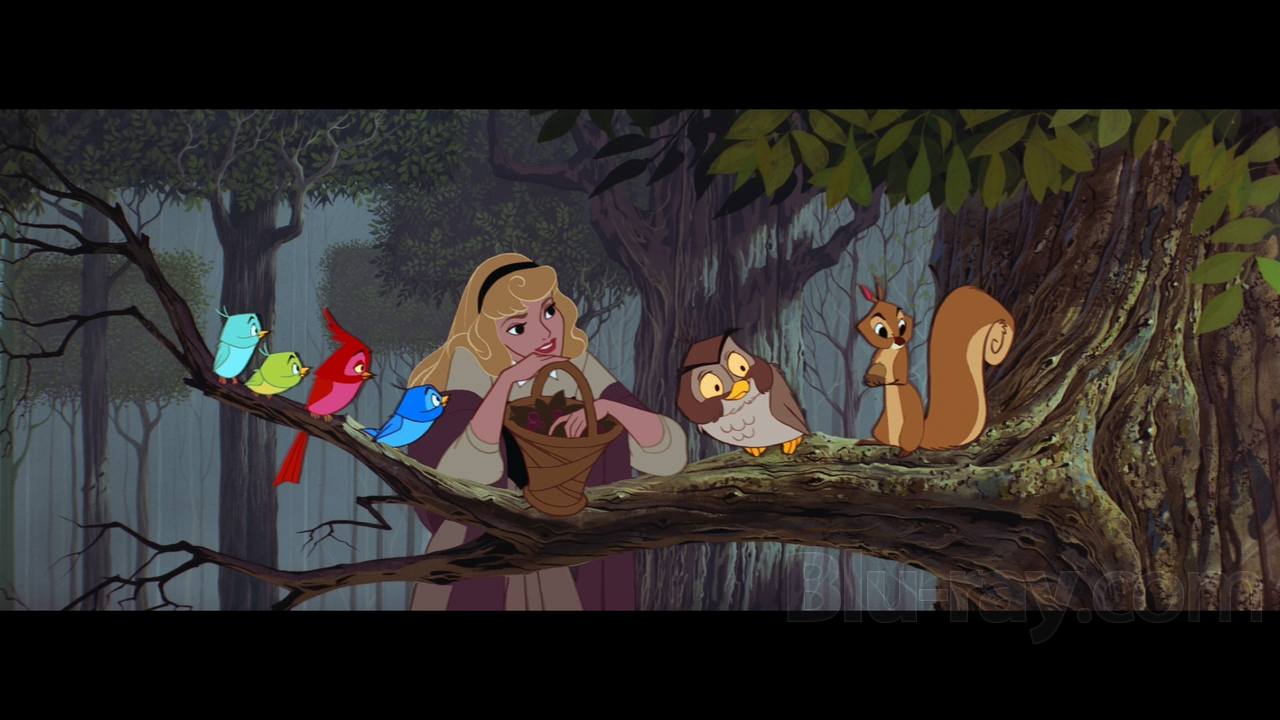 EDIT: Just recognized what you meant: They’re switching places in the next shot. But that’s a goof, not a restoration error. 😉 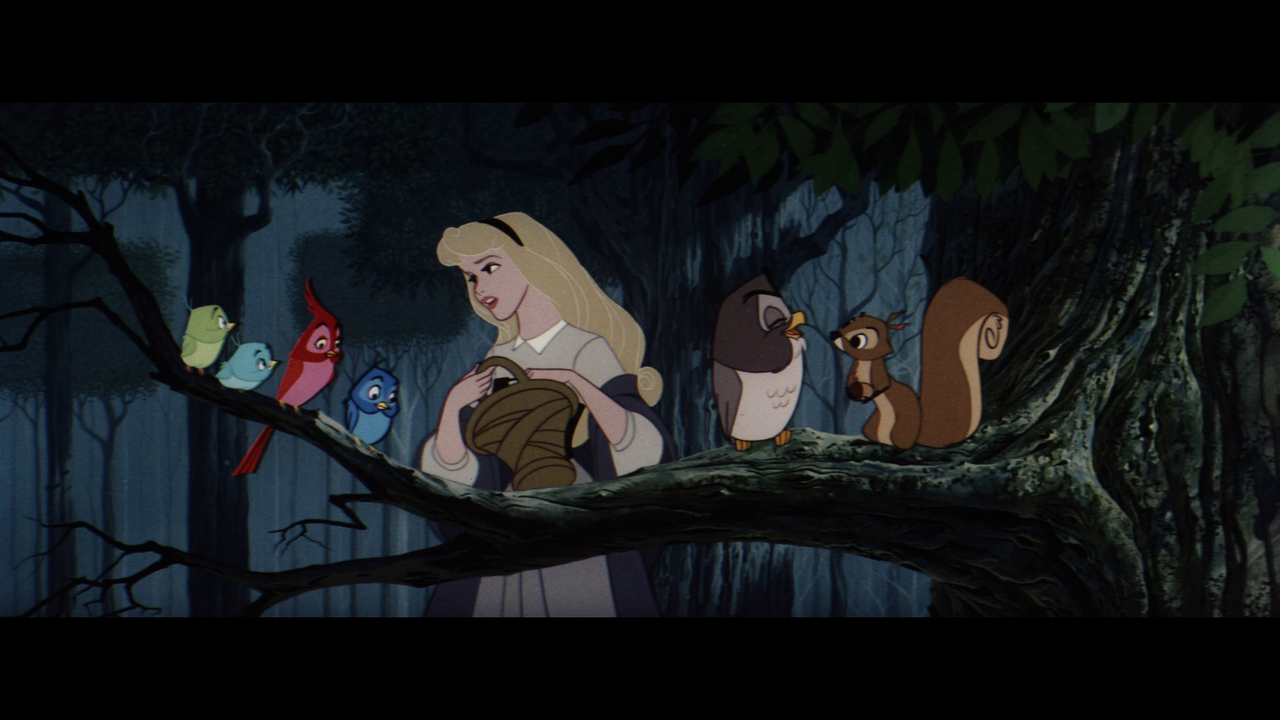 Ah, so was it a mistake in the original cartoon then? and not a mistake in some early maybe mid to late 1980s restoration carried forward then?

The one other different I noted was the frame I saw had the owl with white instead of yellow eyes. But perhaps that is also some original mistake only apparent in a few frames?

I wanted to point out real quick that all of the downloadable screenshot comparisons are now useless as they have photobucket watermarks on them. Also, has anyone heard anything about a new release for Sword in the Stone?

Don’t know if Aristocats HDTV version is better than BD, probably not…

The aristocats HDTV is miles better than the Bluray!

It retains the grain!

There is a custom BD-50 of it in circulation.

Does anyone have this. please?

Don’t know if Aristocats HDTV version is better than BD, probably not…

The aristocats HDTV is miles better than the Bluray!

It retains the grain!

There is a custom BD-50 of it in circulation.

Does anyone have this. please?

I’d like to know where to find this too

Ugh I think I’ve never seen some of these look so good
https://youtu.be/_dOIASvrMnw

Ugh I think I’ve never seen some of these look so good
https://youtu.be/_dOIASvrMnw

Video is not available? 😦

Thank you for this! Wow these look amazing!