I guess I should update this since it’s been… a decade?

This is just the Original Trilogy.

I found a “Faces” VHS set somewhere in the last decade, I have that too.

I’d like to see the custom cases once you’re finished with them.

Now I’m curious what’s in the prequel set and the bonus features set.

Now I’m curious what’s in the prequel set and the bonus features set.

I bought the Collectors Laserdisc from 1995. Of the trilogy from Japan and the new 2020 Special Edition.
I have far too many versions including every American VHS release of the Star Wars trilogy on VHS, The First issue Definitive and US faces laserdisc, the Japan Definitive Collection. The Special Widescreen Collection. Original issue and re-issue of the pan and scan US release on Laserdisc. The CAV pan and scan for Star Wars and Empire on LD, the special edition on 1997 US LD. Phantom Menace on Japan LD. The Japan Special Collection CAV LD issues. 2011 blu ray, 2004 DVD set. Phantom Menace, Attack of the Clones and Revenge of the Sith 2 DVD sets NTSC North America releases. I also have 35mm trailers for a re-issue of Empire and theatrical return of the jedi release flat not cinemascope. And some 70mm film frames from Willits Designs.

I’ll probably buy the next one too.

plus LD not in picture

I managed to find that 1997 1 of 40,000 set sealed a few years back at a thrift store. I opened it like an idiot thinking it was re-sealed at some point because of how gross the shrink wrap was. To my horror I come across each individual tape sealed in the box. Big yikes my guy. The omega yikes came when I decided “screw it” and opened them and watched them. RIP. I baby it more than my 1992 Letterbox Collection though because man is it pristine.

Also nice collection. It puts mine to shame.

My original copies were all taped off of pay cable when I was a kid. I was given all three on VHS for Christmas in the mid 90’s. I bought a used VHS copy of Star Wars a few years ago for $1 to replace my worm out copy. I finally bought the Blu-ray OT box in 2018 just so I could download the Despecialized editions.

I bought the DVDs and then Disney+. 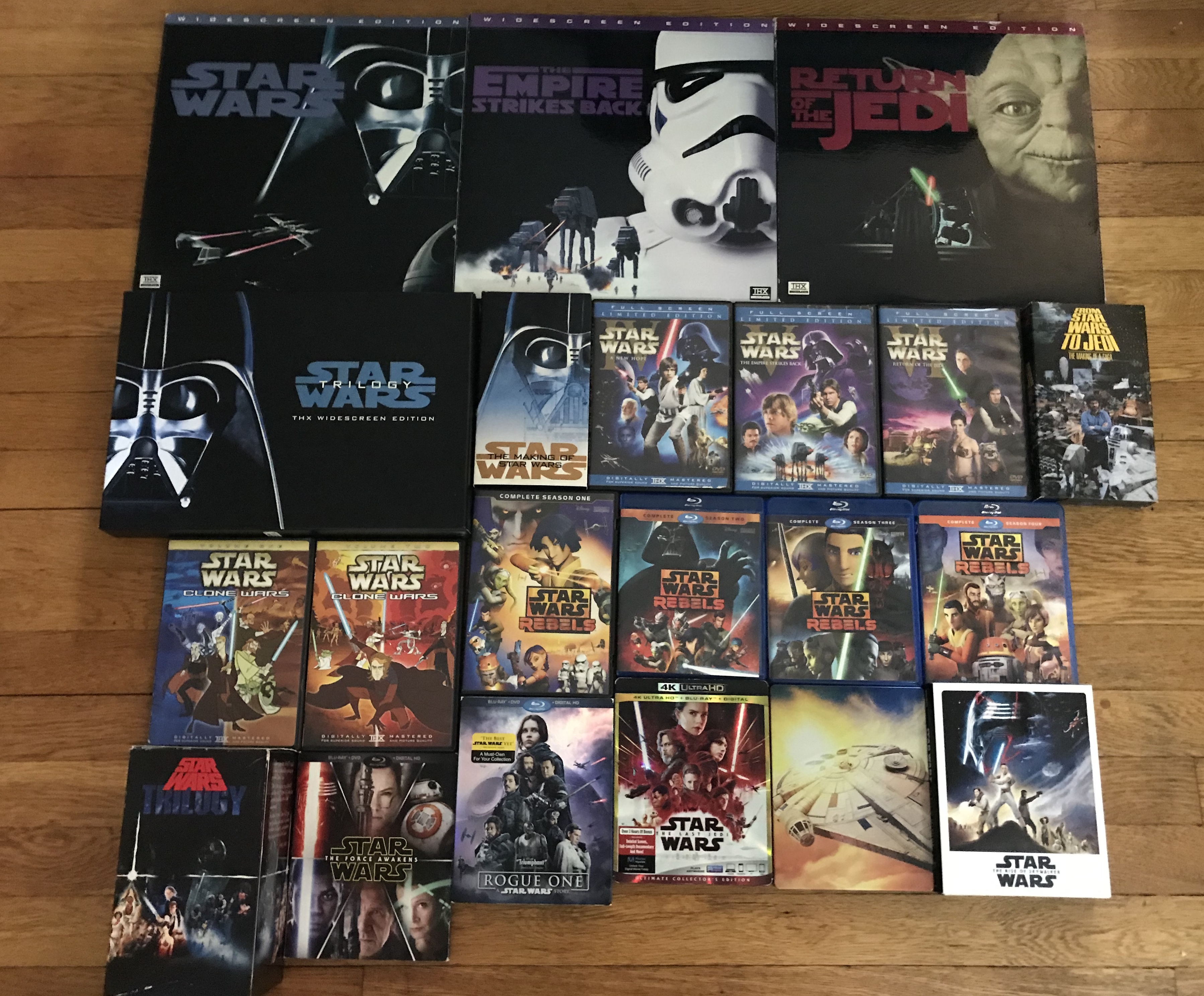 I finalized what copies of the films I’m keeping, which is everything in the photo. I decided to be rid of the Prequels, Special Editions and Ewok films. I don’t plan on buying any further Star Wars videos, ever.

The Solo copy pictured is the Best Buy 4K Steelbook.

I have to say its become almost an unhealthy obsession like gambling. I really need to stop buying these, at least i never went so far down the rabbit hole i bought VHD discs. But i will complete my collection of Original OT releases from japan if not the special edition, or the second much more expensive definitive collection box. Don’t see a need to get making of Star Wars or Classic Creatures on LD either because i have the VHS releases. I only now need Star Wars 83, empire 84, empire 86 and star wars 86. for a complete collection of the movies from japan.

I’ve bought a lot of Star Wars movies in my day lol. I may’ve owned TPM and AOTC on VHS as well, but I don’t remember.

I also plan on owning the OOT on VHS one day.

UPDATE: I now own the 1995 widescreen editions of the OOT on VHS.

I was going through my collection and apparently i have all 3 Pal UK pan and scan releases for the Star Wars trilogy. I just assumed i only had Empire Strikes back and return of the jedi.
I don’t have a pal player. But i had someone else play and check the discs Star wars and empire are rotters, and the last time i checked return of the jedi was rot free. Jedi came from a sealed copy i myself opened and is mint. Empire and Star Wars are used condition.
I also found my CED copies and Return of the Jedi is in a white caddy.
Pulled out my copy of Phantom Menace and it is as new factory mint but not sealed anymore. Just opened and watched once. Just like my copies of the Special Collections were previously sealed copies.
Still trying to find a 1982 or 1983 pressing of the original Laserdisc release from USA without laser rot, since both copies exhibit it to varying degrees one pressed in Japan and the other USA, i’m beginning to believe it does not exist.

I haven’t played my Evergreen disc yet so i cannot say whether that is the same master as the original USA pressing just reissued in Japan with digital audio. the 1992 edition, 1985 and, 1982/83 are all different masters on the US editions.

Edit addendum:
So i pulled out my Copy of Return of the Jedi 1986 pan and scan from Japan and it had succumbed to laser rot So i had to buy another copy. And i also got star wars 83 and empire 84 from Japan.

JEDIT: I decided to keep the CBS/FOX Laserdiscs instead of the FOX Video VHS.

I no longer have the VHS sets or older DVDs, as I recently downsized my collection.

I haven’t picked up Solo or TROS yet, but I mean to grab the BDs before the year’s end.

I can’t believe I haven’t contributed to this list yet. I thought for sure I had, but… nope!

My first copies were technically pirated: The 1984 CBS premiere of Star Wars taped onto VHS, and then copies of Empire and Jedi taped off cable from a friend who had it (our family didn’t get cable until much later)

My second copies were… ALSO pirated: I rented the videos from a rental store, and used an old VCR to dub them.

Fourth copies: The Widescreen VHS box set with the hologram cover (one of my first eBay purchases, too).

The Phantom Menace on Widescreen VHS

The Phantom Menace on DVD

Attack of the Clones on DVD

Revenge of the Sith on DVD

The Force Awakens on blu-ray

Rogue One on blu-ray

The Rise of Skywalker on blu-ray (Target exclusive)

GOUT is the unfortunate acronym the community sort of accepted and kept propagating in the mid 2000s in reference to the 2006 DVDs that had the laserdisc masters included on a bonus disc. It stands for “George’s Original Unaltered Trilogy.”

Apparently it was originally kind of a dumb joke but then people started using it unironically and then it became an accepted sync-standard for restorationists and preservationists. It’s on its way out now though since there are new restorations that don’t base their length and sync on those old laserdisc masters anymore.

So, how do we call the hypothetical official release with a new 4K scan of the theatrical version of the Original Trilogy?

That would be the only future release that I can’t wait to buy. I won’t buy any new fancy holovrsensotron release if it’s not George’s Original Unaltered Trilogy!

If/when an official restoration of the theatrical versions is ever put on Disney+, we’ll probably just call them just that: The theatrical versions. I think at that point, if it ever happens, they’ll be so ubiquitous and easily accessible that there won’t be the need for a nickname. If I had to guess, they’d become “the originals” for short.