The cinematographer of Star Wars (1977) just passed away, aged 99. He was also the DP for Dr. Strangelove, Frenzy, Flash Gordon among others.

I know people tend to think of Ep iv of not being very photographically intereting, but I disagree. There are a lot of claustrophobic sets with ceilings (thus blocking any light setups from above) and lights coming from the walls... And it all looks so natural. You will be missed!

I link to this here notification of his shuttle departing this mortal coil.

I've always loved the Death Star interiors and wished they could be pushed even further.

There is clearly a line of evolution between the war room in Doctor Strangelove and the those environments.

Yeah, I must agree with the natural look of much of the Tatooine locations (and sets); it's what continues to set it apart from everything else out there.

Kitbashed
Essays, videos and thoughts on the inspiration behind Star Wars.

If anything it's ROTJ thats the cheap and cheerful OT film.

The one Death Star corridor they bothered to make looked so bad (in comparison) it pointedly features in much of the deleted scenes. It's more than just the design work it's the whole feeling of epic scale conveyed by the lighting that makes one a classic scene and the other a deleted scene.

The gigantic scale of the ANH sets and the way they were photographed is complimented by the design.

The corridors and conference chamber look like they belong in the same place even though only a few elements overlap.

The same can not be said for the Death Star interiors in ROTJ, where re-used sets (like the Executor bridge) don't look anything like as good as they did in previous films.

Ironically that set contains parts of the Hanger Trooper Station and those elements actually look better in the ESB set than they do in the original film (nothing to do with Gilbert's work there he didn't paint the thing red the first time).

I am not a fan of his lighting in ANH (too bright in my opinion). I like Peter Suschitzky's and Alan Hume's work on ESB and ROTJ better (it is much darker). 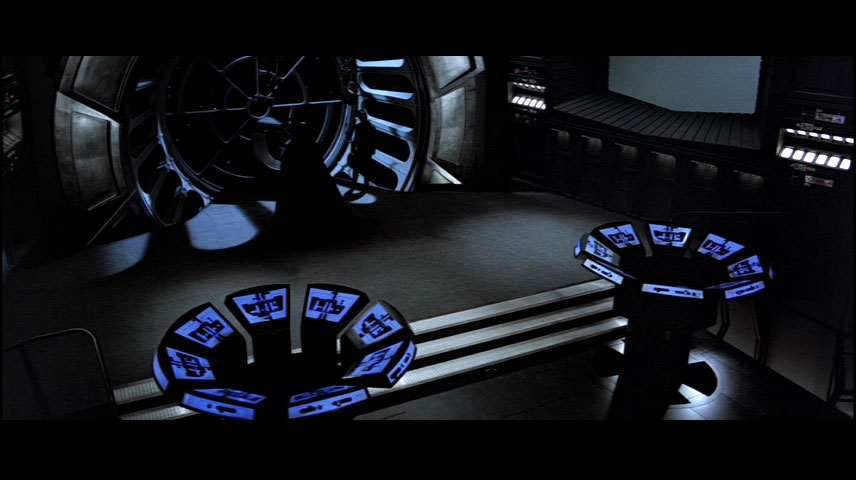 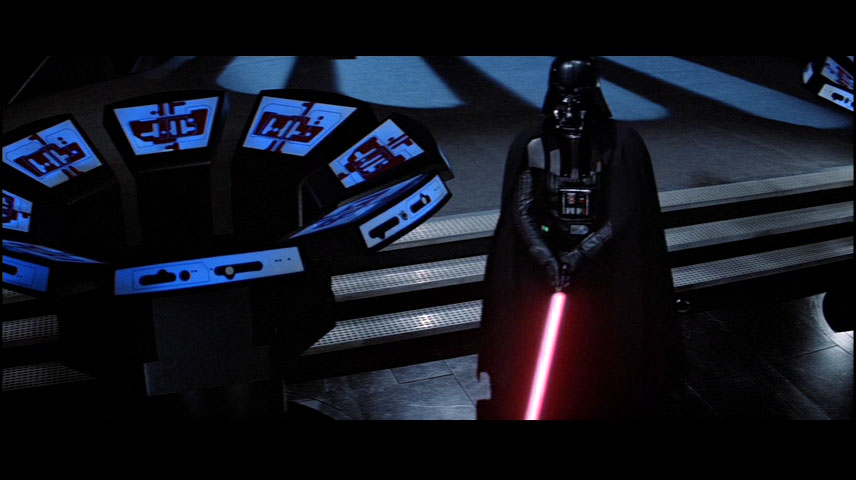 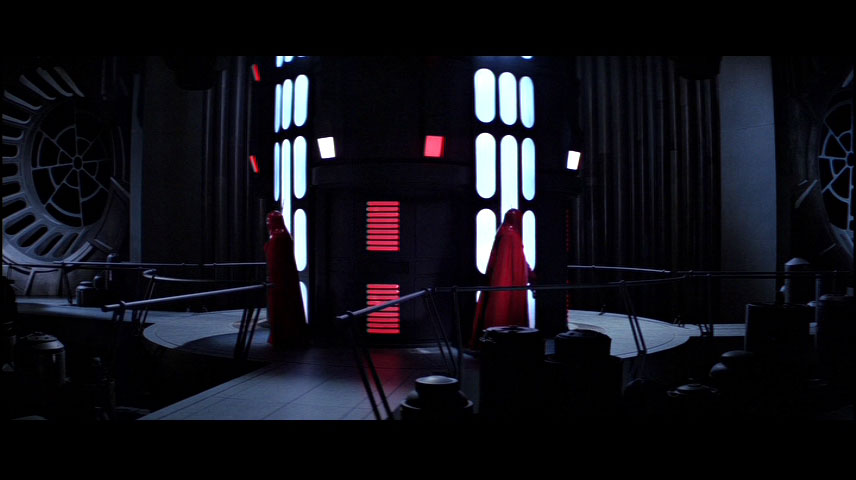 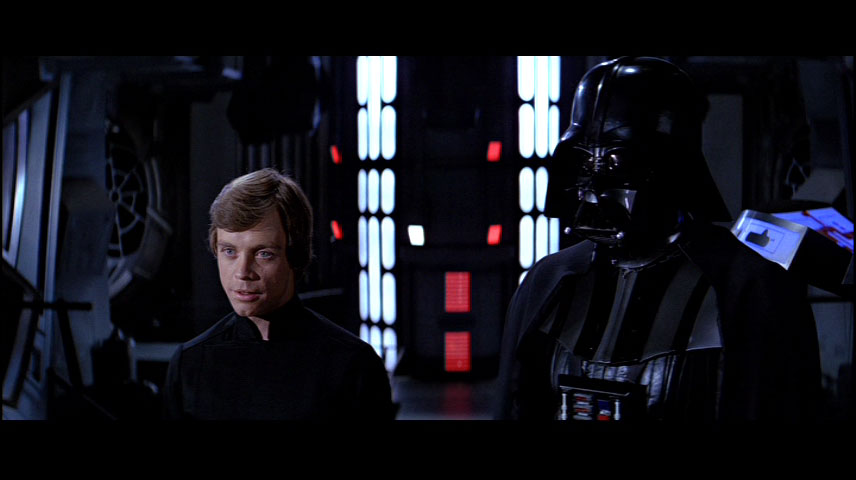 Well one of few shots I really like in ANH is this shot of conference room.

It's more the colour and the UV glow than the design which is more power station than throne room (which made narrative sense in ESB).

Jabba's Throne room is a bit better but it still has the cheapening effect of being dressed with Tauntaun props.

Even the enormous and impressive hanger set is let down by the need to be augmented by unavoidably painterly matte frames.

This just feels more real (even with the painting) 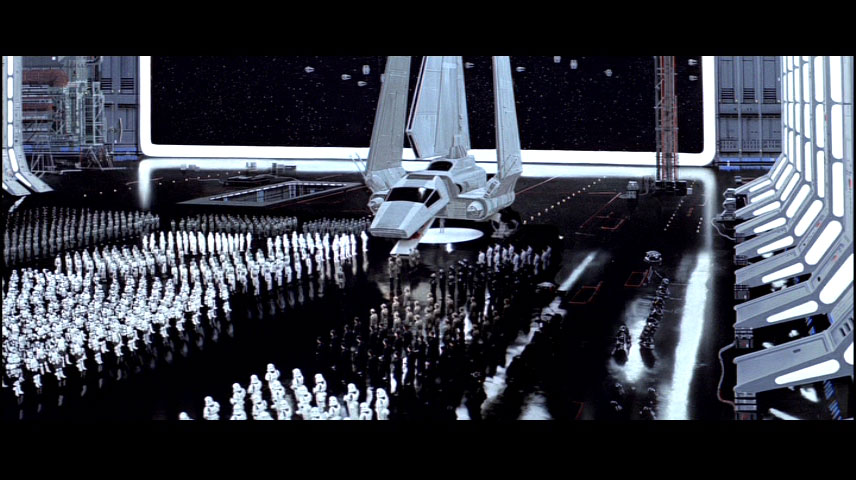 And it feels like part of the same place as all the other sets.

Didn't Taylor and Lucas disagree over how the movie should be shot?

Ahhh, the days before the Yes Men.

Forgot that he shot Dr. Strangelove (which featured James Earl Jones as one of the bomber pilots). Never considered the parallels between the war room and the Death Star interiors.

A big reason Lucas hired him was because of his work on The Dam Busters, the climactic sequence of which George modeled the trench run after.

One story I remember hearing is that during the initial Tatooine scenes, George Lucas wanted to put a diffusion filter in front of the lens to have that soft diffused look that was popular back then (think Superman). Taylor thought the film should have a sharper look and didn't like the idea. Apparently George got his way... But fastforward 30 years and Lucas asked Lowry to 'sharpen' those affected scenes.

This just feels more real (even with the paining)

Well these two shots both contain paintings. And to me they both look great.

This may be a bit off-topic, but the augmented ANH hangar from SE (the picture above) looks way better than the original version.

It is one of the few SE tweaks that works, the painting contrast levels now match the set.

For me personally, I find the ANH hanger more realistic and less like a sound stage with a painting around it.

The Rebel hanger in ROTJ is very fake because it's more painting than set/model.

I mentioned these observations only because the OP seemed to think that the consensus was against the cinematic qualities of the first film.

I think the first two films are fine but Jedi looks (like a lot of sequels of the time) like a cheaper film (even though it's just shy of three times more expensive).

Depends on what you personally consider "cheaper". For me, much of the updated Tatooine shots now look much more magical and feel like it is actually "a galaxy far far away" than it did in original shots. One notable example is the new Ben's hut (probably one of my favourite changes in ANH). 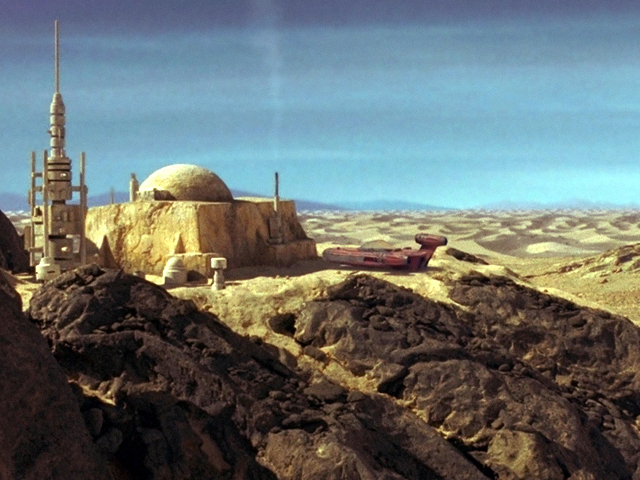 And here is one of the original shots. Mind that it is not the speeder and its shadow (ie special effects), but the surrounding itself that makes it look bad to me.

Yes I know, sorry. I am unable to find an alternative link. It is basically the shot of Luke's speeder approaching Mos Eisley. You can find it somewhere in here: http://www.dvdactive.com/editorial/articles/star-wars-the-changes-part-one.html

Star Wars is one of the most perfectly shot in films ever, in my opinion, along with Dr. Strangelove. I'm glad he lived so long.

Depends on what you personally consider "cheaper"... One notable example is the new Ben's hut (probably one of my favourite changes in ANH).

Personally I prefer the original shot that made it look like they had a real building and a real vehicle (which the did) which matches the beautifully photographed interior set (which it does) to the new shot which looks like a toy diorama.

Depends on what you personally consider "cheaper"... One notable example is the new Ben's hut (probably one of my favourite changes in ANH).

Personally I prefer the original shot that made it look like they had a real building and a real vehicle (which the did) which matches the beautifully photographed interior set (which it does) to the new shot which looks like a toy diorama.

We have a very different taste when it comes visual aspects I guess.

Side note: I believe the speeder in original shot was actually inserted through SFX.

It was a physical prop and the light was really hitting it from the same direction as the building ergo it felt real to me.

The newer version is a pretty picture but it doesn't feel realistic.

The newer version is a pretty picture but it doesn't feel realistic.

Well that is the problem I have with most of the original Tatooine shots. They look "ugly realistic" when they could be "beautiful realistic". The particular shot we are talking about is very dull. There is nothing in the scene but the speeder prop. And the skies in the background look absolutely awful (they caught some very ugly tone). That pretty much applies for many of other original shots.

It is just sad because the desert can be visually very beautiful place and yet they somehow filmed the worst of it. I understand they had drastic budget constraints and stormy weather. So yes, I love the visual updates in SE. They make the whole thing more beautiful and magical to me.

It's all down to taste, but I prefer the original,....it blends in to the surrounding scenes, I do agree that the original could be improved.

EDIT: The SE one looks like the Landspeeder had to be reversed into the shot,.....it looks to forced & unnatural

Just needs a few touches probably. The forground and building look great. I had a play with the shot for 1/2 an hour...

^ Background probably suggests he's not a hermit but it was the first half decent shot of tunisia I foundon google images. Added a couple of bits of tech from Luke's house on the left. But even that's not really needed.

Matte paintings where used for a reason. To add scale and glamour to shots that couldn't be achieved (Or couldn't be paid for) any other way. God knows why Lucas insits on throwing away the whole practical shot and crating a new fake one.

I have an easier time believing Obi Wan lives in something most people would mistake for an abandoned structure. Not to mention he lives out where most people have the sense not to venture into, even on a nice sunny day.

Smoke from the chimney, and a vaporator on the porch is advertising that a Jedi in hiding wouldn't want.

Tatooine isn't a nice place to live, and the cinematography, intentionally or not reflects that.

Theres a reason why that shot of Ben's hut was filmed at such a low angle:

Theres a reason why that shot of Ben's hut was filmed at such a low angle:

Thanks for these. I didn't know it was so close to the sea.

Well the last photo actually looks far better than the original shot in the film (except for the trash).