Ronster, it’s been a long time since I’ve encoded anything to DVD. But there is lots of freeware, you’ll probably know. Convertxtodvd I used to use. I watched the segments you uploaded, they were great. Personally I wouldn’t upscale. Perhaps leave it in the native quality and let people’s Tv’s do the upscaling. Many thanks for this great project.

This is the way I am feeling too… Leave it to hardware to upscale and keep the native resolution. I think this is the best solution I agree.

Quick update… Discovered a few flipped shots they have been flopped 😃

I also have tried a DVDlab version (maybe Pro?) about 10 years ago. At the time, I think it was one of the better ones, but the user interface wasn’t as friendly as DVD Architect Studio from memory. I noticed that the current layout looks very similar to the Vegas flow that DVD Architect Studio is part of. I don’t think I ever completed a project using it.

Whatever I choose to use It will be extremely basic and totally bare bones.

I have little desire for anything complicated and loads of menus and stuff.

I might model it to be similar to an old VHS that just plays but has chapters as a bonus to skip to a scene that is all i am planning for. There will be no subtitle track unless somone cares to create one.

But cheers for the info I need one that will create DVD9 anyway.

Created a DVD Start Screen Loop Based on the !973 Premiere at Mann’s Chinese Theatre… Hope you like it!

I was reading about how the last avatar anime was up-scaled to 720p and colour-corrected, but I have not figured out how to do it myself.

Or even Neat Video stand-alone or video edit plug-in can be used for
up-scaling and some digital noise reduction.

And then there is AVCHDcoder for simple BD menu-making of HD video and
audio.

Anime is quite different to real footage but the best thing I think I can do is release what I have done and if someone who is more talented than myself can further improve on it or cares too… Then that would be fine by me.

just doing some final tweaks to it… Not much left to be done at all.

I don’t really want to digitally scrub the film clean either only color correct it and sort the contrast out which is 99.99% done practically. I am pleased with it.

Thanks for Linking to AVCHDCoder looks quite good…

Made another astonishing discovery… Williams Vs Han.

In the sequence inside the office although there were 2 small snippets of footage missing from it, what I also have discovered is that the shots were re-arranged including the music and sound effects with the subsequent re-arrangement that took place or editing goofs. There was also a shot that was flipped that should not have been flipped.

This has all been re-edited and for me it was a very nice find and it’s like watching the film properly for the first time now it’s in the right order.

I liked it so much, I want to share the clip for history sake and to log the editing goof in public. I will keep the mirror maze under wraps though until releasing the edit.

Audio wise there is 4 edits.
1.Han says today instead of yesterday matches his lips too.
2.Missing Foley when Han swipes one of his own guards
3.Han shout from the Hong Kong Trailer Mono Sound mix when he knocks williams through the wall which can’t be found on the Mandarin or Cantonese mixes.
4.Added missing Base frequencies to Disco Room

clip below and please tell me what you think if you have any thoughts on it.

Nice! It’s much better than the one in the comparison clip and I like how you incorporated some of the missing footage in there.

An editor with a dumb username

Thanks! I just think it is nice now that their positioning now makes sense. The footage flows better.

Ronster, this is incredible work, I only stumbled across it trying to find out who did Parsons infamous voiceover 😃

I remembered some scenes in Game of Death II were clearly taken from Enter the Dragon, but had no idea there were so many subtle differences and cuts out there, other than the UK’s version missing the nunchuck fight. The Williams fight scene with Han that you’ve put together is outstanding. I hope you eventually re-release this in parts again like you did long ago, but wanted to let you know that I have the original 70’s OST on vinyl if you needed any of it 😃

Thanks for the Kind words, I really ought to finish this off once and for all!

Some Reference Photos of some further Deleted Scenes. Williams was gifted the record Deck and Headphones by Han the Picture Above the Record Deck is never seen in the film although the “Black Power” Painting is shown. Bruce was Gifted The Book he had written, Roper was Given a Bottle of Fine scotch whiskey. Bruce Performing a Kick to a Guard after the Dog Alerts the Guards in the Palace Grounds. Betty Chung Stabbing the Guard in the neck with the Dart Bruce Gives back to her. Don’t forget Mei Ling was an undercover operative on the Island… When Han and Roper first Enter the Museum… Are we Seeing Betty Chung (Mei Ling) POV of the scene. She was meant to be in the Museum and Hides… Was this Ropers Final Blow to Bolo? He is holding his hands near his nuts 😃 This is a Deleted Scene that comes after the Cave Fight… Roper Wishes to Run Away with Tania but whilst she Seduces Roper She pulls away and gives him a reality check that he will never go anywhere without Han’s permission. This comes Before Mr. Braithwaite is awoken with the F.A.D.E. Organization Message and a reluctant Roper that Han is waiting impatiently for on the tournament field. The Pic on the Left is Williams Room again containing the Jimi Hendrix Painting another gift from Han… I suppose Roper got his Bottle of Scotch 😃

Bruce Lee with a Slashed Leg… A missing attack from the Mirror maze… Rumour has it that a piece of Footage can be found on the Super 8mm version of Enter the Dragon of Han Going for Bruce’s Leg but then it is edited with the Side Kick (Actually Roundhouse Kick) but this would be Bruce sustaining yet another Injury.

Some Further scenes during the Cave fight have been mentioned of Bruce Kicking through a Window or Glass by a camera man who worked on the film. It would have to be the poor girl being doped up that called for help In my opinion. Certainly the Guard Strangled against the Bars of the Cell by the Old Men was removed.

“The longer cut would show Mr Lee continuing to fight Han’s guards down another cavern corridor, before finally being trapped by Han himself. Some of the shots/takes from this seqeunce, were supposed to have been filmed from above?. Maybe filmed from the point of view of Han’s character?. Who later looks down on Lee when he’s captured by the sliding vertical steel doors. Which actually lie at the end of another passage in the caverns. Rather than next to the underground water pit. Which is the impression viewers now get, thanks to the abrupt cut by Warner Brothers in post production. This remains yet another missing ETD fight scene, featuring its late dynamic star. There were other possible cuts made to the big cavern fight seqeunce, which I will looking into at a later point in the future.”

Notice the referee (Tournament Official Yellow & Black Armband) being Knocked out before the next opponent Is kicked Deleted scene.

“Besides, Han would never allow gun’s on the Island” Mr. Braithwaite

is this still being worked on?

I still have the project file but I am not doing anything with it.

But I will be restoring the Abbot scene audio at some point as a demonstration of how to for the benefit of showing a trick.

I played a bit with this movie and it can be improved by some scene reordering and trimming of Roper and Williams.
Basically:

Just putting this here because it works reasonably well and fits the existing footage.

I never re-arranged the flashbacks…

From the trailer the missing shot of Williams fixes the problem of Parsons walking around the Boat and scene issues there.

Yes Condense the nights to be 2 nights instead of 3 nights. The Gentle Softness music is removed and awful jump cuts. The key to this every time yesterday is said it should be “Today” as they dubbed yesterday over people mouthing or saying “Today”.

The order of the Tournament is as follows.

It seems that Betty Chung was meant to be sneaking about in the museum as Roper and Han walk in.

Then Betty and Bruce in the Room and Lee goes out one more time and get’s captured I placed this between Roper being thrown by Han’s Daughters and the Opium den scene.

Could you please upload the project files so someone else could work on it?

Basically because I created a version 2 the bit whete Han is on the throne has a messed up audio bit and I also need to restore the drum cue. That is all that “needs doing” but I may have also found a way to do the Monk scene also.

Give me a bit of time… Things are a bit stressful at the moment and although a bit of video editing is a nice bit of escapisim. Shit is hitting the fan, so you will need to be patient.

Enter the dragon Special Edition & Theatrical is now out 😄

Enter the dragon Special Edition & Theatrical is now out 😄

Ah… Well a man contacted me about the audio for the Monk Scene and the Audio for Bruce Lee’s voice.

I tried to explain a way to do it so you could put Bruce Lee’s voice back by an edit as all the dialogue is not available.

It’s also why I made the long post about the deleted scenes because they were hoping to get access to the archival reels or OCN and any other sound sources because of the differences in sound effects in the dubs and missing sound effects.

So It was somebody from criterion sniffing about for info although he did say although he was a big fan he could not influence any deciscions he could and would pass the information on.

The main thing was the Bruce Lee dialogue on the Monk scene but I told them about quite a lot of other stuff I had noticed but it looks like it never went further than an enquiry and an idea and no archival extra material or sound from Golden Harvest vault. 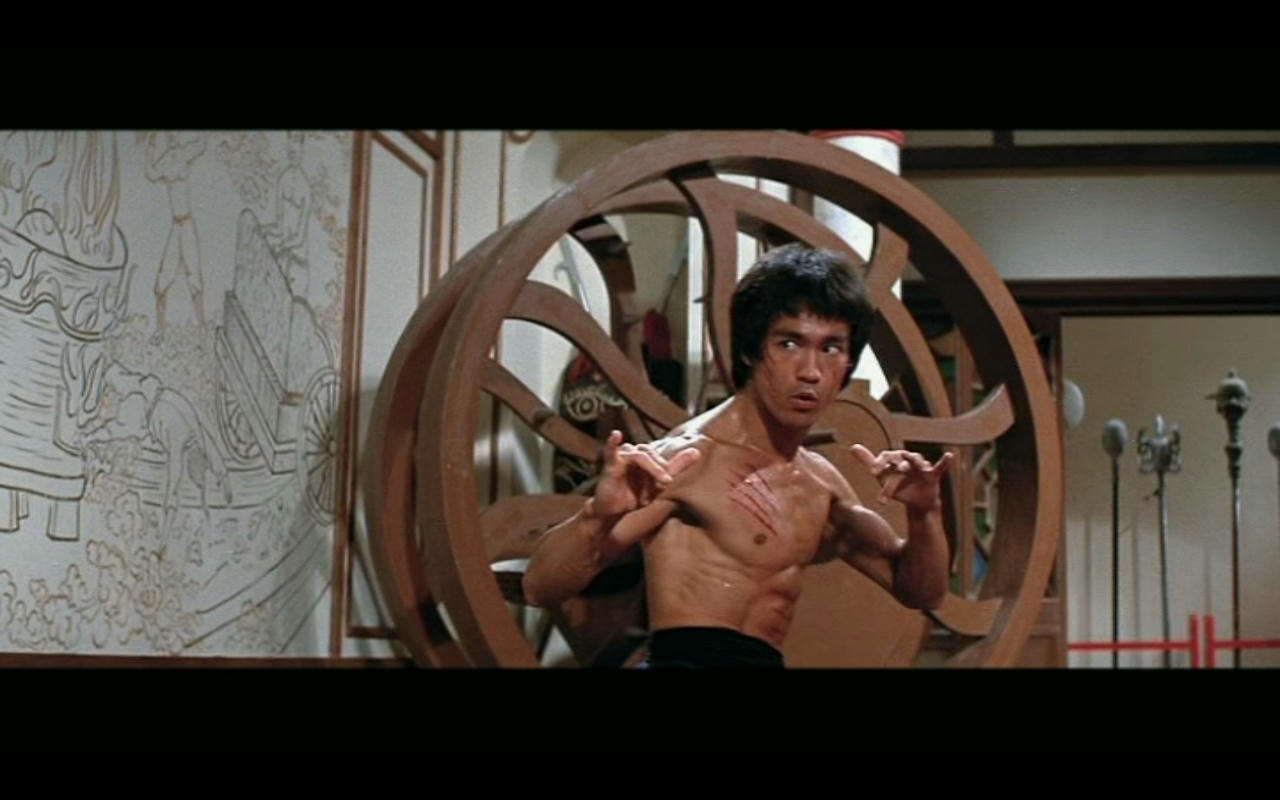 not too shabby my attempt 😃 I am available for Hire Thanks.