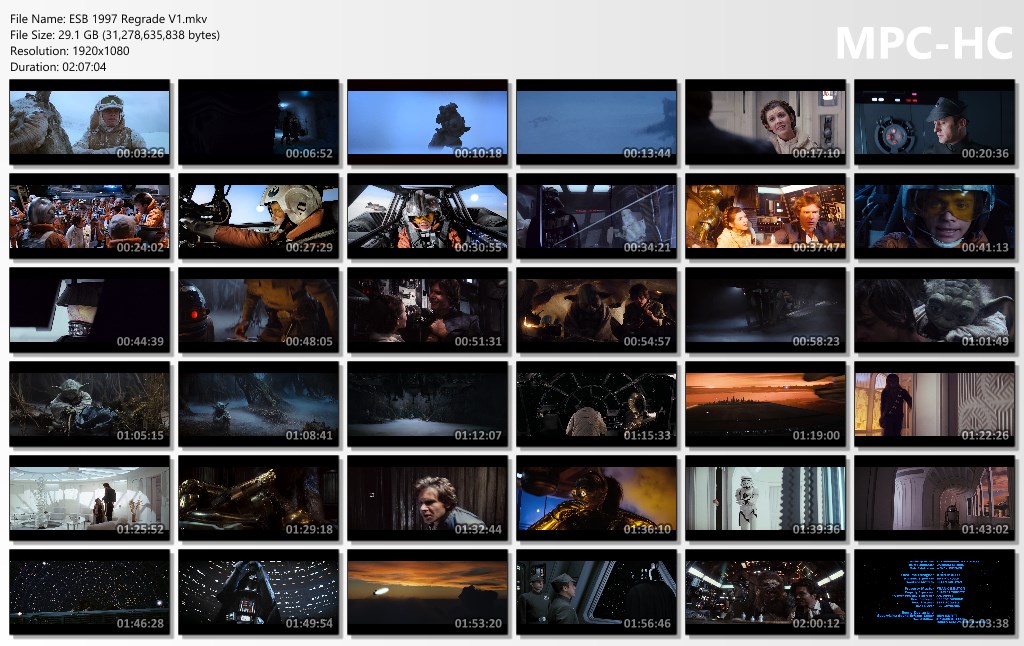 Much like my 97 ANH Regrade (Link here if you’re interested in that: https://originaltrilogy.com/topic/anh-1997-inspired-regrade-with-se-soundmix-version-2-released/id/80173), this is a regrade of Empire Strikes Back that is intended to be close as possible to the '97 laserdisc version of the film. Originally I had chosen to recapture the laserdisc color timing simply because there weren’t any reliable sources to use for capturing the film’s theatrical look. Now I realize in recent months that a new scan is being done and we’ll all be able to know once and for all what the film looked like in theatres. Regardless, I still think this regrade has it’s place since it’s still a version of ESB that hasn’t seen the light of day past laserdisc and therefore should be brought as close as possible into an HD Reconstruction.

Along with the regraded colors, the 1997 Theatrical Audio will be included and the only SE alterations that will be present are the ones exclusive to the '97 version, which means the original emperor will remain in place. The only post 1997 change that will remain is the cropping effect applied to some of the Millenium Falcon cockpit shots.

Here’s some video samples of the cut so far:
-Battle of Hoth: https://youtu.be/tqNrUx2LlUQ

Things to do for Version 2:
Dear god The Battle of Hoth is kicking my ass. The 2020 blu ray colors are so vastly different from the laserdisc that it takes forever to get a single shot to look anything like it did in '97. I even tried using Dre’s color match tool and even then I had problems. Noise and artifacts were being introduced into many shots even after cropping and aligning the images perfectly. I was able to get the first half of the battle color matched, but couldn’t get anything presentable out of the second half. To substitute the unfinished blu ray footage, I used Adywan’s 97 ESB footage. It’ll likely be obvious that it uses the HD 2004 broadcast footage, but it at least completes the scene for the time being.

The other thing I’m going to do is make further adjustments to make the colors match the Japanese laserdisc release. It has a much better color timing when compared to the US one and while the colors on the current version likely resemble the Japanese master to begin with, having a video reference on hand would help a lot.

I’m looking very forward to this. Will this have the 97 DTS track???

Yes! Wouldn’t be complete without it.

Just added a sample of the Battle of Hoth if anyone’s interested.

I didn’t see the SE in theaters, nor have I ever seen it on home video, but this looks good to me!

Looking forward to the full release.

Hey everybody. Sorry for the radio silence. I’ve been busy lately. Long story short, aside from making fan edits, I also make my own short films, host a podcast and do all sorts of things involved with the industry. Since things are beginning to look up in terms of job opportunities in my profession, I’ve been putting most of my time into getting prepared for the summer. Naturally, working on this project has been booted to the very bottom of my priority list. Not because I don’t enjoy working on it, but simply because I have more important things to worry about. Thankfully, because I don’t wanna leave things unfinished, I’ve put together a schedule during the week to improve progress. Things may be subject to change, but I plan on getting it out within the year. For those who have followed the project, thank you for the patience and stay tuned.

The grain structure on the 2004 HDTV rip looks pretty natural. I say go for it! You’re doing excellent work here 😃

following and looking forward to!

Have you tried using 35mm theatrical cut prints to undo changes made in 2004 or later, such as the Emperor scene? This would result in higher PQ than SDTV version of the 97SE.

Have you tried using 35mm theatrical cut prints to undo changes made in 2004 or later, such as the Emperor scene? This would result in higher PQ than SDTV version of the 97SE.

Not theatrical cuts, but I did use Adywan’s 1997 Reconstruction. Looking at laserdisc and tv captures, the coloring is pretty close to achieve the same look. Of course, it wouldn’t hurt to look for a good 35mm source. I really wanted to maintain the clean picture quality that the 2020 blu ray has since I’ve always felt these versions, alongside the the theatrical cuts, are deserving of such a visual treatment.

Ladies and gentlemen, version 1 is released.

Check the original post for an update on what I’ll need to tweak for version 2.