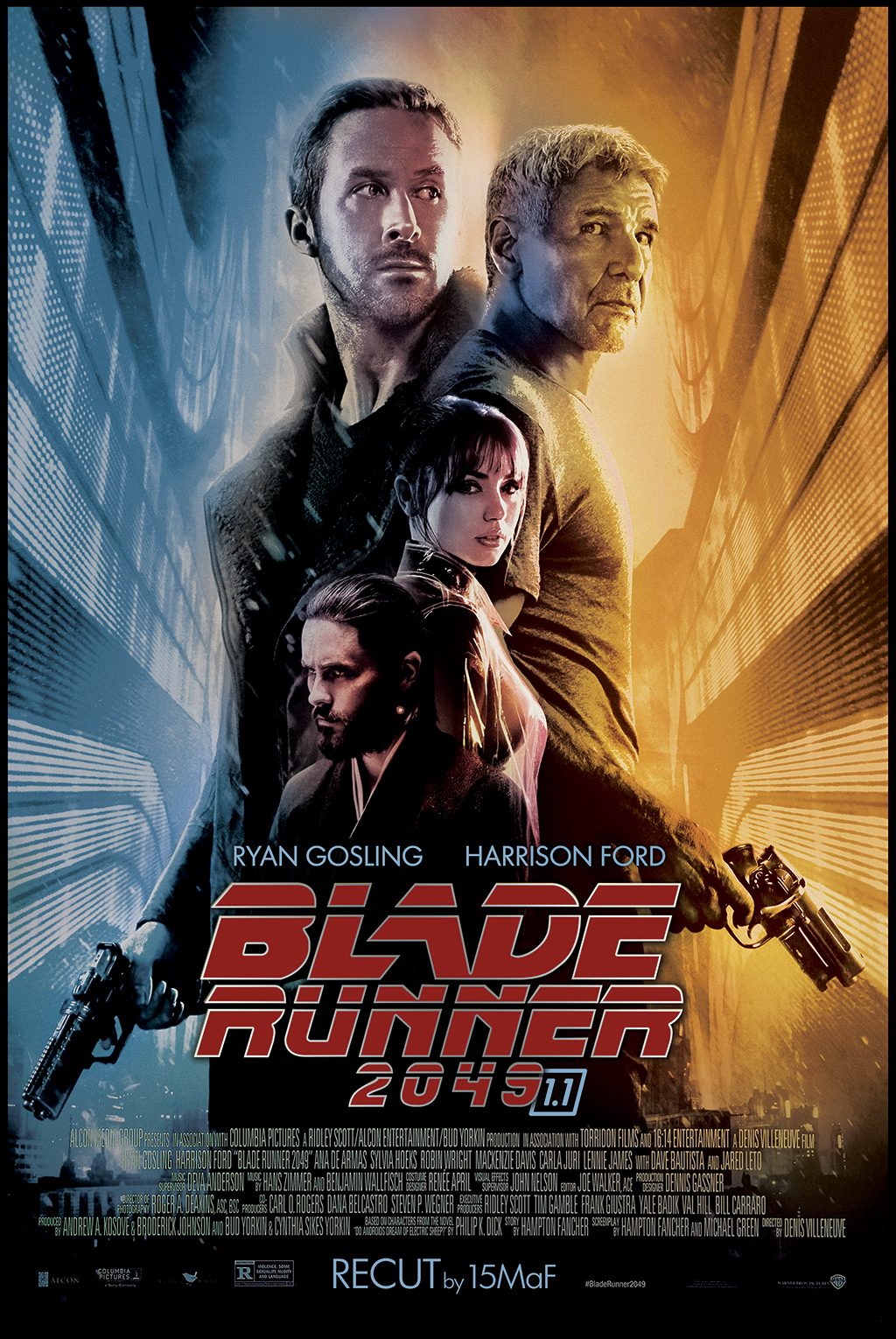 Got around to finishing this off lately. Still reviewing the grading at the moment as I’m getting banding in the very light and very dark gradients relating to the teal shades I’ve tried to minimize -  But that might be monitor/player setup as it is far less acute on one of the TVs I tested. It looks good on my main editing panel but I like to see how it travels. Plus there’s one or two cuts I’m still uncertain over.

There is a little tightening of some scenes, trimming of obvious and redundant dialogue here and there (keeping “pregnant”, removing “she was a replicant” etc) , removal of the Wallace Corporation Earth Headquarters on screen title etc. But most fundamentally I have removed the crappy hooker character Mariette. This was done to allow K the psychological and intellectual space to make sense of and accept the unfolding story along with the viewer as though he were, I dunno, the protagonist or something (sarcasm). Removing her also lends him the implicit intelligence to not need or be tempted by little more than an awkward nerd f**k that is simply not necessary to the plot. He has his waifu and he eventually realizes Joi’s emotional worth in spite of any kind of proxy consummation. If the physicality of sex meant the slightest thing to him, he wouldn’t invest in  the clearly pseudo companionship and theoretical precious nuances of Joi to start with - hookers are not hard to come by in any format - And for a replicant who very obviously is happy to accept his place in the world thus far, hookers are a crass and cheapening option that he actively passes up. The filmmakers’ alternate take on the sex bot is so obvious, that it was surely only put in the film for the sexless sci-fi fanboy to “relate to”. For K to go without such basic pursuits raises his character’s intellect and sincerity in the eyes of the viewer. Or for me anyway, considering the inevitable comparison to humans who would where he would not. Further to this though, was the fact that Mackenzie Davies is either a poor actress, was miscast or badly directed due to her character’s essential redundancy. So often we got that vapid blank stare in place of …something else she was supposed to be doing apparently. Once you push her into the background to blend in with the rest of the vague replicant “resistance” who follow and track K, you see that she need not be a point of focus at all, much less a spokesperson for spoon feeding minor details that don’t even really qualify as exposition even. Plus everyone else’s performances adjacent to K are also just so good and so fully realized - referring here to Robin Wright and Sylvia Hoek, who steal the show most of the time, and whose interaction with K are just far more compelling and consequential on every level. Luv is arguably the most interestingly fleshed out villain of that cinematic year - And in a time where female roles are being reduced to over simplified ideological cartoons, this was very encouraging. Her psychology was palpable and illustrated. It is why I kept all of Wallaces scenes as his psychopathy directly affects and relates to Luv’s experience and obligations as a character.

The other main change is grading. Much like the Final Cut the grading style to the majority of 2049 is very purposefully quite flat and over saturated, so I pulled the fogged highlights back out to restore the natural contrast balance in the image and I tried to match the original Blade Runner legacy grading so far as I could use my BR LUT settings as a start point. It is now far more neutral in tone, even if Blade Runner didn’t have any routine daylight scenes to use for comparison etc.

Other changes worth noting;
Tightened up the the first series of shots to be timed more precisely with the swell of the music and the eye shot now arrives just before we see Sapper. Film opens on transition into the dark sands approach.

Freysa no longer states Deckard’s child will be shown to the world and K’s response to the child’s gender is earlier, questioning the first time Freysa says “she” rather than letting her go on about she and her and taking exception too late.

K only tells Deckard he’s about to meet his daughter outside the upgrade facility rather than after they drag themselves from the sea.

Rachel’s clone only says “Did you miss me?”

Took out the orphans surrounding K like he was a savior.

*The fussy matte rebuilds and cropping and digital masking and footage re-timing that was used to remove Mariette are not listed in any cohesive detail here as I’ve been to sleep a few times since then, but folks will spot it all when they watch it I’m sure - especially if they liked those dead fish eyes of hers

I was not keen on the thinly veiled messiah trope in 2049 initially and besides, you just can’t take out the immaculate conception obviously, but on reflection it is more nuanced than I gave it credit for at my first viewing in the cinema. The well used cliche is shown from all angles and does present a study - It is portrayed by Lt. Joshi’s dialogue with cold realism, by Wallace and Luv’s psychotic narcissism, the replicant resistance’s focus on the religiosity of their symbolic rise from slavery etc. So to this end, Sappers talk of “a miracle” remains, as tempting as it is to remove a hammed up cliche, it does make sense that the young rogue replicant culture would become superstitious about it.

Ultimately K’s decision to not kill Deckard and take him to his daughter with humility illustrates the enlightened and personal view that defies the hyberbole of the rest of the story. Which is why I kept coming back to the film and finding worth in it.

This is now finished. Email me for info. 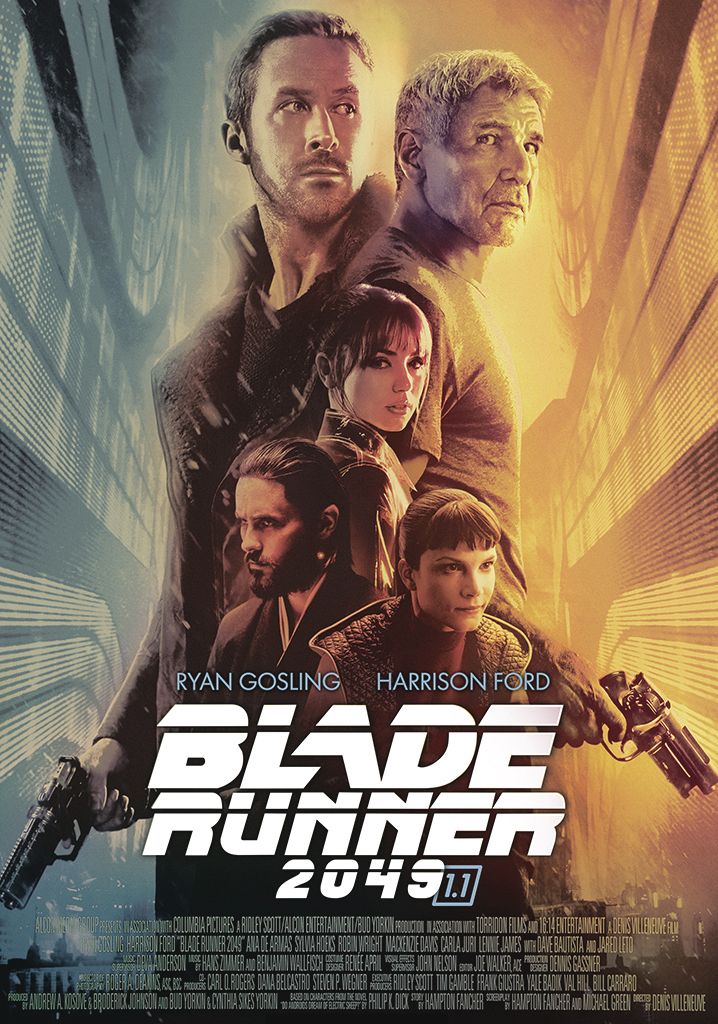 I buy blu ray soon and after ask for copy of Edit from 15MaF. it looks very good. thankyou.