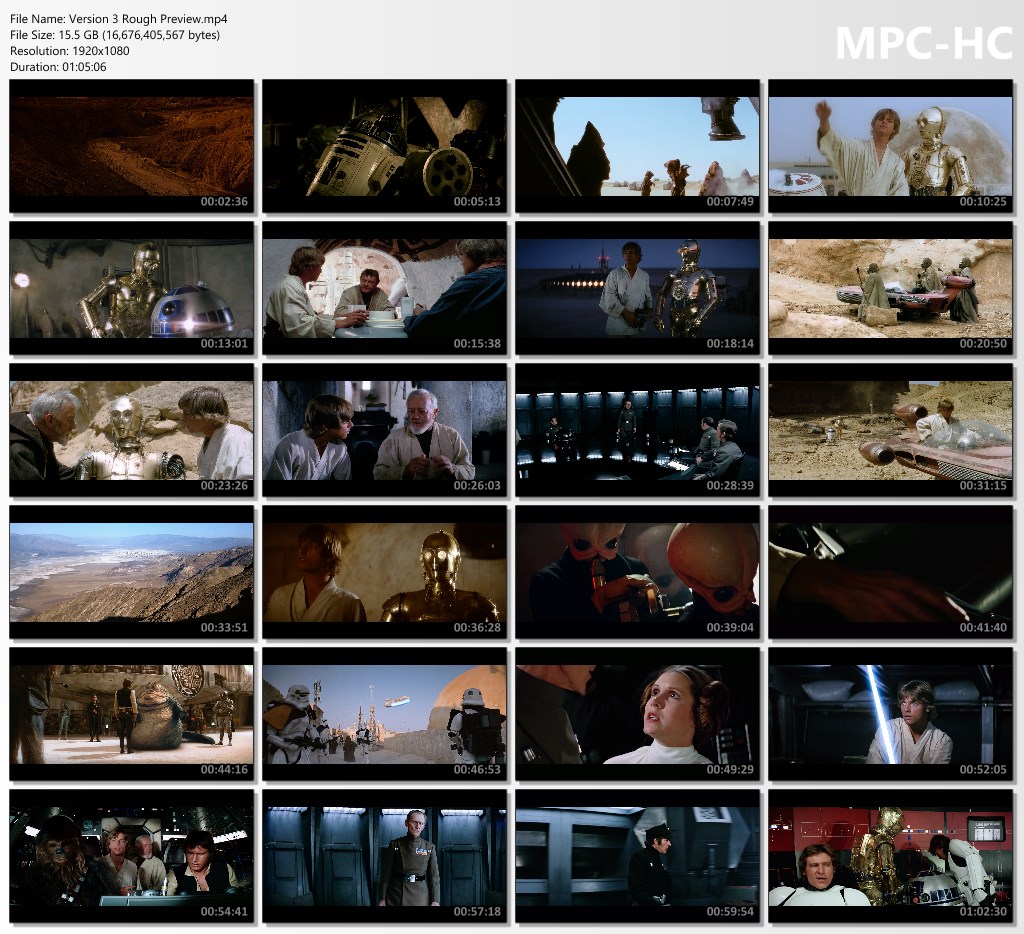 For those of you interested, I have rendered a rough preview of the regrade. I figured because of how long it’s been, I should share at least something. PM me if you would like to download it. It’s roughly 16gb, so it’s not that huge.

Keep in mind that this is going to be rough. While most shots are colormatched, there may be a few that don’t match up when returning to a previous camera angle. I plan on doing another pass through the timeline once I finished colormatching to Sanjuro’s color grade. There are going to be a few missing 97 exclusive shots that are missing due to the reference footage being offline when I exported. The cgi rocks are in front of R2 and Greedo shooting Han is missing entirely. I would have linked the footage backup, but since this is a rough preview, it doesn’t really matter.

Here’s another glimpse at some more Technicolor/97 goodness.
https://youtu.be/KnOhJHBC2jI

This looks so cool! May I have a link?

EDITS LIST:
Episode IV - THE HEIR OF SKYWALKER. Episode VI - RETURN OF THE JEDI RENEWED. DYAD IN THE FORCE (3-into-1 sequels).
PM me for links if interested.

Here’s another clip! I’ve been a little absent from working on the project, but I’m back at it.
https://youtu.be/9Zj_pclqc-w

Figured I’d give an update to the project. I’m currently color matching more of the blu ray to sanjuro’s 4k77 grade, but still have a ways to go. It’s going to be closer than previously due to having an improved color workflow. Dre’s color matcher was helpful, but it could only help so much. I was also limited at the time due to using Adobe Premiere rather than what I use now, Davinci Resolve. That and for as embarrassed as I am to admit it, the LUTS I generated for color matching are gone due to the drive I was working on crap out on me and not backing anything up. I’ve since taken better precautions to prevent that from happening in the future, but I’m still disappointed in myself for allowing that to happen.

On the brightside, using resolve has helped in getting the color matching to be even closer to Sanjuro’s grade and frankly takes WAY less time than exporting snapshots, cropping them to match perfectly, exporting the cropped shots, running them through Dre’s color matcher, and then bring the exported LUT into premiere (if the LUT even looks right to begin with). Resolve offers the kind of precision I need for this project. I’m planning on putting out a version 2.7 where a majority of the film is color matched and the remaining footage is “sort of close” color matched. Version 3 will eventually happen, but considering my commitments outside of fan edits as well as wanting to put some more focus on 1997 regrades of ESB and ROTJ, that will come later. Version 2.7 will also have the Authentic and Semi-Authentic options I hap previously mentioned. It will also include the Dolby TrueHD mixdown I was working awhile back.

I’ll have some sample clips up rather soon, so stay tuned.

This looks very promising, i will be interested in a link when your v3 is finished ( semi authentic.)

The 3 things i don’t like with the 2020 version are the digital rock, the extra greedo line and the color grade so your project is exactly what i was looking for without knowing it could be a thing.

Those technical difficulties you had sound like a total pounding headache. Regardless, I hope everything works out for you with the rest your project. This is definitely looking pretty awesome judging from the updates that you’ve posted so far.

I’m definitely looking for to it! Along with another two films too. Though I understand those are going be awhile from now. Still I can’t wait!

Don’t fake the funk on a nasty dunk.