This is simply a great thread for the history of early Star Wars with so much to learn and think about! I really only enjoy early Star Wars, Visions and The Mandalorian from the films and TV so it pleasing to so many accomplished discussions on here.

I was having a disagreement with a friend about Jabba and his supposed design for the original Star Wars film in 1977. My friend had watched the 1983 “From Star Wars to Jedi The Making of a Saga” documentary, and in this it is stated by George that already had a design for Jabba; as a big slimy slug, ready for the use, in the 1977 film.

I pointed my friend to this thread, and many other threads on here, and my friend saw he was mistaken. We then sat down and watched the “From Star Wars to Jedi The Making of a Saga” documentary once again, and I can certainly see why my friend mistakenly thought that George did have such a design. George misled many people about this in the documentary:

George Lucas: “In the film Star Wars (1977), there was a scene with Jabba himself. He was always intended to be this loathsome large monstrous creature.”

The following image appears in the video, inferring that this image is George’s design of Jabba, at the time of making the original Star Wars film, in 1976: 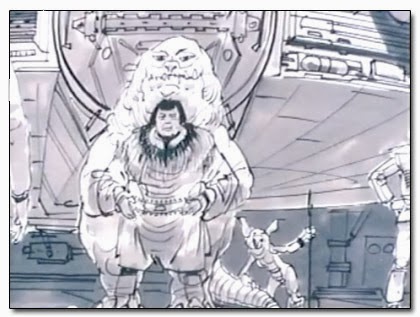 George Lucas continues: “But it wasn’t possible to incorporate my design of Jabba when we shot the scene with the actors on the set.”

We know this not to be true. The above image design for Jabba shown in this documentary is from 1981-82 - and not for the 1977 Star Wars film.

We know this because the image shown includes Salacious B Crumb behind Jabba. Salacious B Crumb was a creature invented, designed and sculpted for Return Of The Jedi, in 1981/82 by Tony McVey, as talked about in this article on the official Star Wars website:

StarWars.com: “The legend I have heard, Tony, is that you came up with the original in a night. He was going to be this little creature sitting on the shoulder of a background alien. And then everyone just fell head over heels for him and he became Jabba’s little guy. And then, of course, Tim Rose made him this unforgettable screeching thing. So I’d love to hear some of your recollections, both from working on the original, but then also taking that expertise and bringing it into this sculpt.”

Tony McVey: “OK, well, let’s see if I can remember that far back. Phil Tippett came to me one day in the middle of the 11 months I was working on this project [Return Of The Jedi], and he said, “We need a little pet character for one of the background of aliens.” It was for Ephant Mon, which I also worked on. “We need a little pet for this guy. Can you come up with something?” So I went home that night and I scribbled something on a piece of paper. It’s a cross between a parrot and a monkey. And I brought it back the next day and I showed it to him. He said, “OK, go ahead and make that.” It was as simple as that. There’s nothing to it. Just a little background monkey character.”

When George lies or misleads people this way, it is easy to see why some people fall for George’s false history and claims, and mistakenly take them as being fact or true.