Yeah , the Legends/canon debate never really bothered me as I remember when the original Marvel comics were kind of dismissed in the 90s and not considered worthy of " Canon " status , and then a decade or so later , they were incorporated into the EU novels and comics etc . Plus , you have the fact that though George didn’t see the EU material as part of his universe , he still often cherry picked from it , from the prequels to the clone wars and even to his sequel trilogy treatments . Which is what the current iteration of Lucasfilm under Disney has been doing a lot of as well .So I see that as relevant to this threads title . I have been making the point ,often ,as well , that the legends material is still in print and yes , a lot of it is even being re issued with newly commissioned cover art .A lot of people act like those stories were wiped from existence when that is clearly not the case .The way I see it ,with everything out there , anyone is free to follow one or the other or even mix and match to suit their tastes where it fits . There’s something for everyone and I will never complain about it . I just read/watch what I like and ignore the rest . I remember the dark times , from about 1986 to 1991 when there was hardly any Star Wars material available .

That’s a good way of approaching it. Star Wars is like a buffet. You enjoy what you like and leave the rest for others. It’s not really worth it to get caught up in which stories are canon or not, since they’re all works of fiction, anyway. The old EU’s “softer” approach to canon, with the different tiers and all that, was more supportive of that “buffet” mindset, since you could take or leave individual stories based on what you preferred. Disney canon is more monolithic by comparison, though that may be starting to change now with stuff like Visions and the KOTOR remake.

yup , it is like a buffet , and with the current canon , I also take or leave individual stories based on what I prefer ,as I do with the old EU .

I fully agree. If only more fans thought along this way, instead of being beholden to what George, or someone at Lucasfilm or Disney says or thinks.

As this thread highlights, these people in power have a highly selective and evolving relationship with the truth and history of Star Wars. Even to the point of trying to retcon or devalue our memories, via changes to ‘canon’, or ‘legends’, or ‘EU’. Or other labels used to categorize certain previous official or licensed content as being less important, and there is a new story or version to replace it.

The following from George explains everything:

"Everybody said, “Oh, well, there was a war between the Jedi and the Sith.” Well, that never happened. That’s just made up by fans or somebody. What really happened is, the Sith ruled the universe for a while, 2,000 years ago.

No, it really doesn’t explain everything. This is quite the shitty and ungracious thing when George talks like this. As if his vision is the only one that matters to everyone. And also plays down the contributions of others to the Star Wars Universe.

The “Well, that never happened. That’s just made up by fans or somebody” did actually happen, in the EU. The Jedi-Sith War is part the Darth Bane trilogy of books, the first books to focus on Darth Bane. 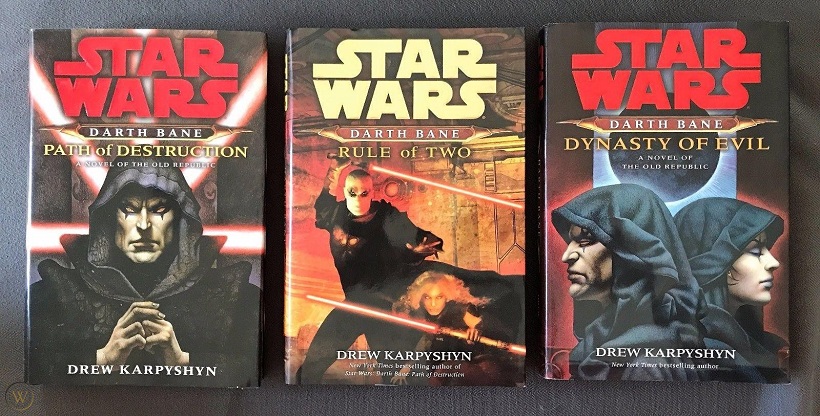 Even the official Star Wars website hints at a Jedi-Sith War in the “databank” for Darth Bane:

“After the Sith were decimated by the Jedi Knights of a thousand years ago, Bane enacted the Sith rule of two: there would be only two active Sith at one time – a Dark Lord to embody the power, and an apprentice to crave it.”

In canon, in the 2017-18 “Age of Republic - Darth Maul” comics, it is revealed there was a huge battle around 1000 years ago, between the Jedi and Sith on Malachor, a place where a huge amount of Sith died.

Sidious: “It was here on this dead world that the Jedi struck a terrible blow against the Sith. Many of our order were struck down. All because they wanted to be free.”

This also gave reason for Maul to believe that the Sith deserved revenge for their slaughter at the hands of the Jedi.

Thankfully, there are more things on heaven and earth, Horatio George, than are dreamt of in your retconned philosophy.

Edit: About George’s plans for his new version of the Sequel Trilogy (just one of many over the years for the ST, including there not being any ST at all):

Greetings all! It’s been awhile. Further details of George’s Sequels leaked from the upcoming book “The Star Wars Archives: 1999-2005”.

Here George gives a greater context to the story of the trilogy he wanted to tell beyond what we’ve heard with regards to the Whills, Luke being in exile to find his spark again in Episode VII, and the son of Han and Leia falling to the Dark Side.

George Lucas: "Darth Maul trained a girl, Darth Talon, who was in the comic books as his apprentice. She was the new Darth Vader, and most of the action was with her. So these were the two main villains of the trilogy. Maul eventually becomes the godfather of crime in the universe because, as the Empire falls, he takes over.

The movies are about how Leia—I mean, who else is going to be the leader?—is trying to build the Republic. They still have the apparatus of the Republic but they have to get it under control from the gangsters. That was the main story.

It starts out a few years after Return of the Jedi and we establish pretty quickly that there’s this underworld, there are these offshoot stormtroopers who started their own planets, and that Luke is trying to restart the Jedi. He puts the word out, so out of 100,000 Jedi, maybe 50 or 100 are left. The Jedi have to grow again from scratch, so Luke has to find two- and three-year-olds, and train them. It’ll be 20 years before you have a new generation of Jedi.

By the end of the trilogy Luke would have rebuilt much of the Jedi, and we would have the renewal of the New Republic, with Leia, Senator Organa, becoming the Supreme Chancellor in charge of everything. So she ended up being the Chosen One."

SparkySywer sums up the issue of this would-be retcon by George in having Leia now being the Chosen One, instead of Anakin:

He [George Lucas] describes Anakin as a very straightforward Chosen One who does defeat the Sith and bring balance to the Force in RotJ, at least until he changed his mind and decided Leia was the Chosen One, except not because he never ended up making that ST.