I am not familiar with my fair lady’s releases (I have never even seen my fair lady). So I can not understand the comparison, can you please explain for me.

Nothing much to explain – you offered two examples of films that had been butchered or at least abused on UHD. My Fair Lady is just an example of a film that had been treated very respectfully. They still went back to earlier-than-projection-print elements, and so the UHD has more fine detail than the projection prints ever did – and considering it was a 65mm film, that’s really saying something!

I was not saying that all official releases are subpar quality, stuff like the birds and doctor Strangelove or how I learned to stop worrying and love the bomb look beautiful. The camera negatives do show much more detail, just as soon as DNR is in play they show less detail.

Right, but as we see with Despecialized, even if you take a subpar scan of a more detailed source, DNR the crap out of it, and downscale it to 720p, it still can show more image detail than a pristine projection print scanned at 4K. A lot less detail than the negative is often still more detail than a projection print. Yes, for this to be true, the amount of detail lost by generations of optical duplication would have to be staggering – and it is. 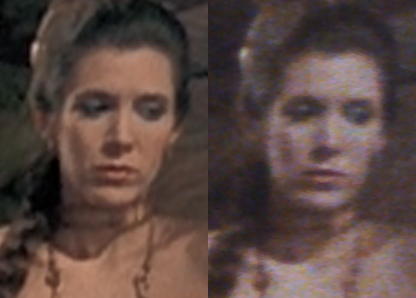 Now don’t get me wrong. The image on the left (Despecialized scaled up to 4K) has all sorts of issues: objectively shitty scan, DNR, edge enhancement, some banding (some of this possibly exaggerated/introduced by the upscale), and of course any fine image detail above 720p is just plain gone. Not perfection in the least, and I could see how a person could reasonably prefer either of the images (because bears). But Despecialized definitely, without any doubt at all, in spite of its many other faults, still has more fine image detail than 4K83 at 4K on the right. And 4K83 is the special unicorn print with much more fine image detail than 4K77.